The Megace brand name has been discontinued in the U.S. If generic versions of this product have been approved by the FDA, there may be generic equivalents available.

Megace® (megestrol acetate tablets, USP) is a synthetic, antineoplastic and progestational drug. Megestrol acetate is a white, crystalline solid chemically designated as 17α-acetyloxy-6-methylpregna-4,6-diene-3,20-dione. Solubility at 37° C in water is 2 mcg per mL, solubility in plasma is 24 mcg per mL. Its molecular weight is 384.51. The empirical formula is C24H32O4 and the structural formula is represented as follows: 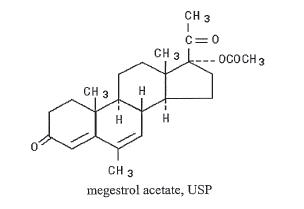 While the precise mechanism by which Megace produces its antineoplastic effects against endometrial carcinoma is unknown at the present time, inhibition of pituitary gonadotrophin production and resultant decrease in estrogen secretion may be factors. There is evidence to suggest a local effect as a result of the marked changes brought about by the direct instillation of progestational agents into the endometrial cavity. The antineoplastic action of megestrol acetate on carcinoma of the breast is effected by modifying the action of other steroid hormones and by exerting a direct cytotoxic effect on tumor cells. In metastatic cancer, hormone receptors may be present in some tissues but not others. The receptor mechanism is a cyclic process whereby estrogen produced by the ovaries enters the target cell, forms a complex with cytoplasmic receptor and is transported into the cell nucleus. There it induces gene transcription and leads to the alteration of normal cell functions. Pharmacologic doses of megestrol acetate not only decrease the number of hormone-dependent human breast cancer cells but also are capable of modifying and abolishing the stimulatory effects of estrogen on these cells. It has been suggested that progestins may inhibit in one of two ways: by interfering with either the stability, availability, or turnover of the estrogen receptor complex in its interaction with genes or in conjunction with the progestin receptor complex, by interacting directly with the genome to turn off specific estrogen-responsive genes.

There are several analytical methods used to estimate Megace plasma levels, including mass fragmentography, gas chromatography (GC), high pressure liquid chromatography (HPLC) and radioimmunoassay. The plasma levels by HPLC assay or radioimmunoassay methods are about one-sixth those obtained by the GC method. The plasma levels are dependent not only on the method used, but also on intestinal and hepatic inactivation of the drug, which may be affected by factors such as intestinal tract motility, intestinal bacteria, antibiotics administered, body weight, diet, and liver function.

Metabolites account for only 5% to 8% of the administered dose and are considered negligible. The major route of drug elimination in humans is the urine. When radiolabeled megestrol acetate was administered to humans in doses of 4 to 90 mg, the urinary excretion within 10 days ranged from 56.5% to 78.4% (mean 66.4%) and fecal excretion ranged from 7.7% to 30.3% (mean 19.8%). The total recovered radioactivity varied between 83.1% and 94.7% (mean 86.2%). Respiratory excretion as labeled carbon dioxide and fat storage may have accounted for at least part of the radioactivity not found in the urine and feces.

In normal male volunteers (n=23) who received 160 mg of megestrol acetate given as a 40 mg q.i.d. regimen, the oral absorption of Megace appeared to be variable. Plasma levels were assayed by a high pressure liquid chromatographic (HPLC) procedure. Peak drug levels for the first 40 mg dose ranged from 10 to 56 ng/mL (mean 27.6 ng/mL) and the times to peak concentrations ranged from 1.0 to 3.0 hours (mean 2.2 hours). Plasma elimination half-life ranged from 13.0 to 104.9 hours (mean 34.2 hours). The steady state plasma concentrations for a 40 mg q.i.d. regimen have not been established.

Indications and Usage for Megace

Megace is indicated for the palliative treatment of advanced carcinoma of the breast or endometrium (i.e., recurrent, inoperable, or metastatic disease). It should not be used in lieu of currently accepted procedures such as surgery, radiation, or chemotherapy.

History of hypersensitivity to megestrol acetate or any component of the formulation.

Megestrol acetate may cause fetal harm when administered to a pregnant woman. Fertility and reproduction studies with high doses of megestrol acetate have shown a reversible feminizing effect on some male rat fetuses. There are no adequate and well-controlled studies in pregnant women. If this drug is used during pregnancy, or if the patient becomes pregnant while taking (receiving) this drug, the patient should be apprised of the potential hazard to the fetus. Women of childbearing potential should be advised to avoid becoming pregnant.

The use of Megace in other types of neoplastic disease is not recommended.

The glucocorticoid activity of Megace Tablets has not been fully evaluated. Clinical cases of new onset diabetes mellitus, exacerbation of preexisting diabetes mellitus, and overt Cushing’s syndrome have been reported in association with the chronic use of Megace. In addition, clinical cases of adrenal insufficiency have been observed in patients receiving or being withdrawn from chronic Megace therapy in the stressed and non-stressed state. Furthermore, adrenocorticotropin (ACTH) stimulation testing has revealed the frequent occurrence of asymptomatic pituitary-adrenal suppression in patients treated with chronic Megace therapy. Therefore, the possibility of adrenal insufficiency should be considered in any patient receiving or being withdrawn from chronic Megace therapy who presents with symptoms and/or signs suggestive of hypoadrenalism (e.g., hypotension, nausea, vomiting, dizziness, or weakness) in either the stressed or non-stressed state. Laboratory evaluation for adrenal insufficiency and consideration of replacement or stress doses of a rapidly acting glucocorticoid are strongly recommended in such patients. Failure to recognize inhibition of the hypothalamic-pituitary-adrenal axis may result in death. Finally, in patients who are receiving or being withdrawn from chronic Megace therapy, consideration should be given to the use of empiric therapy with stress doses of a rapidly acting glucocorticoid in conditions of stress or serious intercurrent illness (e.g., surgery, infection).

Close surveillance is indicated for any patient treated for recurrent or metastatic cancer. Use with caution in patients with a history of thromboembolic disease.

Exacerbation of preexisting diabetes with increased insulin requirements has been reported in association with the use of Megace.

Breast malignancies in which estrogen and/or progesterone receptors are positive are more likely to respond to Megace.

Administration of megestrol acetate to female dogs for up to 7 years is associated with an increased incidence of both benign and malignant tumors of the breast. Comparable studies in rats and studies in monkeys are not associated with an increased incidence of tumors. The relationship of the dog tumors to humans is unknown but should be considered in assessing the benefit-to-risk ratio when prescribing Megace and in surveillance of patients on therapy. (See WARNINGS section.)

Because of the potential for adverse effects on the newborn, nursing should be discontinued if Megace is required for treatment of cancer.

Insufficient data from clinical studies of Megace tablets are available for patients 65 years of age and older to determine whether they respond differently than younger patients. Other reported clinical experience has not identified differences in responses between elderly and younger patients. In general, dose selection for an elderly patient should be cautious, usually starting at the low end of the dosing range, reflecting the greater frequency of decreased hepatic, renal, or cardiac function, and of concomitant disease or other drug therapy.

Thromboembolic phenomena including thrombophlebitis and pulmonary embolism (in some cases fatal) have been reported.

No serious unexpected side effects have resulted from studies involving Megace administered in dosages as high as 1600 mg/day. Oral administration of large, single doses of megestrol acetate (5 g/kg) did not produce toxic effects in mice. Megestrol acetate has not been tested for dialyzability; however, due to its low solubility it is postulated that this would not be an effective means of treating overdose.

At least 2 months of continuous treatment is considered an adequate period for determining the efficacy of Megace.

How is Megace Supplied

Exposure or “overdose” at levels approaching recommended dosing levels could result in side effects described above (see WARNINGS and ADVERSE REACTIONS sections). Women at risk of pregnancy should avoid such exposure.