The Ionamin brand name has been discontinued in the U.S. If generic versions of this product have been approved by the FDA, there may be generic equivalents available.

Ionamin is a sympathomimetic amine with pharmacologic activity similar to the prototype drug of this class used in obesity, amphetamine (d- and dl-amphetamine). Actions include central nervous system stimulation and elevation of blood pressure. Tachyphylaxis and tolerance have been demonstrated with all drugs of this class in which these phenomena have been looked for.

Drugs of this class used in obesity are commonly known as “anorectics” or “anorexigenics.” It has not been established, however, that the action of such drugs in treating obesity is primarily one of appetite suppression. Other central nervous system actions, or metabolic effects may be involved.

Adult obese subjects instructed in dietary management and treated with “anorectic” drugs, lose more weight on the average than those treated with placebo and diet, as determined in relatively short-term clinical trials.

The magnitude of increased weight loss of drug-treated patients over placebo-treated patients is only a fraction of a pound a week. The rate of weight loss is greatest in the first weeks of therapy for both drug and placebo subjects and tends to decrease in succeeding weeks. The possible origins of the increased weight loss due to the various drug effects are not established. The amount of weight loss associated with the use of an “anorectic” drug varies from trial to trial, and the increased weight loss appears to be related in part to variables other than the drugs prescribed, such as the physician-investigator, the population treated, and the diet prescribed. Studies do not permit conclusions as to the relative importance of the drug and non-drug factors on weight loss.

The natural history of obesity is measured in years, whereas the studies cited are restricted to a few weeks’ or months’ duration; thus, the total impact of drug-induced weight loss over that of diet alone must be considered clinically limited.

The bioavailability of Ionamin has been studied in humans in which blood levels of phentermine were measured by a gas chromatography method. Blood levels obtained with the 15 mg and 30 mg resin complex formulations indicated slower absorption with a reduced but prolonged peak concentration and without a significant difference in prolongation of blood levels when compared with the same doses of phentermine hydrochloride. The clinical significance of these differences is not known. In clinical trials establishing the efficacy of Ionamin, a single daily dose produced an effect comparable to that produced by other regimens of “anorectic” drug therapy.

Ionamin Capsules are indicated as a short-term (a few weeks) adjunct in a regimen of weight reduction based on exercise, behavioral modification, and caloric restriction in the management of exogenous obesity for patients with an initial body mass index ≥30 kg/m2, or ≥27 kg/m2 in the presence of other risk factors (e.g., hypertension, diabetes, hyperlipidemia).

Below is a chart of Body Mass Index (BMI) based on various heights and weights.

BMI is calculated by taking the patient’s weight, in kilograms (kg), divided by the patient’s height, in meters (m), squared. Metric conversions are as follows: pounds ÷ 2.2 = kg; inches x 0.0254 = meters.

The limited usefulness of agents of this class (see ACTIONS) should be measured against possible risk factors inherent in their use such as those described below.

During or within 14 days following the administration of monoamine oxidase inhibitors (hypertensive crises may result).

Ionamin Capsules are indicated only as short-term monotherapy for the management of exogenous obesity. The safety and efficacy of combination therapy with phentermine and any other drug products for weight loss, including selective serotonin reuptake inhibitors (e.g., fluoxetine, sertraline, fluvoxamine, paroxetine), have not been established. Therefore, the coadministration of these drug products for weight loss is not recommended.

Primary Pulmonary Hypertension (PPH) – a rare, frequently fatal disease of the lungs – has been reported to occur in patients receiving a combination of phentermine with fenfluramine or dexfenfluramine. The possibility of an association between PPH and the use of phentermine alone cannot be ruled out. The initial symptom of PPH is usually dyspnea. Other initial symptoms include: angina pectoris, syncope, or lower extremity edema. Patients should be advised to report immediately any deterioration in exercise tolerance. Treatment should be discontinued in patients who develop new, unexplained symptoms of dyspnea, angina pectoris, syncope, or lower extremity edema.

Serious regurgitant cardiac valvular disease, primarily affecting the mitral, aortic and/or tricuspid valves, has been reported in otherwise healthy persons who had taken a combination of phentermine with fenfluramine or dexfenfluramine for weight loss. The etiology of these valvulopathies has not been established and their course in individuals after the drugs are stopped is not known.

If tolerance to the “anorectic” effect develops, the recommended dose should not be exceeded in an attempt to increase the effect: rather, the drug should be discontinued.

Ionamin may impair the ability of the patient to engage in potentially hazardous activities such as operating machinery or driving a motor vehicle; the patient should therefore be cautioned accordingly.

When using CNS active agents, consideration must always be given to the possibility of adverse interactions with alcohol.

Ionamin is related chemically and pharmacologically to amphetamine (d- and dl-amphetamine) and other stimulant drugs that have been extensively abused. The possibility of abuse of Ionamin should be kept in mind when evaluating the desirability of including a drug as part of a weight reduction program. Abuse of amphetamine (d- and dl-amphetamine) and related drugs may be associated with intense psychological dependence and severe social dysfunction. There are reports of patients who have increased the dosage of some of these drugs to many times that recommended. Abrupt cessation following prolonged high dosage administration results in extreme fatigue and mental depression; changes are also noted on the sleep EEG. Manifestations of chronic intoxication with anorectic drugs include severe dermatoses, marked insomnia, irritability, hyperactivity, and personality changes. The most severe manifestation of chronic intoxications is psychosis, often clinically indistinguishable from schizophrenia.

Safe use in pregnancy has not been established. Use of Ionamin by women who are or may become pregnant requires that the potential benefit be weighed against the possible hazard to mother and infant.

Ionamin Capsules (phentermine resin) are not recommended for use in pediatric patients under 16 years of age.

Caution is to be exercised in prescribing Ionamin for patients with even mild hypertension. Insulin requirements in diabetes mellitus may be altered in association with the use of Ionamin and the concomitant dietary regimen.

Clinical studies of Ionamin did not include sufficient numbers of subjects aged 65 or over to determine whether they respond differently from younger subjects. Other reported clinical experience has not identified differences in responses between the elderly and younger patients. In general, dose selection for an elderly patient should be cautious, usually starting at the low end of the dosing range, reflecting the greater frequency of decreased hepatic, renal, or cardiac function, and of concomitant disease or other drug therapy.

One capsule daily, before breakfast or 10-14 hours before retiring. For individuals exhibiting greater drug responsiveness, Ionamin ‘15’ will usually suffice. Ionamin ‘30’ is recommended for less responsive patients. Ionamin is not recommended for use in pediatric patients under 16 years of age.

Ionamin Capsules should be swallowed whole.

Management of acute Ionamin intoxication is largely symptomatic and includes lavage and sedation with a barbiturate. Experience with hemodialysis or peritoneal dialysis is inadequate to permit recommendation in this regard. Intravenous phentolamine (Regitine) has been suggested on pharmacologic grounds for possible acute, severe hypertension, if this complicates overdosage.

How is Ionamin Supplied 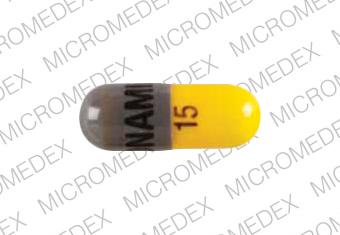