Each tablet for oral use contains ergoloid mesylates USP; a mixture of the methanesulfonate salt of the following hydrogenated alkaloids:

There is no specific evidence which clearly establishes the mechanism by which ergoloid mesylates preparations produce mental effects, nor is there conclusive evidence that the drug particularly affects cerebral arteriosclerosis or cerebrovascular insufficiency.

Pharmacokinetic studies have been performed in normal volunteers with the help of radiolabelled drug as well as employing a specific radioimmunoassay technique. From the urinary excretion quotient of orally and intravenously administered tritium-labelled ergoloid mesylates the absorption of ergoloid was calculated to be 25%. Following oral administration, peak levels of 0.5 ngEq/mL/mg were achieved within 1.5–3 hr. Bioavailability studies with the specific radioimmunoassay confirm that ergoloid is rapidly absorbed from the gastrointestinal tract, with mean peak levels of 0.05–0.13 ng/mL/mg (with extremes of 0.03 and 0.18 ng/mL/mg) achieved within 0.6–1.3 hr (with extremes of 0.4 and 2.8 hr). The finding of lower peak levels of ergoloid compared to the total drug-metabolite composite is consistent with a considerable first pass liver metabolism, with less than 50% of the therapeutic moiety reaching the systemic circulation. The elimination of radioactivity, representing ergoloid plus metabolites bearing the radiolabel, was biphasic with half-lives of 4 and 13 hr. The mean half-life of unchanged ergoloid in plasma is about 2.6–5.1 hr; after 3 half-lives ergoloid plasma levels are less than 10% of radioactivity levels, and by 24 hr no ergoloid is detectable.

A proportion of individuals over sixty who manifest signs and symptoms of an idiopathic decline in mental capacity (i.e., cognitive and interpersonal skills, mood, self-care, apparent motivation) can experience some symptomatic relief upon treatment with ergoloid mesylates preparations. The identity of the specific trait(s) or condition(s), if any, which would usefully predict a response to ergoloid mesylates therapy is not known. It appears, however, that those individuals who do respond come from groups of patients who would be considered clinically to suffer from some ill-defined process related to aging or to have some underlying dementing condition (i.e., primary progressive dementia, Alzheimer's dementia, senile onset, multi-infarct dementia).

Before prescribing ergoloid mesylates, the physician should exclude the possibility that the patient's signs and symptoms arise from a potentially reversible and treatable condition. Particular care should be taken to exclude delirium and dementiform illness secondary to systemic disease, primary neurological disease, or primary disturbance of mood. Ergoloid mesylates preparations are not indicated in the treatment of acute or chronic psychosis, regardless of etiology (see CONTRAINDICATIONS).

The decision to use ergoloid mesylates in the treatment of an individual with a symptomatic decline in mental capacity of unknown etiology should be continually reviewed since the presenting clinical picture may subsequently evolve sufficiently to allow a specific diagnosis and a specific alternative treatment. In addition, continued clinical evaluation is required to determine whether any initial benefit conferred by ergoloid mesylates therapy persists with time.

The efficacy of ergoloid mesylates was evaluated using a special rating scale known as the SCAG (Sandoz Clinical Assessment-Geriatric). The specific items on this scale on which modest but statistically significant changes were observed at the end of twelve weeks include: mental alertness, confusion, recent memory, orientation, emotional lability, self-care, depression, anxiety/fears, cooperation, sociability, appetite, dizziness, fatigue, bothersome(ness), and an overall impression of clinical status.

Practitioners are advised that because the target symptoms are of unknown etiology, careful diagnosis should be attempted before prescribing ergoloid mesylates preparations.

Alleviation of symptoms is usually gradual and results may not be observed for 3–4 weeks.

How is Ergoloid Tablets Supplied 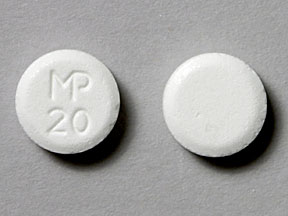