Capillary Leak Syndrome (CLS) which may be life-threatening or fatal if not properly managed, can occur in patients receiving Elzonris. Monitor for signs and symptoms of CLS and take actions as recommended [see Warnings and Precautions (5.1)].

Indications and Usage for Elzonris

Elzonris is a CD123-directed cytotoxin for the treatment of blastic plasmacytoid dendritic cell neoplasm (BPDCN) in adults and in pediatric patients 2 years and older.

Monitor vital signs and check albumin, transaminases, and creatinine prior to preparing each dose of Elzonris. See Table 1 for recommended dose modifications and Table 2 for CLS management guidelines.

Assure the following components required for dose preparation and administration are available prior to thawing Elzonris:

Capillary leak syndrome (CLS), including life-threatening and fatal cases, has been reported among patients treated with Elzonris. In patients receiving Elzonris in clinical trials, the overall incidence of CLS was 55% (52/94), including Grade 1 or 2 in 46% (43/94), Grade 3 in 6% (6/94), Grade 4 in 1% (1/94) and 2 fatal events (2/94, 2%). Common signs and symptoms (incidence ≥ 20%) associated with CLS that were reported during treatment with Elzonris include hypoalbuminemia, edema, weight gain, and hypotension.

Before initiating therapy with Elzonris, ensure that the patient has adequate cardiac function and serum albumin is greater than or equal to 3.2 g/dL. During treatment with Elzonris, monitor serum albumin levels prior to the initiation of each dose of Elzonris and as indicated clinically thereafter, and assess patients for other signs or symptoms of CLS, including weight gain, new onset or worsening edema, including pulmonary edema, hypotension or hemodynamic instability [see Dose Modifications (2.2)].

Treatment with Elzonris was associated with elevations in liver enzymes. In patients receiving Elzonris in clinical trials, elevations in liver enzymes occurred in 88% (83/94) of patients, including Grade 1 or 2 in 48% (45/94), Grade 3 in 36% (34/94), and Grade 4 in 4% (4/94). Monitor alanine aminotransferase (ALT) and aspartate aminotransferase (AST) prior to each infusion with Elzonris. Withhold Elzonris temporarily if the transaminases rise to greater than 5 times the upper limit of normal and resume treatment upon normalization or when resolved [see Dose Modifications (2.2)].

The following serious adverse drug reactions are described elsewhere in the labeling:

Safety of Elzonris was assessed in a single-arm clinical trial that included 94 adults with newly-diagnosed or relapsed/refractory myeloid malignancies, including 58 with BPDCN, treated with Elzonris 12 mcg/kg daily for 5 days of a 21-day cycle. The overall median number of cycles administered was 2 (range, 1-43), and 4 in patients with BPDCN (range, 1-43).

Table 3 summarizes the common (≥ 10%) adverse reactions with Elzonris in patients with myeloid malignancies. The rate of any given adverse reaction or lab abnormality was derived from all the reported events of that type.

Table 4 summarizes the clinically-important laboratory abnormalities that occurred in ≥ 10% patients with myeloid malignancies treated with Elzonris.

As with all therapeutic proteins, there is potential for immunogenicity. The detection of antibody formation is highly dependent on the sensitivity and specificity of the assay. Additionally, the observed incidence of antibody (including neutralizing antibody) positivity in an assay may be influenced by several factors including assay methodology, sample handling, timing of sample collection, concomitant medications, and underlying disease. For these reasons, comparison of the incidence of antibodies to Elzonris with the incidences of antibodies to other products may be misleading.

Immune response to Elzonris was evaluated by assessment of serum binding reactivity against Elzonris (anti-drug antibodies; ADA) and neutralizing antibodies by inhibition of functional activity. Immune response to Elzonris was assessed using two immunoassays. The first assay detected reactivity directed against Elzonris (ADA), and the second assay detected reactivity against the interleukin-3 (IL-3) portion of Elzonris. Two cell-based assays were used to investigate the presence of neutralizing antibodies by inhibition of a cell-based functional activity.

The presence of ADA had a clinically significant effect on the pharmacokinetics of tagraxofusp-erzs [see Clinical Pharmacology (12.2)]. In 130 patients treated with Elzonris in 4 clinical trials:

No data are available regarding the presence of Elzonris in human milk, the effects on the breastfed child, or the effects on milk production. Because of the potential for serious adverse reactions in breastfed children from Elzonris, breast feeding is not recommended during treatment and for 1 week after the last dose.

Based on its mechanism of action, Elzonris may cause fetal harm when administered to a pregnant woman [see Use in Specific Populations (8.1)].

Conduct pregnancy testing in females of reproductive potential within 7 days prior to initiating Elzonris treatment.

Advise females to use acceptable contraceptive methods during Elzonris treatment and for at least 1 week after the last dose of Elzonris.

Of the 94 patients who received Elzonris at the labeled dose in STML-401-0114, 23% were 75 years and older. The older patients experienced a higher incidence of altered mental status (including confusional state, delirium, mental status changes, dementia, and encephalopathy) than younger patients.

Elzonris (tagraxofusp-erzs) injection is a preservative-free, sterile, clear, colorless solution that may contain a few white to translucent particles and requires dilution prior to intravenous infusion. Elzonris is supplied at a concentration of 1,000 mcg/mL in a single-dose vial. Each mL of Elzonris contains 1,000 mcg tagraxofusp-erzs, sodium chloride (4.38 mg), sorbitol (50 mg), tromethamine (2.42 mg) and Water for Injection, USP and pH is 7.5.

Following administration of tagraxofusp-erzs 12 mcg/kg via 15-minute infusion in patients with BPDCN, the mean (SD) area under the plasma drug concentration over time curve (AUC) was 231 (123) hr·mcg/L and maximum plasma concentration (Cmax) was 162 (58.1) mcg/L.

Distribution
Mean (SD) volume of distribution of tagraxofusp-erzs is 5.1 (1.9) L in patients with BPDCN.

Drug Interaction Studies
No drug-drug interaction studies have been conducted with Elzonris.

STML-401-0114 (NCT 02113982; Study 0114) was a multicenter, open-label, single-arm, clinical trial that included a prospective cohort of 13 patients with treatment-naive BPDCN. Treatment consisted of Elzonris 12 mcg/kg intravenously over 15 minutes once daily on days 1 to 5 of a 21-day cycle. Patient baseline characteristics are presented in Table 5.

The efficacy of Elzonris in patients with treatment-naive BPDCN was based on the rate of complete response or clinical complete response (CR/CRc). Key efficacy measures are presented in Table 6. The median time to CR/CRc was 57 days (range: 14 to 107).

STML-401-0114 (NCT02113982; Study 0114) was a multicenter, open-label, single-arm, clinical trial that included 15 patients with relapsed or refractory BPDCN. Treatment consisted of Elzonris 12 mcg/kg on days 1 to 5 of each 21-day cycle. Patient baseline characteristics are presented in Table 7.

Advise patients of the risk of capillary leak syndrome (CLS), and to contact their health care professional for signs and symptoms associated with CLS including new or worsening edema, weight gain, shortness of breath, and/or hypotension after infusion. Advise patients to weigh themselves daily [see Warnings and Precautions (5.1)].

Advise females to avoid pregnancy and to use acceptable contraceptive methods during Elzonris treatment and for at least 1 week after the last dose of Elzonris.

Advise women not to breastfeed [see Use in Specific Populations (8.2)].

Manufactured and Distributed by:
Stemline Therapeutics, Inc.
New York, NY 10022
US License No. 2088 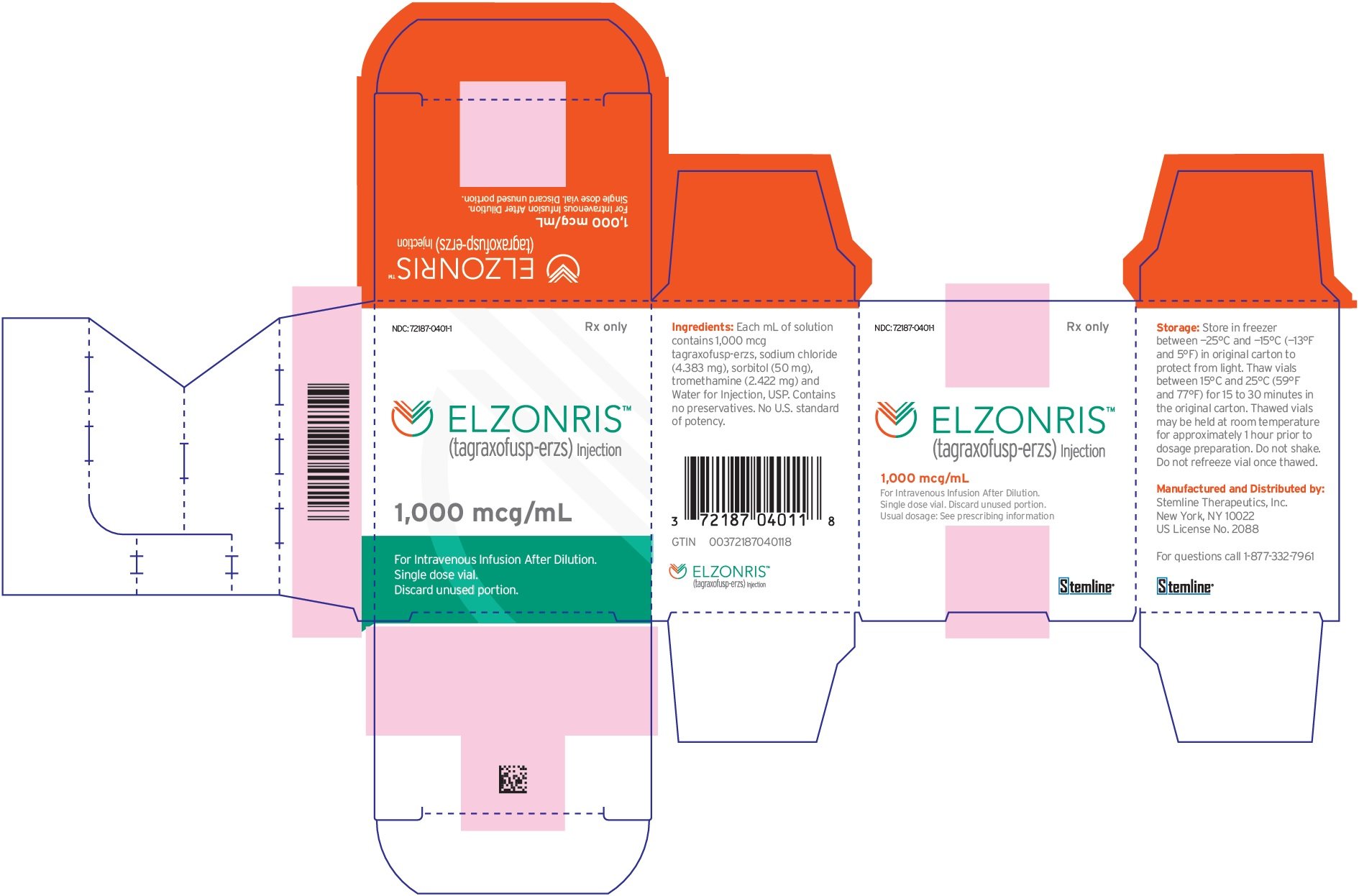