Indications and Usage for Diclegis

Diclegis is indicated for the treatment of nausea and vomiting of pregnancy in women who do not respond to conservative management.

Diclegis has not been studied in women with hyperemesis gravidarum.

The maximum recommended dose is four tablets (one in the morning, one in the mid-afternoon and two at bedtime) daily.

Take on an empty stomach with a glass of water [see Clinical Pharmacology (12.3)]. Swallow tablets whole. Do not crush, chew, or split Diclegis tablets.

Take as a daily prescription and not on an as needed basis. Reassess the woman for continued need for Diclegis as her pregnancy progresses.

Diclegis delayed-release tablets are white, round, film coated tablets containing 10 mg doxylamine succinate and 10 mg pyridoxine hydrochloride. The tablets are imprinted with the pink image of a pregnant woman on one side.

Diclegis is contraindicated in women with any of the following conditions:

Diclegis may cause somnolence due to the anticholinergic properties of doxylamine succinate, an antihistamine. Women should avoid engaging in activities requiring complete mental alertness, such as driving or operating heavy machinery, while using Diclegis until cleared to do so by their healthcare provider.

Diclegis use is not recommended if a woman is concurrently using central nervous system (CNS) depressants including alcohol. The combination may result in severe drowsiness leading to falls or accidents [see Drug Interactions (7.1)].

There have been reports of false positive urine screening tests for methadone, opiates, and PCP with doxylamine succinate/pyridoxine hydrochloride use [see Drug Interactions (7.3)].

The following adverse reactions are discussed elsewhere in the labeling:

The safety and efficacy of Diclegis were compared to placebo in a double-blind, randomized, multi-center trial in 261 women with nausea and vomiting of pregnancy. The mean gestational age at enrollment was 9.3 weeks, range 7 to 14 weeks gestation [see Clinical Studies (14)]. Adverse reactions for Diclegis that occurred at an incidence ≥5 percent and exceeded the incidence for placebo are summarized in Table 1.

The following adverse events, listed alphabetically, have been identified during post-approval use of the combination of 10 mg doxylamine succinate and 10 mg pyridoxine hydrochloride. Because these reactions are reported voluntarily from a population of uncertain size, it is not always possible to reliably estimate their frequency or establish a causal relationship to drug exposure.

Use of Diclegis is contraindicated in women who are taking monoamine oxidase inhibitors (MAOIs), which prolong and intensify the anticholinergic (drying) effects of antihistamines. Concurrent use of alcohol and other CNS depressants (such as hypnotic sedatives and tranquilizers) with Diclegis is not recommended.

False positive drug screens for methadone, opiates, and PCP can occur with doxylamine succinate/pyridoxine hydrochloride use. Confirmatory tests, such as Gas Chromatography Mass Spectrometry (GC-MS), should be used to confirm the identity of the substance in the event of a positive immunoassay result.

Diclegis is intended for the treatment of nausea and vomiting of pregnancy in women who do not respond to conservative management. Maternal risks are discussed throughout the labeling. No increased risk for congenital malformations has been reported in epidemiologic studies in pregnant women.

In the U.S. general population, the estimated background risks for major birth defects and miscarriage in clinically recognized pregnancies are 2-4% and 15-20%, respectively.

Women should not breastfeed while using Diclegis.

The molecular weight of doxylamine succinate is low enough that passage into breast milk can be expected. Excitement, irritability and sedation have been reported in nursing infants presumably exposed to doxylamine succinate through breast milk. Infants with apnea or other respiratory syndromes may be particularly vulnerable to the sedative effects of Diclegis resulting in worsening of their apnea or respiratory conditions.

The safety and effectiveness of Diclegis in children under 18 years of age have not been established.

Fatalities have been reported from doxylamine overdose in children. The overdose cases have been characterized by coma, grand mal seizures and cardiorespiratory arrest. Children appear to be at a high risk for cardiorespiratory arrest. A toxic dose for children of more than 1.8 mg/kg has been reported. A 3 year old child died 18 hours after ingesting 1,000 mg doxylamine succinate. However, there is no correlation between the amount of doxylamine ingested, the doxylamine plasma level and clinical symptomatology.

Signs and Symptoms of Overdose

Diclegis is a delayed-release formulation, therefore, signs and symptoms of intoxication may not be apparent immediately.

Signs and symptoms of overdose may include restlessness, dryness of mouth, dilated pupils, sleepiness, vertigo, mental confusion and tachycardia.

If treatment is needed, it consists of gastric lavage or activated charcoal, whole bowel irrigation and symptomatic treatment. For additional information about overdose treatment, call a poison control center (1‑800-222-1222).

Doxylamine succinate is a white to creamy white powder that is very soluble in water and alcohol, freely soluble in chloroform and very slightly soluble in ether and benzene. 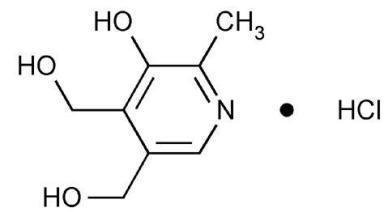 Pyridoxine hydrochloride is a white or practically white crystalline powder that is freely soluble in water, slightly soluble in alcohol and insoluble in ether.

The mechanism of action of Diclegis is unknown.

Doxylamine and pyridoxine are absorbed in the gastrointestinal tract, mainly in the jejunum.

The Cmax of doxylamine and pyridoxine are achieved within 7.5 and 5.5 hours, respectively (see Table 2).

Multiple-dose administration of Diclegis results in increased concentrations of doxylamine as well as increases in doxylamine Cmax and AUC0-last of absorption. The time to reach the maximum concentration is not affected by multiple doses. The mean accumulation index is more than 1.0 suggesting that doxylamine accumulates following multiple dosing (see Table 3).

Although no accumulation was observed for pyridoxine, the mean accumulation index for each metabolite (pyridoxal, pyridoxal 5’-phosphate, and pyridoxamine 5’-phosphate) is more than 1.0 following multiple-dose administration of Diclegis. The time to reach the maximum concentration is not affected by multiple doses (see Table 2).

The administration of food delays the absorption of both doxylamine and pyridoxine. This delay is associated with a lower peak concentration of doxylamine, but the extent of absorption is not affected (see Table 4).

Doxylamine is biotransformed in the liver by N-dealkylation to its principle metabolites N-desmethyl-doxylamine and N, N-didesmethyldoxylamine.

Pyridoxine is a prodrug primarily metabolized in the liver.

The principle metabolites of doxylamine, N-desmethyl-doxylamine and N, N-didesmethyldoxylamine, are excreted by the kidney.

The terminal elimination half-life of doxylamine and pyridoxine are 12.5 hours and 0.5 hours, respectively (see Table 5).

Race: No pharmacokinetic studies have been conducted related to race.

Hepatic Impairment: No pharmacokinetic studies have been conducted in hepatic impaired patients.

Renal Impairment: No pharmacokinetic studies have been conducted in renal impaired patients.

A double-blind, randomized, multi-center, placebo-controlled study was conducted to support the safety and efficacy of Diclegis in the treatment of nausea and vomiting of pregnancy. Adult women 18 years of age or older and 7 to 14 weeks gestation (median 9 weeks of gestation) with nausea and vomiting of pregnancy were randomized to 14 days of Diclegis or placebo. Two tablets of Diclegis were administered at bedtime on Day 1. If symptoms of nausea and vomiting persisted into the afternoon hours of Day 2, the woman was directed to take her usual dose of two tablets at bedtime that night and, beginning on Day 3, to take one tablet in the morning and two tablets at bedtime. Based upon assessment of remaining symptoms at her clinic visit on Day 4 (± 1 day), the woman may have been directed to take an additional tablet mid-afternoon. A maximum of four tablets (one in the morning, one in the mid-afternoon and two at bedtime) were taken daily.

The primary efficacy endpoint was the change from baseline at Day 15 in the Pregnancy Unique-Quantification of Emesis (PUQE) score. The PUQE score incorporates the number of daily vomiting episodes, number of daily heaves, and length of daily nausea in hours, for an overall score of symptoms rated from 3 (no symptoms) to 15 (most severe).

At baseline, the mean PUQE score was 9.0 in the Diclegis arm and 8.8 in the placebo arm. There was a 0.7 (95% confidence interval 0.2 to 1.2 with p-value 0.006) mean decrease (improvement in nausea and vomiting symptoms) from baseline in PUQE score at Day 15 with Diclegis compared to placebo (see Table 6).

Diclegis delayed-release tablets are supplied in a high-density polyethylene bottle with a polypropylene child-resistant cap and a silica gel desiccant canister. Each white, round, film-coated, delayed-release tablet contains 10 mg doxylamine succinate and 10 mg pyridoxine hydrochloride, and is imprinted on one side with the pink image of a pregnant woman. Diclegis tablets are provided as follows:

Inform women to avoid engaging in activities requiring complete mental alertness, such as driving or operating heavy machinery, while using Diclegis until cleared to do so.

Inform women of the importance of not taking Diclegis with alcohol or sedating medications, including other antihistamines (present in some cough and cold medications), opiates and sleep aids because somnolence could worsen leading to falls or other accidents.

Inform women that use of Diclegis may result in false positive urine drug screening for methadone, opiates and PCP.

Diclegis® is a registered trademark of Duchesnay Inc.

This Patient Information has been approved by the U.S. Food and Drug Administration Issued: June 2018 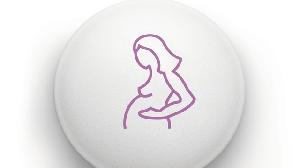