Chronic traumatic encephalopathy (CTE) is the term used to describe brain degeneration likely caused by repeated head traumas. CTE is a diagnosis made only at autopsy by studying sections of the brain.

CTE is a rare disorder that is not yet well understood. CTE is not related to the immediate consequences of a late-life episode of head trauma. CTE has a complex relationship with head traumas such as persistent post-concussive symptoms and second impact syndrome that occur earlier in life.

Experts are still trying to understand how repeated head traumas — including how many head injuries and the severity of those injuries — and other factors might contribute to the changes in the brain that result in CTE.

CTE has been found in the brains of people who played football and other contact sports, including boxing. It may also occur in military personnel who were exposed to explosive blasts. Some signs and symptoms of CTE are thought to include difficulties with thinking (cognition) and emotions, physical problems and other behaviors. It's thought that these develop years to decades after head trauma occurs.

CTE cannot be made as a diagnosis during life except in those rare individuals with high-risk exposures. Researchers do not yet know the frequency of CTE in the population and do not understand the causes. There is no cure for CTE. Researchers are currently developing diagnostic biomarkers for CTE, but none has been validated yet.

There are no specific symptoms that have been clearly linked to CTE. Some of the possible signs and symptoms of CTE can occur in many other conditions. In the few people with proved CTE, signs and symptoms have included cognitive, behavioral, mood and motor changes.

CTE symptoms don't develop right after a head injury, but experts believe that they might develop over years or decades after repeated head trauma. Experts currently believe that CTE symptoms appear in two forms. In early life between the late 20s and early 30s, the first form of CTE may cause mental health and behavioral issues including depression, anxiety, impulsivity and aggression. The second form of CTE is thought to cause symptoms later in life, around age 60. These signs and symptoms include memory and thinking problems that are likely to progress to dementia.

The full list of signs to look for in people with CTE at autopsy is still unknown. It is unclear what kind of symptoms, if any, CTE may cause during life. Little is known right now about how CTE progresses.

CTE is thought to develop over many years after repeated brain injuries that may be mild or severe. However, see your doctor in case of the following:

Repetitive head trauma is likely the cause of CTE. Football and ice hockey players, as well as military personnel serving in war zones, have been the focus of most CTE studies, though other sports and factors such as physical abuse also can lead to repetitive head injuries.

However, not all athletes and not everyone who experiences repeated concussions, including military personnel, go on to develop CTE. Some studies have shown no increased incidence of CTE in people exposed to repeated head injuries.

In brains with CTE, researchers have found that there is a buildup of a protein called tau around the blood vessels. Tau buildup in CTE is different from accumulations of tau found in Alzheimer's disease and other forms of dementia. CTE is thought to cause areas of the brain to waste away (atrophy). Injuries to the sections of nerve cells that conduct electrical impulses affect communication between cells. 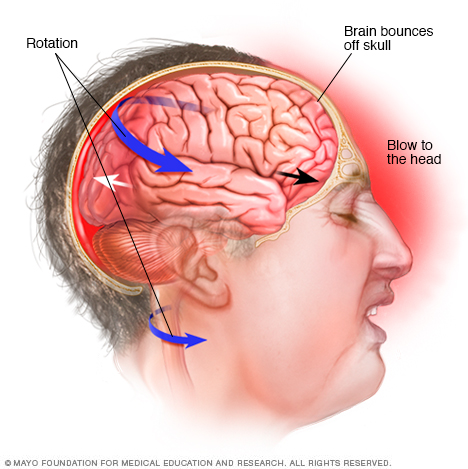 A concussion occurs when a blow to the head or a sudden jolt shakes the head and causes movement of the brain inside the bony and rigid skull.

Repeated exposure to traumatic brain injury is thought to increase the risk of CTE, but experts are still learning about the risk factors.

There is no treatment for CTE. But CTE may be prevented because it is associated with recurrent concussions. Individuals who have had one concussion are more likely to have another head injury. The current recommendation to prevent CTE is to reduce mild traumatic brain injuries and prevent additional injury after a concussion.

There is currently no way to diagnose CTE. It can only be suspected in people who are at high risk due to repeated head trauma over the course of years during their sports or military experiences. A diagnosis requires evidence of degeneration of brain tissue and deposits of tau and other proteins in the brain that can be seen only upon inspection after death (autopsy).

Some researchers are actively trying to find a test for CTE that can be used while people are alive. Others continue to study the brains of deceased individuals who may have had CTE, such as football players.

The hope is to eventually use a range of neuropsychological tests, brain imaging such as specialized MRI tests and biomarkers to diagnose CTE. In particular, imaging of amyloid and tau proteins will aid in diagnosis.

A positron emission tomography (PET) scan uses a low-level radioactive tracer that is injected into a vein. Then, a scanner tracks the tracer's flow through the brain. Researchers are actively working to develop PET markers to detect tau abnormalities associated with neurodegenerative disease in people who are living.

Researchers are also working to develop tracers that target and bind to tau buildup and other proteins on PET scans. Studies are underway using these types of scans and tracers to look for tau buildup in the brains of retired athletes who experienced head injuries. These PET scans are in the research phase and not available for clinical testing.

There's been little research on plasma or cerebral spinal fluid to diagnose the long-term disease processes of CTE. Some biomarkers that are used in Alzheimer's disease research may be useful for CTE because the conditions are similar. These biomarkers would need to identify brain degeneration from CTE separately from the original brain trauma.

CTE is a progressive, degenerative brain disease for which there is no treatment. More research on treatments is needed, but the current approach is to prevent head injury. It's also important to stay informed about the latest recommendations for detecting and managing traumatic brain injury.

You'll probably start by seeing your family doctor, who may refer you to a neurologist, psychiatrist, neuropsychologist or other specialist for further evaluation.

Because appointments can be brief and there's often a lot to discuss, prepare before your appointment.

Preparing a list of questions will help make the most of your time with the doctor. Prioritize questions from most important to least important. Some basic questions to ask the doctor include:

If you've had a concussion, some basic questions to ask your doctor include:

Don't hesitate to ask questions during your appointment at any time that you don't understand something.

The doctor may ask you a variety of questions.

If you've had a concussion, your doctor may ask questions related to events surrounding the injury:

Questions related to cognitive or emotional signs and symptoms: