Indications and Usage for Vistogard

Vistogard® is indicated for the emergency treatment of adult and pediatric patients:

Limited case reports of uridine triacetate use during pregnancy are insufficient to inform a drug-associated risk of birth defects and miscarriage. When administered orally to pregnant rats during the period of organogenesis, uridine triacetate at doses of one-half the maximum recommended human dose (MRHD) of 40 grams per day was not teratogenic and did not produce adverse effects on embryo-fetal development [see Data].

In an embryo-fetal development study, uridine triacetate was administered orally to pregnant rats during the period of organogenesis at doses up to 2000 mg/kg per day (about one-half the maximum recommended human dose (MRHD) of 40 grams per day on a body surface area basis). There was no evidence of teratogenicity or harm to the fetus and no effect on maternal body weight and overall health.

There are no data on the presence of uridine triacetate in human milk, the effect on the breastfed infant or the effect on milk production. The development and health benefits of breastfeeding should be considered along with the mother's clinical need for Vistogard and any potential adverse effects on the breastfed infant from Vistogard or from the underlying maternal condition.

Of the 135 patients in clinical studies with Vistogard, 30% were 65 and over, including 11% that were 75 and over. Clinical studies of Vistogard did not include sufficient numbers of subjects aged 65 and over to determine whether they respond differently from younger subjects.

Vistogard oral granules contain the active ingredient uridine triacetate which is a pyrimidine analog. The chemical name for uridine triacetate is (2',3',5'-tri-O-acetyl-β-D-ribofuranosyl)-2,4(1H,3H)-pyrimidinedione. The molecular weight is 370.3 grams/mole and it has an empirical formula of C15H18N2O9. The structural formula is: 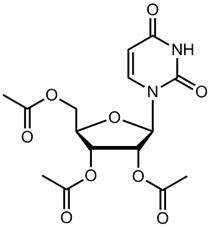 Fluorouracil is a cytotoxic antimetabolite that interferes with nucleic acid metabolism in normal and cancer cells. Cells anabolize fluorouracil to the cytotoxic intermediates 5-fluoro-2'-deoxyuridine-5'-monophosphate (FdUMP) and 5-fluorouridine triphosphate (FUTP). FdUMP inhibits thymidylate synthase, blocking thymidine synthesis. Thymidine is required for DNA replication and repair. Uridine is not found in DNA.

Vistogard delivers 4- to 6-fold more uridine into the systemic circulation compared to equimolar doses of uridine itself. Maximum concentrations of uridine in plasma following oral Vistogard are generally achieved within 2 to 3 hours, and the half-life ranges from approximately 2 to 2.5 hours.

Studies 1 and 2 included an assessment of plasma uridine in a subgroup of patients who were overdosed with fluorouracil or experiencing early-onset of serious fluorouracil toxicities. Samples were obtained prior to Vistogard treatment and at 1 to 4 hours following the first and final doses of Vistogard given at 10 g (adults) or 6.2 grams/m2 (pediatric) every 6 hours for up to 20 doses. Plasma uridine concentrations are summarized in Table 3.

Food Effect on Uridine PK: A study in healthy adult subjects receiving a slightly different formulation of uridine triacetate granules (6 gram dose) under fed and fasted conditions showed no difference in the overall rate and extent of uridine exposure.

Circulating uridine is taken up into mammalian cells via specific nucleoside transporters, and also crosses the blood brain barrier.

Uridine can be excreted via the kidneys, but is also metabolized by normal pyrimidine catabolic pathways present in most tissues.

In vitro data showed that uridine triacetate was a weak substrate for P-glycoprotein. Uridine triacetate inhibited the transport of a known P-glycoprotein substrate, digoxin, with an IC50 of 344 µM. Due to the potential for high local (gut) concentrations of the drug after dosing, the interaction of Vistogard with orally administered P-gp substrate drugs cannot be ruled out.

In vivo data in humans are not available.

Pharmacokinetic analysis showed that within the age range evaluated (20 to 83 years), age did not have a significant effect on uridine pharmacokinetics.

Long-term studies in animals have not been performed to evaluate the carcinogenic potential of uridine triacetate.

Uridine triacetate was not genotoxic in the Ames test, the mouse lymphoma assay and the mouse micronucleus test.

Orally administered uridine triacetate did not affect fertility or general reproductive performance in male and female rats at doses up to 2000 mg/kg per day (about one-half the maximum recommend human dose (MRHD) of 40 grams per day on a body surface area basis).

The efficacy of Vistogard was assessed in 135 patients who were treated in two open-label trials, Study 1 (n=60) and Study 2 (n=75). The patients in both studies had either received an overdose of fluorouracil or capecitabine, or presented with severe or life-threatening toxicities within 96 hours following the end of fluorouracil or capecitabine administration. Overdose was defined as administration of fluorouracil at a dose, or infusion rate, greater than the intended dose or maximum tolerated dose for the patient's intended regimen of fluorouracil. Vistogard was administered at 10 grams orally every 6 hours for 20 doses or at a body surface area adjusted dosage of 6.2 grams/m2/dose for 20 doses for four patients between 1 and 7 years of age. The major efficacy outcome was survival at 30 days or until the resumption of chemotherapy if prior to 30 days.

In Study 1 and Study 2 combined, the median age of the patients was 59 years (range: 1 to 83), 56% were male, 72% were white, 9% were Black/African American, 6% were Hispanic, 4% were Asian, and 95% had a cancer diagnosis. Of the 135 patients, 117 were treated with Vistogard following an overdose of fluorouracil (n=112) or capecitabine (n=5), and 18 were treated after exhibiting severe or life-threatening fluorouracil toxicities within 96 hours following the end of fluorouracil administration. The severe or life-threatening toxicities involved the central nervous system (such as encephalopathy, acute mental status change), cardiovascular system, gastrointestinal system (such as mucositis), and bone marrow. A total of six pediatric patients were administered Vistogard. Four patients initiated Vistogard more than 96 hours following the end of fluorouracil or capecitabine administration. Of the 112 patients overdosed with fluorouracil, 105 (94%) were overdosed by infusion rate only (range 1.3 to 720 times the planned infusion rate), four (4%) were overdosed by dose only, and three (3%) were overdosed by both dose and rate.

The survival results are shown in Table 4. Of the 135 patients who were treated with Vistogard in Studies 1 and 2 there were five deaths due to fluorouracil or capecitabine toxicity (4%). Of the five patients who died, two were treated after 96 hours following the end of fluorouracil administration. In the patients treated with Vistogard for an overdose of fluorouracil or capecitabine in Studies 1 and 2 combined (n=117), survival at 30 days was 97% (n=114). In the patients receiving Vistogard for early-onset severe or life-threatening toxicity in Studies 1 and 2 combined (n=18), the survival at 30 days was 89% (n=16). In these studies 33% of patients (n=45) resumed chemotherapy in less than 30 days. Based on retrospective historical case reports of 25 patients who were overdosed with fluorouracil and received supportive care only, all were overdosed by rate with a range 1.9 to 64 times the planned infusion rate, and 84% died.

Advise the patient or caregiver:

Manufactured for and distributed by: