Indications and Usage for Twinrix

Twinrix is indicated for active immunization against disease caused by hepatitis A virus and infection by all known subtypes of hepatitis B virus. Twinrix is approved for use in persons 18 years of age or older.

Upon storage, a fine white deposit with a clear colorless layer above may be present. Re-suspend the vaccine following the steps below.

1. Hold the syringe upright in a closed hand.

2. Shake the syringe by tipping it upside down and back upright again.

3. Repeat this action vigorously for at least 15 seconds.

Parenteral drug products should be inspected visually for particulate matter and discoloration prior to administration, whenever solution and container permit. If either of these conditions exists, the vaccine should not be administered.

Attach a sterile needle to the prefilled syringe and administer intramuscularly.

Do not administer this product intravenously, intradermally, or subcutaneously.

Severe allergic reaction (e.g., anaphylaxis) after a previous dose of any hepatitis A-containing or hepatitis B-containing vaccine, or to any component of Twinrix, including yeast and neomycin, is a contraindication to administration of Twinrix [see Description (11)].

The tip caps of the prefilled syringes contain natural rubber latex which may cause allergic reactions.

Syncope (fainting) can occur in association with administration of injectable vaccines, including Twinrix. Syncope can be accompanied by transient neurological signs such as visual disturbance, paresthesia, and tonic-clonic limb movements. Procedures should be in place to avoid falling injury and to restore cerebral perfusion following syncope.

Prior to immunization, the healthcare provider should review the immunization history for possible vaccine sensitivity and previous vaccination-related adverse reactions to allow an assessment of benefits and risks. Appropriate medical treatment and supervision must be available to manage possible anaphylactic reactions following administration of the vaccine. [See Contraindications (4).]

To avoid diagnostic confusion between manifestations of an acute illness and possible vaccine adverse effects, vaccination with Twinrix should be postponed in persons with moderate or severe acute febrile illness unless they are at immediate risk of hepatitis A or hepatitis B infection.

Immunocompromised persons, including individuals receiving immunosuppressive therapy, may have a diminished immune response to Twinrix.

The safety of Twinrix has been evaluated in clinical trials involving the administration of approximately 7,500 doses to more than 2,500 individuals.

In a U.S. study, 773 subjects (aged 18 to 70 years) were randomized 1:1 to receive Twinrix (0-, 1-, and 6-month schedule) or concurrent administration of ENGERIX-B (0-, 1-, and 6-month schedule) and HAVRIX (0- and 6-month schedule). Solicited local adverse reactions and systemic adverse events were recorded by parents/guardians on diary cards for 4 days (Days 0 to 3) after vaccination. Unsolicited adverse events were recorded for 31 days after vaccination. Solicited reactions reported following the administration of Twinrix or ENGERIX-B and HAVRIX are presented in Table 1.

Among 2,299 subjects in 14 clinical trials, the following adverse reactions were reported to occur within 30 days following vaccination:

Incidence 1% to 10% of Injections, Seen in Clinical Trials with Twinrix

Incidence <1% of Injections, Seen in Clinical Trials with Twinrix

Incidence <1% of Injections, Seen in Clinical Trials with HAVRIX and/or ENGERIX-B

Adverse reactions within 30 days of vaccination in the U.S. clinical trial of Twinrix given on a 0-, 7-, and 21- to 30-day schedule followed by a booster dose at 12 months were comparable to those reported in other clinical trials.

The following adverse reactions have been identified during post-approval use of Twinrix, HAVRIX, or ENGERIX-B. Because these reactions are reported voluntarily from a population of uncertain size, it is not possible to reliably estimate their frequency or establish a causal relationship to the vaccine.

The following list includes adverse reactions for HAVRIX and/or ENGERIX-B not already reported above for Twinrix.

Do not mix Twinrix with any other vaccine or product in the same syringe.

When concomitant administration of immunoglobulin is required, it should be given with a different syringe and at a different injection site.

There are no data to assess the concomitant use of Twinrix with other vaccines.

Hepatitis B surface antigen (HBsAg) derived from hepatitis B vaccines has been transiently detected in blood samples following vaccination. Serum HBsAg detection may not have diagnostic value within 28 days after receipt of a hepatitis B vaccine, including Twinrix.

All pregnancies have a risk of birth defect, loss, or other adverse outcomes. In the U.S. general population, the estimated background risk of major birth defects and miscarriage in clinically recognized pregnancies is 2% to 4% and 15% to 20%, respectively.

There are no adequate and well-controlled studies of Twinrix in pregnant women in the U.S. Available data do not suggest an increased risk of major birth defects and miscarriage in women who received Twinrix within 28 days prior to conception or during pregnancy (see Data).

A developmental toxicity study was performed in female rats administered Twinrix prior to mating and during gestation (0.2 mL at each occasion). This study revealed no adverse effects on fetal or pre-weaning development (see Data).

Human Data: A pregnancy exposure registry was maintained from 2001 to 2015. The registry prospectively enrolled 245 women who received a dose of Twinrix during pregnancy or within 28 days prior to conception. After excluding induced abortions (n = 6, including one of a fetus with congenital anomalies), those lost to follow-up (n = 142), those with exposure in the third trimester (n = 1), and those with an unknown exposure timing (n = 9), there were 87 pregnancies with known outcomes with exposure within 28 days prior to conception, or in the first or second trimesters. Miscarriage was reported for 9.6% of pregnancies with exposure to Twinrix prior to 20 weeks gestation (8/83). Major birth defects were reported for 3.8% of live born infants whose mothers were exposed within 28 days prior to conception or during the first or second trimester (3/80). The rates of miscarriage and major birth defects were consistent with estimated background rates.

In pre- and post-licensure clinical studies of Twinrix, 45 pregnant women were inadvertently administered Twinrix following their last menstrual period. Among such pregnancies, after excluding elective terminations (n = 1) and those lost to follow-up (n = 1), there were 43 pregnancies with known outcomes all with exposure in the first trimester. Miscarriage was reported in 16% of pregnancies (7/43) and major birth defects were reported in 2.6% of live births (1/38). The rates of miscarriage and major birth defects were consistent with estimated background rates.

Animal Data: In a developmental toxicity study, female rats were administered Twinrix by intramuscular injection on Day 30 prior to mating and on gestation Days 6, 8, 11, and 15. The total dose was 0.2 mL (divided) at each occasion (a single human dose is 1 mL). No adverse effects on pre-weaning development up to post-natal Day 25 were observed. There were no fetal malformations or variations.

There is no information regarding the presence of Twinrix in human milk, the effects on the breastfed child, or the effects on milk production. The developmental and health benefits of breastfeeding should be considered along with the mother’s clinical need for Twinrix and any potential adverse effects on the breastfed child from Twinrix or from the underlying maternal condition. For preventive vaccines, the underlying maternal condition is susceptibility to disease prevented by the vaccine.

Safety and effectiveness in pediatric patients younger than 18 years have not been established.

Clinical studies of Twinrix did not include sufficient numbers of subjects aged 65 years and older to determine whether they respond differently from younger subjects [see Clinical Studies (14.1, 14.3)].

Twinrix [Hepatitis A & Hepatitis B (Recombinant) Vaccine] is a bivalent vaccine containing the antigenic components used in producing HAVRIX (Hepatitis A Vaccine) and ENGERIX-B [Hepatitis B Vaccine (Recombinant)]. Twinrix is a sterile suspension for intramuscular administration that contains inactivated hepatitis A virus (strain HM175) and noninfectious HBsAg. The hepatitis A virus is propagated in MRC-5 human diploid cells and inactivated with formalin. The purified HBsAg is obtained by culturing genetically engineered Saccharomyces cerevisiae yeast cells, which carry the surface antigen gene of the hepatitis B virus. Bulk preparations of each antigen are adsorbed separately onto aluminum salts and then pooled during formulation.

A 1-mL dose of vaccine contains 720 ELISA Units of inactivated hepatitis A virus and 20 mcg of recombinant HBsAg protein. One dose of vaccine also contains 0.45 mg of aluminum in the form of aluminum phosphate and aluminum hydroxide as adjuvants, amino acids, sodium chloride, phosphate buffer, polysorbate 20, and Water for Injection. From the manufacturing process, each 1-mL dose of Twinrix also contains residual formalin (not more than 0.1 mg), MRC-5 cellular proteins (not more than 2.5 mcg), neomycin sulfate (an aminoglycoside antibiotic included in the cell growth media; not more than 20 ng), and yeast protein (no more than 5%).

Twinrix is formulated without preservatives.

The course of infection with hepatitis A virus (HAV) is extremely variable, ranging from asymptomatic infection to fulminant hepatitis.3

The presence of antibodies to HAV (anti-HAV) confers protection against hepatitis A disease. However, the lowest titer needed to confer protection has not been determined. Natural infection provides lifelong immunity even when antibodies to hepatitis A are undetectable. Seroconversion is defined as antibody titers equal to or greater than the assay cut-off (cut-off values vary depending on the assay used) in those previously seronegative.

Infection with hepatitis B virus (HBV) can have serious consequences including acute massive hepatic necrosis and chronic active hepatitis. Chronically infected persons are at increased risk for cirrhosis and hepatocellular carcinoma.

Antibody concentrations ≥10 mIU/mL against HBsAg are recognized as conferring protection against hepatitis B virus infection.4

Twinrix has not been evaluated for its carcinogenic or mutagenic potential, or for impairment of male fertility in animals. Vaccination of female rats with Twinrix had no effect on fertility. [See Use in Specific Populations (8.1).]

In 11 clinical trials, sera from 1,551 healthy adults aged 17 to 70 years, including 555 male subjects and 996 female subjects, were analyzed following administration of 3 doses of Twinrix on a 0-, 1-, and 6-month schedule. Seroconversion (defined as equal to or greater than assay cut-off depending on assay used) for antibodies against HAV was elicited in 99.9% of vaccinees, and protective antibodies (defined as ≥10 mIU/mL) against HBV surface antigen were detected in 98.5% of vaccinees, 1 month after completion of the 3-dose series (Table 2).

Immunogenicity in Adults Older than 40 Years

Two clinical trials involving a total of 129 subjects demonstrated that antibodies to both HAV and HBV surface antigen persisted for at least 4 years after the first vaccine dose in a 3-dose series of Twinrix, given on a 0-, 1-, and 6-month schedule. For comparison, after the recommended immunization regimens for HAVRIX and ENGERIX-B, respectively, similar studies involving a total of 114 subjects have shown that seropositivity to HAV and HBV also persists for at least 4 years.

©2018 GSK group of companies or its licensor.

Hepatitis A & Hepatitis B (Recombinant) Vaccine

For 18 Years of Age and Older

©2018 GSK group of companies or its licensor 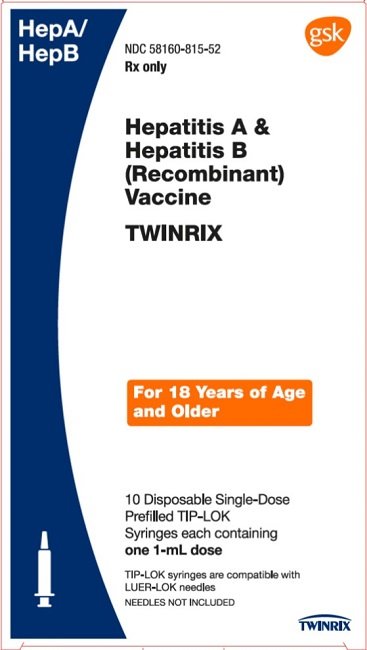