Indications and Usage for Tepmetko

This indication is approved under accelerated approval based on overall response rate and duration of response [see Clinical Studies (14)]. Continued approval for this indication may be contingent upon verification and description of clinical benefit in confirmatory trial(s).

The recommended dosage of Tepmetko is 450 mg orally once daily with food [see Clinical Pharmacology (12.3)] until disease progression or unacceptable toxicity.

Instruct patients to take their dose of Tepmetko at approximately the same time every day and to swallow tablets whole. Do not chew, crush or split tablets.

Advise patients not to make up a missed dose within 8 hours of the next scheduled dose.

If vomiting occurs after taking a dose of Tepmetko, advise patients to take the next dose at the scheduled time.

The recommended dose reduction of Tepmetko for the management of adverse reactions is 225 mg orally once daily.

Permanently discontinue Tepmetko in patients who are unable to tolerate 225 mg orally once daily.

The recommended dosage modifications of Tepmetko for adverse reactions are provided in Table 1.

Tablets: 225 mg, white-pink, oval, biconvex film-coated tablets with embossment "M" on one side and plain on the other side.

Monitor liver function tests (including ALT, AST, and total bilirubin) prior to the start of Tepmetko, every 2 weeks during the first 3 months of treatment, then once a month or as clinically indicated, with more frequent testing in patients who develop increased transaminases or bilirubin. Based on the severity of the adverse reaction, withhold, dose reduce, or permanently discontinue Tepmetko [see Dosage and Administration (2.3)].

Based on findings in animal studies and its mechanism of action Tepmetko can cause fetal harm when administered to a pregnant woman. Oral administration of tepotinib to pregnant rabbits during the period of organogenesis resulted in malformations (teratogenicity) and anomalies at exposures less than the human exposure based on area under the curve (AUC) at the 450 mg daily clinical dose. Advise pregnant women of the potential risk to a fetus. Advise females of reproductive potential or males with female partners of reproductive potential to use effective contraception during treatment with Tepmetko and for one week after the final dose. [See Use in Specific Populations (8.1, 8.3)]

The following adverse reactions are described in greater detail elsewhere in the labeling:

The pooled safety population described in the WARNINGS AND PRECAUTIONS reflect exposure to Tepmetko in 448 patients with solid tumors enrolled in five open-label, single-arm studies receiving Tepmetko as single agent at a dose of 450 mg once daily. This included 255 patients with NSCLC positive for METex14 skipping alterations, who received Tepmetko in VISION. Among 448 patients who received Tepmetko, 32% were exposed for 6 months or longer, and 12% were exposed for greater than one year.

A clinically relevant laboratory abnormality in < 20% of patients who received Tepmetko was increased lipase in 18% of patients, including 3.7% Grades 3 to 4.

Effects of Other Drugs on Tepmetko

Effects of Tepmetko on Other Drugs

Based on findings in animal studies and the mechanism of action [see Clinical Pharmacology (12.1)], Tepmetko can cause fetal harm when administered to a pregnant woman. There are no available data on the use of Tepmetko in pregnant women. Oral administration of tepotinib to pregnant rabbits during the period of organogenesis resulted in malformations (teratogenicity) and anomalies at maternal exposures less than the human exposure based on area under the curve (AUC) at the 450 mg daily clinical dose (see Data). Advise pregnant women of the potential risk to a fetus.

In the U.S. general population, the estimated background risk of major birth defects and miscarriage in clinically recognized pregnancies is 2% to 4% and 15% to 20%, respectively.

There are no data regarding the secretion of tepotinib or its metabolites in human milk or its effects on the breastfed infant or milk production. Advise women not to breastfeed during treatment with Tepmetko and for one week after the final dose.

Based on animal data, Tepmetko can cause malformations at doses less than the human exposure based on AUC at the 450 mg clinical dose [see Use in Specific Populations (8.1)].

Verify pregnancy status in females of reproductive potential prior to initiating Tepmetko [see Use in Specific Populations (8.1)].

Advise females of reproductive potential to use effective contraception during Tepmetko treatment and for one week after the final dose.

Advise male patients with female partners of reproductive potential to use effective contraception during Tepmetko treatment and for one week after the final dose.

The safety and efficacy of Tepmetko in pediatric patients have not been established.

Of 255 patients with METex14 skipping alterations in VISION who received 450 mg Tepmetko once daily, 79% were 65 years or older, and 43% were 75 years or older. No clinically important differences in safety or efficacy were observed between patients aged 65 years or older and younger patients.

Tepotinib hydrochloride hydrate is a white to off-white powder with a pKa of 9.5.

Tepotinib exposure-response relationships and the time course of pharmacodynamic response have not been fully characterized.

At the recommended dosage, no large mean increases in QTc (i.e. > 20 ms) were detected in patients with various solid tumors. A concentration-dependent increase in QTc interval was observed. The QTc effect of tepotinib at high clinical exposures has not been evaluated.

The pharmacokinetics of tepotinib were evaluated in patients with cancer administered 450 mg once daily unless otherwise specified. Tepotinib exposure (AUC0-12h and Cmax) increases dose-proportionally over the dose range of 27 mg (0.06 times the recommended daily dosage) to 450 mg. At the recommended dosage, the geometric mean (coefficient of variation [CV] %) steady state Cmax was 1,291 ng/mL (48.1%) and the AUC0-24h was 27,438 ng∙h/mL (51.7%). The oral clearance of tepotinib did not change with respect to time. The median accumulation was 2.5-fold for Cmax and 3.3-fold for AUC0-24h after multiple daily doses of tepotinib.

The median Tmax of tepotinib is 8 hours (range from 6 to 12 hours). The geometric mean (CV%) absolute bioavailability of Tepmetko in the fed state was 71.6% (10.8%) in healthy subjects.

The geometric mean (CV%) apparent volume of distribution (VZ/F) of tepotinib is 1,038 L (24.3%). Protein binding of tepotinib is 98% and is independent of drug concentration at clinically relevant exposures.

The apparent clearance (CL/F) of tepotinib is 23.8 L/h (87.5%) and the half-life is 32 hours following oral administration of Tepmetko in patients with cancer.

Tepotinib is primarily metabolized by CYP3A4 and CYP2C8. One major circulating plasma metabolite (M506) has been identified.

Following a single oral administration of a radiolabeled dose of 450 mg tepotinib, approximately 85% of the dose was recovered in feces (45% unchanged) and 13.6% in urine (7% unchanged). The major circulating metabolite M506 accounted for about 40.4% of the total radioactivity in plasma.

CYP3A Substrates: Coadministration of Tepmetko had no clinically significant effect on the pharmacokinetics of midazolam (sensitive CYP3A substrate).

MATE2 and OCT2 Substrates: No clinically relevant differences in glucose levels were observed when metformin (MATE2 and OCT2 substrate) was coadministered with tepotinib.

Carcinogenicity studies have not been performed with tepotinib. Tepotinib and its major circulating metabolite were not mutagenic in vitro in the bacterial reverse mutation (Ames) assay, or a mouse lymphoma assay. In vivo, tepotinib was not genotoxic in a rat micronucleus test.

Fertility studies of tepotinib have not been performed. There were no morphological changes in male or female reproductive organs in repeat-dose toxicity studies in dogs.

Efficacy results are presented in Table 4.

Tepmetko (tepotinib) tablets: 225 mg tepotinib, white-pink, oval, biconvex film-coated tablet with embossment "M" on one side and plain on the other side.

The blister cards consist of a child-resistant blister foil.

Inform patients of the risk of severe or fatal ILD/pneumonitis. Advise patients to contact their healthcare provider immediately to report new or worsening respiratory symptoms [see Warnings and Precautions (5.1)].

Inform patients that they will need to undergo lab tests to monitor liver function. Advise patients to immediately contact their healthcare provider for signs and symptoms of liver dysfunction [see Warnings and Precautions (5.2)].

Advise males and females of reproductive potential that Tepmetko can cause fetal harm.

Advise females of reproductive potential to use effective contraception during and for one week after the final dose of Tepmetko [see Warnings and Precautions (5.3) and Use in Specific Populations (8.3)].

Advise male patients with female partners of reproductive potential to use effective contraception during treatment with Tepmetko and for one week after the final dose of Tepmetko [see Warnings and Precautions (5.3) and Use in Specific Populations (8.3)].

Advise women not to breastfeed during treatment with Tepmetko and for one week after the final dose [see Use in Specific Populations (8.2)].

Tepmetko is a trademark of Merck KGaA,
Darmstadt, Germany 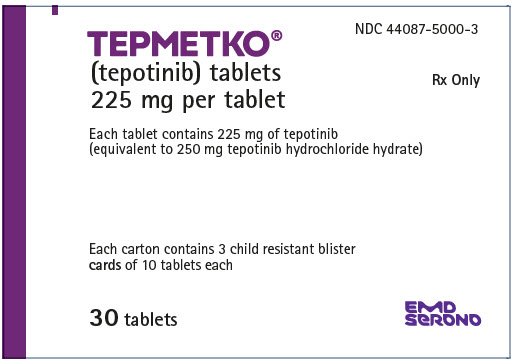 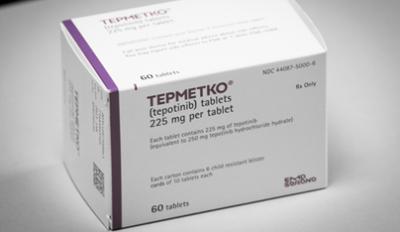