Trientine hydrochloride is N,N'-bis (2-aminoethyl)-1,2-ethanediamine dihydrochloride. It is a white to pale yellow crystalline hygroscopic powder. It is freely soluble in water, soluble in methanol, slightly soluble in ethanol, and insoluble in chloroform and ether.

The empirical formula is C6H18N4•2HCl with a molecular weight of 219.2. The structural formula is:

Wilson’s disease (hepatolenticular degeneration) is an autosomal inherited metabolic defect resulting in an inability to maintain a near-zero balance of copper. Excess copper accumulates possibly because the liver lacks the mechanism to excrete free copper into the bile. Hepatocytes store excess copper but when their capacity is exceeded copper is released into the blood and is taken up into extrahepatic sites. This condition is treated with a low copper diet and the use of chelating agents that bind copper to facilitate its excretion from the body.

One investigator treated 13 patients with trientine hydrochloride following their development of intolerance to d-penicillamine. Retrospectively, he compared these patients to an additional group of 12 patients with Wilson’s disease who were both tolerant of and controlled with d-penicillamine therapy, but who failed to continue any copper chelation therapy. The mean age at onset of disease of the latter group was 12 years as compared to 21 years for the former group. The trientine hydrochloride group received d-penicillamine for an average of 4 years as compared to an average of 10 years for the non-treated group.

The clinical outcome of the two groups also differed markedly. Of the 13 patients on therapy with trientine hydrochloride (mean duration of therapy 4.1 years; range 1 to 13 years), all were alive at the data cutoff date, and in the non-treated group (mean years with no therapy 2.7 years; range 3 months to 9 years), 9 of the 12 died of hepatic disease.

In patients not previously treated with chelating agents, a similar comparison was made:

These results demonstrate that Syprine is effective as a cupriuretic agent in patients with Wilson’s disease although on a molar basis it appears to be less potent or less effective than penicillamine. Evidence from a radio-labelled copper study indicates that the different cupriuretic effect between these two drugs could be due to a difference in selectivity of the drugs for different copper pools within the body.

Data on the pharmacokinetics of trientine hydrochloride are not available. Dosage adjustment recommendations are based upon clinical use of the drug (see DOSAGE AND ADMINISTRATION).

Indications and Usage for Syprine

Syprine is indicated in the treatment of patients with Wilson’s disease who are intolerant of penicillamine. Clinical experience with Syprine is limited and alternate dosing regimens have not been well-characterized; all endpoints in determining an individual patient’s dose have not been well defined. Syprine and penicillamine cannot be considered interchangeable. Syprine should be used when continued treatment with penicillamine is no longer possible because of intolerable or life endangering side effects.

Unlike penicillamine, Syprine is not recommended in cystinuria or rheumatoid arthritis. The absence of a sulfhydryl moiety renders it incapable of binding cystine and, therefore, it is of no use in cystinuria. In 15 patients with rheumatoid arthritis, Syprine was reported not to be effective in improving any clinical or biochemical parameter after 12 weeks of treatment.

Syprine is not indicated for treatment of biliary cirrhosis.

Hypersensitivity to this product.

There are no reports of hypersensitivity in patients who have been administered trientine hydrochloride for Wilson’s disease. However, there have been reports of asthma, bronchitis and dermatitis occurring after prolonged environmental exposure in workers who use trientine hydrochloride as a hardener of epoxy resins. Patients should be observed closely for signs of possible hypersensitivity.

Patients should be directed to take Syprine on an empty stomach, at least one hour before meals or two hours after meals and at least one hour apart from any other drug, food, or milk. The capsules should be swallowed whole with water and should not be opened or chewed. Because of the potential for contact dermatitis, any site of exposure to the capsule contents should be washed with water promptly. For the first month of treatment, the patient should have his temperature taken nightly, and he should be asked to report any symptom such as fever or skin eruption.

The most reliable index for monitoring treatment is the determination of free copper in the serum, which equals the difference between quantitatively determined total copper and ceruloplasmin-copper. Adequately treated patients will usually have less than 10 mcg free copper/dL of serum.

Therapy may be monitored with a 24-hour urinary copper analysis periodically (i.e., every 6-12 months). Urine must be collected in copper-free glassware. Since a low copper diet should keep copper absorption down to less than one milligram a day, the patient probably will be in the desired state of negative copper balance if 0.5 to 1.0 mg of copper is present in a 24-hour collection of urine.

In general, mineral supplements should not be given since they may block the absorption of Syprine. However, iron deficiency may develop, especially in children and menstruating or pregnant women, or as a result of the low copper diet recommended for Wilson’s disease. If necessary, iron may be given in short courses, but since iron and Syprine each inhibit absorption of the other, two hours should elapse between administration of Syprine and iron.

It is important that Syprine be taken on an empty stomach, at least one hour before meals or two hours after meals and at least one hour apart from any other drug, food, or milk. This permits maximum absorption and reduces the likelihood of inactivation of the drug by metal binding in the gastrointestinal tract.

Data on carcinogenesis, mutagenesis, and impairment of fertility are not available.

Trientine hydrochloride was teratogenic in rats at doses similar to the human dose. The frequencies of both resorptions and fetal abnormalities, including hemorrhage and edema, increased while fetal copper levels decreased when trientine hydrochloride was given in the maternal diets of rats. There are no adequate and well-controlled studies in pregnant women. Syprine should be used during pregnancy only if the potential benefit justifies the potential risk to the fetus.

Clinical studies of Syprine did not include sufficient numbers of subjects aged 65 and over to determine whether they respond differently from younger subjects. Other reported clinical experience is insufficient to determine differences in responses between the elderly and younger patients. In general, dose selection should be cautious, usually starting at the low end of the dosing range, reflecting the greater frequency of decreased hepatic, renal, or cardiac function, and of concomitant disease or other drug therapy.

Syprine is not indicated for treatment of biliary cirrhosis, but in one study of 4 patients treated with trientine hydrochloride for primary biliary cirrhosis, the following adverse reactions were reported: heartburn; epigastric pain and tenderness; thickening, fissuring and flaking of the skin; hypochromic microcytic anemia; acute gastritis; aphthoid ulcers; abdominal pain; melena; anorexia; malaise; cramps; muscle pain; weakness; rhabdomyolysis. A causal relationship of these reactions to drug therapy could not be rejected or established.

There is a report of an adult woman who ingested 30 grams of trientine hydrochloride without apparent ill effects. No other data on overdosage are available.

The daily dose of Syprine should be increased only when the clinical response is not adequate or the concentration of free serum copper is persistently above 20 mcg/dL. Optimal long-term maintenance dosage should be determined at 6-to 12-month intervals (see PRECAUTIONS, Laboratory Tests).

It is important that Syprine be given on an empty stomach, at least one hour before meals or two hours after meals and at least one hour apart from any other drug, food, or milk. The capsules should be swallowed whole with water and should not be opened or chewed.

Syprine capsules, 250 mg, are hard gelatin capsules with light brown opaque cap and body, imprinted with “Syprine” on cap and “ATON/710” on the body. They are supplied as follows:

Syprine is a trademark of Bausch Health Companies Inc. or its affiliates. 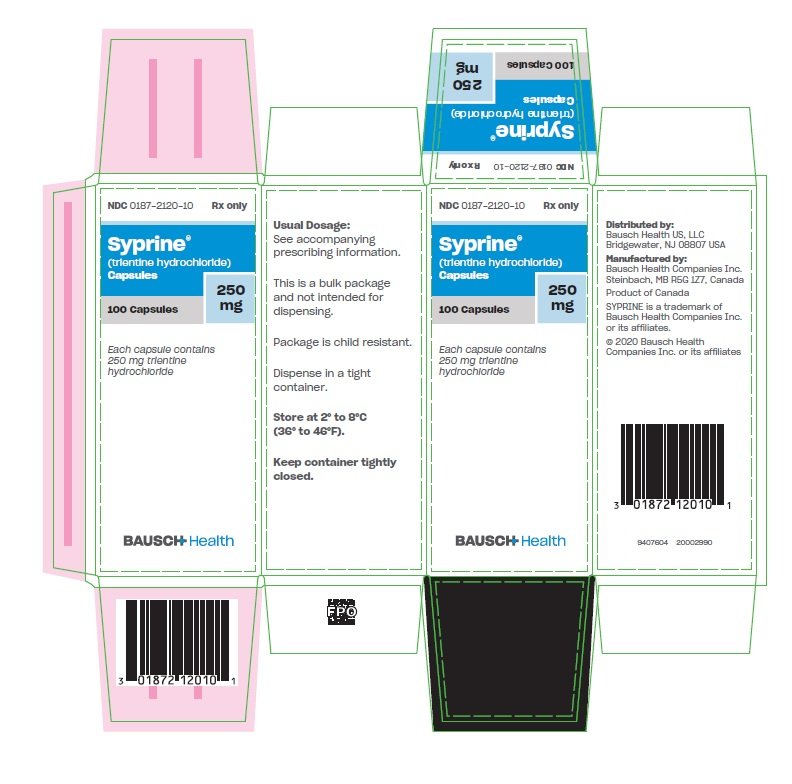 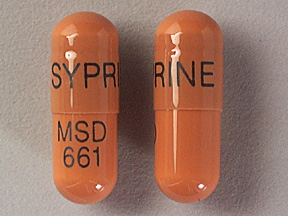