Indications and Usage for Obizur

Obizur, Antihemophilic Factor (Recombinant), Porcine Sequence, is a recombinant DNA derived, antihemophilic factor indicated for the on-demand treatment and control of bleeding episodes in adults with acquired hemophilia A.

A guide for dosing Obizur for the on-demand treatment and control of bleeding episodes is provided in Table 1. Maintain the factor VIII activity within the target range. Plasma levels of factor VIII should not exceed 200% of normal or 200 units per dL.

5.
Place the vial adapter package on a clean surface with the luer-lock pointing up.
6.
Snap off the tamper resistant cap of the pre-filled syringe (Figure C).

8.
Remove the vial adapter from the plastic package (Figure E).

10.
Push the plunger down to slowly inject all of the diluent from the syringe into the Obizur vial.
11.
Gently swirl (in a circular motion) the Obizur vial without removing the syringe until all of the powder is fully dissolved (Figure G). The reconstituted solution should be inspected visually for particulate matter before administration. Do not use if particulate matter or discoloration is observed.

12.
With one hand hold the vial and vial adapter, and with the other hand firmly grasp the barrel of the pre-filled syringe and in a counterclockwise motion unscrew the syringe from the vial adapter (Figure H).

13.
Use Obizur within 3 hours after reconstitution when stored at room temperature.

3.
Unscrew the large syringe counterclockwise from the vial adapter and repeat this process for all reconstituted vials of Obizur until the total volume to be administered is reached.
4.
Administer the reconstituted Obizur intravenously at a rate of 1 to 2 mL per minute.

Obizur is contraindicated in patients who have had life-threatening hypersensitivity reactions to Obizur or its components (including traces of hamster proteins).

Anamnestic reactions with rise in human factor VIII and/or recombinant factor VIII, porcine sequence inhibitors have also been reported in patients treated with Obizur. These anamnestic rises also may result in a lack of efficacy.

Monitor patients for the development of antibodies to Obizur by appropriate assays [see Warnings and Precautions (5.3)]. If the plasma factor VIII level fails to increase as expected, or if bleeding is not controlled after Obizur administration, suspect the presence of an anti-porcine factor VIII antibody.

If such inhibitory antibodies are suspected and there is a lack of efficacy, consider management options such as discontinuing Obizur and initiating other therapeutics such as a Factor VIII bypassing agent.

Common adverse reactions observed in greater than 5% of subjects in the clinical trial were development of inhibitors to porcine factor VIII.

The safety and efficacy of Obizur was evaluated in a multi-center, prospective, open-label, clinical trial that investigated adult patients with acquired hemophilia A. Twenty-nine adult subjects were enrolled in the study, received at least one dose of Obizur and were evaluable for safety [see Clinical Studies (14)]. Of the 29 adult subjects, 10 were between the ages of 42 and 65, and 19 were 65 years of age or older (18 Caucasian, 6 African-American, and 5 Asian). Ten (34%) subjects were female.

All subjects were monitored for development of inhibitory antibodies to Obizur using the Nijmegen modification of the Bethesda inhibitor assay. A subject was considered to have developed an Obizur inhibitor if the titer was ≥0.6 Bethesda Units (BU)/mL.

In the U.S. general population, the estimated background risk for major birth defects and miscarriage in clinically recognized pregnancies is 2 to 4% and 15 to 20%, respectively.

There is no information regarding the presence of Obizur in human milk, the effect on the breastfed child, or the effects on milk production.

The developmental and health benefits of breastfeeding should be considered along with the mother's clinical need for Obizur and any potential adverse effects on the breastfed child from Obizur or from the underlying maternal condition.

The safety and efficacy of Obizur have not been established in pediatric patients.

Of the 29 subjects within the trial, the average age was 70 years of age. Nineteen subjects were 65 years of age or older. Clinical studies suggest that Obizur is safe and effective in the adult population [see Adverse Reactions (6) and Clinical Studies (14)]. While no differences were observed between geriatric and adult responses to Obizur, these findings are inconclusive given the small number of subjects enrolled in either group.

The active ingredient in Obizur is a recombinant (r) analogue of porcine factor VIII (pFVIII) with an approximate molecular weight of 170 kDa. The rpFVIII molecule in Obizur is a glycoprotein containing a 90 kDa heavy chain and a 80 kDa light chain. The B-domain normally present in naturally occurring porcine factor VIII has been replaced with a twenty-four amino acid linker. Once activated, the resulting rpFVIIIa has a comparable activity to the endogenous human FVIIIa.

Obizur is expressed in a genetically engineered baby hamster kidney (BHK) cell line which secretes rpFVIII into the cell culture medium, and the rpFVIII protein is purified using a series of chromatography and filtration steps. The production process includes two dedicated viral clearance steps - a solvent/detergent treatment step for viral inactivation and a nanofiltration step through a series of two 15-nm filters for removal of viruses. No additives of human or animal origin are used in the formulation of Obizur.

Each vial of Obizur is labeled with the actual rpFVIII activity expressed in units determined by a one-stage clotting assay, using a reference rpFVIII material calibrated against the World Health Organization (WHO) 8th International Standard for human FVIII concentrates. The specific activity of Obizur is in the range of 11000 to 18000 U per milligram of protein. The potency values of Obizur determined by the chromogenic assay vary and are approximately 20 to 50 % lower than those of the one-stage clotting assay.

Obizur temporarily replaces the inhibited endogenous factor VIII that is needed for effective hemostasis in patients with acquired hemophilia A.

Patients with acquired hemophilia A (AHA) have normal factor VIII genes but develop autoantibodies against their own factor VIII (i.e., inhibitors). These autoantibodies neutralize circulating human factor VIII and create a functional deficiency of this procoagulant protein. AHA results in a prolonged clotting time as measured by the activated partial thromboplastin time (aPTT) assay, a conventional in vitro test for biological activity of factor VIII. Treatment with Obizur should normalize the aPTT during treatment; however, aPTT normalization should not be used as a measure of efficacy.

Long-term studies in animals to evaluate the carcinogenic potential of Obizur, or studies to determine genotoxicity and the effects of Obizur on fertility, have not been performed.

The efficacy of Obizur for the treatment of serious bleeding episodes in subjects with acquired hemophilia A was investigated in a prospective, open-label trial (N=29). The trial was conducted in 18 Caucasian, 6 African-American, and 5 Asian subjects diagnosed with acquired hemophilia A (AHA), having auto-immune inhibitory antibodies to human factor VIII, and experiencing serious bleeding episodes that required hospitalization. Subjects with a prior history of bleeding disorders other than AHA, anti-porcine factor VIII antibody titer >20 Bethesda Units (BU), or in whom the bleeding episode was judged likely to resolve on its own were excluded. One subject was considered evaluable at study entry; however, it was later determined that this subject did not have AHA, leaving 28 subjects evaluable for efficacy.

An initial dose of 200 units per kg Obizur was administered to subjects for the treatment of life- or limb-threatening initial bleeding episodes. Patients were treated with Obizur until resolution of bleeding or dosing was continued at the physician's discretion according to the clinical assessment. These bleeding episodes included 19 intramuscular or joint bleeding episodes, 4 post-surgical bleeding episodes, 2 intracranial episodes, 2 surgeries, 1 retroperitoneal hemorrhage, and 1 periorbital bleed. Hemostatic response was assessed by the study site investigator at specified time points after initiation of Obizur treatment using a pre-specified rating scale that was based on subjective clinical assessments combined with objective factor VIII activity levels achieved. An assessment of effective or partially effective was considered as a positive response (see Table 2 for definitions).

In addition to response to treatment, the overall treatment success was determined by the investigator based on his/her ability to discontinue or reduce the dose and/or dosing frequency of Obizur. A total of 24/28 (86%) had successful treatment of the initial bleeding episode. Of those subjects treated with Obizur as first-line therapy, defined as no immediate previous use of anti-hemorrhagic agents prior to the first Obizur treatment, 16/17 (94%) had eventual treatment success reported. Eleven subjects were reported to have received anti-hemorrhagics (e.g. rFVIIa, activated prothrombin-complex concentrate, tranexamic acid) prior to first treatment with Obizur. Of these 11 subjects, eight had eventual successful treatment (73%).

Obizur is supplied as a white lyophilized powder in single-dose vials in the following package sizes:

Each package contains one package insert and appropriate number of each of the components listed below correlating to the vial package size:

The actual amount of Obizur in units is stated on the label of each vial.

Not made with natural rubber latex.

Obizur® is a trademark of Baxalta Incorporated, a Takeda company.

For Intravenous Administration After
Reconstitution Only

Rx Only
* Refer to actual potency 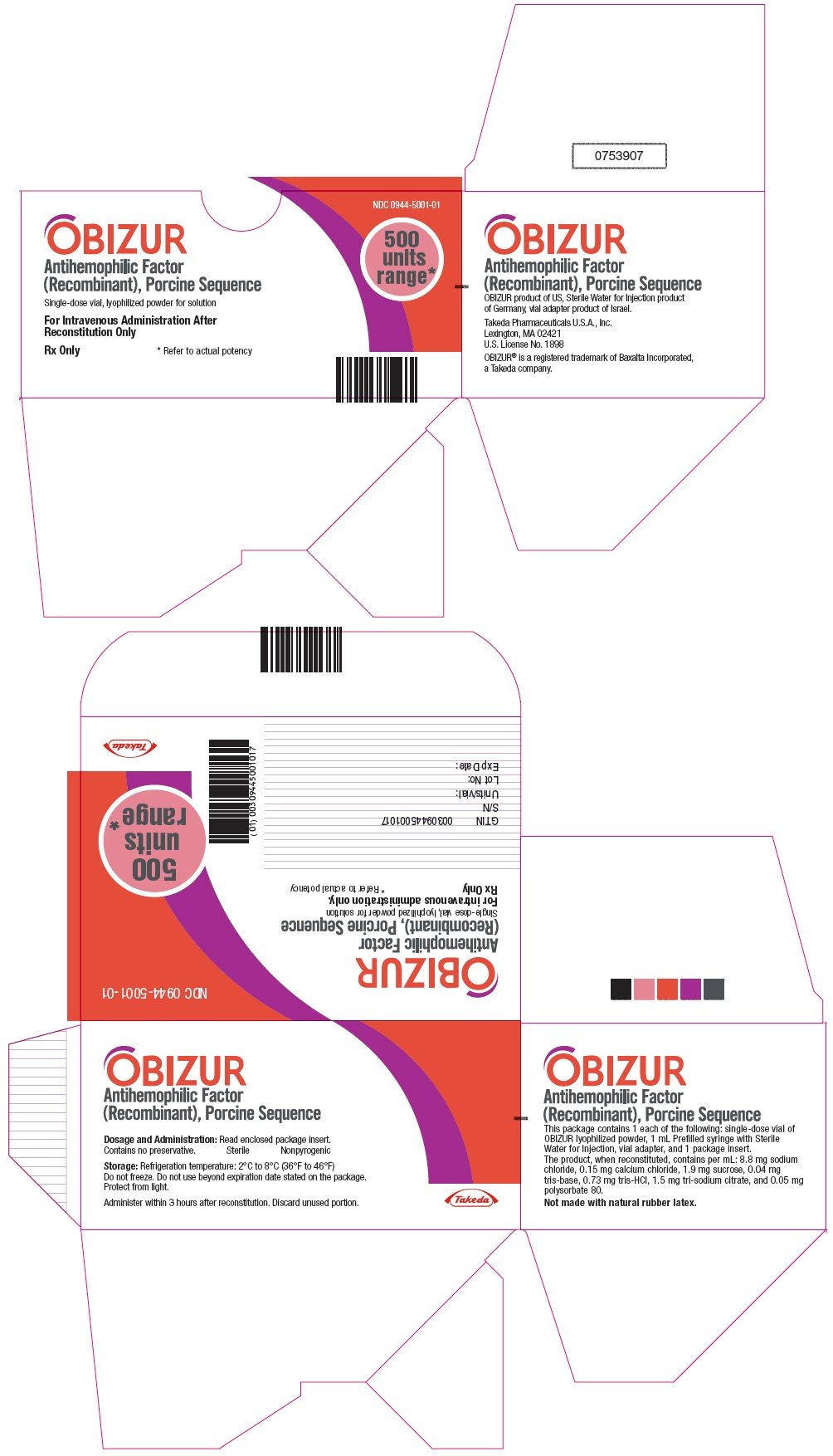