Indications and Usage for Macugen

FOR OPHTHALMIC INTRAVITREAL INJECTION ONLY.

Macugen 0.3 mg should be administered once every six weeks by intravitreous injection into the eye to be treated.

Macugen should be inspected visually for particulate matter and discoloration prior to administration. If visible particulates are observed and/or the liquid in the syringe is discolored, the syringe must not be used.

Administration of the syringe contents involves assembly of the syringe with the administration needle. The injection procedure should be carried out under controlled aseptic conditions, which includes the use of sterile gloves, a sterile drape, and a sterile eyelid speculum (or equivalent). When ready to assemble syringe and administer injection, carefully peel open pouches, remove contents, and place on sterile field. If upon opening the pouch, the plastic clip is missing or not attached to the syringe, the syringe should not be used.

To avoid compromising the sterility of the product, do not pull back on the plunger.

1.
Remove the syringe from the plastic clip.
2.
Twist off cap.
3.
Attach the sterile, single-use administration needle (included) to the syringe by screwing it into the syringe tip.
--Another sterile, single-use administration needle may be used in lieu of the one included. Remove the plastic needle shield from the needle.
4.
Holding the syringe with the needle pointing up, check the syringe for bubbles. If there are bubbles, gently tap the syringe with your finger until the bubbles rise to the top of the syringe. SLOWLY depress the plunger to eliminate all the bubbles and to expel the excess drug so that the top edge of the 3rd rib on the plunger stopper aligns with the preprinted black dosing line (see Figure 2, below).
5.
Inject the entire contents of the syringe.

The injection procedure should be carried out under controlled aseptic conditions, which includes the use of sterile gloves, a sterile drape, and a sterile eyelid speculum (or equivalent). Adequate anesthesia and a broad-spectrum microbicide should be given prior to the injection.

The patient's medical history for hypersensitivity reactions should be evaluated prior to performing the intravitreal procedure [see Warnings and Precautions (5) and Adverse Events (6)].

No special dosage modification is required for any of the populations that have been studied (i.e. gender, elderly).

The safety and efficacy of Macugen therapy administered to both eyes concurrently have not been studied.

Single-use glass syringe pre-filled with 0.3 mg of Macugen® in a nominal 90 μL solution for intravitreal injection.

Macugen is contraindicated in patients with ocular or periocular infections.

Macugen is contraindicated in patients with known hypersensitivity to pegaptanib sodium or any other excipient in this product.

Intravitreous injections, including those with Macugen, have been associated with endophthalmitis. Proper aseptic injection technique should always be utilized when administering Macugen. In addition, patients should be monitored during the week following the injection to permit early treatment, should an infection occur [see Dosage and Administration (2.4)].

Rare cases of anaphylaxis/anaphylactoid reactions, including angioedema, have been reported in the postmarketing experience following the Macugen intravitreal administration procedure [see Dosage and Administration (2.4) and Adverse Events (6.3)].

The following events were reported in 6-10% of patients receiving Macugen 0.3 mg therapy:

The following events were reported in 1-5% of patients receiving Macugen 0.3 mg therapy:

Anaphylaxis/anaphylactoid reactions, including angioedema, have been identified during postapproval use of Macugen. Because these reactions are reported voluntarily from a population of uncertain size, it is not always possible to reliably estimate their frequency or establish a causal relationship to drug exposure [see Dosage and Administration (2.4) and Warnings and Precautions (5.3)].

Teratogenic Effects: Pregnancy Category B. Pegaptanib produced no maternal toxicity and no evidence of teratogenicity or fetal mortality in mice at intravenous doses of up to 40 mg/kg/day (about 7,000 times the recommended human monocular ophthalmic dose of 0.3 mg/eye). Pegaptanib crosses the placenta in mice.

There are, however, no adequate and well-controlled studies in pregnant women. Because animal reproduction studies are not always predictive of human response, this drug should be used during pregnancy only if clearly needed.

Safety and effectiveness of Macugen in pediatric patients have not been established.

Approximately 94% (834/892) of the patients treated with Macugen were ≥65 years of age and approximately 62% (553/892) were ≥75 years of age. No difference in treatment effect or systemic exposure was seen with increasing age.

Doses of Macugen up to 10 times the recommended dosage of 0.3 mg have been studied. No additional adverse events have been noted but there is decreased efficacy with doses above 1 mg.

Pegaptanib sodium is a covalent conjugate of an oligonucleotide of twenty-eight nucleotides in length that terminates in a pentylamino linker, to which two 20-kilodalton monomethoxy polyethylene glycol (PEG) units are covalently attached via the two amino groups on a lysine residue.

Pegaptanib sodium is represented by the following structural formula: 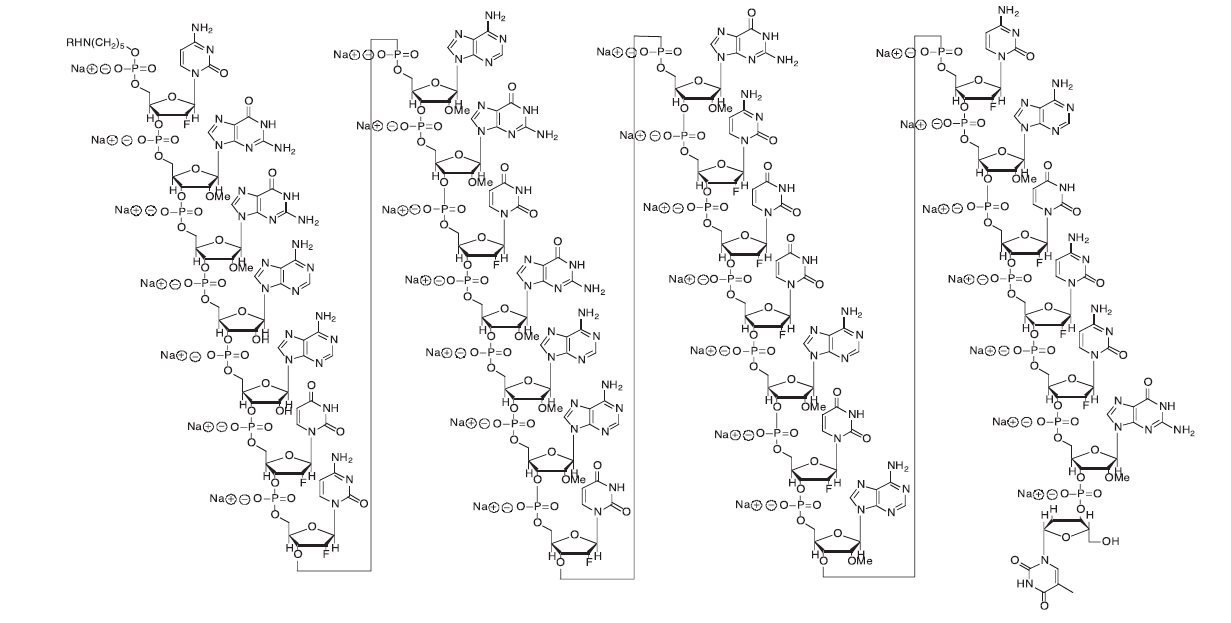 and n is approximately 450.

Pegaptanib is a selective vascular endothelial growth factor (VEGF) antagonist. VEGF is a secreted protein that selectively binds and activates its receptors located primarily on the surface of vascular endothelial cells. VEGF induces angiogenesis, and increases vascular permeability and inflammation, all of which are thought to contribute to the progression of the neovascular (wet) form of age-related macular degeneration (AMD), a leading cause of blindness. VEGF has been implicated in blood retinal barrier breakdown and pathological ocular neovascularization.

Pegaptanib is an aptamer, a pegylated modified oligonucleotide, which adopts a three-dimensional conformation that enables it to bind to extracellular VEGF. Under in vitro testing conditions, pegaptanib binds to the major pathological VEGF isoform, extracellular VEGF165, thereby inhibiting VEGF165 binding to its VEGF receptors. The inhibition of VEGF164, the rodent counterpart of human VEGF165, was effective at suppressing pathological neovascularization.

Pegaptanib is metabolized by nucleases and is generally not affected by the cytochrome P450 system.

Two early clinical studies conducted in patients who received Macugen alone and in combination with photodynamic therapy (PDT) revealed no apparent difference in the plasma pharmacokinetics of pegaptanib.

Based on preclinical data, pegaptanib is metabolized by endo- and exonucleases.

In humans, after a 3 mg monocular dose (10 times the recommended dose), the average (± standard deviation) apparent plasma half-life of pegaptanib is 10 (±4) days.

Plasma concentrations do not appear to be affected by age or gender, but have not been studied in patients under the age of 50.

Carcinogenicity studies with pegaptanib have not been conducted. No data are available to evaluate male or female mating or fertility indices.

Pegaptanib and its monomer component nucleotides (2'-MA, 2'-MG, 2'-FU, 2'-FC) were evaluated for genotoxicity in a battery of in vitro and in vivo assay systems. Pegaptanib, 2'-O-methyladenosine (2'-MA), and 2'-O-methylguanosine (2'-MG) were negative in all assay systems evaluated. 2'-fluorouridine (2'-FU) and 2'-fluorocytidine (2'-FC) were nonclastogenic and were negative in all S. typhimurium tester strains, but produced a nondose-related increase in revertant frequency in a single E. coli tester strain. Pegaptanib, 2'-FU, and 2'-FC tested negative in cell transformation assays.

The two trials enrolled patients with neovascular AMD characteristics including classic, occult, and mixed lesions of up to 12 disc areas and baseline visual acuity in the study eye between 20/40 and 20/320. The primary efficacy endpoint was the proportion of patients losing less than 15 letters of visual acuity, from baseline up to 54 week assessment. Verteporfin PDT usage was permitted at the discretion of the investigators in patients with predominantly classic lesions.

At the end of the first year (week 54), approximately 1050 of the original 1200 patients were re-randomized to either continue the same treatment or to discontinue treatment through week 102. See Figure 2.

Dose levels above 0.3 mg did not demonstrate any additional benefit.

The safety or efficacy of Macugen beyond 2 years has not been demonstrated.

In the days following Macugen administration, patients are at risk for the development of endophthalmitis. If the eye becomes red, sensitive to light, painful or develops a change in vision, the patient should seek the immediate care with their ophthalmologist [see Warnings and Precautions (5.1)].

Macugen is a trademark of Valeant Pharmaceuticals International, Inc. or its affiliates. 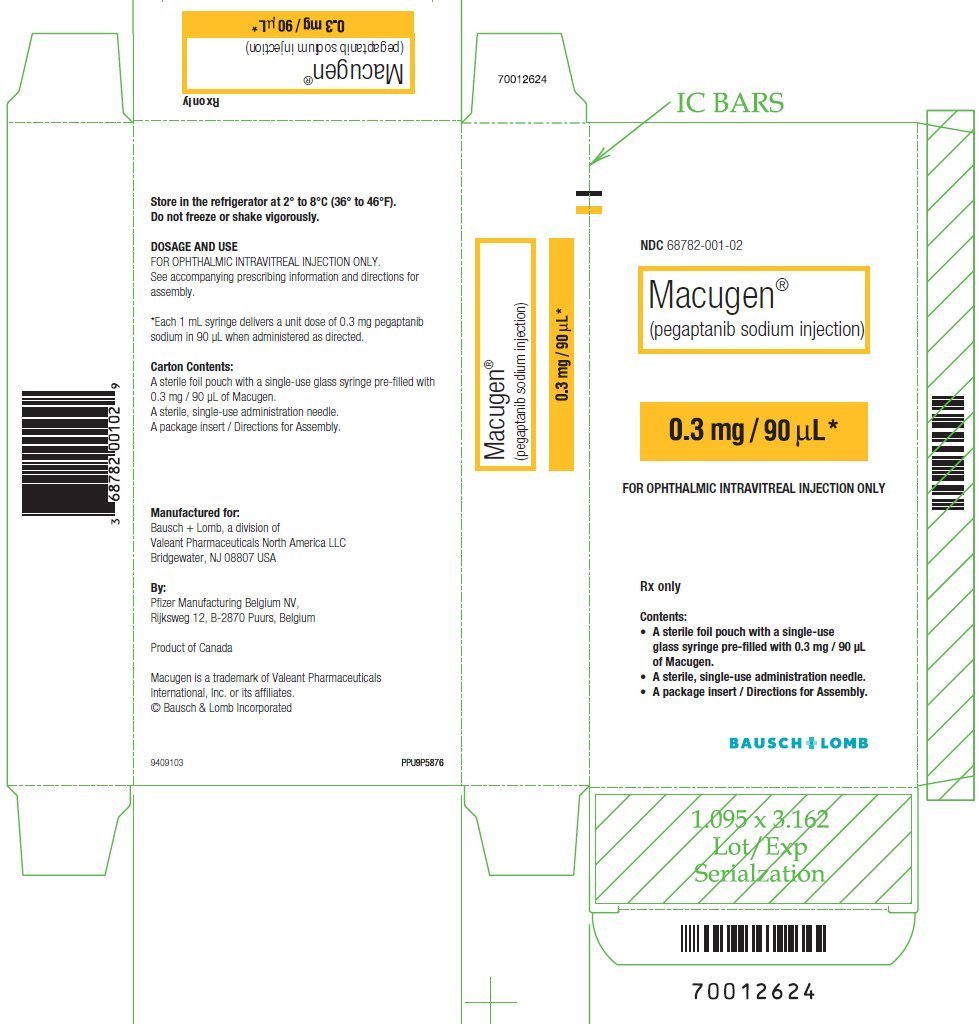