Kengreal is indicated as an adjunct to percutaneous coronary intervention (PCI) to reduce the risk of periprocedural myocardial infarction (MI), repeat coronary revascularization, and stent thrombosis (ST) in patients who have not been treated with a P2Y12 platelet inhibitor and are not being given a glycoprotein IIb/IIIa inhibitor [see Clinical Studies (14.1)].

The recommended dosage of Kengreal is a 30 mcg/kg IV bolus followed immediately by a 4 mcg/kg/min IV infusion. Initiate the bolus infusion prior to PCI. The maintenance infusion should ordinarily be continued for at least 2 hours or for the duration of PCI, whichever is longer.

Kengreal is intended for IV administration, after reconstitution and dilution.

Reconstitute the vial prior to dilution in a bag. For each 50 mg/vial, reconstitute by adding 5 mL of Sterile Water for Injection. Swirl gently until all material is dissolved. Avoid vigorous mixing. Allow any foam to settle. Ensure that the contents of the vial are fully dissolved and the reconstituted material is a clear, colorless to pale yellow solution. Parenteral drug products should be inspected visually for particulate matter after reconstitution.

Before administration, each reconstituted vial must be diluted further with Normal Saline (Sodium Chloride Injection 0.9% USP) or 5% Dextrose Injection USP.

Withdraw the contents from one reconstituted vial and add to one 250 mL saline bag. Mix the bag thoroughly. This dilution will result in a concentration of 200 mcg/mL and should be sufficient for at least 2 hours of dosing. Patients 100 kg and over will require a minimum of 2 bags.

Reconstituted Kengreal should be diluted immediately. Diluted Kengreal is stable for up to 12 hours in 5% Dextrose Injection and 24 hours in Normal Saline at Room Temperature. Discard any unused portion of reconstituted solution remaining in the vial.

Administer the bolus volume rapidly (<1 minute), from the diluted bag via manual IV push or pump. Ensure the bolus is completely administered before the start of PCI. Start the infusion immediately after administration of the bolus [see Dosage and Administration (2.1)].

For Injection: 50 mg of Kengreal lyophilized powder in a single-use 10 mL glass vial for reconstitution.

Kengreal is contraindicated in patients with significant active bleeding [see Warnings and Precautions (5.1) and Adverse Reactions (6.1)].

Kengreal is contraindicated in patients with known hypersensitivity (e.g., anaphylaxis) to Kengreal or any component of the product [see Adverse Reactions (6.1)].

Drugs that inhibit platelet P2Y12 function, including Kengreal, increase the risk of bleeding.

In CHAMPION PHOENIX bleeding events of all severities were more common with Kengreal than with clopidogrel [see Adverse Reactions (6.1)]. Bleeding complications with Kengreal were consistent across a variety of clinically important subgroups (see Figure 1).

Once Kengreal is discontinued, there is no antiplatelet effect after an hour [see Clinical Pharmacology (12.3)].

The following adverse reactions are also discussed elsewhere in the labeling:

The safety of Kengreal has been evaluated in 13,301 subjects in controlled trials, in whom, 5,529 were in the CHAMPION PHOENIX trial.

c requiring blood transfusion but not resulting in hemodynamic compromise

d all other bleeding not included in severe or moderate 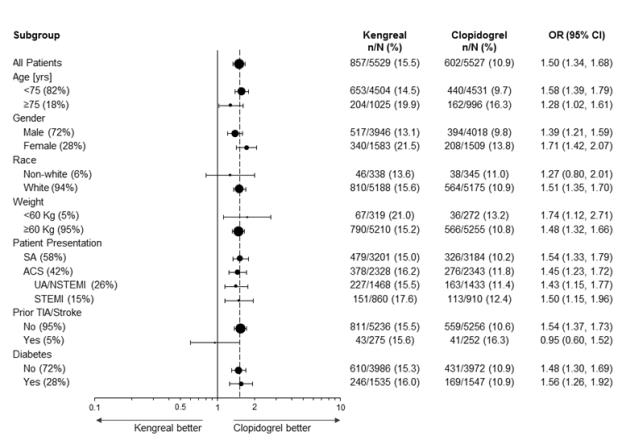 Note: The figure above presents effects in various subgroups most of which are baseline characteristics and most of which were pre-specified (patient presentation and weight were not pre-specified subgroups). The 95% confidence limits that are shown do not take into account how many comparisons were made, nor do they reflect the effect of a particular factor after adjustment for all other factors. Apparent homogeneity or heterogeneity among groups should not be over-interpreted.

Serious cases of hypersensitivity were more frequent with Kengreal (7/13301) than with control (2/12861). These included anaphylactic reactions, anaphylactic shock, bronchospasm, angioedema, and stridor.

Dyspnea was reported more frequently in patients treated with Kengreal (1.3%) than with control (0.4%).

There are no available data on cangrelor use in pregnant women to evaluate for a drug-associated risk of major birth defects, miscarriage or adverse maternal or fetal outcomes. Untreated myocardial infarction can be fatal to the pregnant women and fetus (see Clinical Considerations).

In animal reproduction studies, continuous infusion of cangrelor in pregnant rats and rabbits throughout organogenesis at dose approximately 2-times the maximum recommended human dose (MRHD) did not result in fetal malformations (see Data).

Myocardial infarction is a medical emergency in pregnancy which can be fatal to the pregnant woman and fetus if left untreated. Life-sustaining therapy for the pregnant woman should not be withheld due to potential concerns regarding the effects of cangrelor on the fetus.

Cangrelor use during labor and delivery may increase the risk for maternal bleeding and hemorrhage. Performance of neuraxial blockade procedures is not advised during cangrelor use due to potential risk of spinal hematoma. When possible, discontinue cangrelor 1 hour prior to labor, delivery, or neuraxial blockade [see Clinical Pharmacology (12.2)].

A prenatal and postnatal development study in female rats demonstrated a slight increase in the incidence of maternal mortality in dams treated at doses up to 30 mcg/kg/min (approximately 7.5 times the MRHD) cangrelor continuous infusion from Day 6 of gestation up to Day 23 post-partum. Pregnancy rates, gestation index, length of gestation, numbers of live, dead and malformed pups, sex ratio, live birth index, and lactation of the maternal animals were unaffected.

An embryo-fetal development study in rabbits administered 4, 12, or 36 mcg/kg/min cangrelor continuous IV infusion from Day 6 to Day 19 post-coitum resulted in increased incidences of abortion and intrauterine losses at ≥12 mcg/kg/min (3 times the MRHD). Fetal growth retardation occurred at 36 mcg/kg/min (9 times the MRHD) and was characterized by decreased fetal weights, slight reduction in ossification, and a slight increase in skeletal variants.

Cangrelor did not produce malformations in either the rat or rabbit embryo-fetal development studies and is not considered to be a teratogen.

In CHAMPION PHOENIX, 18% of patients were ≥75 years. No overall differences in safety or effectiveness were observed between these patients and those patients <75 years [see Clinical Studies (14.1)].

There is no specific treatment to reverse the antiplatelet effect of Kengreal but the effect is gone within one hour after the drug is discontinued.

In clinical trials, 36 patients received an overdose of Kengreal, ranging from 36 to 300 mcg/kg (bolus dose) or 4.8 to 13.7 mcg/kg/min (infusion dose). The maximum overdose received was 10 times the PCI bolus dose or 3.5 times the PCI infusion dose in 4 patients. No clinical sequela were noted as a result of overdose following completion of Kengreal therapy.

The chemical structure is represented below:

Cangrelor for Injection is a sterile white to off-white lyophilized powder for IV infusion. In addition to the active ingredient, cangrelor, each single use vial contains mannitol (158 mg), sorbitol (52 mg), and sodium hydroxide to adjust the pH.

Cangrelor inhibits activation and aggregation of platelets. After administration of a 30 mcg/kg IV bolus followed by a 4 mcg/kg/min IV infusion, platelet inhibition occurs within 2 minutes.

Figure 2 shows the effect on platelet activity, and its relation to cangrelor plasma concentration, of administering a 30 mcg/kg IV bolus, followed by a 1-hour 4 mcg/kg/min IV infusion, of cangrelor. The anti-platelet effect is maintained for the duration of the infusion. After discontinuation of the infusion, the anti-platelet effect decreases rapidly and platelet function returns to normal within 1 hour.

Kengreal administered intravenously has linear pharmacokinetics in both healthy volunteers and patients. Kengreal is rapidly distributed and metabolized, reaching Cmax within 2 minutes after administration of an intravenous bolus followed by infusion.

In a study in healthy volunteers, Kengreal administration at a dose of 30 mcg/kg bolus plus 4 mcg/kg/min showed a volume of distribution of 3.9 L. Plasma protein binding of Kengreal is about 97-98%.

Kengreal is deactivated rapidly in the circulation by dephosphorylation to its primary metabolite, a nucleoside, which has negligible anti-platelet activity. Kengreal’s metabolism is independent of hepatic function and it does not interfere with other drugs metabolized by hepatic enzymes.

Kengreal pharmacokinetics are not affected by sex, age, renal status or hepatic function. No dose adjustment is needed for these factors [see Use in Specific Populations (8)].

Although weight was a significant covariate for PK with higher clearance in heavier patients, the impact of weight on drug exposure is accounted by the use of weight-based dosing.

Co-administration of cangrelor with unfractionated heparin, aspirin, and nitroglycerin was formally studied in healthy subjects, with no evidence of an effect on the PK/PD of cangrelor.

In contrast, the antiplatelet effect of a 180 mg ticagrelor loading dose was not altered significantly when ticagrelor was administered during cangrelor infusion [see Drug Interactions (7.1)].

In vitro studies suggest that neither cangrelor nor its major metabolites inhibit the activity of the hepatic CYP isoenzymes at therapeutic concentrations. Therefore, cangrelor administration is not expected to interfere with the hepatic metabolism of other concomitantly administered therapeutic agents.

No carcinogenicity studies were conducted.

Cangrelor had no significant effect on male or female rats fertility treated by continuous infusion for 28 days, or on early embryonic development at steady state plasma concentration (Css) of approximately the same as that achieved in the PCI setting at the MRHD.

The CHAMPION PHOENIX trial was intended to test whether faster platelet inhibition with cangrelor at the time of PCI would reduce the rate of periprocedural thrombotic events compared to a drug with a slower antiplatelet effect, clopidogrel, given at about the time of PCI. It was a randomized, double-blind study in which patients with coronary artery disease (stable angina, UA/NSTEMI, STEMI) requiring PCI and receiving standard therapy including aspirin and heparin or bivalirudin were randomized 1:1 to Kengreal (n=5472) or to clopidogrel 300 or 600 mg (n=5470). Patients who had already taken an oral P2Y12 platelet inhibitor were not eligible to enroll. Patients administered glycoprotein IIb/IIIa inhibitors (GPI) or for whom GPI use was planned were also not eligible to enroll. PHOENIX was thus a study of people undergoing PCI who had not been previously treated with anti-platelet therapy other than aspirin.

The primary outcome measure was the first occurrence of any one of the composite endpoint of all-cause mortality, myocardial infarction (MI), ischemia-driven revascularization (IDR), and stent thrombosis (ST) within 48 hours after randomization.

Kengreal significantly reduced the occurrence of primary composite endpoint events compared to clopidogrel (relative risk reduction [RRR] 22%). Most of the effect was a reduction in post-procedural MIs detected solely by elevations in CK-MB (type 4a MI). Kengreal did not reduce the risk of death. Table 2 shows the study results for the primary composite endpoint and the contribution of each component to the primary endpoint.

Note: if a subject had more than one event at 48 hours, then worst outcome counted (death >MI >IDR >ST)

Note: if a subject had more than one event at 48 hours, then worst outcome counted (death >SCAI-MI >IDR >ARC-ST)

bARC-ST defined according to the ARC definition [Cutlip et al. 2007]

The effect of Kengreal appeared to be consistent in a variety of pre-specified and other clinically important subgroups (see Figure 4). 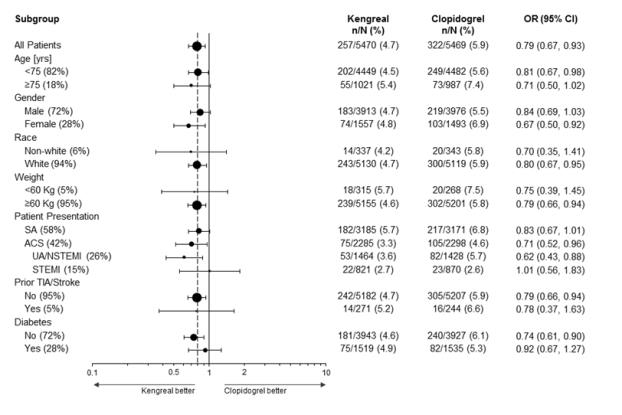 a The mITT population is all randomized subjects who received at least one dose of study drug and underwent the index PCI procedure.

Note: The figure above presents effects in various subgroups most of which are baseline characteristics and most of which were pre-specified (patient presentation and weight were not pre-specified subgroups). The 95% confidence limits that are shown do not take into account how many comparisons were made, nor do they reflect the effect of a particular factor after adjustment for all other factors. Apparent homogeneity or heterogeneity among groups should not be over-interpreted.

Two additional concurrent clinical trials of the effect of Kengreal in patients undergoing percutaneous coronary intervention, CHAMPION PCI and CHAMPION PLATFORM were conducted and terminated early for futility. They were completed prior to the design and conduct of CHAMPION PHOENIX. The comparative characteristics and outcomes of each trial are shown in Table 4.

Kengreal is supplied as a sterile lyophilized powder in single-use 10 mL vials.

Kengreal® is a registered trademeark of Chiesi Farmaceutici S.p.A.