Discard vial and any unused portion of the drug product after use.

The recommended starting dosage of Giapreza is 20 nanograms (ng)/kg/min via continuous intravenous infusion. Administration through a central venous line is recommended.

Monitor blood pressure response and titrate Giapreza as frequently as every 5 minutes by increments of up to 15 ng/kg/min as needed to achieve or maintain target blood pressure. Do not exceed 80 ng/kg/min during the first 3 hours of treatment. Maintenance dose should not exceed 40 ng/kg/min. Doses as low as 1.25 ng/kg/min may be used.

Once the underlying shock has sufficiently improved, down-titrate every 5 to 15 minutes by increments of up to 15 ng/kg/min based on blood pressure.

Giapreza is a clear, aqueous solution.

The safety of Giapreza was evaluated in 321 adults with septic or other distributive shock in a randomized, double-blind, placebo-controlled study, ATHOS-3. There was a higher incidence of arterial and venous thrombotic and thromboembolic events in patients who received Giapreza compared to placebo-treated patients in the ATHOS-3 study (13% vs. 5%). The major imbalance was in deep venous thromboses. Use concurrent venous thromboembolism (VTE) prophylaxis.

The safety of Giapreza was evaluated in ATHOS-3 [see Warnings and Precautions(5.1)] . Patients in ATHOS-3 were receiving other vasopressors in addition to Giapreza or placebo, which were titrated to effect on mean arterial pressure (MAP).

Concomitant use of angiotensin converting enzyme (ACE) inhibitors may increase the response to Giapreza.

Concomitant use of angiotensin II receptor blockers (ARBs) may decrease the response to Giapreza.

The published data on angiotensin II use in pregnant women are not sufficient to determine a drug-associated risk of adverse developmental outcomes. Animal reproduction studies have not been conducted with Giapreza.

It is not known whether Giapreza is present in human milk. No data are available on the effects of angiotensin II on the breastfed child or the effects on milk production.

The safety and efficacy of Giapreza in pediatric patients have not been established.

In ATHOS-3, 48% of the total patient population was aged 65 years and older. There was no significant difference in safety or efficacy between patients less than 65 and those 65 years or older when treated with Giapreza .

Overdose of Giapreza would be expected to result in hypertension, necessitating close monitoring and supportive care. Effects are expected to be brief because the half-life of angiotensin II is less than one minute.

Angiotensin II is a naturally occurring peptide hormone of the renin-angiotensin-aldosterone system (RAAS) that causes vasoconstriction and an increase in blood pressure. Giapreza is a sterile, aqueous solution of synthetic human angiotensin II for intravenous administration by infusion. Each 1 mL of Giapreza contains 2.5 mg angiotensin II equivalent to an average of 2.9 mg angiotensin II acetate, 25 mg mannitol, and Water for Injection adjusted with sodium hydroxide and/or hydrochloric acid to pH of 5.5.

The chemical name of the synthetic angiotensin II acetate is L-Aspartyl-L-arginyl-L-valyl-Ltyrosyl-L-isoleucyl-L-histidyl-L-prolyl-L-phenylalanine, acetate salt. The counter ion acetate is present in a non-stoichiometric ratio. It is a white to off-white powder, soluble in water.

The structure of angiotensin II acetate is shown below.

For the 114 (70%) patients in the Giapreza arm who reached the target MAP at Hour 3, the median time to reach the target MAP endpoint was approximately 5 minutes. Giapreza is titrated to effect for each individual patient.

No specific studies were conducted that examined the distribution of Giapreza.

No specific studies were conducted that examined the metabolism and excretion of Giapreza.

No formal pharmacokinetic studies were conducted with Giapreza in the following specific populations.

The clearance of angiotensin II is not dependent on renal function. Therefore, the pharmacokinetics of Giapreza are not expected to be influenced by renal impairment.

The clearance of angiotensin II is not dependent on hepatic function. Therefore, the pharmacokinetics of Giapreza are not expected to be influenced by hepatic impairment.

The effect of age was analyzed in the 163 patients receiving Giapreza in ATHOS-3. There were no significant differences in pharmacokinetics between age groups (< 65 years / ≥ 65 years).

The effect of sex was analyzed in the 163 patients receiving Giapreza in ATHOS-3. There were no significant differences in pharmacokinetics between male and female patients.

No animal toxicology studies were conducted with Giapreza.

The Angiotensin II for the Treatment of High-Output Shock (ATHOS-3) trial was a double-blind study in which 321 adults with septic or other distributive shock who remained hypotensive despite fluid and vasopressor therapy were randomized 1:1 and treated with either Giapreza or placebo, both in addition to background vasopressor therapy. Doses of Giapreza or placebo were titrated to a target MAP of ≥ 75 mmHg during the first 3 hours of treatment while doses of other vasopressors were maintained. From Hour 3 to Hour 48, Giapreza or placebo were titrated to maintain MAP between 65 and 70 mmHg while reducing doses of other vasopressors. The primary endpoint was the percentage of subjects who achieved either a MAP ≥ 75 mmHg or a ≥ 10 mmHg increase in MAP without an increase in baseline vasopressor therapy at 3 hours.

91% of subjects had septic shock; the remaining subjects had other forms of distributive shock such as neurogenic shock. At the time of study drug administration, 97% of subjects were receiving norepinephrine, 67% vasopressin, 15% phenylephrine, 13% epinephrine, and 2% dopamine. 83% of subjects had received two or more vasopressors and 47% three or more vasopressors prior to study drug administration. 61% of subjects were male, 80% were White, 10% were Black, and 10% were other races. The median age of subjects was 64 years (range: 22-89 years). Patients requiring high doses of steroids, patients with a history of asthma or bronchospasm, and patients with Raynaud's syndrome were not included.

The primary endpoint was achieved by 70% of patients randomized to Giapreza compared to 23% of placebo subjects; p < 0.0001 (a treatment effect of 47%). Figure 1 shows the results in all patients and in selected subgroups. 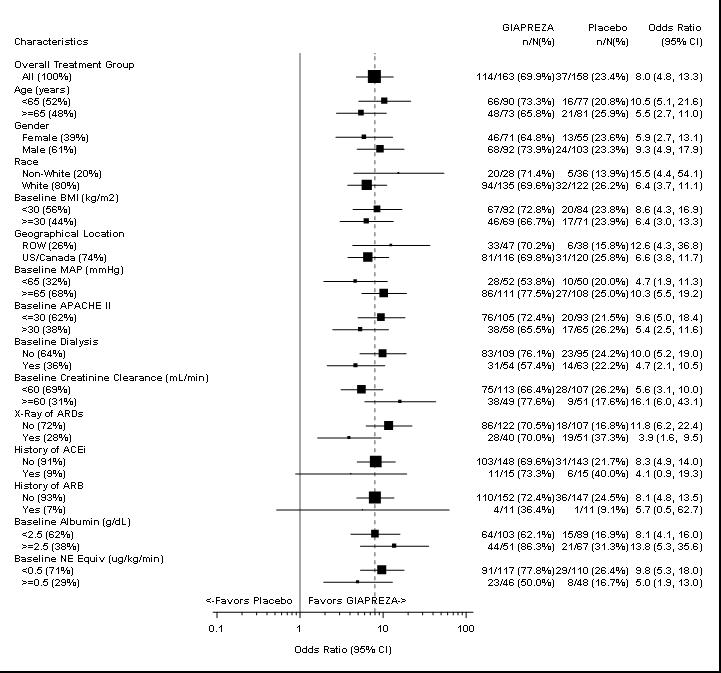 Note: The figure above presents effects in various subgroups, all of which are baseline characteristics. The 95% confidence limits that are shown do not take into account the number of comparisons made and may not reflect the effect of a particular factor after adjustment for all other factors. Apparent homogeneity or heterogeneity among groups should not be over-interpreted.

In the Giapreza-treated group, the median time to reach the target MAP endpoint was 5 minutes. The effect on MAP was sustained for at least the first three hours of treatment. The median dose of Giapreza was 10 ng/kg/min at 30 minutes. Of the 114 responders at Hour 3, only 2 (1.8%) received more than 80 ng/kg/min.

Giapreza (angiotensin II) Injection is a clear, aqueous solution for administration by intravenous infusion supplied as a single-dose vial: 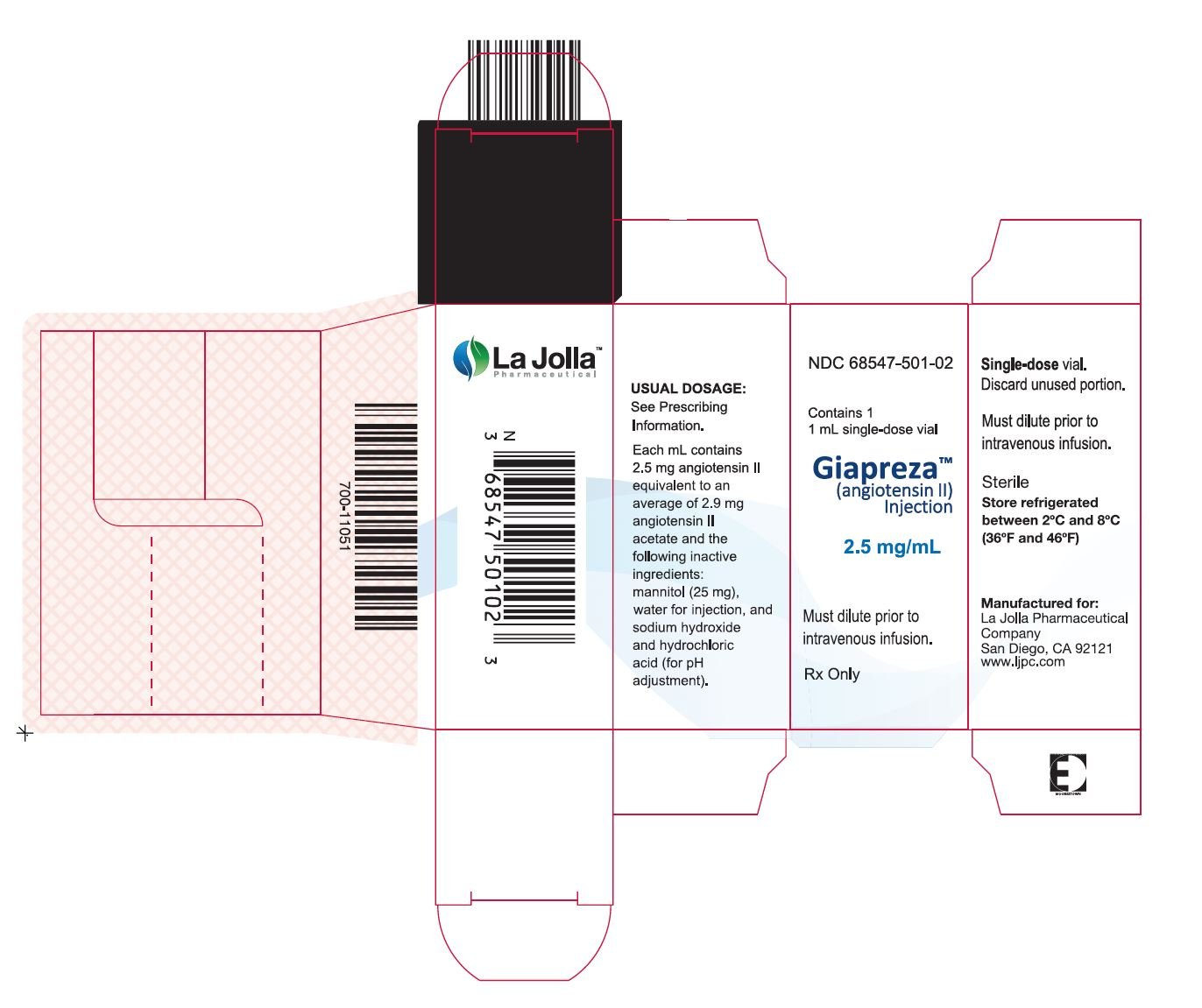