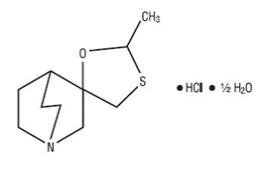 Cevimeline has a molecular weight of 244.79. It is a white to off white crystalline powder with a melting point range of 201 to 203oC. It is freely soluble in alcohol and chloroform, very soluble in water, and virtually insoluble in ether. The pH of a 1% solution ranges from 4.6 to 5.6. Inactive ingredients include lactose monohydrate, hydroxypropyl cellulose, and magnesium stearate.

Cevimeline is a cholinergic agonist which binds to muscarinic receptors. Muscarinic agonists in sufficient dosage can increase secretion of exocrine glands, such as salivary and sweat glands and increase tone of the smooth muscle in the gastrointestinal and urinary tracts.

Absorption: After administration of a single 30 mg capsule, cevimeline was rapidly absorbed with a mean time to peak concentration of 1.5 to 2 hours. No accumulation of active drug or its metabolites was observed following multiple dose administration. When administered with food, there is a decrease in the rate of absorption, with a fasting tMAX of 1.53 hours and a tMAX of 2.86 hours after a meal; the peak concentration is reduced by 17.3%. Single oral doses across the clinical dose range are dose proportional.

Distribution: Cevimeline has a volume of distribution of approximately 6L/kg and is <20% bound to human plasma proteins. This suggests that cevimeline is extensively bound to tissues; however, the specific binding sites are unknown.

Metabolism: Isozymes CYP2D6 and CYP3A3/4 are responsible for the metabolism of cevimeline. After 24 hours, 86.7% of the dose was recovered (16.0% unchanged, 44.5% as cis and trans-sulfoxide, 22.3% of the dose as glucuronic acid conjugate and 4% of the dose as N-oxide of cevimeline). Approximately 8% of the trans-sulfoxide metabolite is then converted into the corresponding glucuronic acid conjugate and eliminated. Cevimeline did not inhibit cytochrome P450 isozymes 1A2, 2A6, 2C9, 2C19, 2D6, 2E1, and 3A4.

Special Populations: The effects of renal impairment, hepatic impairment, or ethnicity on the pharmacokinetics of cevimeline have not been investigated.

Cevimeline has been shown to improve the symptoms of dry mouth in patients with Sjögren’s Syndrome.

A 6-week, randomized, double blind, placebo-controlled study was conducted in 75 patients
(10 men, 65 women) with a mean age of 53.6 years (range 33-75). The racial distribution was Caucasian 92%, Black 1 % and other 7%. The effects of cevimeline at 30 mg tid (90 mg/day) and 60 mg tid (180 mg/day) were compared to those of placebo. Patients were evaluated by a measure called global improvement, which is defined as a response of "better" to the question, "Please rate the overall condition of your dry mouth now compared with how you felt before starting treatment in this study." Patients also had the option of selecting "worse" or "no change" as answers. Seventy-six percent of the patients in the 30 mg tid group reported a global improvement in their dry mouth symptoms compared to 35% of the patients in the placebo group. This difference was statistically significant at p=0.0043. There was no evidence that patients in the 60 mg tid group had better global evaluation scores than the patients in the 30 mg tid group.

A 12-week, randomized, double-blind, placebo-controlled study was conducted in 197 patients (10 men, 187 women) with a mean age of 54.5 years (range 23-74). The racial distribution was Caucasian 91.4%, Black 3% and other 5.6%. The effects of cevimeline at 15 mg tid (45 mg/day) and 30 mg tid (90 mg/day) were compared to those of placebo. Statistically significant global improvement in the symptoms of dry mouth (p=0.0004) was seen for the 30 mg tid group compared to placebo, but not for the 15 mg group compared to placebo. Salivary flow showed statistically significant increases at both doses of cevimeline during the study compared to placebo.

A second 12-week, randomized, double-blind, placebo-controlled study was conducted in 212 patients (11 men, 201 women) with a mean age of 55.3 years (range 24-75). The racial distribution was Caucasian 88.7%, Black 1.9% and other 9.4%. The effects of cevimeline at 15 mg tid (45 mg/day) and 30 mg tid (90 mg/day) were compared to those of placebo. No statistically significant differences were noted in the patient global evaluations. However, there was a higher placebo response rate in this study compared to the aforementioned studies. The 30 mg tid group showed a statistically significant increase in salivary flow from pre-dose to
post-dose compared to placebo (p=0.0017).

Indications and Usage for Evoxac

Cevimeline is indicated for the treatment of symptoms of dry mouth in patients with Sjögren’s Syndrome.

Cevimeline is contraindicated in patients with uncontrolled asthma, known hypersensitivity to cevimeline, and when miosis is undesirable, e.g., in acute iritis and in narrow-angle (angle-closure) glaucoma.

Cevimeline can potentially alter cardiac conduction and/or heart rate. Patients with significant cardiovascular disease may potentially be unable to compensate for transient changes in hemodynamics or rhythm induced by Evoxac®. Evoxac® should be used with caution and under close medical supervision in patients with a history of cardiovascular disease evidenced by angina pectoris or myocardial infarction.

Ophthalmic formulations of muscarinic agonists have been reported to cause visual blurring which may result in decreased visual acuity, especially at night and in patients with central lens changes, and to cause impairment of depth perception. Caution should be advised while driving at night or performing hazardous activities in reduced lighting.

Cevimeline should be administered with caution to patients with a history of nephrolithiasis or cholelithiasis. Contractions of the gallbladder or biliary smooth muscle could precipitate complications such as cholecystitis, cholangitis and biliary obstruction. An increase in the ureteral smooth muscle tone could theoretically precipitate renal colic or ureteral reflux in patients with nephrolithiasis.

Patients should be informed that cevimeline may cause visual disturbances, especially at night, that could impair their ability to drive safely.

If a patient sweats excessively while taking cevimeline, dehydration may develop. The patient should drink extra water and consult a health care provider.

Cevimeline should be administered with caution to patients taking beta adrenergic antagonists, because of the possibility of conduction disturbances. Drugs with parasympathomimetic effects administered concurrently with cevimeline can be expected to have additive effects. Cevimeline might interfere with desirable antimuscarinic effects of drugs used concomitantly.

Drugs which inhibit CYP2D6 and CYP3A3/4 also inhibit the metabolism of cevimeline. Cevimeline should be used with caution in individuals known or suspected to be deficient in CYP2D6 activity, based on previous experience, as they may be at a higher risk of adverse events. In an in vitro study, cytochrome P450 isozymes 1A2, 2A6, 2C9, 2C19, 2D6, 2E1, and 3A4 were not inhibited by exposure to cevimeline.

Carcinogenesis, Mutagenesis and Impairment of Fertility:

Lifetime carcinogenicity studies were conducted in CD-1 mice and F-344 rats. A statistically significant increase in the incidence of adenocarcinomas of the uterus was observed in female rats that received cevimeline at a dosage of 100 mg/kg/day (approximately 8 times the maximum human exposure based on comparison of AUC data). No other significant differences in tumor incidence were observed in either mice or rats.

Cevimeline exhibited no evidence of mutagenicity or clastogenicity in a battery of assays that included an Ames test, an in vitro chromosomal aberration study in mammalian cells, a mouse lymphoma study in L5178Y cells, or a micronucleus assay conducted in vivo in ICR mice.

Cevimeline did not adversely affect the reproductive performance or fertility of male Sprague-Dawley rats when administered for 63 days prior to mating and throughout the period of mating at dosages up to 45 mg/kg/day (approximately 5 times the maximum recommended dose for a 60 kg human following normalization of the data on the basis of body surface area estimates). Females that were treated with cevimeline at dosages up to 45 mg/kg/day from 14 days prior to mating through day seven of gestation exhibited a statistically significantly smaller number of implantations than did control animals.

Cevimeline was associated with a reduction in the mean number of implantations when given to pregnant Sprague-Dawley rats from 14 days prior to mating through day seven of gestation at a dosage of 45 mg/kg/day (approximately 5 times the maximum recommended dose for a 60 kg human when compared on the basis of body surface area estimates). This effect may have been secondary to maternal toxicity. There are no adequate and well-controlled studies in pregnant women. Cevimeline should be used during pregnancy only if the potential benefit justifies the potential risk to the fetus.

It is not known whether this drug is secreted in human milk. Because many drugs are excreted in human milk, and because of the potential for serious adverse reactions in nursing infants from Evoxac®, a decision should be made whether to discontinue nursing or discontinue the drug, taking into account the importance of the drug to the mother.

Although clinical studies of cevimeline included subjects over the age of 65, the numbers were not sufficient to determine whether they respond differently from younger subjects. Special care should be exercised when cevimeline treatment is initiated in an elderly patient, considering the greater frequency of decreased hepatic, renal, or cardiac function, and of concomitant disease or other drug therapy in the elderly.

Cevimeline was administered to 1777 patients during clinical trials worldwide, including Sjögren’s patients and patients with other conditions. In placebo-controlled Sjögren’s studies in the U.S., 320 patients received cevimeline doses ranging from 15 mg tid to 60 mg tid, of whom 93% were women and 7% were men. Demographic distribution was 90% Caucasian, 5% Hispanic, 3% Black and 2% of other origin. In these studies, 14.6% of patients discontinued treatment with cevimeline due to adverse events.

The following adverse events associated with muscarinic agonism were observed in the clinical trials of cevimeline in Sjögren’s syndrome patients:

* n Is the total number of patients exposed to the dose at any time during the study.

In addition, the following adverse events (≥3% incidence) were reported in the Sjögren’s clinical trials:

* n is the total number of patients exposed to the dose at any time during the study.

In one subject with lupus erythematosus receiving concomitant multiple drug therapy, a highly elevated ALT level was noted after the fourth week of cevimeline therapy. In two other subjects receiving cevimeline in the clinical trials, very high AST levels were noted. The significance of these findings is unknown.

Additional adverse events (relationship unknown) which occurred in other clinical studies (patient population different from Sjögren’s patients) are as follows:

The following adverse reaction has been identified during post-approval use of Evoxac®. Because post-marketing adverse reactions are reported voluntarily from a population of uncertain size, it is not always possible to reliably estimate their frequency or establish a causal relationship to drug exposure.

Management of the signs and symptoms of acute overdosage should be handled in a manner consistent with that indicated for other muscarinic agonists: general supportive measures should be instituted. If medically indicated, atropine, an anti-cholinergic agent, may be of value as an antidote for emergency use in patients who have had an overdose of cevimeline. If medically indicated, epinephrine may also be of value in the presence of severe cardiovascular depression or bronchoconstriction. It is not known if cevimeline is dialyzable.

How is Evoxac Supplied

Evoxac® is available as white, hard gelatin capsules containing 30 mg of cevimeline hydrochloride. Evoxac® capsules have a white opaque cap and a white opaque body. The capsules are imprinted with “Evoxac” on the cap and “30 mg” on the body with a black bar above “30 mg”. It is supplied in child resistant bottles of: 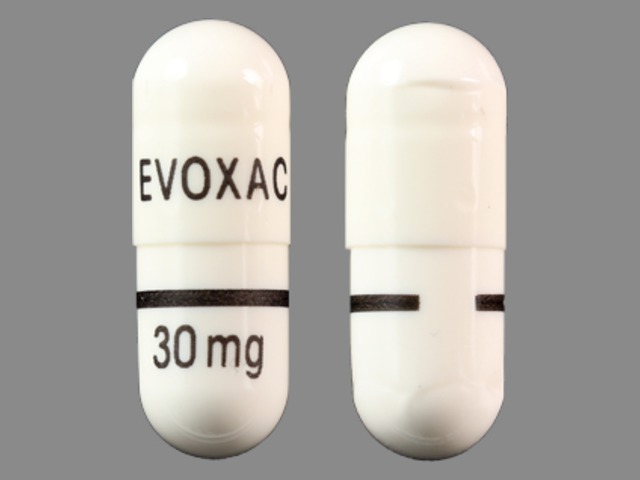