Emerphed is indicated for the treatment of clinically important hypotension occurring in the setting of anesthesia.

Emerphed is a clear, colorless solution. Do not use if the solution is not clear or if particulate matter is present.

The recommended dosages for the treatment of clinically important hypotension in the setting of anesthesia is an initial dose of 5 mg to 10 mg administered by intravenous bolus. Administer additional boluses as needed, not to exceed a total dosage of 50 mg.

Data indicate that repeated administration of ephedrine can result in tachyphylaxis. Be aware of this possibility when treating anesthesia-induced hypotension with Emerphed and be prepared with an alternative pressor to mitigate unacceptable responsiveness.

Risk of Hypertension When Used Prophylactically

When used to prevent hypotension, ephedrine has been associated with an increased incidence of hypertension compared with when ephedrine is used to treat hypotension.

The following adverse reactions associated with the use of ephedrine sulfate were identified in the literature. Because these reactions are reported voluntarily from a population of uncertain size, it is not always possible to estimate their frequency reliably or to establish a causal relationship to drug exposure.

Available data from randomized studies, case series, and reports of ephedrine sulfate use in pregnant women have not identified a drug-associated risk of major birth defects, miscarriage, or adverse maternal or fetal outcomes. However, there are clinical considerations [see Clinical Considerations]. In animal reproduction studies, decreased fetal survival and fetal body weights were observed in the presence of maternal toxicity after normotensive pregnant rats were administered 60 mg/kg intravenous ephedrine sulfate (12 times the maximum recommended human dose (MRHD) of 50 mg/day). No malformations or embryofetal adverse effects were observed when pregnant rats or rabbits were treated with intravenous bolus doses of ephedrine sulfate during organogenesis at doses 1.9 and 7.7 times the MRHD, respectively [See data].

Cases of potential metabolic acidosis in newborns at delivery with maternal ephedrine exposure have been reported in the literature. These reports describe umbilical artery pH of ≤7.2 at the time of delivery [see Clinical Pharmacology 12.3]. Monitoring of the newborn for signs and symptoms of metabolic acidosis may be required. Monitoring of infant's acid-base status is warranted to ensure that an episode of acidosis is acute and reversible.

Decreased fetal body weights were observed when pregnant rats were administered intravenous bolus doses of 60 mg/kg ephedrine sulfate (12 times the maximum recommended human dose (MRHD) of 50 mg based on body surface area) from Gestation Day 6-17. This dose was associated with evidence of maternal toxicity (decreased body weight of dams and abnormal head movements). No malformations or fetal deaths were noted at this dose. No effects on fetal body weight were noted at 10 mg/kg (1.9 times the MRHD of 50 mg).

Decreased fetal survival and body weights in the presence of maternal toxicity (increased mortality) were noted when pregnant dams were administered intravenous bolus doses of 60 mg/ kg epinephrine sulfate (approximately 12 times the MRHD based on body surface area) from GD 6 through Lactation Day 20. No adverse effects were noted at 10 mg/kg (1.9 times the MRHD).

A single published case report indicates that ephedrine is present in human milk. However, no information is available on the effects of the drug on the breastfed infant or the effects of the drug on milk production. The developmental and health benefits of breastfeeding should be considered along with the mother's clinical need for Emerphed and any potential adverse effects on the breastfed child from Emerphed or from the underlying maternal condition.

Safety and effectiveness of Emerphed in pediatric patients have not been established.

In a study in which juvenile rats were administered intravenous bolus doses of 2, 10, or 60 mg/kg ephedrine sulfate daily from Postnatal Day 35 to 56, an increased incidence of mortality was noted at the high dose of 60 mg/kg. The no-adverse-effect level was 10 mg/kg (approximately 1.9 times a maximum daily dose of 50 mg in a 60 kg person based on body surface area)

Clinical studies of ephedrine did not include sufficient numbers of subjects aged 65 and over to determine whether they respond differently from younger subjects. Other reported clinical experience has not identified differences in responses between the elderly and younger patients. In general, dose selection for an elderly patient should be cautious, usually starting at the low end of the dosing range, reflecting the greater frequency of decreased hepatic, renal, or cardiac function, and of concomitant disease or other drug therapy.

This drug is known to be substantially excreted by the kidney, and the risk of adverse reactions to this drug may be greater in patients with impaired renal function. Because elderly patients are more likely to have decreased renal function, care should be taken in dose selection, and it may be useful to monitor renal function.

Ephedrine and its metabolite are excreted in urine. In patients with renal impairment, excretion of ephedrine is likely to be affected with a corresponding increase in elimination half-life, which will lead to slow elimination of ephedrine and consequently prolonged pharmacological effect and potentially adverse reactions. Monitor patients with renal impairment carefully after the initial bolus dose for adverse events.

Overdose of Emerphed can cause a rapid rise in blood pressure. In the case of an overdose, careful monitoring of blood pressure is recommended. If blood pressure continues to rise to an unacceptable level, parenteral antihypertensive agents can be administered at the discretion of the clinician.

Emerphed (ephedrine sulfate) injection is a clear, colorless, sterile solution for intravenous injection. The chemical name of ephedrine sulfate is benzenemethanol, α-[1-(methylamino)ethyl]-, [R-(R*,S*)]-, sulfate (2:1) (salt), and the molecular weight is 428.5 g/mol. Its structural formula is depicted below:

Ephedrine sulfate is a sympathomimetic amine that directly acts as an agonist at α- and β-adrenergic receptors and indirectly causes the release of norepinephrine from sympathetic neurons. Pressor effects by direct alpha- and beta-adrenergic receptor activation are mediated by increases in arterial pressures, cardiac output, and peripheral resistance. Indirect adrenergic stimulation is caused by norepinephrine release from sympathetic nerves.

Tachyphylaxis to the pressor effects of ephedrine may occur with repeated administration [see Warnings and Precautions 5.2].

Ephedrine crosses the placental barrier [see Use in Specific Populations 8.1].

Carcinogenesis: Two-year feeding studies in rats and mice conducted under the National Toxicology Program (NTP) demonstrated no evidence of carcinogenic potential with ephedrine sulfate at doses up to 10 mg/kg/day and 27 mg/kg/day (approximately 2 times and 3 times the maximum human recommended dose on a mg/m2 basis, respectively).

Impairment of Fertility: There was no impact on fertility or early embryonic development in a study in which male rats were administered intravenous bolus doses of 0, 2, 10, or 60 mg/kg ephedrine sulfate (up to 12 times the maximum recommended human dose of 50 mg based on body surface area) for 28 days prior to mating and through gestation and females were treated for 14 days prior to mating through Gestation Day 7.

The evidence for the efficacy of Emerphed (ephedrine sulfate) injection is derived from the published literature. Increases in blood pressure following administration of ephedrine were observed in 14 studies, including 9 where ephedrine was used in pregnant women undergoing neuraxial anesthesia during Cesarean delivery, 1 study in non-obstetric surgery under neuraxial anesthesia, and 4 studies in patients undergoing surgery under general anesthesia. Ephedrine has been shown to raise systolic and mean blood pressure when administered as a bolus dose following the development of hypotension during anesthesia.

Store in carton until time of use. For single dose only. Discard unused portion.

Manufactured in Italy for:

Premixed formulation -
Do not dilute 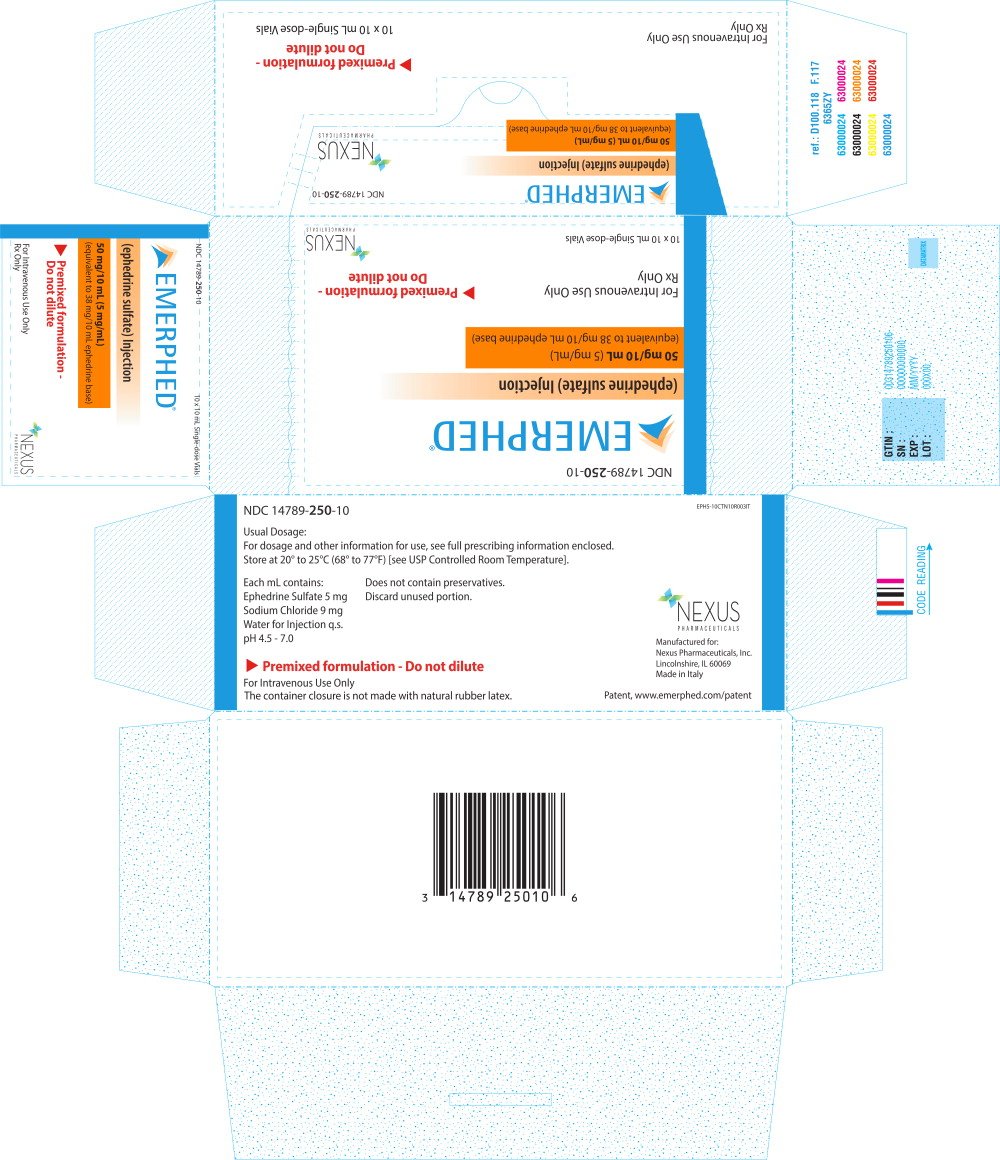 Premixed formulation –Do not dilute