Serious cardiopulmonary reactions, including fatalities, have occurred uncommonly during or following perflutren-containing microsphere administration [see WARNINGS AND PRECAUTIONS (5.1)]. Most serious reactions occur within 30 minutes of administration.

Indications and Usage for Definity

Definity® is intended for administration only after activation in the VIALMIX® apparatus. Before injection, this product must be activated and prepared according to the instructions outlined below. The VIALMIX® apparatus should be ordered from Lantheus Medical Imaging, 331 Treble Cove Road, North Billerica, MA, 01862. For customer orders call 1-800-299-3431.

Definity® may be injected by either an intravenous (IV) bolus or infusion. The maximum dose is either two bolus doses or one single intravenous infusion. The safety of bolus and infusion dosing in combination or in sequence, has not been studied.

The recommended bolus dose for activated Definity® is 10 microliters (microL)/kg of the activated product by intravenous bolus injection within 30-60 seconds, followed by a 10 mL saline flush. If necessary, a second 10 microliters (microL)/kg dose followed by a second 10 mL saline flush may be administered 30 minutes after the first injection to prolong contrast enhancement.

The recommended infusion dose for activated Definity® is via an IV infusion of 1.3 mL added to 50 mL of preservative-free saline. The rate of infusion should be initiated at 4.0 mL/minute, but titrated as necessary to achieve optimal image enhancement, not to exceed 10 mL/minute.

In a crossover trial of 64 patients randomized to both bolus and infusion, the duration of clinically useful contrast enhancement for fundamental imaging was approximately 3.4 minutes after a 10 microL/kg bolus and was approximately 7.1 minutes during the continuous infusion of 1.3 mL activated Definity® in 50 mL saline at a rate of 4 mL/min.

For single use only: Definity® does not contain bacterial preservative. Bacterial contamination with the risk of post-administration septicemia can occur following the puncture of the elastomeric septum. It is essential to follow directions for activation of Definity® carefully and to adhere to strict aseptic procedures during preparation.

Definity® is supplied as a single use 2 mL clear glass vial containing a clear liquid. in packages of four (4) and sixteen (16) single-use vials.

Do not administer Definity® to patients with known or suspected:

Do not administer Definity® by intra-arterial injection.

In postmarketing use, uncommon but serious anaphylactoid reactions were observed during or shortly following perflutren-containing microsphere administration including:

Systemic Embolization of Definity® in Patients with Cardiac Shunts:

In patients with right-to-left, bi-directional, or transient right-to-left cardiac shunts phospholipid-encapsulated microspheres can bypass the pulmonary particle-filtering mechanisms and directly enter the arterial circulation resulting in microvascular occlusion and ischemia. In an animal study utilizing intra-arterial administration of activated Definity®, microsphere trapping was seen in small arterioles <15 µm, especially at branch points and in capillaries at all doses tested, including doses directly applicable to those used in humans. An animal study utilizing intravenous administration did not result in arterial microvascular obstruction presumably because of filtering by the lungs. Do not administer Definity® by intra-arterial injection [see CONTRAINDICATIONS (4)].

High ultrasound mechanical index values may cause microsphere cavitation or rupture and lead to ventricular arrhythmias. Additionally, end-systolic triggering with high mechanical indices has been reported to cause ventricular arrhythmias. The safety of activated Definity® at mechanical indices greater than 0.8 has not been evaluated [see DOSAGE AND ADMINISTRATION (2)]. The safety of activated Definity® with the use of end-systolic triggering has not been evaluated.

ECG parameters for doses up to 10 microL/kg were monitored in 221 subjects at multiple time points from 1 hour to 72 hours after the first bolus injection. In the 221 subjects, QTc prolongations of >30 msec were noted in 64 (29%) subjects. Forty-six out of 64 subjects with QTc prolongations were further evaluated and 39% (18/46) showed associated cardiac rhythm changes. The effects of concomitant drugs were not studied.

Among the 1716 activated Definity® patients, 19 (1.1%) suffered serious cardiopulmonary adverse events including eight deaths. The deaths occurred several days after activated Definity® administration and appeared to be related to the course of underlying disease. Of the 11 other serious adverse events, which appeared within days of the drug administration (2-15 days), all appeared to be a progression underlying cardiac and non-cardiac disease. However, a role for Definity® in the initiation or course of these adverse events cannot be ruled out.

There were 15 discontinuations reported with a mean age of 41.5 years. Nine of these patients were discontinued after the first injection. One patient experienced a hypersensitivity reaction with urticaria and pruritus and all the other patients experienced dizziness, chest pain, dyspnea or back pain. These adverse reactions appeared within minutes (1 – 15 min) of the drug administration and were of moderate intensity resolving usually without treatment within minutes or hours after onset.

Other adverse reactions that occurred in ≤0.5% of the activated Definity®-dosed subjects were:

In a prospective, multicenter, open-label registry of 1053 patients receiving Definity® in routine clinical practice, heart rate, respiratory rate, and pulse oximetry were monitored for 30 minutes after Definity® administration. No deaths or serious adverse reactions were reported, suggesting that these reactions are unlikely to occur at a rate of more than 0.3% when Definity® is used according to recommendations.

The following adverse reactions have been identified during the post-marketing use of perflutren-containing microsphere products. Because these reactions are reported voluntarily from a population of uncertain size, it is not always possible to reliably estimate their frequency or establish a causal relationship to drug exposure.

Drug-drug interactions for activated Definity® have not been studied.

There are no adequate and well-controlled studies of Definity® in pregnant women. Reproduction studies performed in rats and rabbits at doses up to 24 and 15 times the human dose based on body surface area (in rats and rabbits respectively) revealed no evidence of impaired fertility or harm to the fetus due to Definity®. Because animal reproduction studies are not always predictive of human response, this drug should be used during pregnancy only if clearly needed.

The safety and effectiveness of activated Definity® have not been established in the pediatric population.

The safety of injecting activated Definity® in neonates and infants with immature pulmonary vasculature has not been studied.

The pharmacokinetics of activated Definity® in pediatric subjects has not been studied.

In clinical trials, the overall incidence of adverse reactions was similar for the <65 year age group and the ≥65 year age group. Of the total number of subjects in clinical trials of Definity®, 144 (33%) were 65 and over. No overall differences in safety or effectiveness were observed between these subjects and younger subjects, and other reported clinical experience has not identified differences in responses between the elderly and younger patients, but greater sensitivity of some older individuals cannot be ruled out.

The overall incidence of adverse reactions was similar between males and females.

The overall incidence of adverse reactions was similar among all racial and ethnic groups.

The clinical consequences of overdosing with activated Definity® are not known. Treatment of an overdose should be directed toward the support of all vital functions and prompt institution of symptomatic therapy [see CONTRAINDICATIONS (4) and WARNINGS AND PRECAUTIONS (5)].

Definity® (Perflutren Lipid Microsphere) Injectable Suspension is an ultrasound contrast agent. The Definity® vial contains components that upon activation yield perflutren lipid microspheres, a diagnostic drug that is intended to be used for contrast enhancement during the indicated echocardiographic procedures. The vial contains a clear, colorless, sterile, non-pyrogenic, hypertonic liquid, which upon activation with the aid of a VIALMIX®, provides a homogeneous, opaque, milky white injectable suspension of perflutren lipid microspheres. The suspension of activated Definity® is administered by intravenous injection.

Octafluoropropane is chemically characterized as 1,1,1,2,2,3,3,3-octafluoropropane. It has a molecular weight of 188, empirical formula of C3F8 and has the following structural formula: 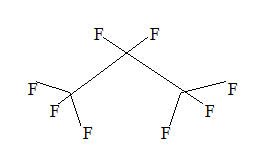 DPPA has a molecular weight of 670, empirical formula of C35H68O8PNa, and following structural formula:

DPPC has a molecular weight of 734, empirical formula of C40H80NO8P, and following structural formula:

MPEG5000 DPPE has an approximate molecular weight of 5750 represented by empirical formula C265H527NO123PNa, and the following structural formula:

After activating the contents of the vial in a VIALMIX®, each mL of the milky white suspension contains a maximum of 1.2 × 1010 perflutren lipid microspheres, and about 150 microL/mL (1.1 mg/mL) octafluoropropane. The microsphere particle size parameters are listed in Table 11.1 below:

Human pharmacokinetics information is not available for the intact or degassed lipid microspheres. The pharmacokinetics of octafluoropropane gas (OFP) was evaluated in healthy subjects (n=8) after the IV administration of activated Definity® at a 50 microL/kg dose.

OFP gas binding to plasma proteins or partitioning into blood cells has not been studied. However, OFP protein binding is expected to be minimal due to its low partition coefficient into whole blood.

OFP is a stable gas that is not metabolized. The phospholipid components of the microspheres are thought to be metabolized to free fatty acids.

OFP was not detectable after 10 minutes in most subjects either in the blood or in expired air. OFP concentrations in blood were shown to decline in a mono-exponential fashion with a mean half-life of 1.3 minutes in healthy subjects.

The pharmacokinetics of octafluoropropane gas (OFP) was evaluated in subjects (n=11) with chronic obstructive pulmonary disease (COPD). The mean half-life of OFP in blood was 1.9 minutes. The total lung clearance of OFP was similar to that in healthy subjects.

The pharmacokinetics of activated Definity® has not been studied in subjects with hepatic diseases or congestive heart failure.

Studies with activated Definity® have not been performed to evaluate carcinogenic potential. Evidence of genotoxicity was not found in the following studies with activated Definity®: 1) bacterial mutagenesis assay (Ames assay), 2) in vitro mammalian mutagenesis assay, 3) in vitro human lymphocyte chromosome aberration assay, and 4) in vivo rat micronucleus assay.

In the baseline controlled studies, a total of 126 (67 in study A and 59 in study B) subjects received a bolus dose of 10 microL/kg activated Definity®. The outcome measures in these studies included the blinded assessment of ejection fraction (EF), endocardial border length (EBL) obtained by direct measurement, and qualitative assessment of wall motion.

Left ventricular chamber enhancement after an activated Definity® dose of 10 microL/kg was significantly increased from baseline compared to placebo in both views at the mid-ventricular and apical levels at end-diastole. Similar results were noted at end-systole, with the exception of the 4-chamber view.

In the 2 baseline controlled studies, ejection fraction results were evaluated in comparison to MRI. The results were evaluated by 3 blinded, independent radiologists. In these studies, although there was a statistically significant increase in ventricular chamber enhancement, activated Definity® did not significantly improve the assessment of ejection fraction compared to the baseline images.

In an open administration, crossover trial, 64 patients were randomized to receive both bolus (10 microL/kg) and infusion (1.3 mL activated Definity® in 50 mL saline at the rate of 4 mL/min) dosing of activated Definity®. Outcome measures for this study included clinically useful ventricular cavity enhancement and endocardial border length. Similar results were seen as described above.

Optimal activated Definity® doses and device settings for harmonic imaging have not been established.

The impact of Definity® on pulmonary hemodynamics was explored in a prospective, open-label study of patients with normal (≤ 35 mmHg, 16 patients) and elevated (> 35 mmHg, ≤ 75 mmHg, 16 patients) pulmonary artery systolic pressure undergoing right heart catheterization. Patients with pulmonary artery systolic pressure greater than 75 mmHg were excluded from this study. Systemic hemodynamic parameters and ECGs were also evaluated. No clinically important pulmonary hemodynamic, systemic hemodynamic, or ECG changes were observed. This study did not assess the effect of Definity® on visualization of cardiac or pulmonary structures.

Definity® is supplied as a single use 2-mL clear glass vial containing clear liquid in packages of four (4) and sixteen (16) single-use vials.

FOR SINGLE USE ONLY: Definity® does not contain bacterial preservative. Bacterial contamination with the risk of post-administration septicemia can occur following the puncture of the elastomeric septum. It is essential to follow directions for activation of Definity® carefully and to adhere to strict aseptic procedures during preparation.

Patients receiving activated Definity® should be instructed to inform their healthcare provider if they:

For Intravenous Use Only, After Activation
Store refrigerated, 2–8° C (36–46° F)
For Single Use Only, Discard Unused Portion
Use within 12 hours of activation (see Insert)
IMPORTANT: Read enclosed Package Insert for full information on preparation, use and indications.
CONTAINS NO BACTERIOSTATIC PRESERVATIVE 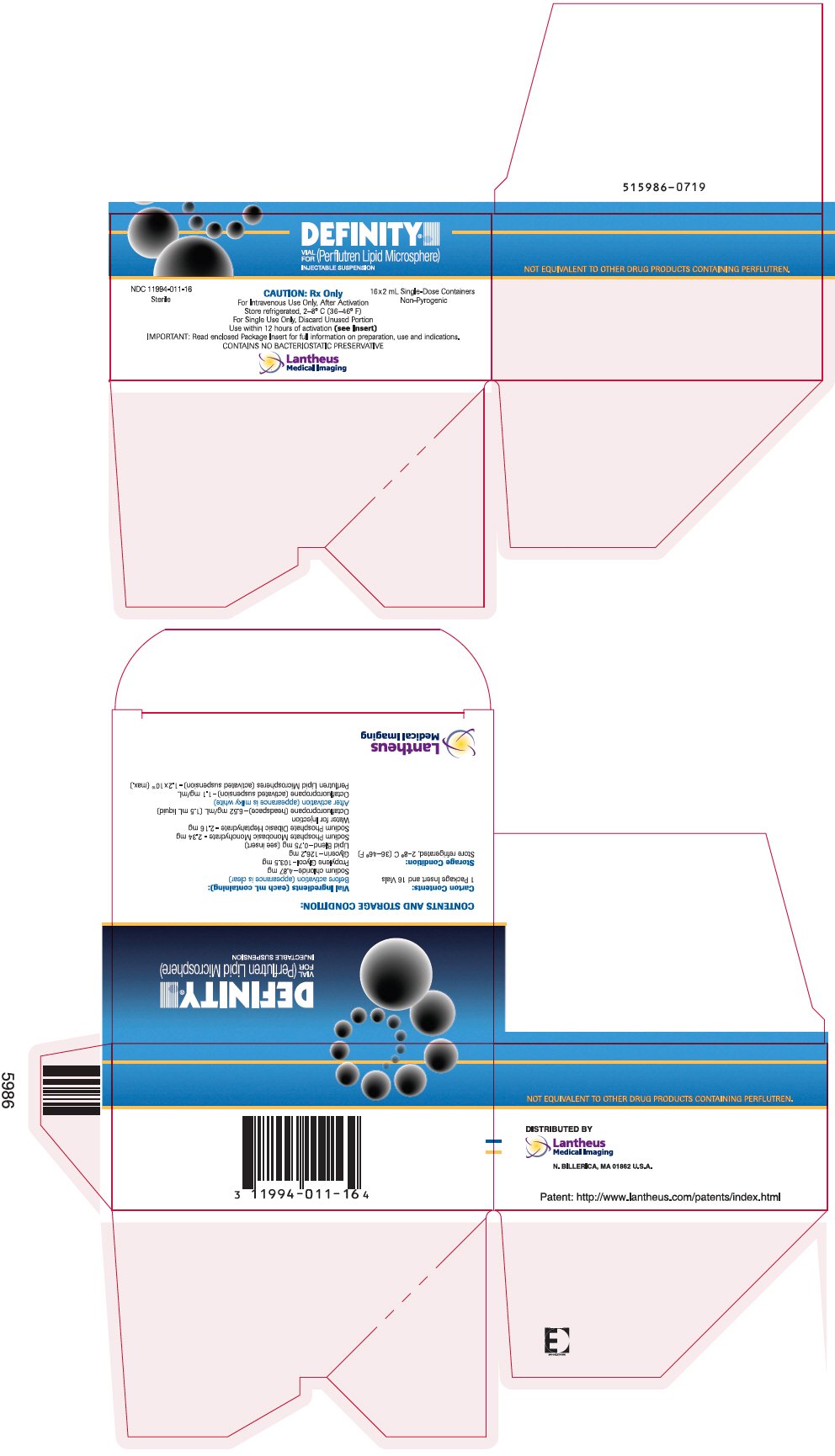