Serious cardiopulmonary reactions, including fatalities, have occurred uncommonly during or following perflutren-containing microsphere administration [see Warnings and Precautions (5.1)]. Most serious reactions occur within 30 minutes of administration.

Indications and Usage for Definity RT

The recommended bolus dose for activated Definity RT is 10 microliters (microL)/kg of the activated product by intravenous bolus injection within 30 to 60 seconds, followed by a 10 mL 0.9% Sodium Chloride Injection, USP flush. If necessary, a second 10 microliters (microL)/kg dose followed by a second 10 mL 0.9% Sodium Chloride Injection, USP flush may be administered 30 minutes after the first injection to prolong contrast enhancement.

The recommended infusion dose for activated Definity RT is via an intravenous infusion of 1.3 mL added to 50 mL of preservative-free 0.9% Sodium Chloride Injection, USP. The rate of infusion should be initiated at 4 mL/minute, but titrated as necessary to achieve optimal image enhancement, not to exceed 10 mL/minute.

In a crossover trial of 64 patients randomized to both bolus and infusion using DEFINITY, the duration of clinically useful contrast enhancement for fundamental imaging was approximately 3.4 minutes after a 10 microL/kg bolus and was approximately 7.1 minutes during the continuous infusion of 1.3 mL activated DEFINITY in 50 mL 0.9% Sodium Chloride Injection, USP at a rate of 4 mL/min.

There are two formulations of perflutren lipid microspheres that have differences concerning storage and preparation. Follow the preparation and storage procedures, as well as directions for activation of Definity RT carefully and adhere to strict aseptic procedures during preparation.

Do not administer Definity RT to patients with known or suspected:

Serious cardiopulmonary reactions including fatalities have occurred uncommonly during or shortly following perflutren-containing microsphere administration, typically within 30 minutes of administration. The risk for these reactions may be increased among patients with unstable cardiopulmonary conditions (acute myocardial infarction, acute coronary artery syndromes, worsening or unstable congestive heart failure, or serious ventricular arrhythmias). Always have cardiopulmonary resuscitation personnel and equipment readily available prior to Definity RT administration and monitor all patients for acute reactions.

In postmarketing use, serious hypersensitivity reactions were observed during or shortly following perflutren-containing microsphere administration including:

Other adverse reactions that occurred in ≤0.5% of the activated DEFINITY-dosed subjects were:

In a prospective, multicenter, open-label registry of 1053 patients receiving DEFINITY in routine clinical practice, heart rate, respiratory rate, and pulse oximetry were monitored for 30 minutes after DEFINITY administration. No deaths or serious adverse reactions were reported, suggesting that these reactions are unlikely to occur at a rate of more than 0.3% when DEFINITY is used according to recommendations.

The following adverse reactions have been identified during the post-marketing use of perflutren and PEG-containing microsphere products. Because these reactions are reported voluntarily from a population of uncertain size, it is not always possible to reliably estimate their frequency or establish a causal relationship to drug exposure.

Available data from case reports with DEFINITY use in pregnant women have not identified a drug-associated risk of major birth defects, miscarriage, or adverse maternal or fetal outcomes. Definity RT has a very short half-life; therefore, administration of Definity RT to a pregnant woman is not expected to result in clinically relevant fetal exposure. No adverse developmental outcomes were observed in animal reproduction studies with administration of activated DEFINITY in pregnant rats and rabbits during organogenesis at doses up to 8 and 16 times, respectively, the maximum human dose based on body surface area (see Data).

The safety and effectiveness of activated Definity RT have not been established in the pediatric population.

The safety of injecting activated Definity RT in neonates and infants with immature pulmonary vasculature has not been studied.

The pharmacokinetics of activated Definity RT in pediatric subjects has not been studied.

In clinical trials, the overall incidence of adverse reactions was similar for the <65 year age group and the ≥65 year age group. Of the total number of subjects in clinical trials of DEFINITY, 144 (33%) were 65 and over. No overall differences in safety or effectiveness were observed between these subjects and younger subjects, and other reported clinical experience has not identified differences in responses between the elderly and younger patients, but greater sensitivity of some older individuals cannot be ruled out.

Octafluoropropane is chemically characterized as 1,1,1,2,2,3,3,3-octafluoropropane. It has a molecular weight of 188, empirical formula of C3F8 and has the following structural formula:

DPPA has a molecular weight of 670, empirical formula of C35H68O8PNa, and following structural formula:

DPPC has a molecular weight of 734, empirical formula of C40H80NO8P, and following structural formula:

Prior to activation, the Definity RT vial contains 6.52 mg/mL octafluoropropane in the headspace which is confirmed by positive IR spectroscopic testing in every vial. Each mL of the viscous solution contains 3.75 mg lipid blend (consisting of 0.225 mg DPPA, 2.005 mg DPPC, and 1.520 mg MPEG5000 DPPE), 517.5 mg propylene glycol, 631 mg glycerin, 0.370 mg anhydrous sodium acetate, and 0.030 mg glacial acetic acid. The pH is 5.2 to 6.4. Definity RT does not contain bacterial preservative.

After activating the contents of the vial in a VIALMIX RFID and diluting with 1.4 mL of preservative-free 0.9% Sodium Chloride, Injection, USP, each mL of the milky white suspension contains 0.045 mg DPPA, 0.401 mg DPPC, 0.304 mg MPEG5000 DPPE, 0.074 mg anhydrous sodium acetate, 0.006 mg glacial acetic acid, a maximum of 1.2 × 1010 perflutren lipid microspheres, and about 80 microL/mL (0.65 mg/mL) octafluoropropane. The microsphere particle size parameters are listed in Table 2 below:

Human pharmacokinetics information is not available for the intact or degassed lipid microspheres. The pharmacokinetics of octafluoropropane gas (OFP) was evaluated in healthy subjects (n=8) after the intravenous administration of activated DEFINITY at a 50 microL/kg dose.

OFP gas binding to plasma proteins or partitioning into blood cells has not been studied. However, OFP protein binding is expected to be minimal due to its low partition coefficient into whole blood.

OFP is a stable gas that is not metabolized. The phospholipid components of the microspheres are thought to be metabolized to free fatty acids.

OFP was not detectable after 10 minutes in most subjects either in the blood or in expired air. OFP concentrations in blood were shown to decline in a mono-exponential fashion with a mean half-life of 1.3 minutes in healthy subjects.

The pharmacokinetics of octafluoropropane gas (OFP) was evaluated in subjects (n=11) with chronic obstructive pulmonary disease (COPD). The mean half-life of OFP in blood was 1.9 minutes. The total lung clearance of OFP was similar to that in healthy subjects.

The pharmacokinetics of activated Definity RT has not been studied in subjects with hepatic diseases or congestive heart failure.

Studies with activated DEFINITY have not been performed to evaluate carcinogenic potential. Evidence of genotoxicity was not found in the following studies with activated DEFINITY: 1) bacterial mutagenesis assay (Ames assay), 2) in vitro mammalian mutagenesis assay, 3) in vitro human lymphocyte chromosome aberration assay, and 4) in vivo rat micronucleus assay.

In the baseline controlled studies, a total of 126 (67 in study A and 59 in study B) subjects received a bolus dose of 10 microL/kg activated DEFINITY. The outcome measures in these studies included the blinded assessment of ejection fraction (EF), endocardial border length (EBL) obtained by direct measurement, and qualitative assessment of wall motion.

Left ventricular chamber enhancement after an activated DEFINITY dose of 10 microL/kg was significantly increased from baseline compared to placebo in both views at the mid-ventricular and apical levels at end-diastole. Similar results were noted at end-systole, with the exception of the 4-chamber view.

In the 2 baseline controlled studies, ejection fraction results were evaluated in comparison to MRI. The results were evaluated by 3 blinded, independent radiologists. In these studies, although there was a statistically significant increase in ventricular chamber enhancement, activated DEFINITY did not significantly improve the assessment of ejection fraction compared to the baseline images.

In an open administration, crossover trial, 64 patients were randomized to receive both bolus (10 microL/kg) and infusion (1.3 mL activated DEFINITY in 50 mL 0.9% Sodium Chloride Injection, USP at the rate of 4 mL/min) dosing of activated DEFINITY. Outcome measures for this study included clinically useful ventricular cavity enhancement and endocardial border length. Similar results were seen as described above.

Optimal activated DEFINITY doses and device settings for harmonic imaging have not been established.

The impact of DEFINITY on pulmonary hemodynamics was explored in a prospective, open-label study of patients with normal (≤ 35 mmHg, 16 patients) and elevated (> 35 mmHg, ≤ 75 mmHg, 16 patients) pulmonary artery systolic pressure undergoing right heart catheterization. Patients with pulmonary artery systolic pressure greater than 75 mmHg were excluded from this study. Systemic hemodynamic parameters and ECGs were also evaluated. No clinically important pulmonary hemodynamic, systemic hemodynamic, or ECG changes were observed. This study did not assess the effect of DEFINITY on visualization of cardiac or pulmonary structures.

Regarding interference with medical devices, the RFID tag and VIALMIX RFID unit meets the IEC 60601-1-2 requirements for emission and immunity standards for medical devices.

Advise patients to inform their healthcare provider if they develop any symptoms of hypersensitivity after Definity RT administration, including rash, wheezing, or shortness of breath.

For Intravenous Use Only
Must Activate and Dilute with 1.4 mL of
0.9% Sodium Chloride Injection, USP Prior to Use
Use the 13mm ViaLok® (Vented Vial Access Device) (packaged separately) during dilution and withdrawal of DEFINITY® RT 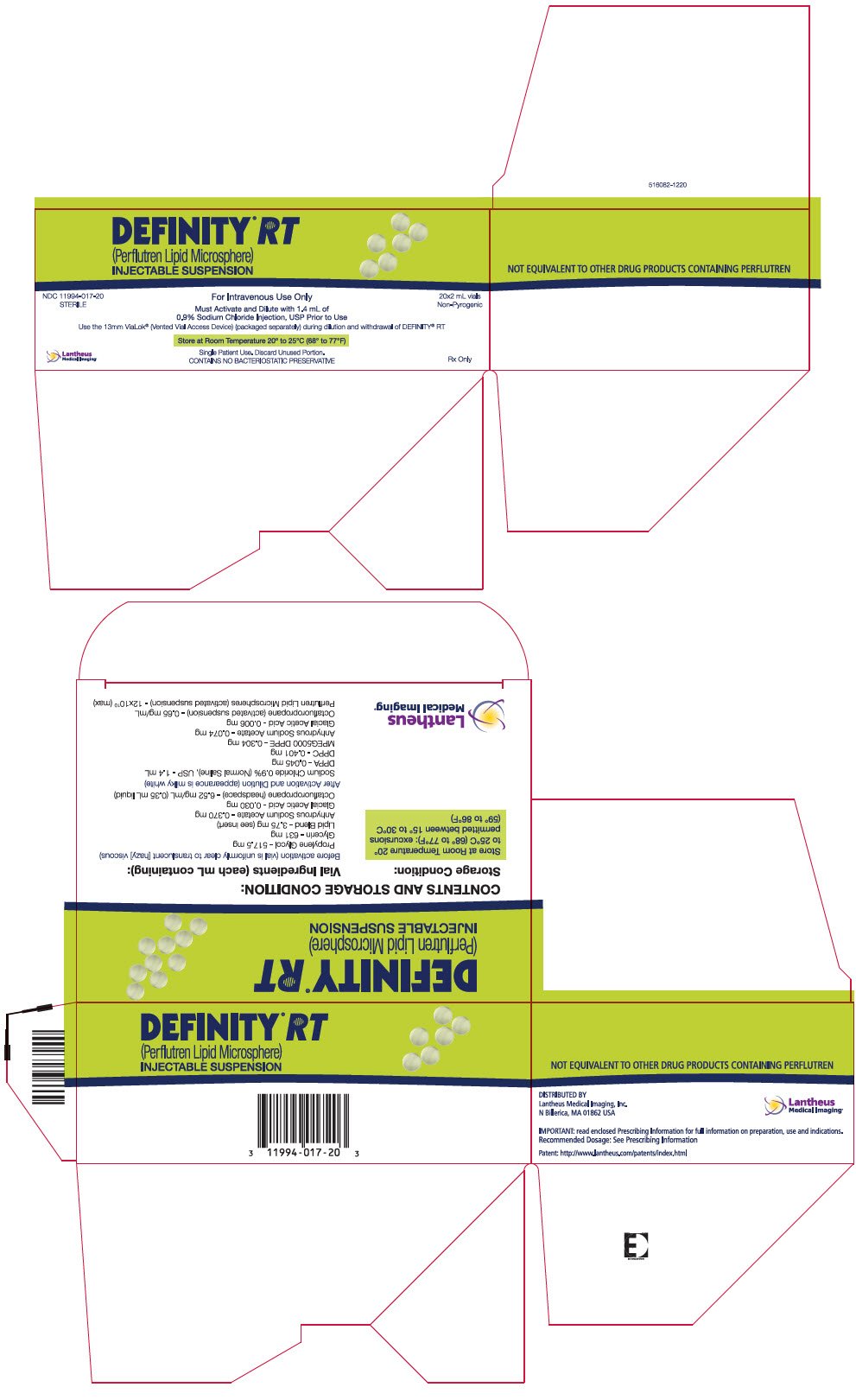