Indications and Usage for Bivalirudin

Bivalirudin for injection has been studied only in patients receiving concomitant aspirin.

The recommended dose of Bivalirudin for injection is an intravenous bolus dose of 0.75 mg/kg, followed immediately by an infusion of 1.75 mg/kg/h for the duration of the procedure. Five minutes after the bolus dose has been administered, an activated clotting time (ACT) should be performed and an additional bolus of 0.3 mg/kg should be given if needed.

Extended duration of infusion following PCI at 1.75 mg/kg/h for up to 4 hours post-procedure should be considered in patients with ST segment elevation MI (STEMI).

No reduction in the bolus dose is needed for any degree of renal impairment.

In patients with creatinine clearance less than 30 mL/min (by Cockcroft Gault equation), reduce the infusion rate to 1 mg/kg/h. Monitor anticoagulant status in patients with renal impairment.

In patients on hemodialysis, reduce the infusion rate to 0.25 mg/kg/h [see Use in Specific Populations (8.6), Clinical Pharmacology (12.3)].

Instructions for Preparation and Administration

Bivalirudin for injection is intended for intravenous bolus injection and continuous infusion after reconstitution and dilution.

No incompatibilities have been observed with administration sets.

Do not administer the drugs listed in Table 2 in the same intravenous line with Bivalirudin for injection.

Parenteral drug products should be inspected visually for particulate matter and discoloration prior to administration. Preparations of Bivalirudin for injection containing particulate matter should not be used. Reconstituted material will be a clear to slightly opalescent, colorless to slightly yellow solution.

Bivalirudin is contraindicated in patients with:

An increased risk of thrombus formation, including fatal outcomes, has been associated with the use of Bivalirudin in gamma brachytherapy.

If a decision is made to use Bivalirudin during brachytherapy procedures, maintain meticulous catheter technique, with frequent aspiration and flushing, paying special attention to minimizing conditions of stasis within the catheter or vessels [see Adverse Reactions (6.1)].

In the BAT trials, 79 of the 2161 (3.7%) patients undergoing PCI for treatment of unstable angina and randomized to Bivalirudin experienced major bleeding events which consisted of: intracranial bleeding, retroperitoneal bleeding, and clinically overt bleeding with a decrease in hemoglobin >3 g/dL or leading to a transfusion of >2 units of blood.

As with all peptides, there is potential for immunogenicity. The detection of antibody formation is highly dependent on the sensitivity and specificity of the assay. Additionally, the observed incidence of antibody (including neutralizing antibody) positivity in an assay may be influenced by several factors including assay methodology, sample handling, timing of sample collection, concomitant medications, and underlying disease. For these reasons, comparison of the incidence of antibodies to Bivalirudin in the studies described below with the incidence of antibodies in other studies or to other products may be misleading.

In in vitro studies, Bivalirudin exhibited no platelet aggregation response against sera from patients with a history of HIT/HITTS.

Among 494 subjects who received Bivalirudin in clinical trials and were tested for antibodies, 2 subjects had treatment-emergent positive Bivalirudin antibody tests. Neither subject demonstrated clinical evidence of allergic or anaphylactic reactions and repeat testing was not performed. Nine additional patients who had initial positive tests were negative on repeat testing.

Because postmarketing adverse reactions are reported voluntarily from a population of uncertain size, it is not always possible to reliably estimate their frequency or establish a causal relationship to drug exposure.

The following adverse reactions have been identified during post approval use of Bivalirudin: fatal bleeding; hypersensitivity and allergic reactions including reports of anaphylaxis; lack of anticoagulant effect; thrombus formation during PCI with and without intracoronary brachytherapy, including reports of fatal outcomes; pulmonary hemorrhage; cardiac tamponade; and INR increased.

There are no data available on use of Bivalirudin in pregnant women to inform a drug-associated risk of adverse developmental outcomes. Reproduction studies in rats and rabbits administered subcutaneously doses up to 1.6 times and 3.2 times the maximum recommended human dose (MRHD) of 15 mg/kg/day based on body surface area (BSA) during organogenesis, respectively, revealed no evidence of fetal harm.

At 500 mg/kg/day (equivalent to 5.4 times the maximum recommended human dose based on body surface area) subcutaneously, litter sizes and live fetuses in rats were reduced. Fetal skeletal variations were also noted. Some of these changes could be attributed to maternal toxicity observed at high doses.

There is no study covering the peri-natal period because of the potential complications of drug-induced hemorrhage during delivery.

It is not known whether Bivalirudin is present in human milk. No data are available on the effects on the breastfed child or on milk production.

Bivalirudin was administered to lactating rats in reproduction studies (see Data). The developmental and health benefits of breastfeeding should be considered along with the mother's clinical need for Bivalirudin and any potential adverse effects on the breastfed child from Bivalirudin or from the underlying maternal condition.

Reproduction studies conducted in lactating female rats dosed subcutaneously daily with Bivalirudin at doses up to 150 mg/kg/day (1.6 times the maximum recommended human dose, based on body surface area) from day 2 through day 20 of lactation revealed no adverse developmental outcomes to the pups.

The safety and effectiveness of Bivalirudin in pediatric patients have not been established.

In studies of patients undergoing PCI, 44% were ≥65 years of age and 12% of patients were ≥75 years old. Elderly patients experienced more bleeding events than younger patients.

Cases of overdose of up to 10 times the recommended bolus or continuous infusion dose of Bivalirudin have been reported in clinical trials and in postmarketing reports. A number of the reported overdoses were due to failure to adjust the infusion dose of Bivalirudin in persons with renal dysfunction including persons on hemodialysis [see Dosage and Administration (2.2)]. Bleeding, as well as deaths due to hemorrhage, have been observed in some reports of overdose. In cases of suspected overdosage, discontinue Bivalirudin immediately and monitor the patient closely for signs of bleeding. There is no known antidote to Bivalirudin. Bivalirudin is hemodialyzable [see Clinical Pharmacology (12.3)]. 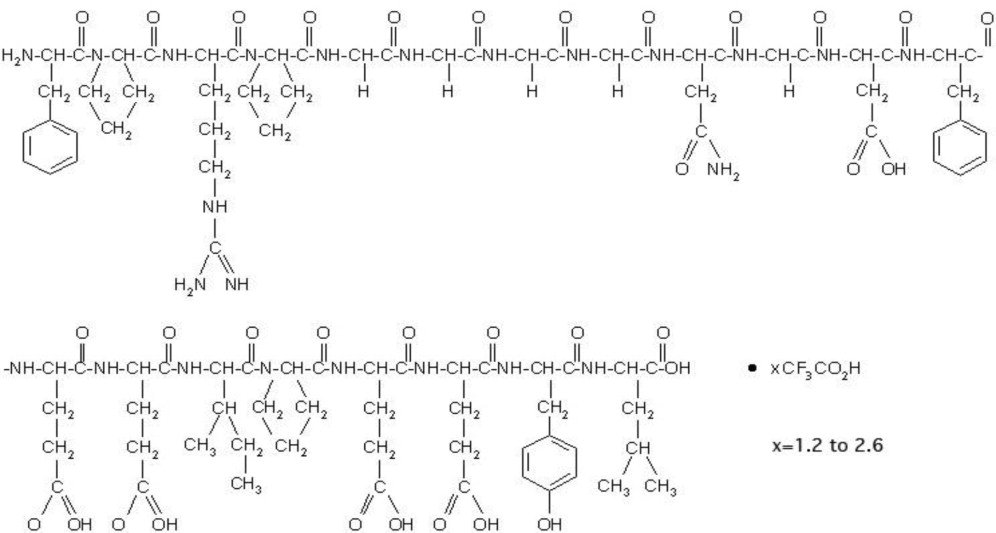 Bivalirudin for Injection is supplied as a sterile white lyophilized cake, in single-dose vials. Each vial contains 250 mg Bivalirudin, equivalent to an average of 275 mg of Bivalirudin trifluoroacetate*, 125 mg mannitol, and sodium hydroxide to adjust the pH to 5-6 (equivalent of approximately 12.5 mg sodium). When reconstituted with Sterile Water for Injection, the product yields a clear to opalescent, colorless to slightly yellow solution, pH 5-6.

Bivalirudin directly inhibits thrombin by specifically binding both to the catalytic site and to the anion-binding exosite of circulating and clot-bound thrombin. Thrombin is a serine proteinase that plays a central role in the thrombotic process, acting to cleave fibrinogen into fibrin monomers and to activate Factor XIII to Factor XIIIa, allowing fibrin to develop a covalently cross-linked framework which stabilizes the thrombus; thrombin also activates Factors V and VIII, promoting further thrombin generation, and activates platelets, stimulating aggregation and granule release. The binding of Bivalirudin to thrombin is reversible as thrombin slowly cleaves the Bivalirudin-Arg3-Pro4 bond, resulting in recovery of thrombin active site functions.

In in vitro studies, Bivalirudin inhibited both soluble (free) and clot-bound thrombin, was not neutralized by products of the platelet release reaction, and prolonged the activated partial thromboplastin time (aPTT), thrombin time (TT), and prothrombin time (PT) of normal human plasma in a concentration-dependent manner. The clinical relevance of these findings is unknown.

In 291 patients with ≥70% vessel occlusion undergoing routine PTCA, a positive correlation was observed between the dose of Bivalirudin and the proportion of patients achieving ACT values of 300 sec or 350 sec. At a Bivalirudin dose of 1 mg/kg IV bolus plus 2.5 mg/kg/h IV infusion for 4 hours, followed by 0.2 mg/kg/h, all patients reached maximal ACT values >300 sec.

Bivalirudin does not bind to plasma proteins (other than thrombin) or to red blood cells.

Bivalirudin is metabolized by proteolytic cleavage.

Bivalirudin undergoes glomerular filtration. Tubular secretion and tubular reabsorption are also implicated in the excretion of Bivalirudin, although the extent is unknown.

No long-term studies in animals have been performed to evaluate the carcinogenic potential of Bivalirudin. Bivalirudin displayed no genotoxic potential in the in vitro bacterial cell reverse mutation assay (Ames test), the in vitro Chinese hamster ovary cell forward gene mutation test (CHO/HGPRT), the in vitro human lymphocyte chromosomal aberration assay, the in vitro rat hepatocyte unscheduled DNA synthesis (UDS) assay, and the in vivo rat micronucleus assay. Fertility and general reproductive performance in rats were unaffected by subcutaneous doses of Bivalirudin up to 150 mg/kg/day, about 1.6 times the dose on a body surface area basis (mg/m2) of a 50 kg person given the maximum recommended dose of 15 mg/kg/day.

In the BAT studies, patients with unstable angina undergoing PCI were randomized 1:1 to a 1 mg/kg bolus of Bivalirudin and then 2.5 mg/kg/h for four hours and then 0.2 mg/kg/h for 14-20 hours or to 175 IU/kg bolus of heparin followed by an 18-24 hour infusion of 15 IU/kg/h infusion. Additional heparin but not Bivalirudin could be administered for ACT <350 seconds. The studies were designed to demonstrate the superiority of Bivalirudin to heparin on the occurrence of any of the following during hospitalization up to seven days of death, MI, abrupt closure of dilated vessel, or clinical deterioration requiring revascularization or placement of an aortic balloon pump.

The studies did not demonstrate that Bivalirudin was statistically superior to heparin for reducing the risk of death, MI, abrupt closure of the dilated vessel, or clinical deterioration requiring revascularization or placement of an aortic balloon pump, but the occurrence of these events was similar in both treatment groups. Study outcomes are shown in Table 3.

This was a single-arm open-label study in which 51 patients with heparin-induced thrombocytopenia (HIT) or heparin induced thrombocytopenia and thrombosis syndrome (HITTS) underwent PCI. The majority of patients achieved adequate ACT at the time of device activation and no major bleeding was reported. Evidence for the diagnosis of HIT/HITTS was based on a clinical history of a decrease of platelets in patients after heparin administration [new diagnosis or history of clinically suspected or objectively documented HIT/HITTS defined as either: 1) HIT: positive heparin-induced platelet aggregation (HIPA) or other functional assay where the platelet count has decreased to <100,000/mL (minimum 30% from prior to heparin), or has decreased to <150,000/mL (minimum 40% from prior to heparin), or has decreased as above within hours of receiving heparin in a patient with a recent, previous exposure to heparin; 2) HITTS: thrombocytopenia as above plus arterial or venous thrombosis diagnosed by physician examination/laboratory and/or appropriate imaging studies]. Patients ranged in age from 48 to 89 years (median 70); weight ranged from 42-123 kg (median 76); 50% were male and 50% were female. Bivalirudin was administered as either 1 mg/kg bolus followed by 2.5 mg/kg/h (high dose in 28 patients) or 0.75 mg/kg bolus followed by a 1.75 mg/kg/h infusion (lower dose in 25 patients) for up to 4 hours. Ninety-eight percent of patients received aspirin, 86% received clopidogrel and 19% received GPIs.

The median ACT values at the time of device activation were 379 sec (high dose) and 317 sec (lower dose). Following the procedure, 48 of the 51 patients (94%) had TIMI grade 3 flow and stenosis <50%. One patient died during a bradycardic episode 46 hours after successful PCI, another patient required surgical revascularization, and one patient experienced no flow requiring a temporary intra-aortic balloon.

Two of the fifty-one patients with the diagnosis of HIT/HITTS developed thrombocytopenia after receiving Bivalirudin and GPIs.

Bivalirudin for Injection is supplied as follows:

Sterile, Nonpyrogenic, Preservative-free.
The container closure is not made with natural rubber latex.

Advise patients to watch carefully for any signs of bleeding or bruising and to report these to their health care provider when they occur. 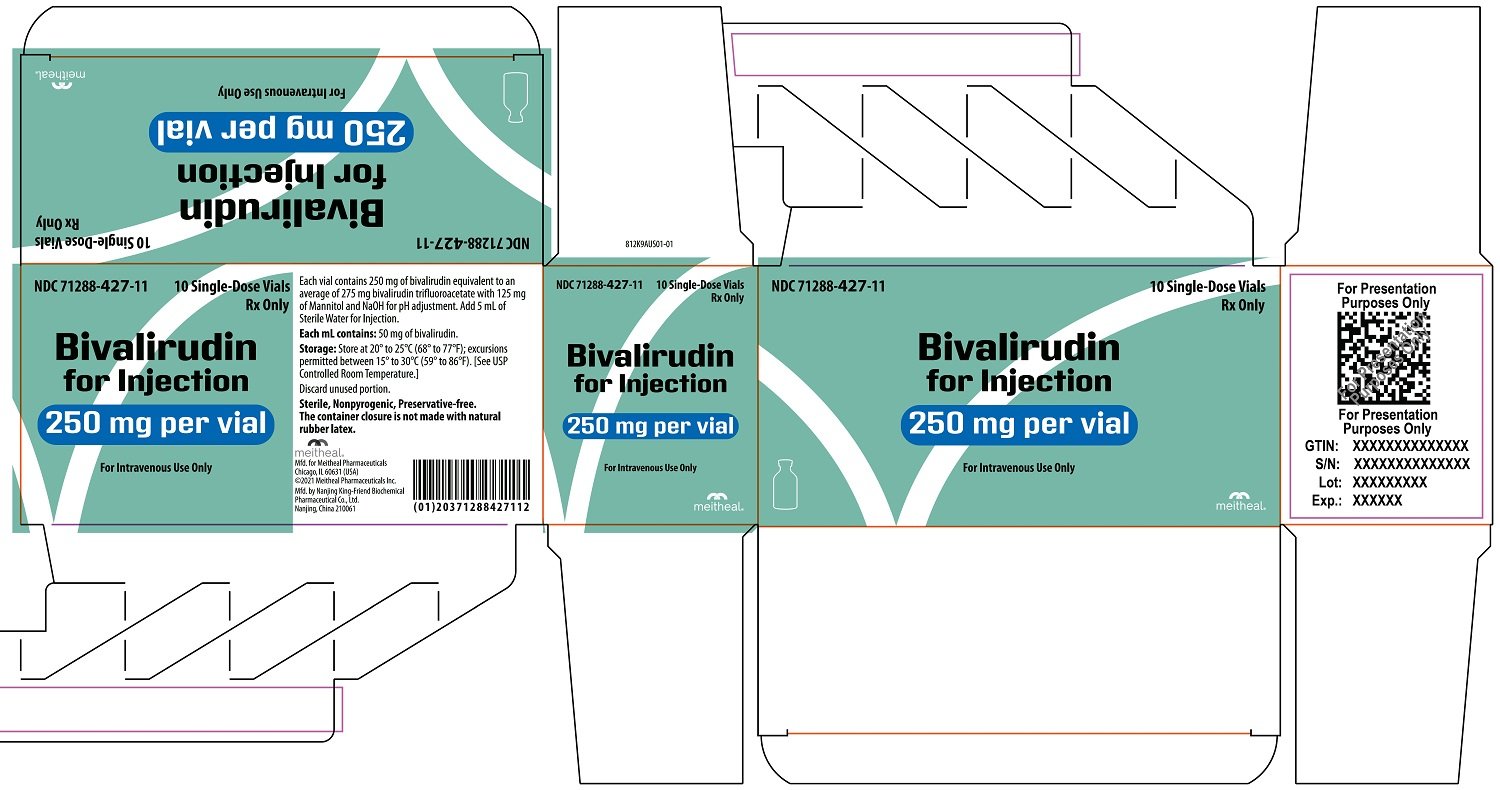