Indications and Usage for AdreView

AdreView is a radiopharmaceutical indicated for use in the detection of primary or metastatic pheochromocytoma or neuroblastoma as an adjunct to other diagnostic tests.

AdreView emits radiation and must be handled with appropriate safety measures to minimize radiation exposure to clinical personnel and patients. Radiopharmaceuticals should be used by or under the control of physicians who are qualified by specific training and experience in the safe use and handling of radionuclides, and whose experience and training have been approved by the appropriate government agency authorized to license the use of radionuclides. AdreView dosing is based upon the radioactivity determined using a suitable calibration system immediately prior to administration.

Before administration of AdreView, administer Potassium Iodide Oral Solution or Lugol's Solution (equivalent to 100 mg iodide for adults, body-weight adjusted for children) or potassium perchlorate (400 mg for adults, body-weight adjusted for children) to block uptake of iodine 123 by the patient's thyroid. Administer the blocking agent at least one hour before the dose of AdreView [see Warnings and Precautions (5.4)].

Inspect the AdreView vial for particulate matter and discoloration prior to administration. Use aseptic procedures and a radiation shielding syringe during administration. Administer the dose as an intravenous injection over 1 to 2 minutes. A subsequent injection of 0.9% sodium chloride may be used to ensure full delivery of the dose.

For pediatric patients < 16 years of age weighing < 70 kg, the recommended dose should be calculated according to patient body weight as shown in Table 1 [see Clinical Studies (14.1)]. The benzyl alcohol in AdreView may cause serious adverse reactions in premature or low birth-weight infants [see Warnings and Precautions (5.2)].

The estimated absorbed radiation doses to adults and children from intravenous administration of AdreView are as shown in Table 2:

The effective dose resulting from an administered activity amount of 10 mCi is 5.07 mSv in an adult.

AdreView is contraindicated in patients with known hypersensitivity to iobenguane or iobenguane sulfate.

Observe infants for signs or symptoms of benzyl alcohol toxicity following AdreView administration. AdreView safety and effectiveness have not been established in neonates (pediatric patients below the age of 1 month).

AdreView is cleared by glomerular filtration and is not dialyzable. The radiation dose to patients with severe renal impairment may be increased due to the delayed elimination of the drug. Delayed AdreView clearance may also reduce the target to background ratios and decrease the quality of scintigraphic images. These risks importantly may limit the role of AdreView in the diagnostic evaluation of patients with severe renal impairment. AdreView safety and efficacy have not been established in these patients [see Clinical Pharmacology (12.2)].

Drugs which interfere with norepinephrine uptake or retention may decrease the uptake of AdreView in neuroendocrine tumors and lead to false negative imaging results. When medically feasible, stop these drugs before AdreView administration and monitor patients for the occurrence of clinically significant withdrawal symptoms, especially patients with elevated levels of circulating catecholamines and their metabolites [see Drug Interactions (7)].

Assess the patient's pulse and blood pressure before and intermittently for 30 minutes after AdreView administration. AdreView may increase release of norepinephrine from chromaffin granules and produce a transient episode of hypertension, although this was not observed in the clinical study. Prior to AdreView administration, ensure emergency cardiac and anti-hypertensive treatments are readily available.

Serious adverse reactions were not observed in the AdreView clinical study. The data described below reflect AdreView exposure to 251 patients with known or suspected pheochromocytoma or neuroblastoma. The average ages were 49 years (range 17 - 88 years) for adults and, for pediatric patients, 4 years (range 1 month - 16 years). Slightly less than half the patients were male. All patients were monitored for adverse reactions over a 24 hour period following AdreView administration.

Adverse reactions were all mild to moderate in severity and were predominantly isolated occurrences (≤ 2 patients) of one of the following reactions: dizziness, rash, pruritus, flushing or injection site hemorrhage.

Because postmarketing reactions are reported voluntarily from a population of uncertain size, it is not always possible to reliably estimate their frequency or establish a causal relationship to drug exposure.

Hypersensitivity reactions have uncommonly been reported during the postmarketing use of AdreView [see Warnings and Precautions (5.1)].

The following drugs have the potential to decrease the uptake of norepinephrine and cause false negative imaging results: antihypertensives that deplete norepinephrine stores or inhibit reuptake (e.g., reserpine, labetalol), antidepressants that inhibit norepinephrine transporter function (e.g., amitriptyline and derivatives, imipramine and derivatives, selective serotonin reuptake inhibitors), sympathomimetic amines (e.g., phenylephrine, phenylpropanolamine, pseudoephedrine and ephedrine), and cocaine. Clinical studies have not determined which specific drugs may cause false negative imaging results nor whether all drugs in any specific pharmacologic class have the same potential to produce the negative imaging results. Increasing the dose of AdreView will not overcome any potential uptake limiting effect of these drugs. Before AdreView administration, discontinue (for at least 5 biological half-lives) drugs known or expected to reduce norepinephrine uptake, as clinically tolerated.

The AdreView clinical study did not include sufficient numbers of subjects aged 65 and over to determine whether they respond differently from younger subjects. Other reported clinical experience has not identified differences in responses between the elderly and younger patients. In general, dose selection for an elderly population should be cautious, usually starting at the low end of the dosing range, reflecting the greater frequency of decreased hepatic, renal or cardiac function, and of concomitant disease or other drug therapy.

AdreView is excreted by the kidneys, and the risks of adverse reactions, increased radiation dose, and occurrence of falsely negative imaging results may be greater in patients with severely impaired renal function. Because elderly patients are more likely to have decreased renal function, care should be taken in dose selection and image interpretation. Consider assessment of renal function in elderly patients prior to AdreView administration.

The major manifestations of overdose relate predominantly to increased radiation exposure, with the long term risks for neoplasia. 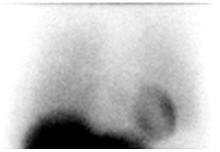 Iodine 123 is a cyclotron-produced radionuclide that decays to Te 123 by electron capture and has a physical half-life of 13.2 hours.

The specific gamma ray constant for iodine 123 is 1.6 R/mCi-hr at 1 cm. The first half value thickness of lead (Pb) for I 123 is 0.04 cm. The relative transmission of radiation emitted by the radionuclide that results from interposition of various thicknesses of Pb is shown in Table 4 (e.g., the use of 2.16 cm Pb will decrease the external radiation exposure by a factor of about 1,000).

Iobenguane is similar in structure to the antihypertensive drug guanethedine and to the neurotransmitter norepinephrine (NE). Iobenguane is, therefore, largely subject to the same uptake and accumulation pathways as NE. Iobenguane is taken up by the NE transporter in adrenergic nerve terminals and stored in the presynaptic storage vesicles. Iobenguane accumulates in adrenergically innervated tissues such as the adrenal medulla, salivary glands, heart, liver, spleen and lungs as well as tumors derived from the neural crest. By labeling iobenguane with the isotope iodine 123, it is possible to obtain scintigraphic images of the organs and tissues in which the radiopharmaceutical accumulates.

AdreView is a diagnostic radiopharmaceutical which contains a small quantity of iobenguane that is not expected to produce a pharmacodynamic effect [see Description (11)]. To minimize radiation dose to the thyroid gland, this organ should be blocked before dosing [see Dosage and Administration (2.1)]. Since iobenguane is excreted mainly via the kidneys, patients with severe renal insufficiency may experience increased radiation exposure and impaired imaging results. Frequent voiding should be encouraged after administration to minimize the radiation dose to the bladder [see Warnings and Precautions (5.3)]. The calculation of the estimated radiation dose is shown in Table 2 [see Dosage and Administration (2.5)].

The majority of the iobenguane dose is excreted unaltered by the kidneys via glomerular filtration. A rapid initial clearance of circulating iobenguane is observed, followed by a slow clearance as iobenguane is released from other compartments. In patients with normal renal function, 70 to 90% of the administered dose is recovered unaltered in urine within 4 days. Iobenguane is not cleared by dialysis [see Warnings and Precautions (5.3)]. Most of the remaining radioactivity recovered in the urine is in the form of the radioiodinated metabolite m-iodohippuric acid (MIHA) (typically ≤ 10%) and free radioiodide (typically ≤ 6%). The enzymatic process responsible for metabolism has not been well characterized and the pharmacologic activity of these metabolites has not been studied. Only a small amount (< 1%) of the injected dose is eliminated via the feces.

Iobenguane hemisulfate was not mutagenic in vitro in the Ames bacterial mutation assay and in the in vitro mouse lymphoma test, and was negative in the in vivo micronucleus test in rats.

Long-term animal studies have not been conducted to evaluate AdreView's carcinogenic potential or potential effects on fertility.

Iobenguane sulfate testing in dogs revealed electrocardiographic (ECG) changes after administration of 202 times the mg/m2 conversion of the maximum human dose for a 60 kg adult; the no observable effect level (NOEL) was not determined. When iobenguane was tested in a cell system stably expressing hERG-1 potassium channels, inhibition of potassium channels was not observed at an 80 µM iobenguane concentration and the IC50 was 487 µM.

The safety and efficacy of AdreView were assessed in an open-label, multicenter, multinational trial of 251 subjects with known or suspected neuroblastoma or pheochromocytoma. Diagnostic efficacy for the detection of metabolically active neuroblastoma or pheochromocytoma was determined by comparison of focal increased radionuclide uptake on planar scintigraphy at 24 ± 6 hours post-administration of AdreView against the definitive diagnosis (standard of truth). Anterior and posterior planar whole-body images, or alternatively whole-body overlapping spot images, were acquired from the head to below the knees. Additional spot images were performed as deemed appropriate at the discretion of the clinical image reviewer. SPECT imaging of the thorax and abdomen was then obtained when possible.

Of the 251 subjects dosed with AdreView, 100 had known or suspected neuroblastoma and 151 had known or suspected pheochromocytoma. The population included 154 adults and 97 pediatric patients; the majority of adults were female (59%), the majority of pediatric subjects were male (58%). The adult subjects had a mean age of 49 years (range 17 to 88 years). The pediatric patients (56 males and 41 females) consisted of 32 infants (1 month up to 2 years of age), 62 children (2 years up to 12 years) and three adolescents (12 years up to 16 years).

The definitive diagnosis (standard of truth) for the presence or absence of metabolically active pheochromocytoma or neuroblastoma was determined by histopathology or, when histopathology was unavailable, a composite of imaging (i.e., CT, MRI, [131I]-mIBG scintigraphy), plasma/urine catecholamine and/or catecholamine metabolite measurements, and clinical follow-up.

A standard of truth was available for 211 subjects (127 with pheochromocytoma, 84 with neuroblastoma) and this group comprised the diagnostic efficacy population. For 93 of these subjects, the standard of truth was based solely upon histopathology. Of 211 subjects in the efficacy population, all had planar scintigraphy and 167 subjects had SPECT in addition to planar imaging. All images were assessed independently by three readers blinded to all clinical data. Table 5 summarizes the AdreView performance characteristics, by reader.

AdreView is supplied in 10 mL glass vials containing a total volume of 5 mL of solution with a total radioactivity of 370 MBq (10 mCi) at calibration time. Each vial is enclosed in a lead container of appropriate thickness.

In accordance with USP recommendations Iobenguane I 123 Injection preparations should not be used after the expiration date and time stated on the label.

This preparation is approved for use by persons licensed by the Illinois Emergency Management Agency pursuant to 32 Ill. Adm. Code Section 330.260(a) and 355.4010 or equivalent licenses of the Nuclear Regulatory Commission or an Agreement State.

Instruct patients to inform their physician or healthcare provider if they:

Instruct patients to increase their level of hydration prior to receiving AdreView and to void frequently for the first 48 hours following AdreView administration.

AdreView is a trademark of GE Healthcare.

GE and the GE Monogram are trademarks of
General Electric Company.

More about AdreView (iobenguane I 123)