Treatment of serious Candida infections, including urinary tract or pulmonary infections, candidemia, endocarditis, meningitis, and endophthalmitis. Usually used in conjunction with IV amphotericin B. Should not be used alone for systemic candidiasis or severe, life-threatening infections since it may be ineffective or result in emergence of flucytosine resistance.

For treatment of CNS candidiasis in adults, IDSA recommends initial treatment with IV amphotericin B (with or without oral flucytosine) followed by step-down treatment with fluconazole.

For treatment of endocarditis (native or prosthetic valve) or implantable cardiac device infections caused by Candida, IDSA recommends initial treatment with a lipid formulation of IV amphotericin B (with or without oral flucytosine) or an IV echinocandin (anidulafungin, caspofungin, micafungin) followed by step-down treatment with fluconazole.

For treatment of endophthalmitis caused by fluconazole- and voriconazole-resistant Candida in adults, IDSA states IV amphotericin B liposomal (with or without oral flucytosine) is regimen of choice. Decisions regarding antifungal treatment and surgical intervention should be made jointly by an ophthalmologist and infectious disease clinician.

Treatment of serious cryptococcal infections, including pulmonary infections, septicemia, and meningitis, caused by Cryptococcus neoformans. Should not be used alone for treatment of cryptococcosis.

Usually used in conjunction with IV amphotericin B for initial treatment of cryptococcal infections, especially cryptococcal meningitis in HIV-infected patients. Addition of flucytosine to the amphotericin B regimen for initial treatment may reduce the time required for sterilization of CSF in those with CNS involvement. Has also been used in conjunction with fluconazole for treatment of cryptococcal meningitis in HIV-infected individuals.

For treatment of cryptococcal meningitis in HIV-infected adults, adolescents, and children, CDC, NIH, IDSA, and others state that the preferred regimen is initial (induction) therapy with IV amphotericin B (liposomal or conventional formulation) given in conjunction with oral flucytosine for at least 2 weeks until there is evidence of clinical improvement and negative CSF cultures after repeat lumbar puncture, then follow-up (consolidation) therapy with oral or IV fluconazole given for at least 8 weeks, followed by long-term suppressive or maintenance therapy (secondary prophylaxis) with oral fluconazole to complete ≥1 year of azole therapy.

One alternative regimen for initial (induction) treatment of cryptococcal meningitis in HIV-infected adults, adolescents, and children who cannot receive the preferred regimen is oral or IV fluconazole used in conjunction with oral flucytosine. Alternative regimens may be less effective and are recommended only in patients who cannot tolerate or have not responded to the preferred regimen.

Although data are limited, CDC, NIH, and IDSA state that recommendations for treatment of CNS, pulmonary, or disseminated infections caused by C. gattii and recommendations for long-term suppressive or maintenance therapy (secondary prophylaxis) of C. gattii infections are the same as recommendations for C. neoformans infections. IDSA states that single, small cryptococcoma may be treated with oral fluconazole, but induction therapy with a regimen of conventional IV amphotericin B and oral flucytosine given for 4–6 weeks, followed by consolidation therapy with fluconazole given for 6–18 months should be considered for very large or multiple cryptococcomas caused by C. gattii. Regimens that include IV amphotericin B (conventional or liposomal formulation), flucytosine, and fluconazole have been effective in a few patients with CNS infections known to be caused by C. gattii.

Optimum regimens for chromoblastomycosis not identified. Azole antifungals (usually itraconazole) or terbinafine have been effective and may be the preferred antifungals for treatment of chromoblastomycosis; surgery and/or adjunctive use of other therapies (e.g., heat therapy, laser therapy, photodynamic therapy) may be indicated.

Voriconazole is considered drug of choice for initial treatment of invasive aspergillosis in most patients; IV amphotericin B (a lipid formulation) is preferred alternative.

Has been used in conjunction with other anti-infectives in a few patients for treatment of free-living ameba infections†, including granulomatous amebic encephalitis or other infections caused by Acanthamoeba† or Balamuthia mandrillaris†.

CNS infections caused by free-living ameba have high mortality rate, and only very limited number of cases have been successfully treated. Early diagnosis and treatment with a multiple-drug regimen may increase chance of survival.

Although data are limited, most reported cases of Acanthamoeba and B. mandrillaris infection have been treated empirically with regimens that include a variety of anti-infectives (e.g., albendazole, amphotericin B, azole antifungals [fluconazole, itraconazole, ketoconazole], flucytosine, macrolides [azithromycin or clarithromycin], miltefosine, rifampin, pentamidine, sulfonamides [co-trimoxazole or sulfadiazine]).

Administer orally. Nausea or vomiting may be reduced or avoided if each dose is administered by ingesting a few capsules at a time over a 15-minute period.

For patients unable to swallow capsules, oral suspensions containing 10 or 50 mg/mL have been prepared extemporaneously using the commercially available capsules.

Has been administered IV, but a parenteral preparation not commercially available in US.

Has been administered topically as a cream, but topical preparations not commercially available in US.

Some clinicians suggest measuring serum flucytosine concentrations beginning 3–5 days after initiation of the drug (or beginning after 3–5 doses) and then once or twice weekly during treatment and whenever there is evidence of toxicity or a change in renal function. Peak serum concentrations usually measured using blood samples taken 2 hours after an oral dose.

100 mg/kg daily given in 4 divided doses every 6 hours recommended by AAP.

Neonates†: If salvage therapy indicated because of nonresponse to initial treatment with IV amphotericin B alone, IDSA states consider adding flucytosine 25 mg/kg 4 times daily to the amphotericin B regimen. After several weeks and when response attained, transition to fluconazole step-down therapy. Continue antifungal treatment until all signs, symptoms, CSF abnormalities, and radiologic abnormalities (if present) have resolved.

HIV-infected infants, children, and adolescents with cryptococcal meningitis†: Induction therapy with 25 mg/kg 4 times daily in conjunction with IV amphotericin B for at least 2 weeks until there is evidence of clinical improvement and negative CSF cultures after repeat lumbar puncture, then consolidation therapy with oral or IV fluconazole alone.

HIV-infected infants and children with cryptococcal meningitis who cannot receive amphotericin B†: Induction therapy with 25 mg/kg 4 times daily in conjunction with oral or IV fluconazole.

HIV-infected infants and children with severe pulmonary or disseminated (non-CNS) cryptococcosis†: 25 mg/kg 4 times daily in conjunction with IV amphotericin B. Treatment duration depends on response and site and severity of infection.

Manufacturer recommends 50–150 mg/kg daily given in 4 divided doses at 6-hour intervals. In patients with elevated BUN or Scr, use lower dosage initially.

To reduce risk of toxicity when used in conjunction with IV amphotericin B, some clinicians suggest a low initial dosage (i.e., 75 mg/kg daily given in 4 divided doses). Dosage can then be adjusted based on serum flucytosine concentrations and presence or absence of amphotericin B-associated renal toxicity.

25 mg/kg 4 times daily in conjunction with IV amphotericin B. If infection caused by fluconazole-susceptible Candida, consider transitioning to oral fluconazole after patient stabilized and Candida cleared from bloodstream.

Endophthalmitis caused by fluconazole- and voriconazole-resistant Candida: 25 mg/kg 4 times daily in conjunction with IV amphotericin B liposomal. Duration of treatment is at least 4–6 weeks as determined by repeated examinations to verify resolution.

HIV-infected adults with cryptococcal meningitis: Induction therapy with 25 mg/kg 4 times daily in conjunction with IV amphotericin B given for at least 2 weeks until there is evidence of clinical improvement and negative CSF cultures after repeat lumbar puncture, then consolidation therapy with oral or IV fluconazole alone.

HIV-infected adults with cryptococcal meningitis who cannot receive amphotericin B: Induction therapy with 25 mg/kg 4 times daily in conjunction with oral or IV fluconazole.

Granulomatous amebic encephalitis or other infections caused by Acanthamoeba† or Balamuthia mandrillaris†: Some clinicians recommend 37.5 mg/kg every 6 hours (up to 150 mg/kg daily); higher dosage has been used in some patients. Use in conjunction with other anti-infectives. (See Free-living Ameba Infections under Uses.)

Use with extreme caution and reduce dosage.

Several methods proposed for calculating flucytosine dosage for patients with impaired renal function. For greater accuracy, base dosage on actual serum flucytosine concentrations. Precise dosing is limited since flucytosine is commercially available only as 250- and 500-mg capsules.

Alternatively, other clinicians recommend that doses of 12–35 mg/kg be given at intervals equal to twice the half-life of the drug.

In patients undergoing hemodialysis, some clinicians recommend that doses of 20–50 mg/kg be given every 48–72 hours and that doses be administered after dialysis.

Fatal bone marrow aplasia reported in some patients. Bone marrow toxicity can be irreversible and may be fatal in immunosuppressed patients.

Risk of bone marrow toxicity is increased in patients who have hematologic disease and in those who are receiving or previously received radiation or drug therapy that depresses the bone marrow. Risk of adverse hematologic effects also may be increased in patients who have prolonged, high serum flucytosine concentrations (i.e., >100 mcg/mL), particularly in those with renal dysfunction or during concomitant therapy with amphotericin B.

Use with extreme caution in patients with bone marrow depression.

Hematologic, renal, and hepatic status must be monitored closely during flucytosine therapy.

No adequate or controlled studies to date using flucytosine in pregnant women.

Use during pregnancy only when potential benefits justify possible risks to the fetus.

Not know whether distributed into human milk.

Discontinue nursing or the drug, taking into account the importance of the drug to the mother.

Safety and efficacy not systematically studied in children.

Has been used in some neonates† (with or without concomitant amphotericin B) without unusual adverse effects. Hypokalemia, acidemia, anemia, and thrombocytopenia have been reported.

Dosage adjustment may be required in geriatric patients based on renal function. (See Renal Impairment under Dosage and Administration.)

Pharmacokinetics not affected by hepatic impairment.

Use with extreme caution in patients with impaired renal function.

Eliminated mainly by the kidneys; renal impairment may lead to drug accumulation and increased risk of toxicity.

Rapidly and almost completely absorbed from GI tract; bioavailability is 78–90%.

Food decreases rate, but not extent, of absorption.

In anephric patients, peak serum concentrations may be 50% higher than in patients with normal renal function.

Not known whether distributed into milk.

Only minimal amounts are metabolized. Deaminated (probably by gut bacteria) to fluorouracil. AUC ratio of fluorouracil to flucytosine is 4%.

>90% of an oral dose excreted unchanged in urine.

In a limited number of neonates and infants†, median half-life was 7.4 hours. 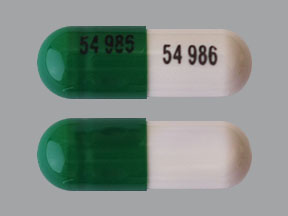