Myasthenia gravis (my-us-THEE-nee-uh GRAY-vis) is characterized by weakness and rapid fatigue of any of the muscles under your voluntary control. It's caused by a breakdown in the normal communication between nerves and muscles.

There's no cure for myasthenia gravis, but treatment can help relieve signs and symptoms, such as weakness of arm or leg muscles, double vision, drooping eyelids, and difficulties with speech, chewing, swallowing and breathing.

Though this disease can affect people of any age, it's more common in women younger than 40 and in men older than 60.

Muscle weakness caused by myasthenia gravis worsens as the affected muscle is used. Because symptoms usually improve with rest, muscle weakness can come and go. However, the symptoms tend to progress over time, usually reaching their worst within a few years after the onset of the disease.

Although myasthenia gravis can affect any of the muscles that you control voluntarily, certain muscle groups are more commonly affected than others.

In more than half of people who develop myasthenia gravis, their first signs and symptoms involve eye problems, such as:

In about 15% of people with myasthenia gravis, the first symptoms involve face and throat muscles, which can:

Myasthenia gravis can also cause weakness in your neck, arms and legs. Weakness in your legs can affect how you walk. Weak neck muscles make it hard to hold up your head.

Talk to your doctor if you have difficulty:

Your nerves communicate with your muscles by releasing chemicals (neurotransmitters) that fit precisely into receptor sites on the muscle cells at the nerve-muscle junction.

In myasthenia gravis, your immune system produces antibodies that block or destroy many of your muscles' receptor sites for a neurotransmitter called acetylcholine (as-uh-teel-KOH-leen). With fewer receptor sites available, your muscles receive fewer nerve signals, resulting in weakness. 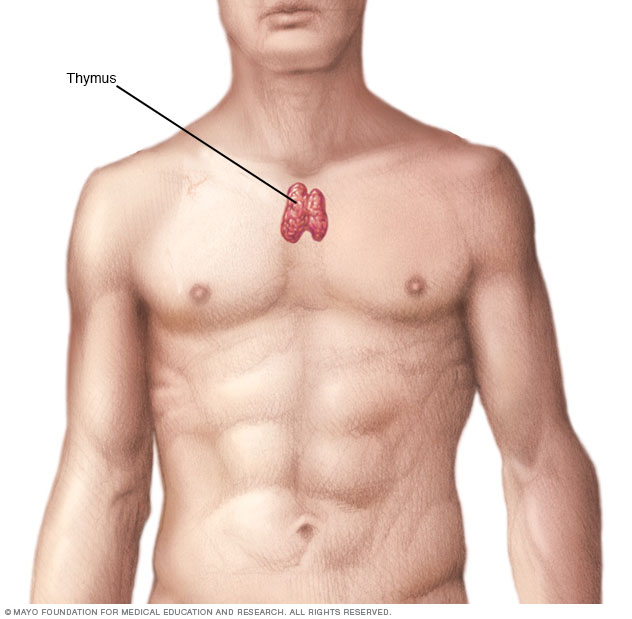 The thymus gland, a part of your immune system situated in the upper chest beneath the breastbone, may trigger or maintain the production of antibodies that result in the muscle weakness.

The thymus gland is a part of your immune system situated in the upper chest beneath your breastbone. Researchers believe that the thymus gland triggers or maintains the production of the antibodies that block acetylcholine. 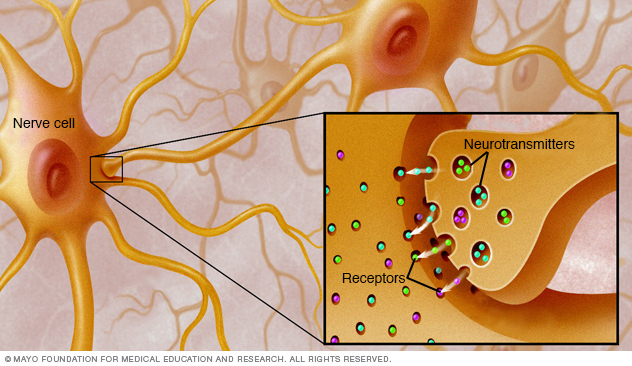 Some children are born with a rare, hereditary form of myasthenia gravis, called congenital myasthenic syndrome.

Factors that can worsen myasthenia gravis

Complications of myasthenia gravis are treatable, but some can be life-threatening.

Myasthenic crisis is a life-threatening condition that occurs when the muscles that control breathing become too weak to work. Emergency treatment and mechanical assistance with breathing are needed. Medications and blood-filtering therapies help people to again breathe on their own.

Some people with myasthenia gravis have a tumor in the thymus gland, a gland under the breastbone that is involved with the immune system. Most of these tumors, called thymomas, aren't cancerous (malignant).

People with myasthenia gravis are more likely to have the following conditions:

Your doctor will review your symptoms and your medical history and conduct a physical examination. Your doctor might use several tests, including:

Your doctor may check your neurological health by testing:

Tests to help confirm a diagnosis of myasthenia gravis might include:

A blood test might reveal the presence of abnormal antibodies that disrupt the receptor sites where nerve impulses signal your muscles to move.

In this nerve conduction study, doctors attach electrodes to your skin over the muscles to be tested. Doctors send small pulses of electricity through the electrodes to measure the nerve's ability to send a signal to your muscle.

To diagnose myasthenia gravis, doctors will test the nerve repeatedly to see if its ability to send signals worsens with fatigue.

This test measures the electrical activity traveling between your brain and your muscle. It involves inserting a fine wire electrode through your skin and into a muscle to test a single muscle fiber.

Your doctor might order a CT scan or an MRI to check if there's a tumor or other abnormality in your thymus.

These tests evaluate whether your condition is affecting your breathing.

Various treatments, alone or in combination, can relieve symptoms of myasthenia gravis. Your treatment will depend on your age, how severe your disease is and how fast it's progressing.

The following therapies are usually used in the short term to treat a sudden worsening of symptoms or before surgery or other therapies.

Some people with myasthenia gravis have a tumor in the thymus gland. If you have a tumor, called a thymoma, doctors will surgically remove your thymus gland (thymectomy).

Even if you don't have a tumor in the thymus gland, removing the gland might improve your myasthenia gravis symptoms. However, the benefits of thymectomy can take years to develop.

A thymectomy can be performed as an open surgery or as a minimally invasive surgery. In open surgery, your surgeon splits the central breastbone (sternum) to open your chest and remove your thymus gland.

To help you make the most of your energy and cope with the symptoms of myasthenia gravis:

Coping with myasthenia gravis can be difficult for you and your loved ones. Stress can worsen your condition, so find ways to relax. Ask for help when you need it.

Learn all you can about your condition, and have your loved ones learn about it as well. You all might benefit from a support group, where you can meet people who understand what you and your family members are going through.

You're likely to first see your family doctor, who will then refer you to a doctor trained in nervous system conditions (neurologist) for further evaluation.

Here's information to help you get ready for your appointment.

Take a friend or family member along to help you absorb the information you're given. Make a list of:

For myasthenia gravis, questions to ask your doctor include:

Be prepared to answer questions your doctor is likely to ask, such as: