An ear infection (sometimes called acute otitis media) is an infection of the middle ear, the air-filled space behind the eardrum that contains the tiny vibrating bones of the ear. Children are more likely than adults to get ear infections.

Because ear infections often clear up on their own, treatment may begin with managing pain and monitoring the problem. Sometimes, antibiotics are used to clear the infection. Some people are prone to having multiple ear infections. This can cause hearing problems and other serious complications. 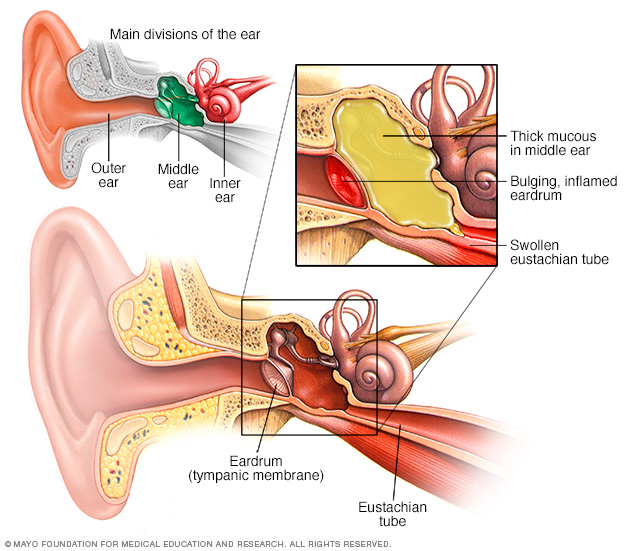 The onset of signs and symptoms of ear infection is usually rapid.

Signs and symptoms common in children include:

Common signs and symptoms in adults include:

Signs and symptoms of an ear infection can indicate several conditions. It's important to get an accurate diagnosis and prompt treatment. Call your child's doctor if:

An ear infection is caused by a bacterium or virus in the middle ear. This infection often results from another illness — cold, flu or allergy — that causes congestion and swelling of the nasal passages, throat and eustachian tubes.

The eustachian tubes are a pair of narrow tubes that run from each middle ear to high in the back of the throat, behind the nasal passages. The throat end of the tubes open and close to:

Swollen eustachian tubes can become blocked, causing fluids to build up in the middle ear. This fluid can become infected and cause the symptoms of an ear infection.

In children, the eustachian tubes are narrower and more horizontal, which makes them more difficult to drain and more likely to get clogged.

Adenoids are two small pads of tissues high in the back of the nose believed to play a role in immune system activity.

Because adenoids are near the opening of the eustachian tubes, swelling of the adenoids may block the tubes. This can lead to middle ear infection. Swelling and irritation of adenoids is more likely to play a role in ear infections in children because children have relatively larger adenoids compared to adults.

Conditions of the middle ear that may be related to an ear infection or result in similar middle ear problems include: 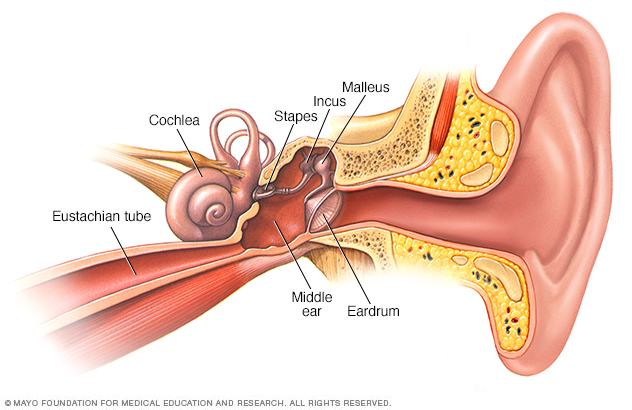 The middle ear includes three small bones — the hammer (malleus), anvil (incus) and stirrup (stapes). The middle ear is separated from your external ear by the eardrum and connected to the back of your nose and throat by a narrow passageway called the eustachian tube. The cochlea, a snail-shaped structure, is part of your inner ear.

Risk factors for ear infections include:

The following tips may reduce the risk of developing ear infections:

Your doctor can usually diagnose an ear infection or another condition based on the symptoms you describe and an exam. The doctor will likely use a lighted instrument (an otoscope) to look at the ears, throat and nasal passage. He or she will also likely listen to your child breathe with a stethoscope.

Your doctor may perform other tests if there is any doubt about a diagnosis, if the condition hasn't responded to previous treatments, or if there are other long-term or serious problems.

What a diagnosis means

Some ear infections resolve without antibiotic treatment. What's best for your child depends on many factors, including your child's age and the severity of symptoms.

Some evidence suggests that treatment with antibiotics might be helpful for certain children with ear infections. On the other hand, using antibiotics too often can cause bacteria to become resistant to the medicine. Talk with your doctor about the potential benefits and risks of using antibiotics.

Your doctor will advise you on treatments to lessen pain from an ear infection. These may include the following:

After an initial observation period, your doctor may recommend antibiotic treatment for an ear infection in the following situations:

Children younger than 6 months of age with confirmed acute otitis media are more likely to be treated with antibiotics without the initial observational waiting time.

Even after symptoms have improved, be sure to use the antibiotic as directed. Failing to take all the medicine can lead to recurring infection and resistance of bacteria to antibiotic medications. Talk with your doctor or pharmacist about what to do if you accidentally miss a dose.

During an outpatient surgical procedure called a myringotomy, a surgeon creates a tiny hole in the eardrum that enables him or her to suction fluids out of the middle ear. A tiny tube (tympanostomy tube) is placed in the opening to help ventilate the middle ear and prevent the buildup of more fluids. Some tubes are intended to stay in place for four to 18 months and then fall out on their own. Other tubes are designed to stay in longer and may need to be surgically removed.

The eardrum usually closes up again after the tube falls out or is removed.

Chronic infection that results in a hole or tear in the eardrum — called chronic suppurative otitis media — is difficult to treat. It's often treated with antibiotics administered as drops. You may receive instructions on how to suction fluids out through the ear canal before administering drops.

Children who have frequent infections or who have persistent fluid in the middle ear will need to be monitored closely. Talk to your doctor about how often you should schedule follow-up appointments. Your doctor may recommend regular hearing and language tests. 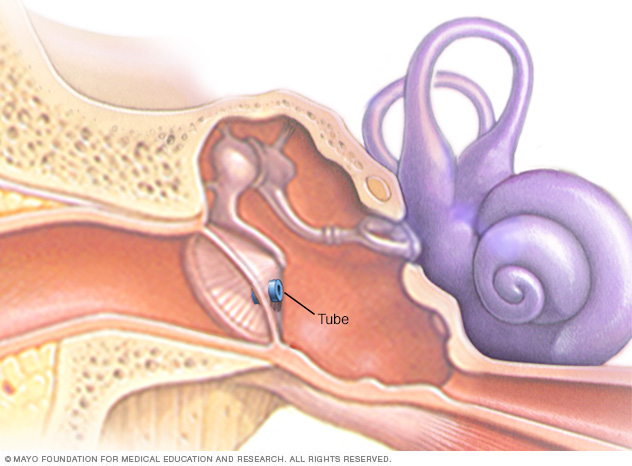 Ear tubes (tympanostomy tubes, ventilation tubes, pressure equalization tubes) are tiny cylinders, usually made of plastic or metal, that are surgically inserted into the eardrum. An ear tube creates an airway that ventilates the middle ear and prevents the accumulation of fluids behind the eardrum.

You'll likely begin by seeing your family doctor or your child's pediatrician. You may be referred to a specialist in ear, nose and throat (ENT) disorders if the problem has persisted for some time, is not responding to treatment or has occurred frequently.

If your child is old enough to respond, before your appointment talk to the child about questions the doctor may ask and be prepared to answer questions on behalf of your child. Questions for adults will address most of the same issues.