What is Chronic Otitis Media, Cholesteatoma and Mastoiditis?

Chronic otitis media describes some long-term problems with the middle ear, such as a hole (perforation) in the eardrum that does not heal or a middle ear infection (otitis media) that doesn't improve or keeps returning. 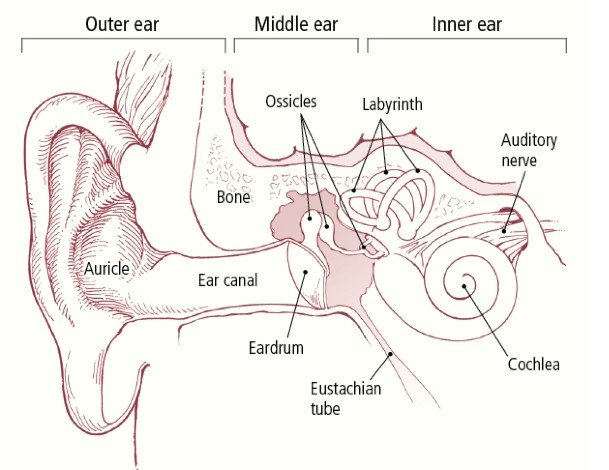 Sometimes a middle ear infection causes a hole (perforation) in the eardrum. A hole that does not heal within six weeks is called chronic otitis media. This problem can take one of three forms:

Children are more likely to get middle ear infections. Because of this, they also are more likely to develop chronic otitis media. Doctors believe that children have an especially high risk of all types of ear infections because of several factors, including: Problems with the middle ear, such as fluid in the middle ear, a hole in the eardrum, or injury to the small, middle ear bones, can cause hearing loss. In rare situations, infections in the middle ear can spread deeper inside the inner ear, causing a sensorineural hearing loss and dizziness. Rare, but serious, complications include brain infections, such as an abscess or meningitis. A chronic infection and a cholesteatoma also can cause injury to the facial nerves and facial paralysis.

A person can have chronic otitis media caused by a persistent hole in the eardrum for years with no symptoms or only mild hearing loss. There may be mild ear pain or discomfort. When the middle ear is infected, fluid will drain from the ear and hearing loss can worsen.

Symptoms that can be a sign of a more serious condition, and that require immediate attention, include:

The doctor will ask about a history of ear infections, treatments used, and any previous ear surgery. The doctor also will want to know about any medications being taken to treat an ear problem, including the type, dose, and length of treatment.

The doctor may suspect chronic otitis media based on a history of prior ear infections and/or persistent ear drainage. To confirm the diagnosis, he or she will look inside the ear with a special light called an otoscope and may take a sample of drainage fluid to be examined in a laboratory.

In some cases, the primary care doctor may refer you or your child to an otolaryngologist, a doctor who specializes in treating disorders of the ears, nose and throat. If the otolaryngologist suspects mastoiditis or a cholesteatoma, additional tests may be needed. These could include X-rays, a computed tomography (CT) scan, or a magnetic resonance imaging (MRI) scan. If there is any concern that hearing may have been affected, it can be evaluated by a test called an audiogram.

How long symptoms last varies. Antibiotic treatment of the infection causing the chronic otitis media may be enough to stop the ear from draining. Sometimes, despite appropriate antibiotics, the infection continues, and surgery may be needed to remove the infected tissue and repair the eardrum perforation and any injury to the tiny bones in the ear. A cholesteatoma usually has to be removed surgically.

One of the best ways to prevent chronic otitis media is to have any ear infection treated promptly. A child with chronic Eustachian tube problems may need special tubes (tympanostomy tubes) inserted into his or her eardrums to prevent repeated ear infections by allowing air to flow normally in the middle ear.

After an infection clears up, a perforated eardrum may need to be repaired to prevent another infection.

The goals of chronic otitis media treatment include:

In many case, topical antibiotics are tried first. Most often doctors choose a fluoroquinolone antibiotic solution, such as ciprofloxacin. For more severe infections, an oral antibiotic will be needed.

Also, the doctor will suction out the middle ear fluid that is draining. Most infections will clear up with this treatment unless a cholesteatoma is present. A cholesteatoma can cause repeated infections and often must be removed with surgery.

A doctor may recommend surgery to repair a persistent hole in the eardrum. However, in some cases, the hole is left open because it can act like a tympanostomy tube to allow air to flow through the middle ear and possibly prevent more infections.

When a chronic ear infection spreads beyond the middle ear to the mastoid bone (the portion of bone behind the middle ear), a serious infection called mastoiditis can occur. Antibiotics given intravenously (into a vein) often can clear up this infection, but surgery may be necessary.

Call your doctor immediately if you or your child develops a cloudy or foul-smelling discharge from one or both ears or has difficulty hearing. Also, seek emergency care for fever, swelling, tenderness or redness behind the ear, persistent or severe ear pain, dizziness, headache, confusion, or facial weakness.

With prompt antibiotic treatment and ear aspiration, the outlook is excellent. About 9 out of 10 patients are free of infection after this therapy. Surgery usually is necessary to correct a persistent eardrum perforation or to remove a cholesteatoma. After this surgery, the infection almost always goes away. Whether full hearing returns depends on the extent of damage and how well the ear heals after surgery.

National Institute on Deafness and Other Communication Disorders
http://www.nidcd.nih.gov/