A brain aneurysm (AN-yoo-riz-um) is a bulge or ballooning in a blood vessel in the brain. An aneurysm often looks like a berry hanging on a stem.

Most brain aneurysms, however, don't rupture, create health problems or cause symptoms. Such aneurysms are often detected during tests for other conditions.

Treatment for an unruptured brain aneurysm may be appropriate in some cases and may prevent a rupture in the future. Talk with your health care provider to ensure you understand the best options for your specific needs. 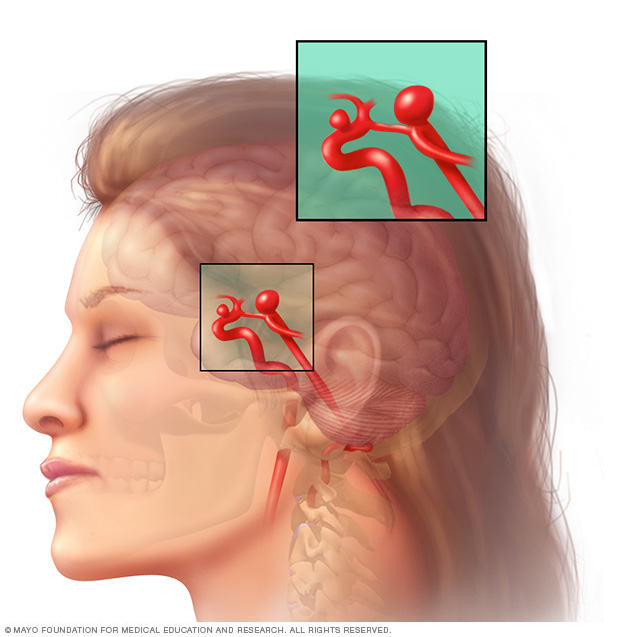 An aneurysm is a ballooning at a weak spot in an artery wall. An aneurysm's walls can be thin enough to rupture. The illustration shows an individual with an unruptured aneurysm. The inset shows what happens when the aneurysm ruptures.

A sudden, severe headache is the key symptom of a ruptured aneurysm. This headache is often described as the "worst headache" ever experienced.

In addition to a severe headache, common signs and symptoms of a ruptured aneurysm include:

In some cases, an aneurysm may leak a slight amount of blood. This leaking may cause only a sudden, extremely severe headache.

Seek immediate medical attention if you develop a:

If you're with someone who complains of a sudden, severe headache or who loses consciousness or has a seizure, call 911 or your local emergency number.

Brain aneurysms develop as a result of thinning artery walls. Aneurysms often form at forks or branches in arteries because those areas of the vessels are weaker.

Although aneurysms can appear anywhere in the brain, they are most common in arteries at the base of the brain.

The causes of most brain aneurysm are unknown, but a range of factors may increase your risk.

Some of these risk factors develop over time, while others are present at birth.

Risk factors that develop over time

Some types of aneurysms may occur after a head injury or from certain blood infections.

Some conditions that are present at birth can be associated with an elevated risk of developing a brain aneurysm. These include:

When a brain aneurysm ruptures, the bleeding usually lasts only a few seconds. However, the blood can cause direct damage to surrounding cells, and the bleeding can damage or kill other cells. It also increases pressure inside the skull.

If the pressure becomes too high, it may disrupt the blood and oxygen supply to the brain and loss of consciousness or even death may occur.

Complications that can develop after the rupture of an aneurysm include:

If you experience a sudden, severe headache or other symptoms that could be related to a ruptured aneurysm, you'll be given tests to determine whether you've had bleeding into the space between your brain and surrounding tissues (subarachnoid hemorrhage). The tests can also determine if you've had another type of stroke.

You may also be given tests if you show symptoms of an unruptured brain aneurysm, such as pain behind the eye, changes in vision or double vision.

The use of imaging tests to screen for unruptured brain aneurysms is generally not recommended unless you're at high risk. Talk to your health care provider about the potential benefit of a screening test if you have:

There are two common treatment options for a ruptured brain aneurysm.

Both procedures pose potential risks, particularly bleeding in the brain or loss of blood flow to the brain. The endovascular coil is less invasive and may be initially safer, but it may carry a slightly higher risk of needing a repeat procedure in the future due to the aneurysm reopening.

Newer treatments available for brain aneurysm include tubular stent-like implants (flow diverters) that work by diverting blood flow away from an aneurysm sac. The diversion stops blood movement within the aneurysm and stimulates the body to heal the site, encouraging reconstruction of the parent artery. Flow diverters may be particularly useful in larger aneurysms that can't be safely treated with other options.

Your neurosurgeon or interventional neuroradiologist, in collaboration with your neurologist, will make a recommendation based on the size, location and overall appearance of the brain aneurysm, your ability to undergo a procedure, and other factors.

Other treatments for ruptured aneurysms

Other treatments for ruptured brain aneurysms are aimed at relieving symptoms and managing complications.

A surgical clip, an endovascular coil or a flow diverter can be used to seal off an unruptured brain aneurysm and help prevent a future rupture. However, in some unruptured aneurysms, the known risks of the procedures may outweigh the potential benefit.

A neurologist, in collaboration with a neurosurgeon or interventional neuroradiologist, can help you determine whether the treatment is appropriate for you.

Factors to consider in making treatment recommendations include:

If you have high blood pressure, talk to your health care provider about medication to manage the condition. If you have a brain aneurysm, proper control of blood pressure may lower the risk of rupture.

In addition, if you smoke cigarettes, talk with your care provider about strategies to stop smoking since cigarette smoking is a risk factor for formation, growth and rupture of the aneurysm.

Lifestyle changes to lower your risk

If you have an unruptured brain aneurysm, you may lower the risk of its rupture by making these lifestyle changes: 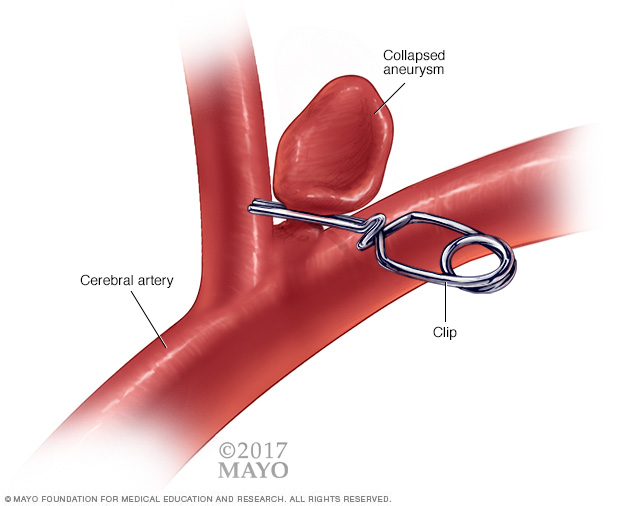 A surgical procedure to treat brain aneurysms involves opening the skull, finding the affected artery and then placing a metal clip over the neck of the aneurysm. 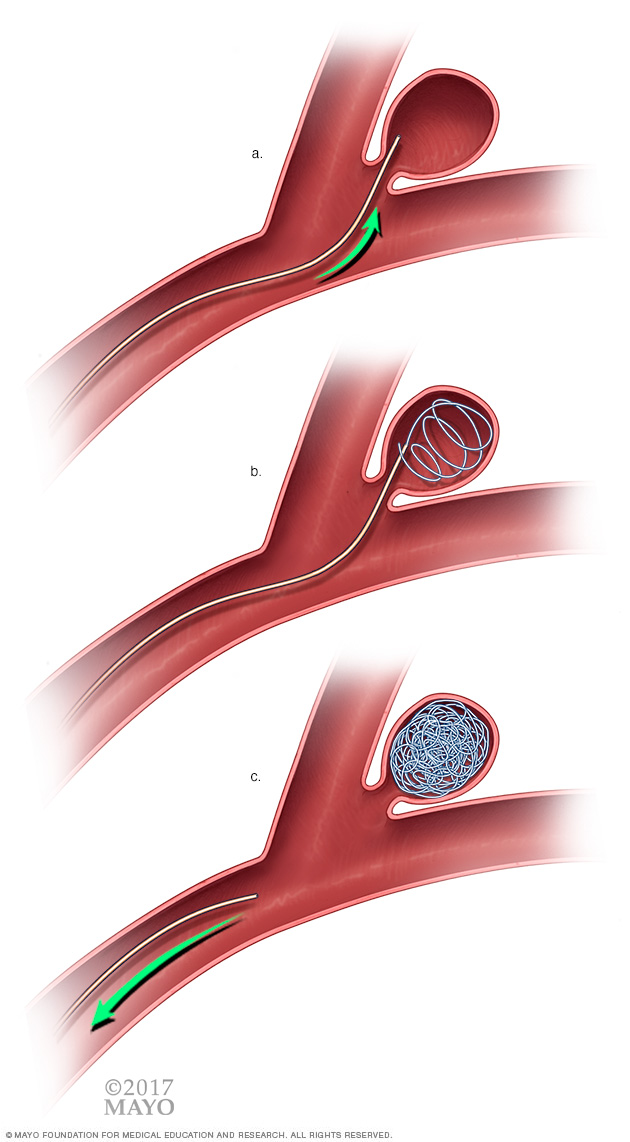 With endovascular coiling, the surgeon feeds a soft, flexible wire into the aneurysm via a catheter. The wire coils inside the aneurysm and seals off the aneurysm from the artery.

The Brain Aneurysm Foundation offers information on connecting with support groups in many states and in other countries, including the Mayo Clinic Brain Aneurysm Support Group.

Brain aneurysms are often detected after they've ruptured and become medical emergencies. However, a brain aneurysm may be detected when you've undergone head-imaging tests for another condition.

If such test results indicate you have a brain aneurysm, you'll need to discuss the results with a specialist in brain and nervous system disorders (neurologist, neurosurgeon or neuroradiologist).

To make the best use of your time with your health care provider, you may want to prepare a list of questions, such as:

Your neurologist, neurosurgeon or neuroradiologist may ask you the following questions to help determine the best course of action: