Valstar is an anthracycline topoisomerase inhibitor indicated for intravesical therapy of BCG-refractory carcinoma in situ (CIS) of the urinary bladder in patients for whom immediate cystectomy would be associated with unacceptable morbidity or mortality.

For Intravesical Use Only. Do NOT administer by intravenous or intramuscular routes.

Valstar is recommended at a dose of 800 mg administered intravesically once a week for six weeks. Delay administration at least two weeks after transurethral resection and/or fulguration [ see Warnings and Precautions ( 5.2, 5.3)].

Handle and dispose of Valstar in a manner consistent with other cytotoxic drugs. 1 The use of goggles, gloves, and protective gowns is recommended during preparation and administration of the drug.

Valstar contains polyoxyl castor oil, which has been known to cause leaching of di(2-ethylhexyl) phthalate (DEHP) a hepatotoxic plasticizer, from polyvinyl chloride (PVC) bags and intravenous tubing. Valstar should be prepared and stored in glass, polypropylene, or polyolefin containers and tubing. It is recommended that non-DEHP containing administration sets, such as those that are polyethylene-lined, be used.

Valstar is a sterile, clear red solution. Visually inspect for particulate matter and discoloration prior to administration. At temperatures below 4°C (39°F), polyoxyl castor oil may begin to form a waxy precipitate. If this happens, the vial should be warmed in the hand until the solution is clear. If particulate matter is still seen, do not administer Valstar.

For each instillation, slowly allow four 5 mL vials (200 mg valrubicin/5 mL vial) to warm to room temperature, but do not heat. Withdraw 20 mL of Valstar from the four vials and dilute with 55 mL of 0.9% Sodium Chloride Injection, USP to provide 75 mL of a diluted Valstar solution. Valstar diluted in 0.9% Sodium Chloride Injection, USP for administration is stable for 12 hours at temperatures up to 25°C (77°F). Since compatibility data are not available, do not mix Valstar with other drugs.

Insert a urethral catheter into the patient's bladder under aseptic conditions, drain the bladder, and instill the diluted 75 mL Valstar solution slowly via gravity flow over a period of several minutes. Withdraw the catheter and retain Valstar in the bladder for two hours before voiding. At the end of two hours, all patients should void. Some patients may be unable to retain the drug for the full two hours. Instruct patients to maintain adequate hydration following Valstar treatment [see Patient Counseling Information ( 17)] .

Valstar is contraindicated in patients with:

Inform patients that Valstar has been shown to induce complete response in only about 1 in 5 patients with BCG-refractory CIS, and that delaying cystectomy could lead to development of metastatic bladder cancer, which is lethal. The exact risk of developing metastatic bladder cancer from such a delay may be difficult to assess [see Clinical Studies ( 14)] but increases the longer cystectomy is delayed in the presence of persisting CIS. If there is not a complete response of CIS to treatment after 3 months or if CIS recurs, reconsider cystectomy.

Risks in Patients with Perforated Bladder

Evaluate the bladder before the intravesical instillation of drug and do not administer Valstar to patients with a perforated bladder or to those in whom the integrity of the bladder mucosa has been compromised [see Contraindications ( 4)] . In case of bladder perforation, delay the administration of Valstar until bladder integrity has been restored. One patient with a perforated bladder who received 800 mg of Valstar intravesically developed severe leukopenia and neutropenia approximately two weeks after drug administration [see Clinical Pharmacology ( 12.3)] .

Risk in Patients Undergoing Transurethral Resection of the Bladder (TURB)

To avoid systemic exposure to Valstar for the patients undergoing TURB, evaluate the status of the bladder before the intravesical instillation of drug. Delay administration at least two weeks after transurethral resection and/or fulguration.

Use Valstar with caution in patients with severe irritable bladder symptoms. Bladder spasm and spontaneous discharge of the intravesical instillate may occur; clamping of the urinary catheter is not advised.

Based on findings in animal studies and its mechanism of action, Valstar can cause fetal harm when administered to a pregnant woman [see Clinical Pharmacology ( 12.1 and 12.3)] . In animal reproduction studies, intravenous administration of valrubicin to pregnant rats during the period of organogenesis at a dose about 0.2 times the recommended human intravesical dose caused embryo-fetal malformations and increased resorptions. Advise females who might become pregnant of the potential risk to a fetus.

Advise females of reproductive potential to use effective contraception during treatment with Valstar and for 6 months following the final dose [see Use in Specific Populations ( 8.1 and 8.3)] .

The safety of Valstar was assessed in 230 patients with transitional cell carcinoma of the bladder, including 205 patients who received multiple weekly doses. One hundred seventy-nine of the 205 patients received the approved dose and schedule of 800 mg weekly for multiple weeks.

Approximately 84% of patients who received intravesical Valstar in clinical studies experienced local adverse reactions. The local adverse reactions associated with Valstar usually occur during or shortly after instillation and resolve within 1 to 7 days after the instillate is removed from the bladder. Seven out of 143 patients (5%) who were scheduled to receive six doses of Valstar failed to receive all of the planned doses because of the occurrence of local bladder symptoms.

TABLE 1 displays the frequency of the local adverse reactions at baseline and during treatment among 179 patients who received 800 mg doses of Valstar in a multiple-cycle treatment regimen.

TABLE 2 displays the adverse reactions other than local bladder symptoms that occurred in 1% or more of the 230 patients who received at least one dose of Valstar in a clinical trial.

Adverse reactions other than local reactions that occurred in less than 1% of the patients who received Valstar intravesically in clinical trials are listed below.

No drug interaction studies were conducted.

Based on findings in animal studies and its mechanism of action, Valstar can cause fetal harm when administered to a pregnant females [see Clinical Pharmacology ( 12.1 and 12.3)] . There are no available data in pregnant females to inform the drug-associated risk. In animal reproduction studies, intravenous administration of valrubicin to pregnant rats during the period of organogenesis at a dose about 0.2 times the recommended human intravesical dose caused embryo-fetal malformations and increased resorptions [see Data]. Advise females who are or might become pregnant of the potential risk to a fetus.

In the U.S. general population, the estimated background risk of major birth defects and miscarriage in clinically-recognized pregnancies is 2% to 4% and 15% to 20%, respectively.

There are no data on the presence of valrubicin or its metabolites in human milk, the effects of valrubicin on the breast-fed infant, or its effects on milk production. Because of the potential for serious adverse reactions in breast-fed infants from valrubicin, advise a lactating female not to breastfeed during treatment with Valstar and for 2 weeks after the final dose.

Females and Males of Reproduction Potential

Valstar can cause fetal harm when administered to a pregnant female. Advise females of reproductive potential to use effective contraception during treatment with Valstar and for 6 months after the final dose [see Use in Specific Populations ( 8.1)] .

Based on genotoxicity findings, advise men with female partners of reproductive potential to use effective contraception during treatment with Valstar and for 3 months following the final dose [see Non Clinical Toxicology ( 13.1)]

Studies of the effects of Valstar on human male or female fertility have not been done. Based on findings in animal studies, Valstar may impair fertility in males of reproductive potential [see Nonclinical Toxicology ( 13.1)] .

Because carcinoma in situ of the bladder generally occurs in older individuals, 85% of the patients enrolled in the clinical studies of Valstar were more than 60 years of age (49% of the patients were more than 70 years of age). In the primary efficacy studies, the mean age of the population was 69.5 years. There are no specific precautions regarding use of Valstar in geriatric patients who are otherwise in good health.

There is no known antidote for overdoses of Valstar. The primary anticipated complications of overdosage associated with intravesical administration would be consistent with irritable bladder symptoms.

Myelosuppression is possible if Valstar is inadvertently administered systemically or if significant systemic exposure occurs following intravesical administration (e.g., in patients with bladder rupture/perforation). Under such inadvertent exposures in the peritoneal cavity, the expected toxicities include leukopenia and neutropenia, beginning within 1 week of dose administration, with nadirs by the second week, and recovery generally by the third week. If Valstar is administered when bladder rupture or perforation is suspected, weekly monitoring of complete blood counts should be performed for 3 weeks.

Valstar contains valrubicin (N-trifluoroacetyladriamycin-14-valerate), which is a semisynthetic analog of the anthracycline doxorubicin as a cytotoxic agent. The chemical name of valrubicin is (2 S- cis)-2-[1,2,3,4,6,11-hexahydro-2,5,12-trihydroxy-7-methoxy-6,11-dioxo-4-[[2,3,6-trideoxy-3-[(trifluoroacetyl)amino]-α-L- lyxo-hexopyranosyl]oxyl]-2-naphthacenyl]-2-oxoethylpentanoate. Valrubicin is an orange or orange-red powder that is highly lipophilic, soluble in methylene chloride, ethanol, methanol and acetone, and relatively insoluble in water. Its chemical formula is C 34H 36F 3NO 13 and its molecular weight is 723.65. The chemical structure is shown in FIGURE 1. 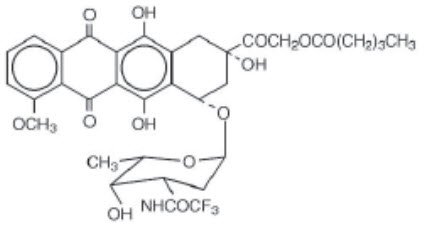 Valstar is intended for intravesical administration in the urinary bladder. It is supplied as a nonaqueous solution that should be diluted before intravesical administration. Each vial of Valstar contains 200 mg valrubicin at a concentration of 40 mg/mL in 5 mL of 50% polyoxyl castor oil/50% dehydrated alcohol, USP without preservatives or other additives. The solution is sterile and nonpyrogenic.

Valrubicin is an anthracycline that affects a variety of interrelated biological functions, most of which involve nucleic acid metabolism. In cells, it inhibits the incorporation of nucleosides into nucleic acids, causes chromosomal damage, and arrests the cell cycle in G 2. Although valrubicin does not bind strongly to DNA, valrubicin metabolites interfere with the normal DNA breaking-resealing action of DNA topoisomerase II. 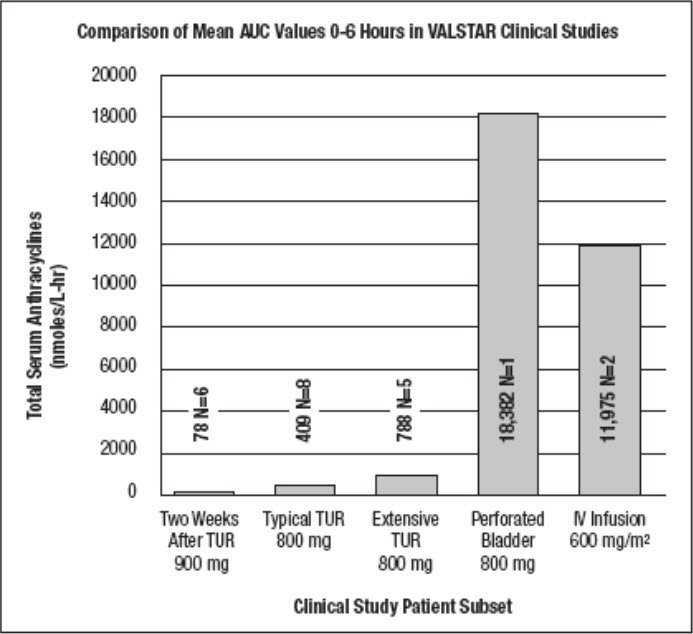 The carcinogenic potential of valrubicin has not been evaluated.

Studies in animals evaluating the effects of valrubicin on male or female fertility have not been conducted. Based on effects on male reproductive organs in general toxicology studies in dogs with intravesical instillation, valrubicin may impair fertility in male patients. When instilled into the bladder of male dogs weekly for 6 weeks, valrubicin caused mild to moderate atrophy of the prostate with inflammation, diffuse decrease in acinar size, epithelial changes. It also caused testicular degeneration, marked germ cell depletion, spermatid giant cells and karyomegaly.

Valstar was administered intravesically to a total of 230 patients with transitional cell carcinoma of the bladder, including 205 patients who received multiple weekly doses ranging from 200 to 900 mg. One hundred seventy-nine of the 205 patients received the approved dose and schedule of 800 mg weekly for multiple weeks. Patients receiving Valstar for refractory carcinoma in situ were monitored for disease recurrence or progression with cystoscopy, biopsy, and urine cytology every 3 months.

In the 90 study patients with BCG-refractory carcinoma in situ (CIS), 70% had received at least 2 courses of BCG and 30% had received one course of BCG and at least one additional course of treatment with another agent(s) - e.g., mitomycin, thiotepa, or interferon. Valstar was administered beginning at least two weeks after transurethral resection and/or fulguration.

After intravesical administration of Valstar, 16 patients (18%) had a complete response documented by bladder biopsies and cytology at 6 months following initiation of therapy. Median duration of response from start of treatment varied according to the method of analysis (13.5 months if measured to last bladder biopsy without tumor and 21 months if measured until time of documented recurrence). A retrospective analysis in the 16 patients with complete response to Valstar demonstrated that time to recurrence of their disease after treatment with Valstar was longer than time to recurrence after previous courses of intravesical therapy.

Local Adverse Reactions Before and During Treatment

Healthcare professionals can telephone Endo Pharmaceuticals (1-800-462-3636) for information on this product.

Valstar ® is a trademark of Endo Pharmaceuticals Inc. or one of its affiliates. 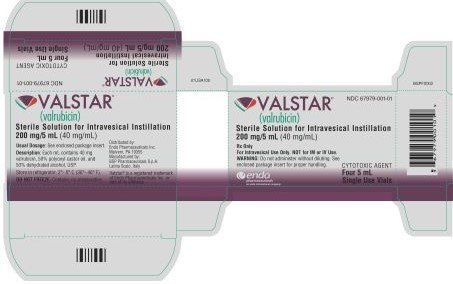