Phytonadione is a vitamin which is a clear, yellow to amber, viscous, and nearly odorless liquid. It is insoluble in water, soluble in chloroform and slightly soluble in ethanol. It has a molecular weight of 450.7.

Phytonadione is 2-methyl-3-phytyl-1, 4-naphthoquinone. Its empirical formula is C 31H 46O 2 and its structural formula is:

Phytonadione Tablets possess the same type and degree of activity as does naturally-occurring vitamin K, which is necessary for the production via the liver of active prothrombin (factor II), proconvertin (factor VII), plasma thromboplastin component (factor IX), and Stuart factor (factor X). The prothrombin test is sensitive to the levels of three of these four factors – II, VII, and X. Vitamin K is an essential cofactor for a microsomal enzyme that catalyzes the posttranslational carboxylation of multiple, specific, peptide-bound glutamic acid residues in inactive hepatic precursors of factors II, VII, IX, and X. The resulting gamma-carboxyglutamic acid residues convert the precursors into active coagulation factors that are subsequently secreted by liver cells into the blood.

Oral phytonadione is adequately absorbed from the gastrointestinal tract only if bile salts are present. After absorption, phytonadione is initially concentrated in the liver, but the concentration declines rapidly. Very little vitamin K accumulates in tissues. Little is known about the metabolic fate of vitamin K. Almost no free unmetabolized vitamin K appears in bile or urine.

In normal animals and humans, phytonadione is virtually devoid of pharmacodynamic activity. However, in animals and humans deficient in vitamin K, the pharmacological action of vitamin K is related to its normal physiological function, that is, to promote the hepatic biosynthesis of vitamin K-dependent clotting factors.

Phytonadione Tablets generally exert their effect within 6 to 10 hours.

Indications and Usage for Phytonadione Tablets

Phytonadione Tablets are indicated in the following coagulation disorders which are due to faulty formation of factors II, VII, IX and X when caused by vitamin K deficiency or interference with vitamin K activity.

Phytonadione Tablets are indicated in:

Hypersensitivity to any component of this medication.

An immediate coagulant effect should not be expected after administration of phytonadione.

Phytonadione will not counteract the anticoagulant action of heparin.

Phytonadione is not a clotting agent, but overzealous therapy with vitamin K 1 may restore conditions which originally permitted thromboembolic phenomena. Dosage should be kept as low as possible, and prothrombin time should be checked regularly as clinical conditions indicate.

Repeated large doses of vitamin K are not warranted in liver disease if the response to initial use of the vitamin is unsatisfactory. Failure to respond to vitamin K may indicate a congenital coagulation defect or that the condition being treated is unresponsive to vitamin K.

Prothrombin time should be checked regularly as clinical conditions indicate.

Studies of carcinogenicity or impairment of fertility have not been performed with phytonadione. Phytonadione at concentrations up to 2,000 mcg/plate, with or without metabolic activation, was negative in the Ames microbial mutagen test.

Safety and effectiveness in pediatric patients have not been established with Phytonadione Tablets. Hemolysis, jaundice, and hyperbilirubinemia in newborns, particularly in premature infants, have been reported with vitamin K.

Clinical studies of Phytonadione Tablets did not include sufficient numbers of subjects aged 65 and over to determine whether they respond differently from younger subjects. Other reported clinical experience has not identified differences in responses between the elderly and younger patients. In general, dose selection for an elderly patient should be cautious, usually starting at the low end of the dosing range, reflecting the greater frequency of decreased hepatic, renal, or cardiac function, and of concomitant disease or other drug therapy.

Transient “flushing sensations” and “peculiar” sensations of taste have been observed with parenteral phytonadione, as well as rare instances of dizziness, rapid and weak pulse, profuse sweating, brief hypotension, dyspnea, and cyanosis.

Hyperbilirubinemia has been observed in the newborn following administration of parenteral phytonadione. This has occurred rarely and primarily with doses above those recommended.

The intravenous and oral LD 50s in the mouse are approximately 1.17 g/kg and greater than 24.18 g/kg, respectively.

To correct excessively prolonged prothrombin times caused by oral anticoagulant therapy, 2.5 to 10 mg or up to 25 mg initially is recommended. In rare instances 50 mg may be required. Frequency and amount of subsequent doses should be determined by prothrombin time response or clinical condition (see WARNINGS). If, in 12 to 48 hours after oral administration, the prothrombin time has not been shortened satisfactorily, the dose should be repeated.

Hypoprothrombinemia Due to Other Causes in Adults

If possible, discontinuation or reduction of the dosage of drugs interfering with coagulation mechanisms (such as salicylates, antibiotics) is suggested as an alternative to administering concurrent Phytonadione Tablets. The severity of the coagulation disorder should determine whether the immediate administration of Phytonadione Tablets is required in addition to discontinuation or reduction of interfering drugs.

A dosage of 2.5 to 25 mg or more (rarely up to 50 mg) is recommended, the amount and route of administration depending upon the severity of the condition and response obtained.

The oral route should be avoided when the clinical disorder would prevent proper absorption. Bile salts must be given with the tablets when the endogenous supply of bile to the gastrointestinal tract is deficient.

How is Phytonadione Tablets Supplied

Phytonadione Tablets, 5 mg vitamin K 1, are yellow, round, scored, compressed tablets, coded VRX 405 on one side and MEPHYTON on the other. They are supplied as follows:

Mephyton is a trademark of Bausch Health Companies Inc. or its affiliates. 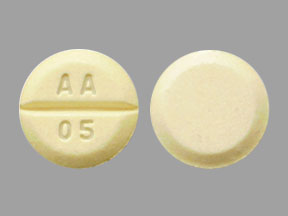