Expand
WARNING - HYPERSENSITIVITY REACTIONS WITH INTRAVENOUS AND INTRAMUSCULAR USE

Fatal hypersensitivity reactions, including anaphylaxis, have occurred during and immediately after intravenous and intramuscular injection of Phytonadione. Reactions have occurred despite dilution to avoid rapid intravenous infusion and upon first dose. Avoid the intravenous and intramuscular routes of administration unless the subcutaneous route is not feasible and the serious risk is justified [see WARNINGS AND PRECAUTIONS (5.1)].

Treatment of Hypoprothrombinemia Due to Vitamin K Deficiency or Interference

Phytonadione is indicated for the treatment of the following coagulation disorders which are due to faulty formation of factors II, VII, IX and X when caused by vitamin K deficiency or interference with vitamin K activity:

Prophylaxis and Treatment of Vitamin K Deficiency Bleeding in Neonates

Phytonadione is indicated for prophylaxis and treatment of vitamin K-deficiency bleeding in neonates.

Whenever possible, administer Phytonadione by the subcutaneous route [see WARNING — HYPERSENSITIVITY REACTIONS WITH INTRAVENOUS AND INTRAMUSCULAR USE]. When intravenous administration is unavoidable, inject the drug very slowly, not exceeding 1 mg per minute [see WARNINGS AND PRECAUTIONS (5.1)].

The coagulant effects of Phytonadione are not immediate; improvement of INR may take 1-8 hours. Interim use of whole blood or component therapy may also be necessary if bleeding is severe.

Whenever possible, administer benzyl alcohol-free formulations in pediatric patients [see WARNINGS AND PRECAUTIONS(5.2) and USE IN SPECIFIC POPULATIONS (8.4)].

Repeated large doses of Phytonadione are not warranted in liver disease if the initial response is unsatisfactory. Failure to respond to Phytonadione may indicate that the condition being treated is inherently unresponsive to Phytonadione.

Evaluate INR after 6-8 hours, and repeat dose if INR remains prolonged. Modify subsequent dosage (amount and frequency) based on the INR or clinical condition.

2.3 Recommended Dosage for Prophylaxis and Therapy of Vitamin K Deficiency Bleeding in Neonates

Prophylaxis of Vitamin K-Deficiency Bleeding in Neonates
The recommended dosage of Phytonadione is 0.5 mg to 1 mg within one hour of birth for a single dose.

Treatment of Vitamin K Deficiency Bleeding in Neonates
The recommended dosage of Phytonadione is 1 mg given either subcutaneously or intramuscularly. Consider higher doses if the mother has been receiving oral anticoagulants.

A failure to respond (shortening of the INR in 2 to 4 hours) may indicated another diagnosis or coagulation disorder.

When diluted start administration of Phytonadione immediately after dilution.
Discard unused portions of diluted solution as well as unused contents of the ampul.

Protect Phytonadione from light at all times.

Hypersensitivity to phytonadione or any other component of this medication. [see WARNINGS AND PRECAUTIONS (5.1)].

Fatal and severe hypersensitivity reactions, including anaphylaxis, have occurred with intravenous or intramuscular administration of Phytonadione. Reactions have occurred despite dilution to avoid rapid intravenous infusion and upon first dose. These reactions have included shock, cardiorespiratory arrest, flushing, diaphoresis, chest pain, tachycardia, cyanosis, weakness, and dyspnea. Administer Phytonadione subcutaneously whenever feasible. Avoid the intravenous and intramuscular routes of administration unless the subcutaneous route is not feasible and the serious risk is justified [see DOSAGE AND ADMINISTRATION (2)].

5.2 Risk of Serious Adverse Reaction in Infants due to Benzyl Alcohol Preservative

Use benzyl alcohol-free formulations in neonates and infants, if available. Serious and fatal adverse reactions including “gasping syndrome” can occur in neonates and infants treated with benzyl alcohol-preserved drugs, including Phytonadione. The “gasping syndrome” is characterized by central nervous system depression, metabolic acidosis, and gasping respirations.

The following adverse reactions have been identified during post-approval use of Phytonadione. Because these reactions were reported voluntarily from a population of uncertain size, it is not always possible to reliably estimate their frequency or establish a causal relationship to drug exposure.

Phytonadione does not affect the anticoagulant action of heparin.

Risk Summary
Phytonadione contains benzyl alcohol, which has been associated with gasping syndrome in neonates. The preservative benzyl alcohol can cause serious adverse events and death when administered intravenously to neonates and infants. If Phytonadione is needed during pregnancy, consider using a benzyl alcohol-free formulation [see WARNINGS AND PRECAUTIONS (5.2) and USE IN SPECIFIC POPULATIONS (8.4)].

Data
Human Data
Phytonadione has been measured in cord blood of infants whose mothers were treated with phytonadione during pregnancy in concentrations lower than seen in maternal plasma. Administration of vitamin K1 to pregnant women shortly before delivery increased both maternal and cord blood concentrations. Published data do not report a clear association with phytonadione and adverse maternal or fetal outcomes when used during pregnancy. However, these studies cannot definitively establish the absence of any risk because of methodologic limitations including small sample size and lack of blinding.

Risk Summary
Phytonadione contains benzyl alcohol. If available, preservative-free Phytonadione is recommended when Phytonadione is needed during lactation [see WARNINGS AND PRECAUTIONS (5.2) and USE IN SPECIFIC POPULATIONS (8.4)].

Serious adverse reactions including fatal reactions and the “gasping syndrome” occurred in premature neonates and infants in the intensive care unit who received drugs containing benzyl alcohol as a preservative. In these cases, benzyl alcohol dosages of 99 to 234 mg/kg/day produced high levels of benzyl alcohol and its metabolites in the blood and urine (blood levels of benzyl alcohol were 0.61 to 1.378 mmol/L). Additional adverse reactions included gradual neurological deterioration, seizures, intracranial hemorrhage, hematologic abnormalities, skin breakdown, hepatic and renal failure, hypotension, bradycardia, and cardiovascular collapse. Preterm, low-birth weight infants may be more likely to develop these reactions because they may be less able to metabolize benzyl alcohol.

Whenever possible, use preservative-free phytonadione formulations in neonates. The preservative benzyl alcohol has been associated with serious adverse events and death in pediatric patients. Premature and low-birth weight infants may be more likely to develop toxicity.

Hemolysis, jaundice, and hyperbilirubinemia in newborns, particularly in premature infants, may result from Phytonadione overdose.

Phytonadione is a vitamin K replacement, which is a clear, yellow to amber, viscous, odorless or nearly odorless liquid. It is insoluble in water, soluble in chloroform and slightly soluble in ethanol. It has a molecular weight of 450.70.

Phytonadione is 2-methyl-3-phytyl-1, 4-naphthoquinone. Its empirical formula is C31H46O2 and its molecular structure is:

Phytonadione aqueous colloidal solution of vitamin K1 for parenteral injection, possesses the same type and degree of activity as does naturally-occurring vitamin K, which is necessary for the production via the liver of active prothrombin (factor II), proconvertin (factor VII), plasma thromboplastin component (factor IX), and Stuart factor (factor X). Vitamin K is an essential cofactor for a microsomal enzyme that catalyzes the post- translational carboxylation of multiple, specific, peptide-bound glutamic acid residues in inactive hepatic precursors of factors II, VII, IX, and X. The resulting gamma-carboxy-glutamic acid residues convert the precursors into active coagulation factors that are subsequently secreted by liver cells into the blood.

The action of the aqueous dispersion, when administered intravenously, is generally detectable within an hour or two and hemorrhage is usually controlled within 3 to 6 hours. A normal INR may often be obtained in 12 to 14 hours.

Distribution:
After absorption, phytonadione is initially concentrated in the liver, but the concentration declines rapidly. Very little vitamin K accumulates in tissues.

Elimination:
Little is known about the metabolic fate of vitamin K. Almost no free unmetabolized vitamin K appears in bile or urine.

Studies of carcinogenicity, genotoxicity or impairment of fertility have not been conducted with phytonadione.

Phytonadione is a yellow, sterile, aqueous colloidal solution and is supplied in a package of 25 as follows:

Protect Phytonadione from light. Store container in closed original carton until contents have been used.

NOTE: Parenteral drug products should be inspected visually for particulate matter and discoloration prior to administration whenever solution and container permit.

Inform the patient of the following important risks of Phytonadione.

Risk of Gasping Syndrome Due to Benzyl Alcohol
Advise the patient and caregivers of the risk of gasping syndrome associated with the use of products that contain benzyl alcohol (including Phytonadione) in neonates, infants, and pregnant women [see WARNINGS AND PRECAUTIONS (5.2)].

Cutaneous Reactions
Advise the patient and caregivers to report the occurrence of new rashes after receiving Phytonadione. These reactions may be delayed for up to a year after treatment [see WARNINGS AND PRECAUTIONS (5.3)].

Contains no more than 110 mcg/L of aluminum.
Protect from light.

Contains no more than 110 mcg/L of aluminum.
Protect from light. 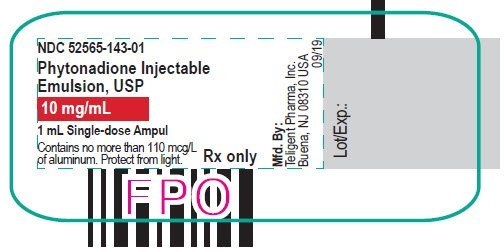