Phytonadione is a vitamin, which is a clear, yellow to amber, viscous, odorless or nearly odorless liquid. It is insoluble in water, soluble in chloroform and slightly soluble in ethanol. It has a molecular weight of 450.70. Phytonadione is 2-methyl-3-phytyl-1, 4-naphthoquinone. Its empirical formula is C31H46O2 and its structural formula is:

Vitamin K1 Injection (Phytonadione Injectable Emulsion, USP) aqueous dispersion of Vitamin K1 for parenteral injection, possesses the same type and degree of activity as does naturally-occurring vitamin K, which is necessary for the production via the liver of active prothrombin (factor II), proconvertin (factor VII), plasma thromboplastin component (factor IX), and Stuart factor (factor X). The prothrombin test is sensitive to the levels of three of these four factors-II, VII, and X. Vitamin K is an essential cofactor for a microsomal enzyme that catalyzes the post-translational carboxylation of multiple, specific, peptide-bound glutamic acid residues in inactive hepatic precursors of factors II, VII, IX, and X. The resulting gamma-carboxy-glutamic acid residues convert the precursors into active coagulation factors that are subsequently secreted by liver cells into the blood. Phytonadione is readily absorbed following intramuscular administration. After absorption, phytonadione is initially concentrated in the liver, but the concentration declines rapidly. Very little vitamin K accumulates in tissues. Little is known about the metabolic fate of vitamin K. Almost no free unmetabolized vitamin K appears in bile or urine. In normal animals and humans, phytonadione is virtually devoid of pharmacodynamic activity. However, in animals and humans deficient in vitamin K, the pharmacological action of vitamin K is related to its normal physiological function, that is, to promote the hepatic biosynthesis of vitamin K dependent clotting factors. The action of the aqueous dispersion, when administered intravenously, is generally detectable within an hour or two and hemorrhage is usually controlled within 3 to 6 hours. A normal prothrombin level may often be obtained in 12 to 14 hours. In the prophylaxis and treatment of hemorrhagic disease of the newborn, phytonadione has demonstrated a greater margin of safety than that of the water-soluble vitamin K analogues.

• anticoagulant-induced prothrombin deficiency caused by coumarin or indanedione derivatives;
• prophylaxis and therapy of hemorrhagic disease of the newborn;
• hypoprothrombinemia due to antibacterial therapy;
• hypoprothrombinemia secondary to factors limiting absorption or synthesis of vitamin K, e.g., obstructive jaundice, biliary fistula, sprue, ulcerative colitis, celiac disease, intestinal resection, cystic fibrosis of the pancreas, and regional enteritis;
• other drug-induced hypoprothrombinemia where it is definitely shown that the result is due to interference with vitamin K metabolism, e.g., salicylates.

Hypersensitivity to any component of this medication.

Benzyl alcohol as a preservative in Bacteriostatic Sodium Chloride Injection has been associated with toxicity in newborns. Data are unavailable on the toxicity of other preservatives in this age group. There is no evidence to suggest that the small amount of benzyl alcohol contained in Vitamin K1 Injection (Phytonadione Injectable Emulsion, USP), when used as recommended, is associated with toxicity.

An immediate coagulant effect should not be expected after administration of phytonadione. It takes a minimum of 1 to 2 hours for measurable improvement in the prothrombin time. Whole blood or component therapy may also be necessary if bleeding is severe. Phytonadione will not counteract the anticoagulant action of heparin. When Vitamin K1 is used to correct excessive anticoagulant-induced hypoprothrombinemia, anticoagulant therapy still being indicated, the patient is again faced with the clotting hazards existing prior to starting the anticoagulant therapy. Phytonadione is not a clotting agent, but overzealous therapy with Vitamin K1 may restore conditions which originally permitted thromboembolic phenomena. Dosage should be kept as low as possible, and prothrombin time should be checked regularly as clinical conditions indicate.

Repeated large doses of vitamin K are not warranted in liver disease if the response to initial use of the vitamin is unsatisfactory. Failure to respond to vitamin K may indicate that the condition being treated is inherently unresponsive to vitamin K. Benzyl alcohol has been reported to be associated with a fatal “Gasping Syndrome” in premature infants. WARNING: This product contains aluminum that may be toxic. Aluminum may reach toxic levels with prolonged parenteral administration if kidney function is impaired. Premature neonates are particularly at risk because their kidneys are immature, and they required large amounts of calcium and phosphate solutions, which contain aluminum. Research indicates that patients with impaired kidney function, including premature neonates, who receive parenteral levels of aluminum at greater than 4 to 5 mcg/kg/day accumulate aluminum at levels associated with central nervous system and bone toxicity. Tissue loading may occur at even lower rates of administration.

Carcinogenesis, Mutagenesis, Impairment of Fertility
Studies of carcinogenicity, mutagenesis or impairment of fertility have not been conducted with Vitamin K1 Injection (Phytonadione Injectable Emulsion, USP).

Pediatric Use
Hemolysis, jaundice, and hyperbilirubinemia in neonates, particularly those that are premature, may be related to the dose of Vitamin K1 Injection. Therefore, the recommended dose should not be exceeded (see ADVERSE REACTIONS and DOSAGE AND ADMINISTRATION).

Deaths have occurred after intravenous and intramuscular administration. (See Box Warning.) Transient “flushing sensations” and “peculiar” sensations of taste have been observed, as well as rare instances of dizziness, rapid and weak pulse, profuse sweating, brief hypotension, dyspnea, and cyanosis. Pain, swelling, and tenderness at the injection site may occur. The possibility of allergic sensitivity including an anaphylactoid reaction, should be kept in mind. Infrequently, usually after repeated injection, erythematous, indurated, pruritic plaques have occurred; rarely, these have progressed to scleroderma-like lesions that have persisted for long periods. In other cases, these lesions have resembled erythema perstans. Hyperbilirubinemia has been observed in the newborn following administration of phytonadione. This has occurred rarely and primarily with doses above those recommended. (See PRECAUTIONS, Pediatric Use.)

The intravenous LD50 of Vitamin K1 Injection (Phytonadione Injectable Emulsion, USP) in the mouse is 41.5 and 52 mL/kg for the 0.2% and 1% concentrations, respectively.

Whenever possible, Vitamin K1 Injection (Phytonadione Injectable Emulsion, USP) should be given by the subcutaneous route. (See Box Warning.) When intravenous administration is considered unavoidable, the drug should be injected very slowly, not exceeding 1 mg per minute.
Protect from light at all times.
Parenteral drug products should be inspected visually for particulate matter and discoloration prior to administration, whenever solution and container permit.
Directions for Dilution
Vitamin K1 Injection may be diluted with 0.9% Sodium Chloride Injection, 5% Dextrose Injection, or 5% Dextrose and Sodium Chloride Injection. Benzyl alcohol as a preservative has been associated with toxicity in newborns. Therefore,all of the above diluents should be preservative-free (see WARNINGS). Other diluents should not be used. When dilutions are indicated, administration should be started immediately after mixture with the diluent, and unused portions of the dilution should be discarded, as well as unused contents of the ampul.
Prophylaxis of Hemorrhagic Disease of the Newborn
The American Academy of Pediatrics recommends that Vitamin K1 be given to the newborn. A single intramuscular dose of Vitamin K1 Injection 0.5 to 1 mg within one hour of birth is recommended.
Treatment of Hemorrhagic Disease of the Newborn
Empiric administration of Vitamin K1 should not replace proper laboratory evaluation of the coagulation mechanism. A prompt response (shortening of the prothrombin time in 2 to 4 hours) following administration of Vitamin K1 is usually diagnostic of hemorrhagic disease of the newborn, and failure to respond indicates another diagnosis or coagulation disorder. Vitamin K1 Injection 1 mg should be given either subcutaneously or intramuscularly. Higher doses may be necessary if the mother has been receiving oral anticoagulants. Whole blood or component therapy may be indicated if bleeding is excessive. This therapy, however, does not correct the underlying disorder and Vitamin K1 Injection should be given concurrently.
Anticoagulant-Induced Prothrombin Deficiency in Adults
To correct excessively prolonged prothrombin time caused by oral anticoagulant therapy—2.5 to 10 mg or up to 25 mg initially is recommended. In rare instances 50 mg may be required. Frequency and amount of subsequent doses should be determined by prothrombin time response or clinical condition (see WARNINGS). If in 6 to 8 hours after parenteral administration the prothrombin time has not been shortened satisfactorily, the dose should be repeated. 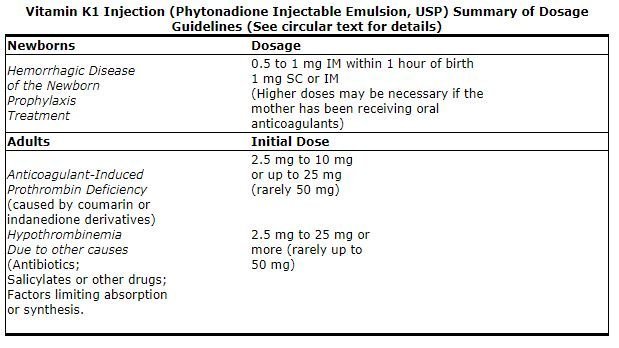 In the event of shock or excessive blood loss, the use of whole blood or component therapy is indicated.

Hypoprothrombinemia Due to Other Causes in Adults
A dosage of 2.5 to 25 mg or more (rarely up to 50 mg) is recommended, the amount and route of administration depending upon the severity of the condition and response obtained.
If possible, discontinuation or reduction of the dosage of drugs interfering with coagulation mechanisms (such as salicylates; antibiotics) is suggested as an alternative to administering concurrent Vitamin K1 Injection. The severity of the coagulation disorder should determine whether the immediate administration of Vitamin K1 Injection is required in addition to discontinuation or reduction of interfering drugs.

Vitamin K1 Injection (Phytonadione Injectable Emulsion, USP) is supplied in a package of 25 as follows:

Protect from light. Keep ampuls in tray until time of use. 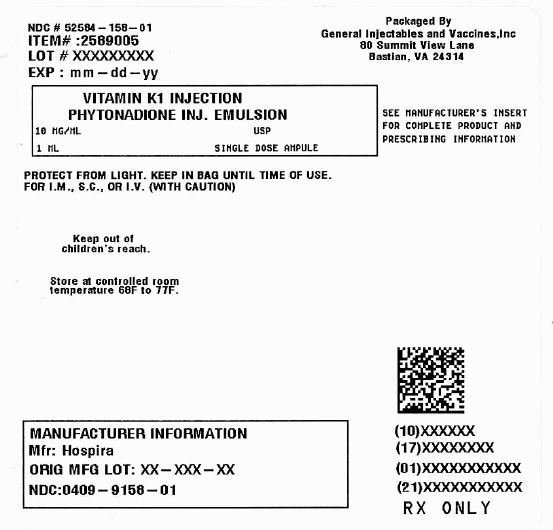