Neomycin sulfate is the sulfate salt of neomycin B and C, which are produced by the growth of Streptomyces fradiae Waksman (Fam. Streptomycetaceae). It has a potency equivalent of not less than 600 micrograms of neomycin standard per mg, calculated on an anhydrous basis. The structural formulae are:

Bacitracin zinc is the zinc salt of bacitracin, a mixture of related cyclic polypeptides (mainly bacitracin A) produced by the growth of an organism of the licheniformis group of Bacillus subtilis var Tracy. It has a potency of not less than 40 bacitracin units per mg. The structural formula is:

A wide range of antibacterial action is provided by the overlapping spectra of neomycin, polymyxin B sulfate, and bacitracin.

Bacitracin is bactericidal for a variety of gram-positive and gram-negative organisms. It interferes with bacterial cell wall synthesis by inhibition of the regeneration of phospholipid receptors involved in peptidoglycan synthesis.

Neo-Polycin® Ophthalmic Ointment is indicated for the topical treatment of superficial infections of the external eye and its adnexa caused by susceptible bacteria. Such infections encompass conjunctivitis, keratitis, and keratoconjunctivitis, blepharitis and blepharoconjunctivitis.

Neo-Polycin® Ophthalmic Ointment is contraindicated in individuals who have shown hypersensitivity to any of its components.

NOT FOR INJECTION INTO THE EYE. Neomycin and polymyxin B sulfates and bacitracin zinc ophthalmic ointment should never be directly introduced into the anterior chamber of the eye. Ophthalmic ointments may retard corneal wound healing.

Application of products containing these ingredients should be avoided for the patient thereafter (see PRECAUTIONS: General).

As with other antibiotic preparations, prolonged use of neomycin and polymyxin B sulfates and bacitracin zinc ophthalmic ointment may result in overgrowth of nonsusceptible organisms including fungi. If superinfection occurs, appropriate measures should be initiated. Bacterial resistance to neomycin and polymyxin B sulfates and bacitracin zinc ophthalmic ointment may also develop. If purulent discharge, inflammation, or pain becomes aggravated, the patient should discontinue use of the medication and consult a physician. There have been reports of bacterial keratitis associated with the use of topical ophthalmic products in multiple-dose containers which have been inadvertently contaminated by patients, most of whom had a concurrent corneal disease or a disruption of the ocular epithelial surface (see PRECAUTIONS: Information for Patients). Allergic cross-reactions may occur which could prevent the use of any or all of the following antibiotics for the treatment of future infections: Kanamycin, paromomycin, streptomycin, and possibly gentamicin.

Patients should be instructed to avoid allowing the tip of the dispensing container to contact the eye, eyelid, fingers, or any other surface. The use of this product by more than one person may spread infection. Patients should also be instructed that ocular products, if handled improperly, can become contaminated by common bacteria known to cause ocular infections. Serious damage to the eye and subsequent loss of vision may result from using contaminated products (see PRECAUTIONS: General). If the condition persists or gets worse, or if a rash or allergic reaction develops, the patient should be advised to stop use and consult a physician. Do not use this product if you are allergic to any of the listed ingredients. Keep tightly closed when not in use. Keep out of reach of children.

Long-term studies in animals to evaluate carcinogenic or mutagenic potential have not been conducted with polymyxin B sulfate or bacitracin. Treatment of cultured human lymphocytes in vitro with neomycin increased the frequency of chromosome aberrations at the highest concentration (80 mcg/mL) tested; however, the effects of neomycin on carcinogenesis and mutagenesis in humans are unknown. Polymyxin B has been reported to impair the motility of equine sperm, but its effects on male or female fertility are unknown. No adverse effects on male or female fertility, litter size, or survival were observed in rabbits given bacitracin zinc 100 gm/ton of diet.

Adverse reactions have occurred with the anti-infective components of neomycin and polymyxin B sulfates and bacitracin zinc ophthalmic ointment. The exact incidence is not known. Reactions occurring most often are allergic sensitization reactions including itching, swelling, and conjunctival erythema (see WARNINGS). More serious hypersensitivity reactions, including anaphylaxis, have been reported rarely. Local irritation on instillation has also been reported.

Apply the ointment topically into the conjunctival sac of the affected eye(s) every 3 or 4 hours for 7 to 10 days, depending on the severity of the infection.

Neo-Polycin is a Registered Trademark of Perrigo Company

FOR TOPICAL OPHTHALMIC USE

neomycin and polymyxin B sulfates and bacitracin zinc 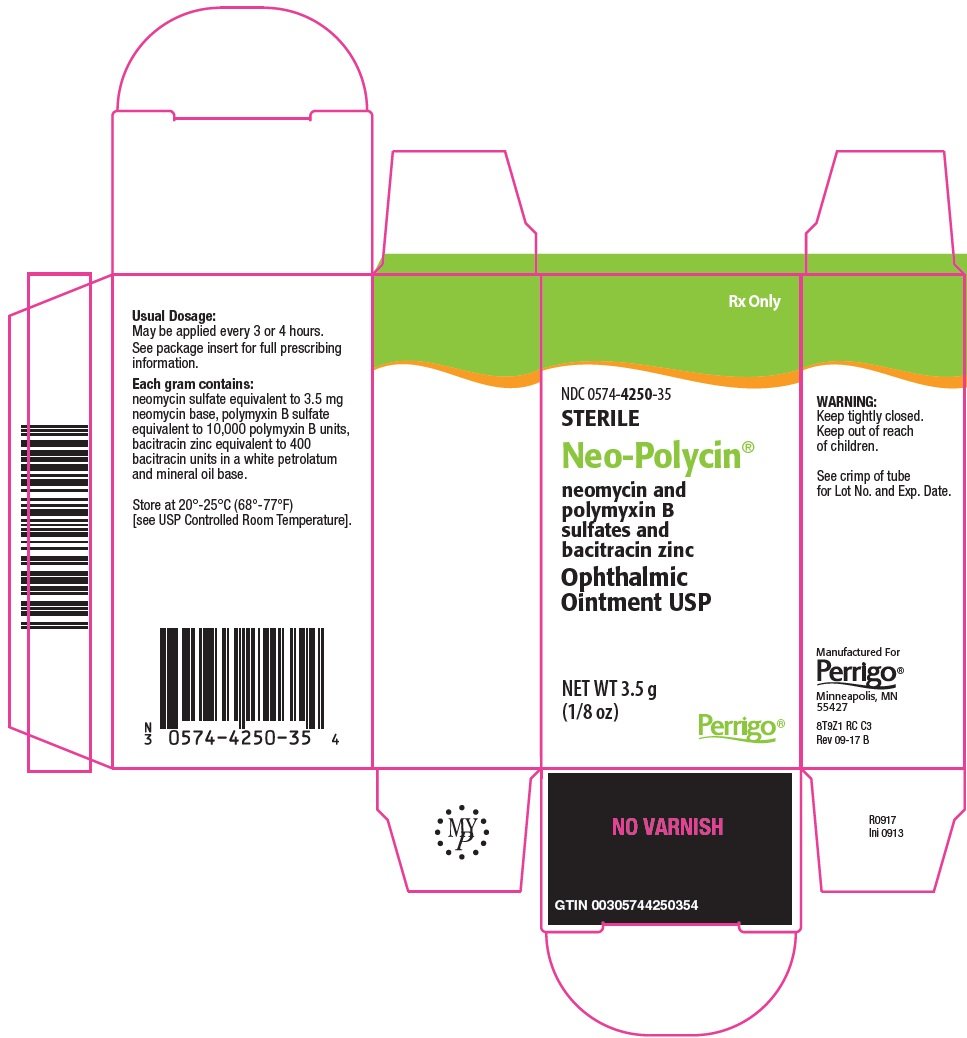