Moxifloxacin Ophthalmic Solution is indicated for the treatment of bacterial conjunctivitis caused by susceptible strains of the following organisms:

Instill one drop in the affected eye 3 times a day for 7 days. Moxifloxacin Ophthalmic Solution is for topical ophthalmic use.

Moxifloxacin Ophthalmic Solution is contraindicated in patients with a history of hypersensitivity to moxifloxacin, to other quinolones, or to any of the components in this medication.

In patients receiving systemically administered quinolones, including moxifloxacin, serious and occasionally fatal hypersensitivity (anaphylactic) reactions have been reported, some following the first dose. Some reactions were accompanied by cardiovascular collapse, loss of consciousness, angioedema (including laryngeal, pharyngeal or facial edema), airway obstruction, dyspnea, urticaria, and itching. If an allergic reaction to moxifloxacin occurs, discontinue use of the drug. Serious acute hypersensitivity reactions may require immediate emergency treatment. Oxygen and airway management should be administered as clinically indicated.

As with other anti-infectives, prolonged use may result in overgrowth of non-susceptible organisms, including fungi. If superinfection occurs, discontinue use and institute alternative therapy. Whenever clinical judgment dictates, the patient should be examined with the aid of magnification, such as slit-lamp biomicroscopy, and, where appropriate, fluorescein staining.

Patients should be advised not to wear contact lenses if they have signs or symptoms of bacterial conjunctivitis.

Nonocular adverse events reported at a rate of 1% to 4% were fever, increased cough, infection, otitis media, pharyngitis, rash, and rhinitis.

Drug-drug interaction studies have not been conducted with moxifloxacin. In vitro studies indicate that moxifloxacin does not inhibit CYP3A4, CYP2D6, CYP2C9, CYP2C19, or CYP1A2, indicating that moxifloxacin is unlikely to alter the pharmacokinetics of drugs metabolized by these cytochrome P450 isozymes.

There are no adequate and well-controlled studies with moxifloxacin in pregnant women to inform any drug-associated risks.

Embryo-fetal studies were conducted in pregnant rats administered with 20, 100, or 500 mg/kg/day moxifloxacin by oral gavage on Gestation Days 6 to 17, to target the period of organogenesis. Decreased fetal body weight and delayed skeletal development were observed at 500 mg/kg/day [277 times the human area under the curve (AUC) at the recommended human ophthalmic dose]. The No-Observed-Adverse-Effect-Level (NOAEL) for developmental toxicity was 100 mg/kg/day (30 times the human AUC at the recommended human ophthalmic dose).

A study in lactating rats has shown transfer of moxifloxacin into milk following oral administration.

The developmental and health benefits of breastfeeding should be considered along with the mother’s clinical need for moxifloxacin and any potential adverse effects on the breastfed child from moxifloxacin.

There is no evidence that the ophthalmic administration of moxifloxacin has any effect on weight bearing joints, even though oral administration of some quinolones has been shown to cause arthropathy in immature animals. 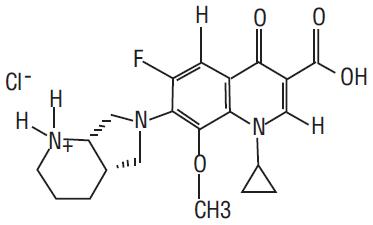 Moxifloxacin Ophthalmic Solution, USP is an isotonic solution with an osmolality of approximately 290 mOsm/kg.

Moxifloxacin is a member of the fluoroquinolone class of anti-infective drugs [see Microbiology (12.4)].

The antibacterial action of moxifloxacin results from inhibition of the topoisomerase II (DNA gyrase) and topoisomerase IV. DNA gyrase is an essential enzyme that is involved in the replication, transcription and repair of bacterial DNA. Topoisomerase IV is an enzyme known to play a key role in the partitioning of the chromosomal DNA during bacterial cell division.

Moxifloxacin has been shown to be active against most strains of the following microorganisms, both in vitro and in clinical infections as described in the Indications and Usage section:

The following in vitro data are also available, but their clinical significance in ophthalmic infections is unknown. The safety and effectiveness of moxifloxacin in treating ophthalmological infections due to these microorganisms have not been established in adequate and well-controlled trials.

The following organisms are considered susceptible when evaluated using systemic breakpoints. However, a correlation between the in vitro systemic breakpoint and ophthalmological efficacy has not been established. The list of organisms is provided as guidance only in assessing the potential treatment of conjunctival infections. Moxifloxacin exhibits in vitro minimal inhibitory concentrations (MICs) of 2 microgram/mL or less (systemic susceptible breakpoint) against most (greater than or equal to 90%) strains of the following ocular pathogens.

Long-term studies in animals to determine the carcinogenic potential of moxifloxacin have not been performed. However, in an accelerated study with initiators and promoters, moxifloxacin was not carcinogenic in rats following up to 38 weeks of oral dosing at 500 mg/kg/day (3224 times the highest recommended total daily human ophthalmic dose for a 60 kg person, based on body surface area).

Moxifloxacin was not mutagenic in four bacterial strains used in the Ames Salmonella reversion assay. As with other quinolones, the positive response observed with moxifloxacin in strain TA 102 using the same assay may be due to the inhibition of DNA gyrase. Moxifloxacin was not mutagenic in the CHO/HGPRT mammalian cell gene mutation assay. An equivocal result was obtained in the same assay when V79 cells were used. Moxifloxacin was clastogenic in the V79 chromosome aberration assay, but it did not induce unscheduled DNA synthesis in cultured rat hepatocytes. There was no evidence of genotoxicity in vivo in a micronucleus test or a dominant lethal test in mice.

Moxifloxacin had no effect on fertility in male and female rats at oral doses as high as 500 mg/kg/day, approximately 3224 times the highest recommended total daily human ophthalmic dose, based on body surface area. At 500 mg/kg/day orally, there were slight effects on sperm morphology (head-tail separation) in male rats and on the estrous cycle in female rats.

In two randomized, double-masked, multicenter, controlled clinical trials in which patients were dosed 3 times a day for 4 days, moxifloxacin produced clinical cures on Day 5 to 6 in 66% to 69% of patients treated for bacterial conjunctivitis. Microbiological success rates for the eradication of baseline pathogens ranged from 84% to 94%.

In a randomized, double-masked, multicenter, parallel-group clinical trial of pediatric patients with bacterial conjunctivitis between birth and 31 days of age, patients were dosed with moxifloxacin or another anti-infective agent. Clinical outcomes for the trial demonstrated a clinical cure rate of 80% at Day 9 and a microbiological eradication success rate of 92% at Day 9.

Please note that microbiologic eradication does not always correlate with clinical outcome in anti-infective trials.

Advise patients not to touch the dropper tip to any surface to avoid contaminating the contents.

Advise patients not to wear contact lenses if they have signs and symptoms of bacterial conjunctivitis [see Warnings and Precautions (5.3)].

Systemically administered quinolones including moxifloxacin have been associated with hypersensitivity reactions, even following a single dose. Instruct patients to discontinue use immediately and contact their physician at the first sign of a rash or allergic reaction [see Warnings and Precautions (5.1)]. 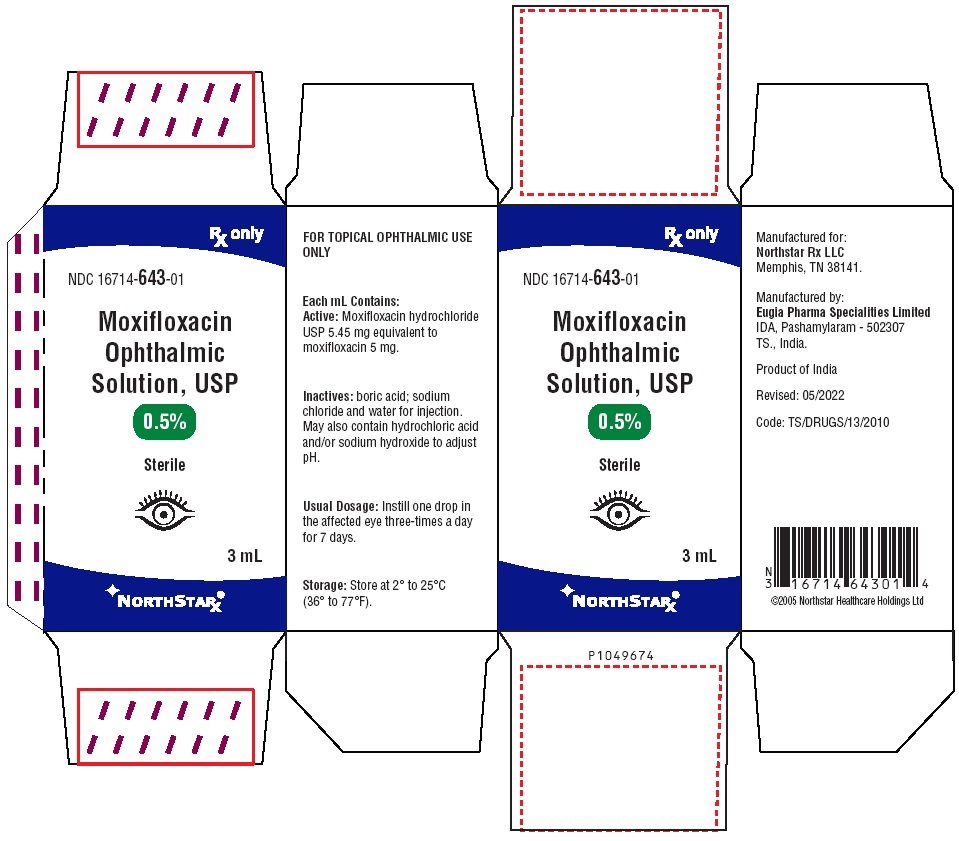