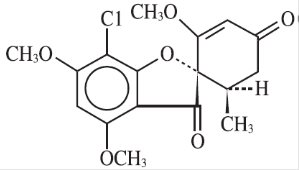 Griseofulvin absorption from the gastrointestinal tract varies considerably among individuals mainly because of insolubility of the drug in aqueous media of the upper GI tract. Drug absorption has been estimated to range between 27 and 72%. After an oral dose, Griseofulvin is primarily absorbed from the duodenum with some absorption occurring from the jejunum and ileum. The peak serum level in fasting adults given 0.5 g of Griseofulvin microsize occurs at about four hours and ranges between 0.5 to 2 mcg/mL. The serum level may be increased by giving the drug with a meal with a high fat content. In one study in pediatric patients 19 months to 11 years of age, 10 mg/kg of Griseofulvin microsize given with milk resulted in mean peak serum concentrations approximately four-fold greater than the same Griseofulvin dose given alone (1.29 mcg/mL versus 0.34 mcg/mL, respectively). Also, the area under the curve value was ten-fold larger when 10 mg/kg Griseofulvin and milk were administered simultaneously as compared to the same dosage given to fasting patients. In addition, Griseofulvin administered with milk resulted in more consistently detected serum levels across subjects.

Following oral administration, Griseofulvin is deposited in the keratin precursor cells and has a greater affinity for diseased tissue. The drug is tightly bound to the new keratin which becomes highly resistant to fungal invasions. When the drug is discontinued, Griseofulvin concentrations in the skin decline less rapidly than those in plasma.

Griseofulvin is metabolized by the liver to 6-desmethylGriseofulvin and its glucuronide conjugate.

The mechanism of Griseofulvin consists of binding microtubular proteins, which are required for mitosis.

Griseofulvin may be active against most strains of the following dermatophytes as described in the INDICATIONS AND USAGE section:

In vitro, Griseofulvin has been shown to have activity against many dermatophytes, but the clinical significance is unknown.

Although there have been reports of dermatophyte resistance to Griseofulvin, the clinical significance is unknown.

Indications and Usage for Griseofulvin

Griseofulvin oral suspension is indicated for the treatment of dermatophyte infections of the skin not adequately treated by topical therapy, hair and nails, namely:

Note:Prior to therapy, a dermatophyte should be identified as responsible for the infection.

Prior to initiating treatment, appropriate specimens for laboratory testing (KOH preparation, fungal culture, or nail biopsy) should be obtained to confirm the diagnosis.

Griseofulvin is noteffective in the following:

Griseofulvin is contraindicated in patients with porphyria or hepatocellular failure, and in individuals with a history of hypersensitivity to Griseofulvin.

Griseofulvin may cause fetal harm when administered to a pregnant woman. Two published cases of conjoined twins have been reported in patients taking Griseofulvin during the first trimester of pregnancy, therefore, Griseofulvin is contraindicated in women who are or may become pregnant during treatment. Women taking estrogen-containing oral contraceptives may be at increased risk of becoming pregnant while on Griseofulvin (see also PRECAUTIONS, Drug Interactions). If this drug is used during pregnancy, or if the patient becomes pregnant while taking this drug, the patient should be apprised of the potential hazard to the fetus. Although no direct causal relationship has been established, spontaneous abortion has been reported rarely coincident with the use of Griseofulvin. Note: The Maximum Recommended Human Dose (MRHD) was set at 500 mg/day for the multiple of human exposure calculations performed in this label. If higher doses than 500 mg/day were used clinically, then the multiple of human exposure would be correspondingly reduced for that dose. For example, if a 1000 mg/day dose was administered to an individual, then the multiple of human exposure would be reduced by a factor of 2.

Safety and efficacy of Griseofulvin for prophylaxis of fungal infections have not been established.

Elevations in AST, ALT, bilirubin, and jaundice have been reported with Griseofulvin use. These reactions may be serious and may result in hospitalization or death. Patients should be monitored for hepatic adverse events and discontinuation of Griseofulvin considered if warranted (see ADVERSE REACTIONS section).

Since Griseofulvin is derived from species of penicillin, the possibility of cross sensitivity with penicillin exists; however, known penicillin-sensitive patients have been treated without difficulty.

Since a photosensitivity reaction is occasionally associated with Griseofulvin therapy, patients should be warned to avoid exposure to intense or prolonged natural or artificial sunlight.

Griseofulvin decreases the activity of warfarin-type anticoagulants, so that patients receiving these drugs concomitantly may require dosage adjustment of the anticoagulant during and after Griseofulvin therapy.

Cyclosporine levels may be reduced when administered concomitantly with Griseofulvin, resulting in a decrease in the pharmacologic effects of cyclosporine.

Serum salicylate concentrations may be decreased when Griseofulvin is given concomitantly with salicylates.

In subacute toxicity studies, orally administered Griseofulvin produced hepatocellular necrosis in mice, but this has not been seen in other species. Chronic feeding of Griseofulvin, at levels ranging from 0.5 to 2.5% of the diet, resulted in the development of liver tumors in several strains of mice, particularly in males. Smaller particle sizes resulted in an enhanced effect. Lower oral-dosage levels have not been tested. Subcutaneous administration of relatively small doses of Griseofulvin once a week during the first three weeks of life has also been reported to induce hepatomata in mice. Thyroid tumors, mostly adenomas but some carcinomas, have been reported in male rats receiving Griseofulvin at levels of 2%, 1% and 0.2% of the diet, and in female rats receiving the two higher dose levels. Studies in other animal species were inadequate assessments of tumorigenicity.

Disturbances in porphyrin metabolism have been reported in Griseofulvin-treated laboratory animals. Griseofulvin has been reported to have a colchicine-like effect on mitosis and was cocarcinogenic with methylcholanthrene in cutaneous tumor induction in laboratory animals. Griseofulvin interferes with chromosomal distribution during cell division, causing aneuploidy in plant and mammalian cells. These effects have been demonstrated in vitro at concentrations that may be achieved in the serum with the recommended therapeutic dosage.

Suppression of spermatogenesis has been reported to occur in rats and sperm abnormalities have been observed in Griseofulvin treated mice, but these were not detected in man. Male patients should wait at least six months after completing Griseofulvin therapy before fathering a child.

It is not known if Griseofulvin is excreted in human milk. Because many drugs are excreted in human milk and because of the potential for tumorigenicity shown for Griseofulvin in animal studies (see PRECAUTIONS, Carcinogenesis, Mutagenesis, Impairment of Fertility), a decision should be made whether to discontinue nursing or to discontinue the drug, taking into account the importance of the drug to the mother.

There have been postmarketing reports of severe skin and hepatic adverse events associated with Griseofulvin use (see WARNINGS section).

When adverse reactions occur, they are most commonly of the hypersensitivity type, such as skin rashes, urticaria, and rarely, angioneurotic edema, and erythema multiforme. These may necessitate withdrawal of therapy and appropriate countermeasures. Peripheral neuropathy and paresthesias of the hands and feet have been reported and may be related to treatment duration. Most patients treated with Griseofulvin for less than six months experienced improvement or resolution of their neuropathy upon withdrawal of the Griseofulvin. Other side effects reported occasionally are oral thrush, nausea, vomiting, epigastric distress, diarrhea, headache, fatigue, dizziness, insomnia, mental confusion, and impairment of performance of routine activities.

There is limited experience on overdose with Griseofulvin. In case of overdosage, discontinue medication, treat symptomatically and institute supportive measures as required.

General measures in regard to hygiene should be observed to control sources of infection or reinfection. Concomitant use of appropriate topical agents is usually required, particularly in treatment of tinea pedis. In some forms of tinea pedis, yeasts and bacteria may be involved as well as dermatophytes. Griseofulvin will not eradicate these associated bacterial or yeast infections.

ADULTS: 0.5 g daily (125 mg q.i.d., 250 mg b.i.d., or 500 mg/day). Patients with less severe or 300 extensive infections may require less, whereas those with widespread lesions may require a starting dose of 0.75 g to 1 g/day. This may be reduced gradually to 0.5 g or less after a response has been noted. In all cases, the dosage should be individualized.

PEDIATRIC PATIENTS (older than 2 years): A dosage of 10 mg/kg daily is usually adequate (pediatric patients from 30 to 50 lb, 125 mg to 250 mg daily; pediatric patients over 50 lb, 250 mg to 500 mg daily, in divided doses). Dosage should be individualized, as with adults. Clinical relapse will occur if the medication is not continued until the infecting organism is eradicated.

How is Griseofulvin Supplied

PHARMACIST: Dispense in a tight, light-resistant container as defined in the USP, with a child-resistant closure as required.

This product is protected by a tamper-resistant seal around the neck opening. If the seal has been broken or is removed, do not use the product. Return the product to place of purchase.

Manufactured In India By: 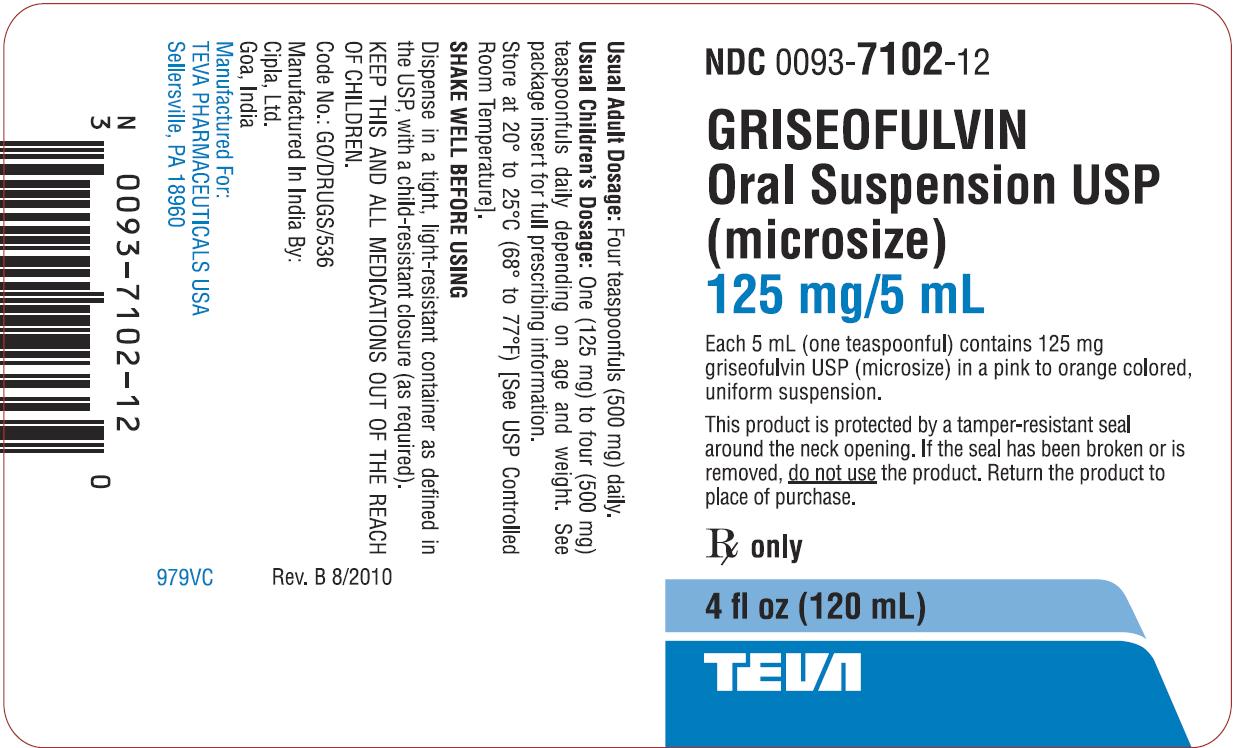 Each 5 mL (one teaspoonful) contains125 mg

Griseofulvin USP (microsize) in a pink to orange colored,

This product is protected by a tamper-resistant seal

around the neck opening. If the seal has been broken or is 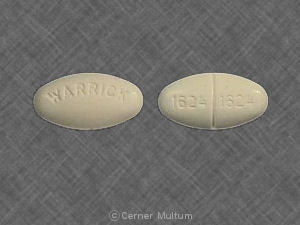