Gris-PEG® Tablets contain ultramicrosize crystals of griseofulvin, an antibiotic derived from a species of Penicillium. 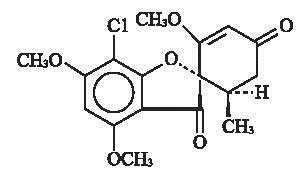 Griseofulvin is fungistatic with in vitro activity against various species of Microsporum, Epidermophyton and Trichophyton. It has no effect on bacteria or other genera of fungi.

Following oral administration, griseofulvin is deposited in the keratin precursor cells and has a greater affinity for diseased tissue. The drug is tightly bound to the new keratin which becomes highly resistant to fungal invasions.

Two cases of conjoined twins have been reported since 1977 in patients taking griseofulvin during the first trimester of pregnancy. Griseofulvin should not be prescribed to pregnant patients. If the patient becomes pregnant while taking this drug, the patient should be apprised of the potential hazard to the fetus.

This drug is contraindicated in patients with porphyria or hepatocellular failure and in individuals with a history of hypersensitivity to griseofulvin.

Elevations in AST, ALT, bilirubin, and jaundice have been reported with griseofulvin use. These reactions may be serious and may result in hospitalization or death. Patients should be monitored for hepatic adverse events and discontinuation of griseofulvin considered if warranted (see ADVERSE REACTIONS section).

Chronic feeding of griseofulvin, at levels ranging from 0.5%-2.5% of the diet resulted in the development of liver tumors in several strains of mice, particularly in males. Smaller particle sizes result in an enhanced effect. Lower oral dosage levels have not been tested. Subcutaneous administration of relatively small doses of griseofulvin once a week during the first three weeks of life has also been reported to induce hepatomata in mice. Thyroid tumors, mostly adenomas but some carcinomas, have been reported in male rats receiving griseofulvin at levels of 2.0%, 1.0% and 0.2% of the diet, and in female rats receiving the two higher dose levels. Although studies in other animal species have not yielded evidence of tumorigenicity, these studies were not of adequate design to form a basis for conclusion in this regard. In subacute toxicity studies, orally administered griseofulvin produced hepatocellular necrosis in mice, but this has not been seen in other species. Disturbances in porphyrin metabolism have been reported in griseofulvin-treated laboratory animals. Griseofulvin has been reported to have a colchicine-like effect on mitosis and cocarcinogenicity with methylcholanthrene in cutaneous tumor induction in laboratory animals.

Patients on prolonged therapy with any potent medication should be under close observation. Periodic monitoring of organ system function, including renal, hepatic and hematopoietic, should be done. Since griseofulvin is derived from species of Penicillium, the possibility of cross-sensitivity with penicillin exists; however, known penicillin-sensitive patients have been treated without difficulty. Since a photosensitivity reaction is occasionally associated with griseofulvin therapy, patients should be warned to avoid exposure to intense natural or artificial sunlight. Lupus erythematosus or lupus-like syndromes have been reported in patients receiving griseofulvin. Griseofulvin decreases the activity of warfarin-type anticoagulants so that patients receiving these drugs concomitantly may require dosage adjustment of the anticoagulant during and after griseofulvin therapy. Barbiturates usually depress griseofulvin activity and concomitant administration may require a dosage adjustment of the antifungal agent. There have been reports in the literature of possible interactions between griseofulvin and oral contraceptives. The effect of alcohol may be potentiated by griseofulvin, producing such effects as tachycardia and flush.

There have been post-marketing reports of severe skin and hepatic adverse events associated with griseofulvin use (see WARNINGSsection).

When adverse reactions occur, they are most commonly of the hypersensitivity type such as skin rashes, urticaria, erythema multiforme-like drug reactions, and rarely, angioneurotic edema, and may necessitate withdrawal of therapy and appropriate countermeasures. Paresthesia of the hands and feet have been reported after extended therapy. Other side effects reported occasionally are oral thrush, nausea, vomiting, epigastric distress, diarrhea, headache, fatigue, dizziness, insomnia, mental confusion, and impairment of performance of routine activities. Proteinuria and leukopenia have been reported rarely. Administration of the drug should be discontinued if granulocytopenia occurs. When rare, serious reactions occur with griseofulvin, they are usually associated with high dosages, long periods of therapy, or both.

Accurate diagnosis of infecting organism is essential. Identification should be made either by direct microscopic examination of a mounting of infected tissue in a solution of potassium hydroxide or by culture on an appropriate medium. Medication must be continued until the infecting organism is completely eradicated as indicated by appropriate clinical or laboratory examination. Representative treatment periods are tinea capitis, 4 to 6 weeks; tinea corporis, 2 to 4 weeks; tinea pedis, 4 to 8 weeks; tinea unguium-depending on rate of growth-fingernails, at least 4 months; toenails, at least 6 months.

General measures in regard to hygiene should be observed to control sources of infection or reinfection. Concomitant use of appropriate topical agents is usually required, particularly in treatment of tinea pedis. In some forms of athlete’s foot, yeasts and bacteria may be involved as well as fungi. Griseofulvin will not eradicate the bacterial or monilial infection.

Gris-PEG® tablets may be swallowed whole or crushed and sprinkled onto 1 tablespoonful of applesauce and swallowed immediately without chewing.

Adults: Daily administration of 375 mg (as a single dose or in divided doses) will give a satisfactory response in most patients with tinea corporis, tinea cruris, and tinea capitis. For those fungal infections more difficult to eradicate, such as tinea pedis and tinea unguium, a divided dose of 750 mg is recommended.

Pediatric Use: Approximately 7.3 mg per kg of body weight per day of ultramicrosize griseofulvin is an effective dose for most pediatric patients. On this basis, the following dosage schedule is suggested:
16-27 kg: 125 mg to 187.5 mg daily
over 27 kg: 187.5 mg to 375 mg daily

Children and infants 2 years of age and younger – dosage has not been established. Clinical experience with griseofulvin in children with tinea capitis indicates that a single daily dose is effective. Clinical relapse will occur if the medication is not continued until the infecting organism is eradicated.

How is Gris-PEG Supplied 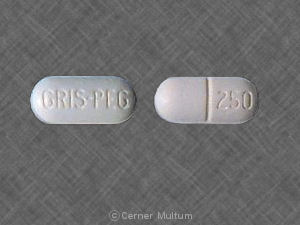