Indications and Usage for Cerianna Injection

CERIANNA is indicated for use with positron emission tomography (PET imaging) for characterization of estrogen receptor (ER) status of known or suspected metastatic lesions in patients with confirmed ER-positive breast cancer.

Tissue biopsy should be used to confirm recurrence of breast cancer and to verify ER status by pathology. CERIANNA is not useful for imaigng other receptors, such as human epidermal growth factor receptor 2 (HER2) and the progesterone receptor (PR)

CERIANNA is a radioactive drug. Only authorized persons qualified by training and experience should receive, use, and administer CERIANNA. Handle CERIANNA with appropriate safety measures to minimize radiation exposure during administration [see Warnings and Precautions ( 5.2)]. Use waterproof gloves and effective radiation shielding, including syringe shields, when preparing and handling CERIANNA.

Recommended Dosage
The recommended amount of radioactivity to be administered for PET imaging is 222 MBq (6 mCi), with a range of 111 MBq to 222 MBq (3 mCi to 6 mCi), administered as a single intravenous injection of 10 mL or less over 1 to 2 minutes.

Preparation and Administration
• For patient preparation instructions, see ( 2.3).
• Use aseptic technique and radiation shielding when withdrawing and administering CERIANNA.
• Visually inspect the radiopharmaceutical solution. Do not use if it contains particulate matter or if it is cloudy or discolored (CERIANNA is a clear, colorless solution).
• CERIANNA may be diluted with 0.9% Sodium Chloride Injection, USP.
• Assay the dose in a suitable dose calibrator prior to administration.

Post-Administration Instructions
• Follow the Cerianna Injection with an intravenous flush of 0.9% Sodium Chloride injection, USP.
• Dispose of any unused CERIANNA in compliance with applicable regulations

Patient Hydration and Voiding
Instruct patients to drink water to ensure adequate hydration prior to administration of CERIANNA and to continue drinking and voiding frequently during the first hours following administration to reduce radiation exposure.

Pregnancy Status
Assessment of pregnancy status is recommended in females of reproductive potential before administering CERIANNA.

Uptake of fluoroestradiol F 18 depends on ER density and function in tumors and physiologic tissue, including in liver, ovary, and uterus. Detection of ER-positive tumors should be based on comparison with tissue background outside of organs with high physiologic uptake and regions with high activity due to hepatobiliary and urinary excretion.

Radiation absorbed dose estimates are shown in Table 1 for organs and tissues of adults from intravenous administration of CERIANNA. The radiation effective dose resulting from administration of 222 MBq (6 mCi) of CERIANNA to an adult weighing 70 kg is estimated to be 4.9 mSv. Critical organs include the liver, gallbladder, and uterus. When PET/CT is performed, exposure to radiation will increase by an amount dependent on the settings used for the CT acquisition.

Injection: clear, colorless solution in a multiple-dose vial containing 148 MBq/mL to 3,700 MBq/mL (4 mCi/mL to 100 mCi/mL) of fluoroestradiol F 18 at end of synthesis.

Inadequate Tumor Characterization and Other ER-Positive Pathology
Breast cancer may be heterogeneous within patients and across time. CERIANNA images ER and is not useful for imaging other receptors such as HER2 and PR. The uptake of fluoroestradiol F 18 is not specific for breast cancer and may occur in a variety of ER-positive tumors that arise outside of the breast, including from the uterus and ovaries. Do not use CERIANNA in lieu of biopsy when biopsy is indicated in patients with recurrent or metastatic breast cancer.

The safety of CERIANNA was evaluated from published clinical studies of 1207 patients with breast cancer receiving at least one fluoroestradiol F 18 administration. The following adverse reactions occurred at a rate < 1%:
• General disorders: injection-site pain
• Neurological and gastrointestinal disorders: dysgeusia

Certain classes of systemic endocrine therapies, including ER modulators and ER down-regulators, block ER, reduce the uptake of fluoroestradiol F 18, and may reduce detection of ER-positive lesions after administration of CERIANNA. Drugs from these classes such as tamoxifen and fulvestrant may block ER for up to 8 and 28 weeks, respectively. Do not delay indicated therapy in order to administer CERIANNA. Administer CERIANNA prior to starting systemic endocrine therapies that block ER [see Dosage and Administration ( 2.3)].

Risk SummaryAll radiopharmaceuticals, including CERIANNA, have the potential to cause fetal harm depending on the fetal stage of development and the magnitude of radiation dose. Advise a pregnant woman of the potential risks of fetal exposure to radiation from administration of CERIANNA.

There are no available data on CERIANNA use in pregnant women. No animal reproduction studies using fluoroestradiol F 18 have been conducted to evaluate its effect on female reproduction and embryo-fetal development.

There are no data on the presence of fluoroestradiol F 18 in human milk, or its effects on the breastfed infant or milk production. Lactation studies have not been conducted in animals. Advise a lactating woman to avoid breastfeeding for 4 hours after CERIANNA administration in order to minimize radiation exposure to a breastfed infant.

The safety and effectiveness of CERIANNA in pediatric patients have not been established.

Clinical studies of fluoroestradiol F 18 injection did not reveal any difference in pharmacokinetics or biodistribution in patients aged 65 and over. 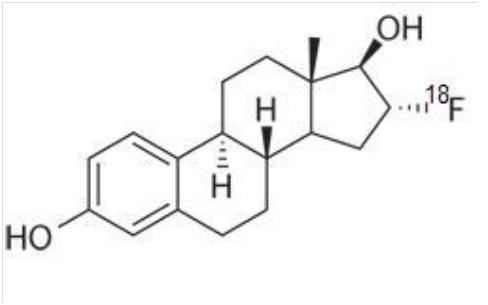 CERIANNA is radiolabeled with F 18, a cyclotron produced radionuclide that decays by positron emission to stable oxygen 18 with a half-life of 109.8 minutes. The principal photons useful for diagnostic imaging are the coincident pair of 511 keV gamma photons, resulting from the interaction of the emitted positron with an electron (Table 2).

The point source air-kerma coefficient for F 18 is 3.75 x 10 -17 Gy m 2/(Bq s). The first half-value thickness of lead (Pb) for F 18 gamma rays is approximately 6 mm. The relative reduction of radiation emitted by F 18 that results from various thicknesses of lead shielding is shown in Table 3. The use of 8 cm of Pb will decrease the radiation transmission (i.e., exposure) by a factor of about 10,000.

Excretion
Elimination is by biliary and urinary excretion.

Carcinogenesis
No long-term studies in animals were performed to evaluate the carcinogenic potential of CERIANNA.

Mutagenesis
Fluoroestradiol was evaluated by in vitro bacterial reverse mutation assay (Ames test) and in vitro L5178Y/TK+/- mouse lymphoma mutagenesis assay. Fluoroestradiol was negative for genotoxicity by Ames test at up to 1.25 μg per plate for 5 tester strains (Salmonella typhimurium tester strains TA98, TA100, TA1535 and TA1537 and Escherichia Coli tester strain WP2 uvrA) in the presence or absence of S9 metabolic activation. Fluoroestradiol was negative for genotoxicity by L5178Y/TK+/- mouse lymphoma mutagenesis assay at up to 8 ng/mL in the absence or presence of S9 metabolic activation.

Potential in vivo genotoxicity of fluoroestradiol was evaluated in a rat micronucleus assay. In this assay, fluoroestradiol did not increase the number of micronucleated polychromatic erythrocytes (MN-PCEs) at 51 μg/kg/day, when given for 14 consecutive days. However, CERIANNA has the potential to be mutagenic because of the F 18 radioisotope.

Impairment of Fertility
No studies in animals have been performed to evaluate potential impairment of fertility in males or females.

The effectiveness of CERIANNA for detecting ER-positive non-primary breast cancer lesions was evaluated based on published study reports of fluoroestradiol F 18. Study 1 (NCT01986569) enrolled 90 women (median age 55 years, 39% premenopausal) with histologically confirmed invasive breast cancer. The patients had first known or suspected recurrence of treated breast cancer or stage IV metastatic breast cancer. Recent biopsy of lesions outside of bone and areas with high physiologic fluoroestradiol F 18 uptake was also required [see Dosage and Administration ( 2.5)]. Patients concurrently using estrogen receptor modulators or fulvestrant discontinued them 60 days prior to fluoroestradiol F 18 administration. Concurrent use of aromatase inhibitors was permitted. Three image readers were blinded to all clinical information, except for the location of the largest biopsied lesion, for which pathologists independently provided an Allred score (0 to 8). The image readers scored the intensity of FES uptake on a three-point scale relative to normal biodistribution as either “decreased,” “equivocal,” or “increased” (1 to 3).

CERIANNA is supplied in a 50 mL multiple-dose glass vial (NDC# 72874-001-01) containing a clear, colorless injection solution at a strength of 148 MBq/mL to 3,700 MBq/mL (4 mCi/mL to 100 mCi/mL) fluoroestradiol F 18 at the end of synthesis. Each vial contains multiple doses and is enclosed in a shield container to minimize external radiation exposure.

Store CERIANNA at controlled room temperature (USP) 20°C to 25°C (68°F to 77°F). Store CERIANNA upright in the original container with radiation shielding. The expiration date and time are provided on the container label. Use CERIANNA within 12 hours from the time of the end of synthesis.

This preparation is approved for use by persons under license by the Nuclear Regulatory Commission or the relevant regulatory authority of an Agreement State.

Radiation Risks
Advise patients of the radiation risks of CERIANNA [see Warnings and Precautions (5.2)]. Instruct patients to drink water to ensure adequate hydration prior to administration of CERIANNA and to continue drinking and voiding frequently during the first hours following administration to reduce radiation exposure [see Dosage and Administration ( 2.3)].

Pregnancy
Advise a pregnant woman of the potential risks of fetal exposure to radiation doses with CERIANNA [see Use in Specific Populations ( 8.1)].

Lactation
Advise a lactating woman to avoid breastfeeding for 4 hours after CERIANNA administration in order to minimize radiation exposure to a breastfed infant [see Use in Specific Populations ( 8.2)]. 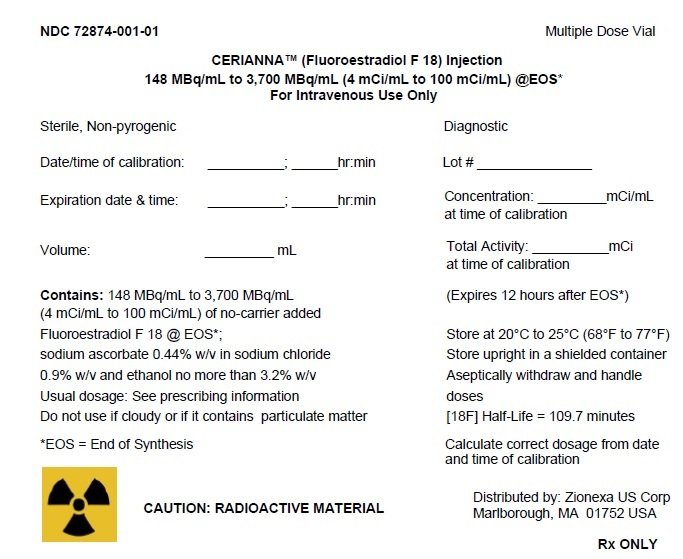