Allopurinol is a xanthine oxidase inhibitor. The chemical name for allopurinol sodium is 1, 5-dihydro-4H-pyrazolo [3,4-d] pyrimidin-4-one monosodium salt. It is a white amorphous mass with a molecular weight of 158.09 and molecular formula C5H3N4NaO. The structural formula is:

The pKa of allopurinol sodium is 9.31


Allopurinol acts on purine catabolism without disrupting the biosynthesis of purines. It reduces the production of uric acid by inhibiting the biochemical reactions immediately preceding its formation. The degree of this decrease is dose dependent.

Reutilization of both hypoxanthine and xanthine for nucleotide and nucleic acid synthesis is markedly enhanced when their oxidations are inhibited by allopurinol and oxypurinol. This reutilization does not disrupt normal nucleic acid anabolism, however, because feedback inhibition is an integral part of purine biosynthesis. As a result of xanthine oxidase inhibition, the serum concentration of hypoxanthine plus xanthine in patients receiving allopurinol for treatment of hyperuricemia is usually in the range of 0.3 to 0.4 mg/dL compared to a normal level of approximately 0.15 mg/dL. A maximum of 0.9 mg/dL of these oxypurines has been reported when the serum urate was lowered to less than 2 mg/dL by high doses of allopurinol. These values are far below the saturation levels, at which point their precipitation would be expected to occur (above 7 mg/dL).

The renal clearance of hypoxanthine and xanthine is at least 10 times greater than that of uric acid. The increased xanthine and hypoxanthine in the urine have not been accompanied by problems of nephrolithiasis. There are isolated case reports of xanthine crystalluria in patients who were treated with oral allopurinol.

Clinical Trials: A compassionate plea trial was conducted from 1977 through 1989 in which 718 evaluable patients with malignancies requiring treatment with cytotoxic chemotherapy, but who were unable to ingest or retain oral medication, received i.v. Allopurinol for Injection in the U.S. Of these patients, 411 had established hyperuricemia and 307 had normal serum urate levels at the time that treatment was initiated. Normal serum uric acid levels were achieved in 68% (reduction of serum uric acid was documented in 93%) of the former, and were maintained throughout chemotherapy in 97% of the latter. Because of the study design, it was not possible to assess the impact of the treatment upon the clinical outcome of the patient groups.

Indications and Usage for Allopurinol Injection

Allopurinol for Injection is indicated for the management of patients with leukemia, lymphoma, and solid tumor malignancies who are receiving cancer therapy which causes elevations of serum and urinary uric acid levels and who cannot tolerate oral therapy.

Patients who have developed a severe reaction to allopurinol should not be restarted on the drug.

DISCONTINUE ALLOPURINOL AT THE FIRST APPEARANCE OF SKIN RASH OR OTHER SIGNS WHICH MAY INDICATE A HYPERSENSITIVITY REACTION. Serious and sometimes fatal dermatologic reactions, including toxic epidermal necrolysis (TEN), Stevens-Johnson syndrome (SJS), and drug reaction with eosinophilia and systemic symptoms (DRESS) have been reported in patients taking allopurinol. These reactions occur in approximately 5 in 10,000 (0.05%) patients taking allopurinol. Other serious hypersensitivity reactions that have been reported include exfoliative, urticarial and purpuric lesions; generalized vasculitis; and irreversible hepatotoxicity.

The occurrence of hypersensitivity reactions may be increased in patients with renal impairment, especially in patients who are receiving thiazide diuretics. Reduce the dose of Allopurinol in patients with impaired renal function (see DOSAGE AND ADMINISTRATION: Impaired Renal Function).

A few cases of reversible clinical hepatotoxicity have been noted in patients taking oral allopurinol, and in some patients asymptomatic rises in serum alkaline phosphatase or serum transaminase have been observed. If anorexia, weight loss, or pruritus develop in patients on allopurinol, evaluation of liver function should be part of their diagnostic workup. In patients with pre-existing liver disease, periodic liver function tests are recommended during the early stages of therapy.

Due to the occasional occurrence of drowsiness, patients should be alerted to the need for due precaution when engaging in activities where alertness is mandatory.

A fluid intake sufficient to yield a daily urinary output of at least two liters in adults and the maintenance of a neutral or, preferably, slightly alkaline urine are desirable to (1) avoid the theoretical possibility of formation of xanthine calculi under the influence of allopurinol therapy and (2) help prevent renal precipitation of urates in patients receiving concomitant uricosuric agents.

A few patients with pre-existing renal disease or poor urate clearance have shown a rise in BUN during allopurinol administration, although a decrease in BUN has also been observed. In patients with hyperuricemia due to malignancy, the vast majority of changes in renal function are attributable to the underlying malignancy rather than to therapy with allopurinol. Concurrent conditions such as multiple myeloma and congestive myocardial disease were present among those patients whose renal function deteriorated after allopurinol was begun. Renal failure is rarely associated with hypersensitivity reactions to allopurinol.

Bone marrow suppression has been reported in patients receiving allopurinol; however, most of these patients were receiving concomitant medications with the known potential to cause such an effect. The suppression has occurred from as early as 6 weeks to as long as 6 years after the initiation of allopurinol therapy.

In patients with pre-existing liver disease, periodic liver function tests are recommended during the early stages of therapy (see WARNINGS).


Allopurinol and its primary active metabolite, oxypurinol, are eliminated by the kidneys; therefore, changes in renal function have a profound effect on dosage. In patients with decreased renal function, or who have concurrent illnesses which can affect renal function such as hypertension and diabetes mellitus, periodic laboratory parameters of renal function, particularly BUN and serum creatinine or creatinine clearance, should be performed and the patient's allopurinol dosage reassessed.

The prothrombin time should be reassessed periodically in the patients receiving dicumarol who are given allopurinol.

The following drug interactions were observed in some patients undergoing treatment with oral allopurinol. Although the pattern of use for oral allopurinol includes longer term therapy, particularly for gout and renal calculi, the experience gained may be relevant.


Dicumarol: It has been reported that allopurinol prolongs the half-life of the anticoagulant, dicumarol. Consequently, prothrombin time should be reassessed periodically in patients receiving both drugs. The clinical basis of this drug interaction has not been established.

Ampicillin/Amoxicillin: An increase in the frequency of skin rash has been reported among patients receiving ampicillin or amoxicillin concurrently with allopurinol compared to patients who are not receiving both drugs. The cause of this reaction has not been established.

Cytotoxic Agents: Enhanced bone marrow suppression by cyclophosphamide and other cytotoxic agents has been reported among patients with neoplastic disease, except leukemia, in the presence of allopurinol. However, in a well-controlled study of patients with lymphoma on combination therapy, allopurinol did not increase the marrow toxicity of patients treated with cyclophosphamide, doxorubicin, bleomycin, procarbazine, and/or mechlorethamine.

Allopurinol is not known to alter the accuracy of laboratory tests.

CARCINOGENESIS, MUTAGENESIS and IMPAIRMENT OF FERTILITY


Carcinogenesis: Allopurinol was administered at doses up to 20 mg/kg/day to mice and rats for the majority of their life span. No evidence of carcinogenicity was seen in either mice or rats (at doses about 1/6 or 1/3 the recommended human dose on a mg/m2 basis, respectively).


Mutagenesis: Allopurinol administered intravenously to rats (50 mg/kg) was not incorporated into rapidly replicating intestinal DNA. No evidence of clastogenicity was observed in an in vivo micronucleus test in rats, or in lymphocytes taken from patients treated with allopurinol (mean duration of treatment 40 months), or in an in vitro assay with human lymphocytes.

Impairment of Fertility: Allopurinol oral doses of 20 mg/kg/day had no effect on male or female fertility in rats or rabbits (about 1/3 or 1/2 the human dose on a mg/m2 basis, respectively).

Teratogenic Effects: There was no evidence of fetotoxicity or teratogenicity in rats or rabbits treated during the period of organogenesis with oral allopurinol at doses up to 200 mg/kg/day and up to 100 mg/kg/day, respectively (about three times the human dose on a mg/m2 basis). However, there is a published report in pregnant mice that single intraperitoneal doses of 50 or 100 mg/kg (about 1/3 or 3/4 the human dose on a mg/m2 basis) of allopurinol on gestation days 10 or 13 produced significant increases in fetal deaths and teratogenic effects (cleft palate, harelip, and digital defects). It is uncertain whether these findings represented a fetal effect or an effect secondary to maternal toxicity. There are, however, no adequate or well-controlled studies in pregnant women. Because animal reproduction studies are not always predictive of human response, this drug should be used during pregnancy only if the potential benefit justifies the potential risk to the fetus.

Allopurinol and oxypurinol have been found in the milk of a mother who was receiving allopurinol. Since the effect of allopurinol on the nursing infant is unknown, caution should be exercised when allopurinol is administered to a nursing woman.

Clinical data are available on approximately 200 pediatric patients treated with Allopurinol for Injection. The efficacy and safety profile observed in this patient population were similar to that observed in adults (see INDICATIONS and DOSAGE AND ADMINISTRATION).

Clinical studies of Allopurinol for Injection did not include sufficient numbers of patients aged 65 and over to determine whether they respond differently than younger patients. Other reported clinical experience has not identified differences in responses between the elderly and younger patients. In general, dose selection for an elderly patient should be cautious, usually starting at the low end of the dosing range, reflecting the greater frequency of decreased hepatic, renal, or cardiac function, and of concomitant disease or other drug therapy.

A listing of the adverse reactions regardless of causality reported from clinical trials follows:


Massive overdosing or acute poisoning by Allopurinol for Injection has not been reported.


Both allopurinol and oxypurinol are dialyzable; however, the usefulness of hemodialysis or peritoneal dialysis in the management of an overdose of Allopurinol for Injection is unknown.

Hydration: A fluid intake sufficient to yield a daily urinary output of at least two liters in adults and the maintenance of a neutral or, preferably, slightly alkaline urine are desirable.


Impaired Renal Function: The dose of Allopurinol for Injection should be reduced in patients with impaired renal function to avoid accumulation of allopurinol and its metabolites:


Administration: In both adults and children, the daily dose can be given as single infusion or in equally divided infusions at 6-, 8-, or 12- hour intervals at the recommended final concentration of not greater than 6 mg/mL (see Preparation of Solution). The rate of infusion depends on the volume of infusate. Whenever possible, therapy with Allopurinol for Injection should be initiated 24 to 48 hours before the start of chemotherapy known to cause tumor cell lysis (including adrenocorticosteroids).

Preparation of Solution: Allopurinol for Injection must be reconstituted and diluted. The contents of each 30 mL vial should be dissolved with 25 mL of Sterile Water for Injection. The reconstituted solution contains allopurinol at a concentration of 20 mg/mL. Reconstitution yields a clear, almost colorless solution with no more than a slight opalescence. This concentrated solution has a pH of 11.1 to 11.8. It should be diluted to the desired concentration with 0.9% Sodium Chloride Injection or 5% Dextrose for Injection. Sodium bicarbonate-containing solutions should not be used. A final concentration of no greater than 6 mg/mL is recommended. The solution should be stored at 20º to 25ºC (68º to 77ºF) and administration should begin within 10 hours after reconstitution. Do not refrigerate the reconstituted and/or diluted product. Discard unused portion.


The following table lists drugs that are physically incompatible in solution with Allopurinol for Injection.

How is Allopurinol Injection Supplied 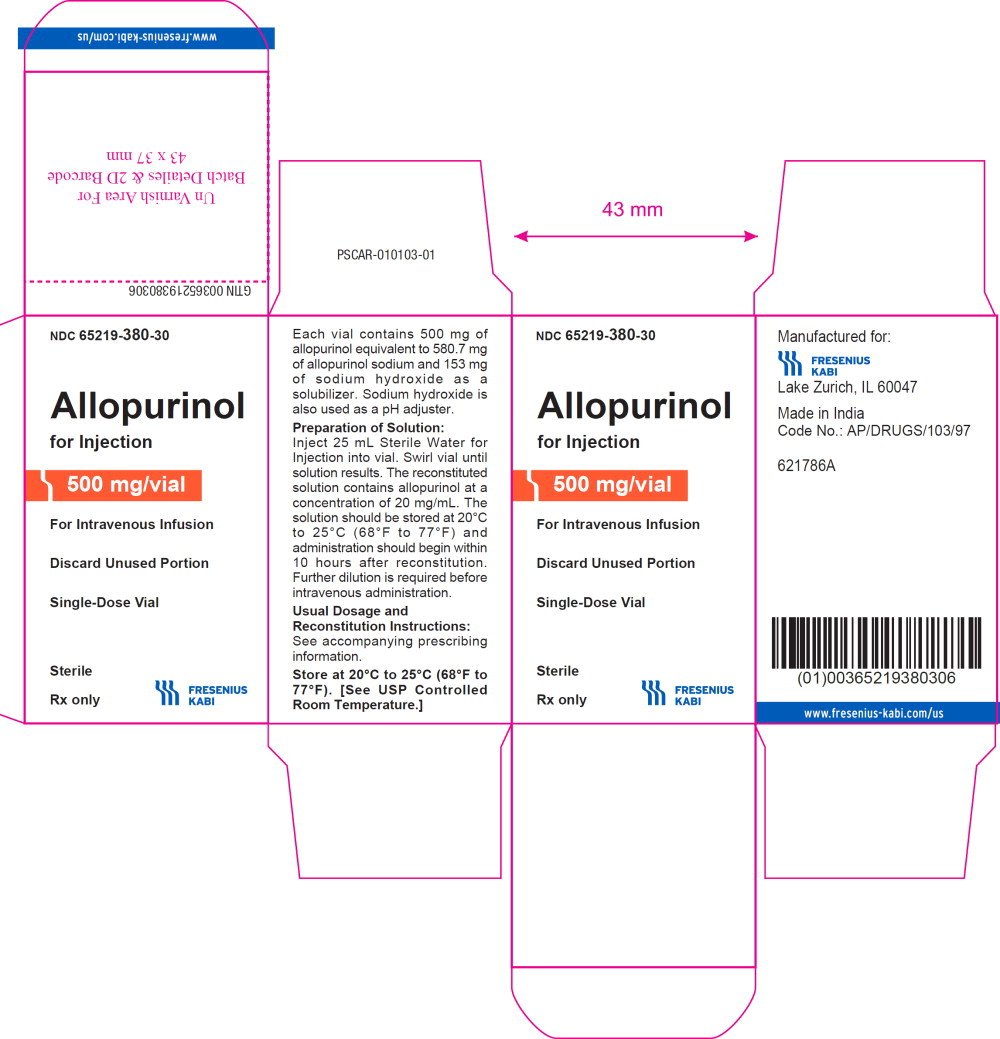