Addison's disease, also called adrenal insufficiency, is an uncommon disorder that occurs when your body doesn't produce enough of certain hormones. In Addison's disease, your adrenal glands, located just above your kidneys, produce too little cortisol and, often, too little aldosterone.

Addison's disease occurs in all age groups and both sexes, and can be life-threatening. Treatment involves taking hormones to replace those that are missing.

Addison's disease symptoms usually develop slowly, often over several months. Often, the disease progresses so slowly that symptoms are ignored until a stress, such as illness or injury, occurs and makes symptoms worse. Signs and symptoms may include:

Sometimes the signs and symptoms of Addison's disease may appear suddenly. Acute adrenal failure (addisonian crisis) can lead to life-threatening shock. Seek emergency medical treatment if you experience the following signs and symptoms:

In an addisonian crisis you will also have:

See your doctor if you have common signs and symptoms of Addison's disease, such as:

Addison's disease is caused by damage to your adrenal glands, resulting in not enough of the hormone cortisol and, often, not enough aldosterone as well. Your adrenal glands are part of your endocrine system. They produce hormones that give instructions to virtually every organ and tissue in your body.

When the cortex is damaged and doesn't produce enough adrenocortical hormones, the condition is called primary adrenal insufficiency. This is most commonly the result of the body attacking itself (autoimmune disease). For unknown reasons, your immune system views the adrenal cortex as foreign, something to attack and destroy. People with Addison's disease are more likely than others to have another autoimmune disease as well.

Other causes of adrenal gland failure may include:

A temporary cause of secondary adrenal insufficiency occurs when people who take corticosteroids (for example, prednisone) to treat chronic conditions, such as asthma or arthritis, stop taking the corticosteroids all at once rather than tapering off. 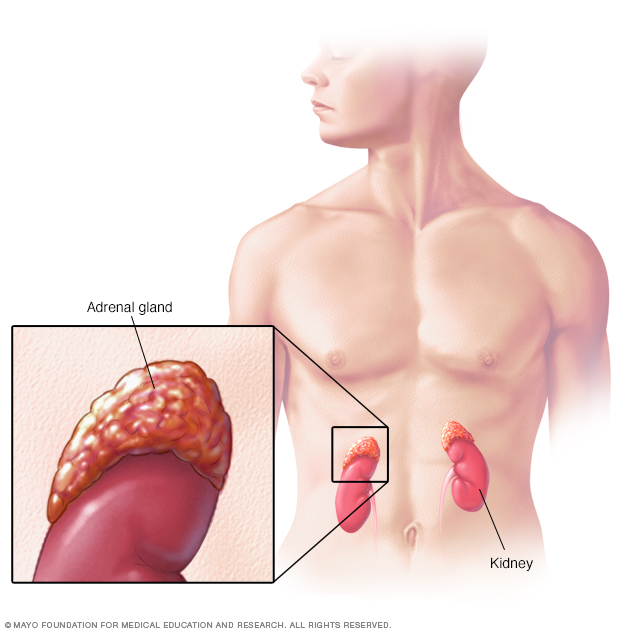 Perched on top of each of your kidneys, your adrenal glands produce hormones that help regulate your metabolism, immune system, blood pressure and other essential functions. Although small, these glands dictate much of what happens in your body.

If you have untreated Addison's disease, you may develop an addisonian crisis as a result of physical stress, such as an injury, infection or illness. Normally, the adrenal glands produce two to three times the usual amount of cortisol in response to physical stress. With adrenal insufficiency, the inability to increase cortisol production with stress can lead to an addisonian crisis.

Addison's disease can't be prevented, but there are steps you can take to avoid an addisonian crisis:

Some people with Addison's disease worry about serious side effects from hydrocortisone or prednisone because they know these occur in people who take these steroids for other reasons.

However, if you have Addison's disease, the adverse effects of high-dose glucocorticoids should not occur, since the dose you are prescribed is replacing the amount that is missing. Make sure to follow up with your doctor on a regular basis to make sure your dose is not too high.

Your doctor will talk to you first about your medical history and your signs and symptoms. You may undergo some of the following tests:

All treatment for Addison's disease involves medication. You will be given hormone replacement therapy to correct the levels of steroid hormones your body isn't producing. Some options for treatment include oral corticosteroids such as:

You will need to get plenty of salt (sodium) in your diet, especially during heavy exercise, when the weather is hot or if you have gastrointestinal upsets, such as diarrhea.

Your doctor will also suggest a temporary increase in your medication dosage if your body is stressed, such as from an operation, an infection or a minor illness. If you're ill with vomiting and can't keep down oral medications, you may need injections of corticosteroids.

Other treatment recommendations include:

Treatment for an addisonian crisis, which is a medical emergency, typically includes intravenous injections of:

Researchers are working to develop delayed-release corticosteroids, which act more like the human body. They are also working on pumps implanted under the skin that can deliver steroids in more-accurate doses.

Support groups are available through the National Adrenal Diseases Foundation.

You're likely to start by seeing your family doctor or a general practitioner. However, when you call to set up an appointment, you may be referred to an endocrinologist.

Your time with your doctor is limited, so preparing a list of questions will help you make the most of your time together. List your questions from most important to least important in case time runs out. For Addison's disease, some basic questions to ask your doctor include:

In addition to the questions you've prepared to ask your doctor, don't hesitate to ask questions during your appointment.