Note: This document contains side effect information about nevirapine. Some dosage forms listed on this page may not apply to the brand name Viramune XR.

Common side effects of Viramune XR include: nausea and skin rash. Other side effects include: severe dermatological reaction, abnormal hepatic function tests, fever, and headache. Continue reading for a comprehensive list of adverse effects.

Severe, life-threatening, in some cases fatal, hepatotoxicity and skin reactions (eg, Stevens-Johnson syndrome, toxic epidermal necrolysis, and hypersensitivity reactions characterized by rash, constitutional findings, and organ dysfunction) have been reported. Women, including pregnant women, or patients with higher CD4+ cell counts are at higher risk of hepatotoxicity. Permanently discontinue nevirapine following severe hepatic, skin, or hypersensitivity reactions. Check transaminase levels immediately for all patients who develop a rash during the first 18 weeks of treatment. Monitor patients intensively during the first 18 weeks of therapy with nevirapine to detect potentially life-threatening hepatotoxicity or skin reactions. Extra vigilance is warranted during the first 6 weeks of therapy, which is the period of greatest risk for adverse events. Strictly follow the 14-day lead-in period with immediate-release nevirapine 200 mg daily dosing.

Serious side effects of Viramune XR

Along with its needed effects, nevirapine (the active ingredient contained in Viramune XR) may cause some unwanted effects. Although not all of these side effects may occur, if they do occur they may need medical attention.

Check with your doctor immediately if any of the following side effects occur while taking nevirapine:

Get emergency help immediately if any of the following symptoms of overdose occur while taking nevirapine:

Other side effects of Viramune XR

Some side effects of nevirapine may occur that usually do not need medical attention. These side effects may go away during treatment as your body adjusts to the medicine. Also, your health care professional may be able to tell you about ways to prevent or reduce some of these side effects.

The most common clinical toxicity was rash. Rashes were usually mild to moderate, maculopapular erythematous cutaneous eruptions, with or without pruritus, located on the face, trunk, and extremities. Rash has occurred most often during the first 6 weeks of therapy. Utilization of the 14-day lead-in period with an immediate-release formulation has been shown to reduce the frequency of rash.

Severe and life-threatening skin reactions (including fatal cases) have been reported. These have included cases of Stevens-Johnson syndrome, toxic epidermal necrolysis, and hypersensitivity reactions characterized by rash, constitutional findings, and organ dysfunction.

Rash was reported in about half of patients with symptomatic hepatic side effects.[Ref]

Very common (10% or more): Rash (including maculopapular erythematous cutaneous eruptions, with or without pruritus)

Severe, life-threatening, and in some cases fatal, hepatotoxicity (including fulminant and cholestatic hepatitis, hepatic necrosis, and hepatic failure) has been reported. In some cases, patients presented with nonspecific prodromal signs/symptoms of hepatitis (including fatigue, malaise, anorexia, nausea, jaundice, liver tenderness/hepatomegaly, with or without initially abnormal transaminase levels). Some events (particularly those with rash and other symptoms) progressed to hepatic failure with transaminase elevation, with or without hyperbilirubinemia, hepatic encephalopathy, prolonged partial thromboplastin time, or eosinophilia. Patients without HIV using this drug for postexposure prophylaxis have reported serious hepatotoxicity, including hepatic failure.[Ref]

During 1 study, side effects of at least moderate intensity included headache; incidence was 4% with each formulation.[Ref]

During 1 study, side effects of at least moderate intensity included arthralgia; incidence was 2% with each formulation.[Ref]

24. Panel on Antiretroviral Therapy and Medical Management "Guidelines for the use of antiretroviral agents in pediatric HIV infection. https://aidsinfo.nih.gov/contentfiles/lvguidelines/pediatricguidelines.pdf" (2017): 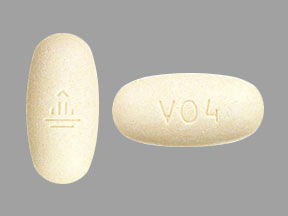