Indications and Usage for Vasopressin

Vasopressin Injection, USP is indicated to increase blood pressure in adults with vasodilatory shock who remain hypotensive despite fluids and catecholamines.

Inspect parenteral drug products for particulate matter and discoloration prior to use, whenever solution and container permit.

Dilute Vasopressin Injection, USP in normal saline (0.9% sodium chloride) or 5% dextrose in water (D5W) prior to use for intravenous administration. Discard unused diluted solution after 18 hours at room temperature or 24 hours under refrigeration.

In general, titrate to the lowest dose compatible with a clinically acceptable response.

The recommended starting dose is:

Tritate up by 0.005 units/minute at 10- to 15-minute intervals until the target blood pressure is reached. There are limited data for doses above 0.1 units/minute for post-cardiotomy shock and 0.07 units/minute for septic shock. Adverse reactions are expected to increase with higher doses.

Vasopressin Injection, USP is a clear, practically colorless solution for intravenous administration available as 20 units/mL in a single dose vial. To be used after dilution.

A decrease in cardiac index may be observed with the use of Vasopressin Injection, USP.

The following adverse reactions associated with the use of Vasopressin were identified in the literature. Because these reactions are reported voluntarily from a population of uncertain size, it is not possible to estimate their frequency reliably or to establish a causal relationship to drug exposure.

Use with catecholamines is expected to result in an additive effect on mean arterial blood pressure and other hemodynamic parameters. Hemodynamic monitoring is recommended; adjust the dose of Vasopressin as needed.

Use with indomethacin may prolong the effect of Vasopressin Injection, USP on cardiac index and systemic vascular resistance. Hemodynamic monitoring is recommended; adjust the dose of Vasopressin as needed [see Clinical Pharmacology (12.3)].

Use with ganglionic blocking agents may increase the effect of Vasopressin Injection, USP on mean arterial blood pressure. Hemodynamic monitoring is recommended; adjust the dose of Vasopressin as needed [seeClinical Pharmacology (12.3)].

Use with drugs suspected of causing diabetes insipidus (e.g., demeclocycline, lithium, foscarnet, clozapine) may decrease the pressor effect in addition to the antidiuretic effect of Vasopressin Injection, USP. Hemodynamic monitoring is recommended; adjust the dose of Vasopressin as needed.

Risk Summary
There are no available data on Vasopressin Injection, USP use in pregnant women to inform a drug associated risk of major birth defects, miscarriage, or adverse maternal or fetal outcomes. Animal reproduction studies have not been conducted with Vasopressin.

Clinical Considerations
Dose adjustments during pregnancy and the postpartum period: Because of increased clearance of Vasopressin in the second and third trimester, the dose of Vasopressin Injection, USP may need to be increased [see Dosage and Administration(2.2) and Clinical Pharmacology (12.3)].

There are no data on the presence of Vasopressin injection in either human or animal milk, the effects on the breastfed infant, or the effects on milk production.

Safety and effectiveness of Vasopressin Injection, USP in pediatric patients with vasodilatory shock have not been established.

Clinical studies of Vasopressin did not include sufficient numbers of subjects aged 65 and over to determine whether they respond differently from younger subjects. Other reported clinical experience has not identified differences in responses between the elderly and younger patients. In general, dose selection for an elderly patient should be cautious, usually starting at the low end of the dosing range, reflecting the greater frequency of decreased hepatic, renal, or cardiac function, and of concomitant disease or other drug therapy [see Warnings and Precautions (5), Adverse Reactions (6), and Clinical Pharmacology (12.3)].

Overdosage with Vasopressin Injection, USP can be expected to manifest as consequences of vasoconstriction of various vascular beds (peripheral, mesenteric, and coronary) and as hyponatremia. In addition, overdosage may lead less commonly to ventricular tachyarrhythmias (including Torsade de Pointes), rhabdomyolysis, and non-specific gastrointestinal symptoms.

Direct effects will resolve within minutes of withdrawal of treatment.

Vasopressin is a polypeptide hormone. Vasopressin Injection, USP is a sterile, aqueous solution of synthetic arginine Vasopressin for intravenous administration.

The 1 mL solution contains Vasopressin 20 units/mL, chlorobutanol, NF 0.5% as a preservative, and Water for Injection, USP adjusted with acetic acid to pH 3.4-3.6.

The chemical name of Vasopressin is Cyclo (1-6) L-Cysteinyl-L-Tyrosyl-L-Phenylalanyl-LGlutaminyl-L-Asparaginyl-L-Cysteinyl-L-Prolyl-L-Arginyl-L-Glycinamide. It is a white to off-white amorphous powder, freely soluble in water. The structural formula is:

One mg is equivalent to 530 units.

Vasopressin causes vasoconstriction by binding to V1 receptors on vascular smooth muscle coupled to the Gq/11-phospholipase C-phosphatidyl-inositol-triphosphate pathway, resulting in the release of intracellular calcium. In addition, Vasopressin stimulates antidiuresis via stimulation of V2 receptors which are coupled to adenyl cyclase.

At therapeutic doses exogenous Vasopressin elicits a vasoconstrictive effect in most vascular beds including the splanchnic, renal and cutaneous circulation. In addition, Vasopressin at pressor doses triggers contractions of smooth muscles in the gastrointestinal tract mediated by muscular V1-receptors and release of prolactin and ACTH via V3 receptors. At lower concentrations typical for the antidiuretic hormone Vasopressin inhibits water diuresis via renal V2 receptors. In addition, Vasopressin has been demonstrated to cause vasodilation in numerous vascular beds that are mediated by V2, V3, oxytocin and purinergic P2 receptors.

Distribution Vasopressin does not appear to bind plasma protein. The volume of distribution is 140 mL/kg.

Excretion
Vasopressin is predominantly metabolized and only about 6% of the dose is excreted unchanged into urine.

Halothane, morphine, fentanyl, alfentanyl and sufentanyl do not impact exposure to endogenous Vasopressin.

No formal carcinogenicity or fertility studies with Vasopressin have been conducted in animals. Vasopressin was found to be negative in the in vitro bacterial mutagenicity (Ames) test and the in vitro Chinese hamster ovary (CHO) cell chromosome aberration test. In mice, Vasopressin has been reported to have an effect on function and fertilizing ability of spermatozoa.

No toxicology studies were conducted with Vasopressin.

Increases in systolic and mean blood pressure following administration of Vasopressin were observed in 7 studies in septic shock and 8 in post-cardiotomy vasodilatory shock.

A carton of 10 single dose vials. Each vial contains Vasopressin 1 mL at 20 units/mL.

For Intravenous Infusion
Must be diluted prior to use 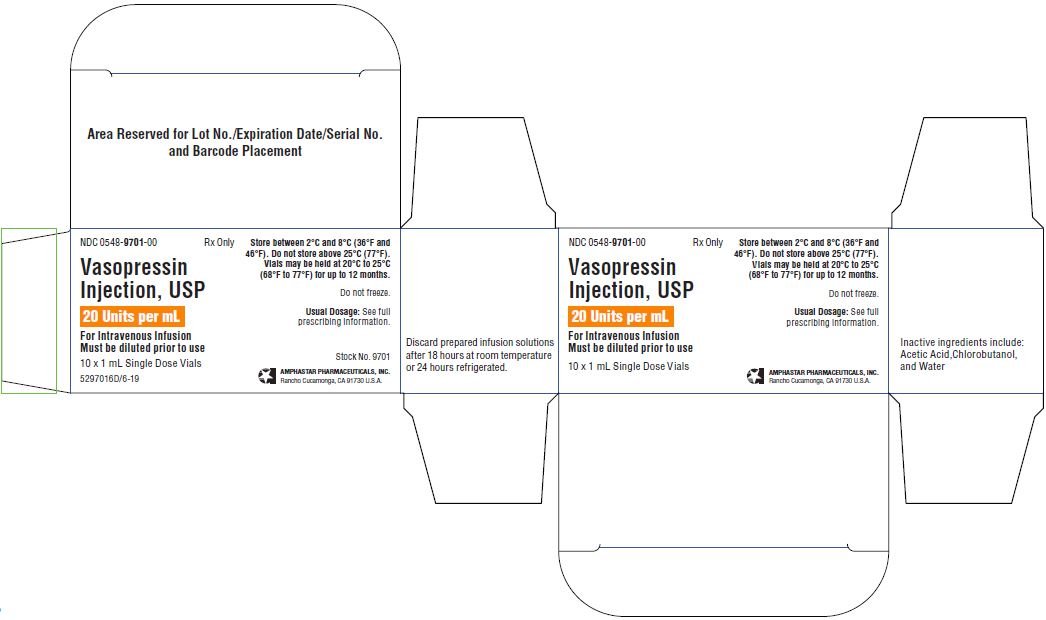