Per your order, we have compounded Thyrotropin-Releasing Hormone (TRH). The characteristics of this preparation are:

Chemically, TRH (protirelin) is identified as 5-oxo-L-prolyl-L-histidyl-L-proline amide. It is a synthetic tripeptide that is believed to be structurally identical to the naturally-occurring thyrotropin-releasing hormone produced by the hypothalamus. The CAS Registry Number is 24305-27-9. The structural formula is:

TRH is supplied as a solution of 1 mL in a 5 mL vial. Each vial contains 500 mcg protirelin, 1.8 mg Methylparaben, 0.2 mg Propylparaben, and 9.0 mg Sodium Chloride. TRH is intended for intravenous administration following dilution with 1 mL sterile water for injection.

Pharmacologically, TRH increases the release of the thyroid stimulating hormone (TSH) from the anterior pituitary. Prolactin release is also increased. It has recently been observed that approximately 65% of acromegalic patients tested respond with a rise in circulating growth hormone levels; the clinical significance is as yet not clear. Following intravenous administration, the mean plasma half-life of protirelin in normal subjects is approximately five minutes. TSH levels rise rapidly and reach a peak at 20 to 30 minutes. The decline in TSH levels takes place more slowly, approaching baseline levels after approximately three hours

TRH is indicated as an adjunctive agent in the diagnostic assessment of thyroid function. As an adjunct to other diagnostic procedures, testing with TRH (protirelin) may yield useful information in patients with pituitary or hypothalamic dysfunction.

TRH is indicated as an adjunct to evaluate the effectiveness of thyrotropin suppression with a particular dose of T4 in patients with nodular or diffuse goiter. A normal TSH baseline value and a minimal difference between the 30 minute and baseline response to TRH injection would indicate adequate suppression of the pituitary secretion of TSH.

Transient changes in blood pressure, either increases or decreases, frequently occur immediately following administration of TRH. Blood pressure should therefore be measured before TRH is administered and at frequent intervals during the first 15 minutes after its administration.

Increases in systolic pressure (usually less than 30 mm Hg) and/or increases in diastolic pressure (usually less than 20 mm Hg) have been observed more frequently than decreases in pressure. These changes have not ordinarily persisted for more than 15 minutes nor have they required therapy. More severe degrees of hypertension or hypotension with or without syncope have been reported in a few patients. To minimize the incidence and/or severity of hypotension, the patient should be supine before, during, and after TRH administration. If a clinically important change in blood pressure occurs, monitoring of blood pressure should be continued until it returns to base-line levels.

TRH should not be administered to patients in whom marked, rapid changes in blood pressure would be dangerous unless the potential benefit clearly outweighs the potential risk

Thyroid hormones reduce the TSH response to TRH. Accordingly, patients in whom TRH is to be used diagnostically should be taken off liothyronine (T3) approximately seven days prior to testing and should be taken off thyroid medications containing levothyroxine (T4), e.g., desiccated thyroid, thyroglobulin, or liotrix, at least 14 days before testing. Hormone therapy is NOT to be discontinued when the test is used to evaluate the effectiveness of thyroid suppression with a particular dose of T4 in patients with nodular or diffuse goiter, or for adjustment of thyroid hormone dosage given to patients with primary hypothyroidism.

Chronic administration of levodopa has been reported to inhibit the TSH response to TRH.

Side effects have been reported in about 50% of the patients tested with TRH. Generally, the side effects are moor, have occurred promptly, and have persisted for only a few minutes following injection.

Marked changes in blood pressure, including both hypertension and hypotension with or without syncope, have been reported in a small number of patients.

Breast enlargement and leakage in lactating women for up to two or three days.

Anxiety; sweating; tightness in the throat; pressure in the chest; tingling sensation; drowsiness; and allergic reactions.

Pituitary apoplexy requiring acute neurosurgical intervention has been reported infrequently for patients with pituitary macroadenomas following the acute administration of protirelin injection in the setting of combined anterior pituitary function testing in conjunction with LHRH and insulin.

TRH is intended for intravenous administration with the patient in the supine position. The drug is administered as a bolus over a period of 15 to 30 seconds, with the patient remaining supine until all scheduled post injection blood samples have been taken. Blood pressure should be measured before TRH is administered and at frequent intervals during the first 15 minutes thereafter (see WARNINGS). Have the patient urinate before injecting TRH.

Adults: 500 μg. Doses between 200 and 500 μg have been used. 500 μg is considered the optimum dose to give the maximum response in the greatest number of patients. Doses greater than 500 μg are unlikely to elicit a greater TSH response.

Infants and children up to 6 years: Experience is limited in this age group; doses of 7μg/kg have been administered.

One blood sample for TSH assay should be drawn immediately prior to the injection of TRH, and a second sample should be obtained 30 minutes after injection.

The TSH response to TRH is reduced by repetitive administration of the drug. Accordingly, if the TRH test is repeated, an interval of seven days before testing is recommended.

Elevated serum lipids may interfere with the TSH assay. Thus, fasting (except in patients with hypopituitarism) or a low-fat meal is recommended prior to the test.

Interpretation of the TSH response to TRH requires an understanding of thyroid-pituitary-hypothalamic physiology and knowledge of the clinical status of the individual patient. Because the TSH test results may vary with the laboratory, the physician should be familiar with the TSH assay method used and the normal range for the laboratory performing the assay. TSH response 30 minutes after TRH administration in normal subjects and in patients with hyperthyroidism and hypothyroidism are presented in Figure 2. The diagnoses were established prior to the administration of TRH on the basis of the clinical history, physical examination, and the results of other thyroid and/or pituitary function tests.

Among the normal euthyroid subjects, women and children were found to have higher levels of TSH at 30 minutes than men.

Among the patients with hyperthyroidism or primary (thyroidal), secondary (pituitary), or tertiary (hypothalamic) hypothyroidism, no significant differences in TSH levels by age or sex were found. 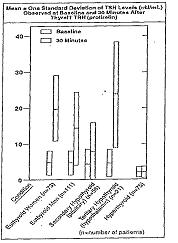 Normal: Baseline TSH levels of less than 10 microunits/mL (μU/mL) were observed in 97% of euthyroid normal subjects tested. Thirty minutes after TRH, the serum TSH increased by 2.0 mμU/mL or more in 95% of euthyroid subjects.

Hyperthyroidism: All hyperthyroid patients tested had baseline TSH levels of less than 10 μU/mL and a rise of less than 2 μU/pL 30 minutes after TRH.

Establishing the diagnosis of secondary or tertiary hypothyroidism requires a careful history and physical examination along with appropriate tests of anterior pituitary and/or target gland function. The TRH test should not be used as the only laboratory determinant for establishing these diagnoses.