Indications and Usage for Tepezza

Tepezza is indicated for the treatment of Thyroid Eye Disease.

Step 1: Calculate the dose (mg) and determine the number of vials needed for the 10 or 20 mg/kg dosage based on patient weight. Each Tepezza vial contains 500 mg of the teprotumumab antibody.

Step 2: Using appropriate aseptic technique, reconstitute each Tepezza vial with 10 mL of Sterile Water for Injection, USP. Ensure that the stream of diluent is not directed onto the lyophilized powder, which has a cake-like appearance. Do not shake, but gently swirl the solution by rotating the vial until the lyophilized powder is dissolved. The reconstituted solution has a volume of 10.5 mL. Withdraw 10.5 mL of reconstituted solution to obtain 500 mg. After reconstitution, the final concentration is 47.6 mg/mL.

Step 3: The reconstituted Tepezza solution must be further diluted in 0.9% Sodium Chloride Injection, USP prior to infusion. To maintain a constant volume in the infusion bag, a sterile syringe and needle should be used to remove the volume equivalent to the amount of the reconstituted Tepezza solution to be placed into the infusion bag. Discard the 0.9% Sodium Chloride, USP volume withdrawn.

Step 4: Withdraw the required volume from the reconstituted Tepezza vial(s) based on the patient's weight (in kg) and transfer into an intravenous bag containing 0.9% Sodium Chloride Solution, USP to prepare a diluted solution with a total volume of 100 mL (for less than 1800 mg dose) or 250 mL (for 1800 mg and greater dose). Mix diluted solution by gentle inversion. Do not shake.

The product does not contain any preservative. The combined storage time of reconstituted Tepezza solution in the vial and the diluted solution in the infusion bag containing 0.9% Sodium Chloride Injection, USP is a total of 4 hours at room temperature 20°C to 25°C (68°F to 77°F) or up to 48 hours under refrigerated conditions 2°C to 8°C (36°F to 46°F) protected from light. If refrigerated prior to administration, allow the diluted solution to reach room temperature prior to infusion.

Do not freeze the reconstituted or diluted solution.

Discard vial(s) and all unused contents.

No incompatibilities between Tepezza and polyethylene (PE), polyvinyl chloride (PVC), polyurethane (PUR) or polyolefin (PO) bags and intravenous administration sets have been observed.

Do not administer as an intravenous push or bolus. Tepezza should not be infused concomitantly with other agents.

For injection (intravenous infusion): 500 mg of teprotumumab as a white to off-white lyophilized powder in a single-dose vial for reconstitution and dilution.

Tepezza may cause an exacerbation of preexisting inflammatory bowel disease (IBD). Monitor patients with IBD for flare of disease. If IBD exacerbation is suspected, consider discontinuation of Tepezza.

Hyperglycemia or increased blood glucose may occur in patients treated with Tepezza. In clinical trials, 10% of patients (two thirds of whom had pre-existing diabetes or impaired glucose tolerance) experienced hyperglycemia. Hyperglycemic events should be controlled with medications for glycemic control, if necessary.

Monitor patients for elevated blood glucose and symptoms of hyperglycemia while on treatment with Tepezza. Patients with pre-existing diabetes should be under appropriate glycemic control before receiving Tepezza.

The safety of Tepezza was evaluated in two randomized, double-masked, placebo-controlled clinical studies (Study 1 [NCT:01868997] and Study 2 [NCT:03298867]) consisting of 170 patients with Thyroid Eye Disease (84 received Tepezza and 86 received placebo). Patients were treated with Tepezza (10 mg/kg for first infusion and 20 mg/kg for the remaining 7 infusions) or placebo given as an intravenous infusion every 3 weeks for a total of 8 infusions. The majority of patients completed 8 infusions (89% of Tepezza patients and 93% of placebo patients).

The most common adverse reactions (≥5%) that occurred at greater incidence in the Tepezza group than in the control group during the treatment period of Studies 1 and 2 are summarized in Table 1. In addition, menstrual disorders (amenorrhea, metrorrhagia, dysmenorrhea) were reported in approximately 23% (5 of 22 patients) of menstruating women treated with Tepezza compared to 4% (1 of 25 patients) treated with placebo in the clinical trials.

As with all therapeutic proteins, there is potential for immunogenicity. The detection of antibody formation is highly dependent on the sensitivity and specificity of the assay.

Based on findings in animals and its mechanism of action inhibiting insulin-like growth factor 1 receptor (IGF-1R), Tepezza may cause fetal harm when administered to a pregnant woman. Adequate and well-controlled studies with Tepezza have not been conducted in pregnant women. There are insufficient data with Tepezza use in pregnant women to inform any drug associated risks for adverse developmental outcomes. In utero teprotumumab exposure in cynomolgus monkeys dosed once weekly with teprotumumab throughout pregnancy resulted in external and skeletal abnormalities. Teprotumumab exposure may lead to an increase in fetal loss [see Data]. Therefore, Tepezza should not be used in pregnancy, and appropriate forms of contraception should be implemented prior to initiation, during treatment and for 6 months following the last dose of Tepezza. If the patient becomes pregnant during treatment, Tepezza should be discontinued and the patient advised of the potential risk to the fetus.

In an abridged pilot embryofetal development study, seven pregnant cynomolgus monkeys were dosed intravenously at one dose level of teprotumumab, 75 mg/kg (2.8-fold the maximum recommended human dose (MRHD) based on AUC) once weekly from gestation day 20 through the end of gestation. The incidence of abortion was higher for the teprotumumab treated group compared to the control group. Teprotumumab caused decreased fetal growth during pregnancy, decreased fetal size and weight at caesarean section, decreased placental weight and size, and decreased amniotic fluid volume. Multiple external and skeletal abnormalities were observed in each exposed fetus, including: misshapen cranium, closely set eyes, micrognathia, pointing and narrowing of the nose, and ossification abnormalities of skull bones, sternebrae, carpals, tarsals and teeth. The test dose, 75 mg/kg of teprotumumab, was the maternal no observed adverse effect level (NOAEL).

Based on mechanism of action inhibiting IGF-1R, postnatal exposure to teprotumumab may cause harm.

Based on its mechanism of action inhibiting IGF-1R, Tepezza may cause fetal harm when administered to a pregnant woman [see Use in Specific Populations (8.1)]. Advise females of reproductive potential to use effective contraception prior to initiation, during treatment with Tepezza and for 6 months after the last dose of Tepezza.

Safety and effectiveness have not been established in pediatric patients.

No information is available for patients who have received an overdosage.

Tepezza (teprotumumab-trbw) for injection is supplied as a sterile, preservative-free, white to off-white, lyophilized powder for intravenous infusion. Each single-dose vial contains 500 mg of teprotumumab-trbw, L-histidine (7.45 mg), L-histidine hydrochloride monohydrate (31.8 mg), polysorbate 20 (1 mg), and trehalose dihydrate (946 mg). After reconstitution with 10 mL of Sterile Water for Injection, USP, the final concentration is 47.6 mg/mL with a pH of 5.5.

Teprotumumab-trbw's mechanism of action in patients with Thyroid Eye Disease has not been fully characterized. Teprotumumab-trbw binds to IGF-1R and blocks its activation and signaling.

No formal pharmacodynamic studies have been conducted with teprotumumab-trbw.

The pharmacokinetics of teprotumumab-trbw was described by a two compartment population PK model based on data from 40 patients with Thyroid Eye Disease receiving an initial intravenous infusion of 10 mg/kg, followed by infusions of 20 mg/kg Tepezza every 3 weeks in one clinical trial. Following this regimen, the mean (± standard deviation) estimates for steady-state area under the concentration curve (AUC), peak (Cmax), and trough (Ctrough) concentrations of teprotumumab-trbw were 138 (± 34) mg∙hr/mL, 632 (± 139) mcg/mL, and 176 (± 56) mcg/mL, respectively.

Following the recommended Tepezza dosing regimen, the population PK estimated mean (± standard deviation) for the clearance of teprotumumab-trbw was 0.27 (± 0.08) L/day and for the elimination half-life was 20 (± 5) days.

No studies evaluating the drug interaction potential of Tepezza have been conducted.

The carcinogenic potential of Tepezza has not been evaluated in long-term animal studies.

The genotoxic potential of Tepezza has not been evaluated.

Fertility studies have not been performed with Tepezza.

Tepezza was evaluated in 2 randomized, double-masked, placebo-controlled studies in 171 patients with Thyroid Eye Disease: Study 1 (NCT01868997) and Study 2 (NCT03298867). Patients were randomized to receive Tepezza or placebo in a 1:1 ratio. Patients were given intravenous infusions (10 mg/kg for first infusion and 20 mg/kg for the remaining 7 infusions) every 3 weeks for a total of 8 infusions. Patients had a clinical diagnosis of Thyroid Eye Disease with symptoms and were euthyroid or had thyroxine and free triiodothyronine levels less than 50% above or below normal limits. Prior surgical treatment for Thyroid Eye Disease was not permitted. Proptosis ranged from 16 to 33 mm and 125 patients (73%) had diplopia at baseline.

The proptosis responder rate at week 24 was defined as the percentage of patients with ≥2 mm reduction in proptosis in the study eye from baseline, without deterioration in the non-study eye (≥2 mm increase) in proptosis. Additional evaluations included signs and symptoms of Thyroid Eye Disease including pain, gaze evoked orbital pain, swelling, eyelid erythema, redness, chemosis, inflammation, clinical activity score and assessments of functional vision and patient appearance. Results for proptosis are found in Table 2.

In Study 2, improvement of proptosis as measured by mean change from Baseline was observed as early as 6 weeks and continued to improve through week 24 as shown in Figure 1. Similar results were seen in Study 1.

Figure 1. Change from Baseline in Proptosis over 24 Weeks in Study 2 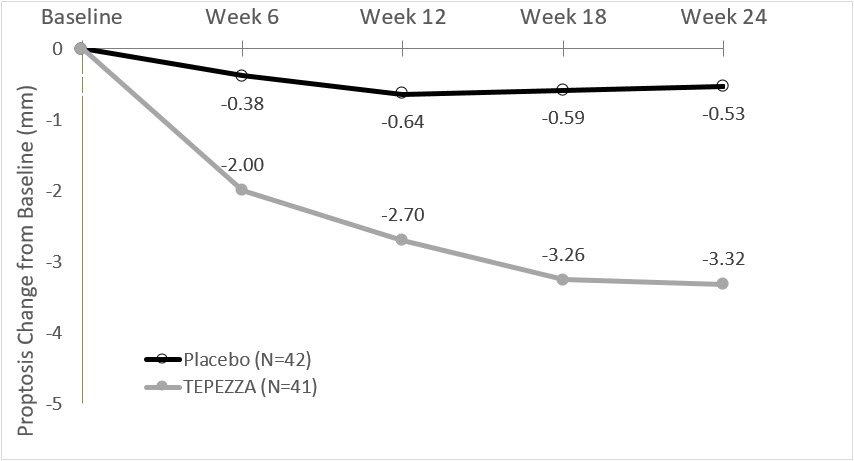 Diplopia (double vision) was evaluated in a subgroup of patients that had diplopia at baseline in Study 1 and 2. Results are shown in Table 3.

Examination of age and gender subgroups did not identify differences in response to Tepezza among these subgroups. Reduction in proptosis was similar between smokers and non-smokers in both studies.

Tepezza (teprotumumab-trbw) for injection is a sterile, preservative-free, white to off-white lyophilized powder available as follows:

For Intravenous Infusion Only
Reconstitute and Further Dilute Prior to Use 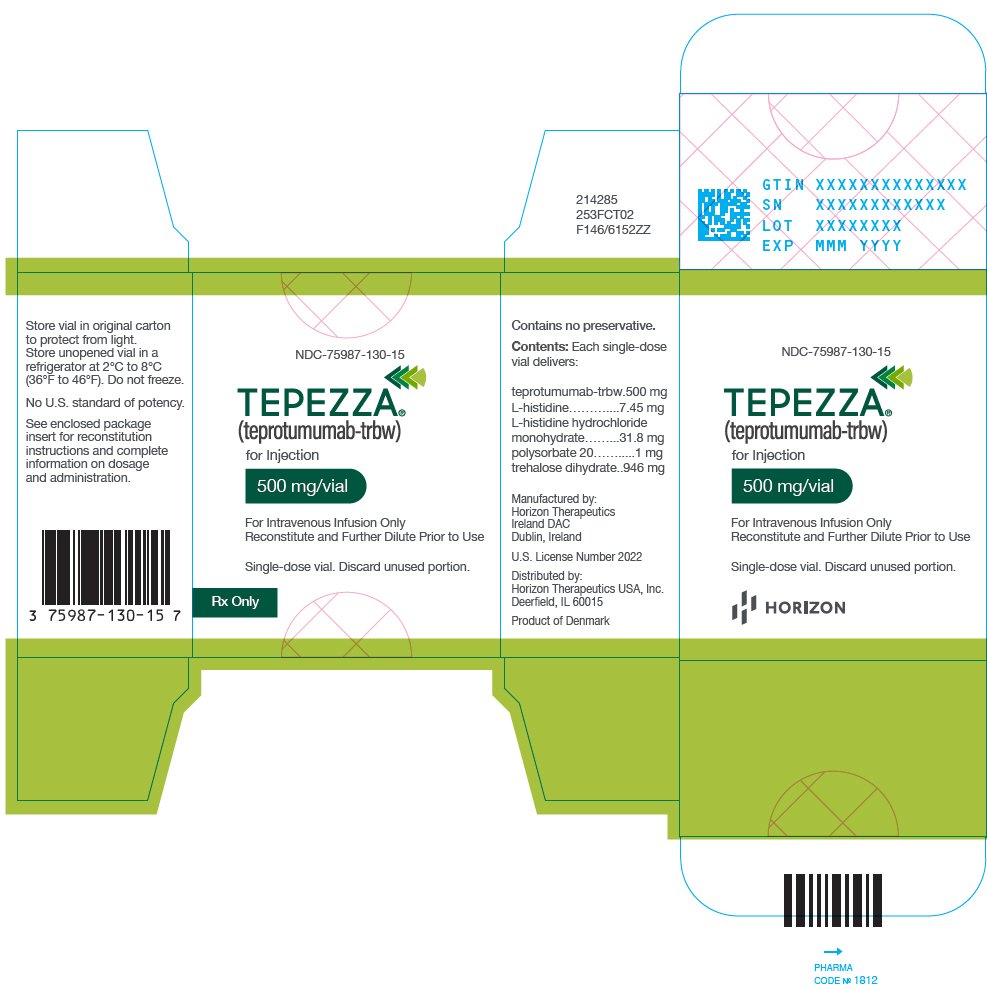 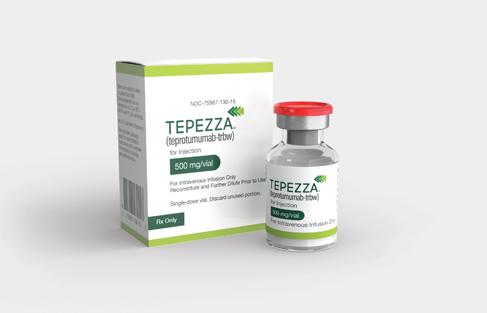