Sodium Thiosulfate Injection is indicated for sequential use with sodium nitrite for the treatment of acute cyanide poisoning that is judged to be serious or life-threatening. When the diagnosis of cyanide poisoning is uncertain, the potential risks associated with Sodium Thiosulfate Injection should be carefully weighed against the potential benefits, especially if the patient is not in extremis.

Cyanide poisoning may result from inhalation, ingestion, or dermal exposure to various cyanide-containing compounds, including smoke from closed-space fires. Sources of cyanide poisoning include hydrogen cyanide and its salts, cyanogenic plants, aliphatic nitriles, and prolonged exposure to sodium nitroprusside.

The presence and extent of cyanide poisoning are often initially unknown. There is no widely available, rapid, confirmatory cyanide blood test. Treatment decisions must be made on the basis of clinical history and signs and symptoms of cyanide intoxication.

In some settings, panic symptoms including tachypnea and vomiting may mimic early cyanide poisoning signs. The presence of altered mental status (e.g., confusion and disorientation) and/or mydriasis is suggestive of true cyanide poisoning although these signs can occur with other toxic exposures as well.

Use with Other Cyanide Antidotes

Sodium Nitrite Injection and Sodium Thiosulfate Injection are administered by slow intravenous injection. They should be given as early as possible after a diagnosis of acute life-threatening cyanide poisoning has been established. Sodium nitrite should be administered first, followed immediately by sodium thiosulfate. Blood pressure must be monitored during infusion in both adults and children. The rate of infusion should be decreased if significant hypotension is noted.

NOTE: If signs of poisoning reappear, repeat treatment using one-half the original dose of both sodium nitrite and sodium thiosulfate.

In adult and pediatric patients with known anemia, it is recommended that the dosage of sodium nitrite should be reduced proportionately to the hemoglobin concentration.

Visually inspect all parenteral drug products for particulate matter and discoloration prior to administration.

Patients should be monitored for at least 24-48 hours after Sodium Thiosulfate Injection administration for adequacy of oxygenation and perfusion and for recurrent signs and symptoms of cyanide toxicity. When possible, obtain hemoglobin/hematocrit when treatment is initiated. Measurements of oxygen saturation using standard pulse oximetry and calculated oxygen saturation values based on measured PO2 are unreliable in the presence of methemoglobinemia.

Administration of one vial constitutes a single dose.

Sodium thiosulfate drug product may contain trace impurities of sodium sulfite. The presence of a trace amount of sulfites in this product should not deter administration of the drug for treatment of emergency situations, even if the patient is sulfite-sensitive.

There have been no controlled clinical trials conducted to systematically assess the adverse events profile of sodium thiosulfate.

Body as a Whole: salty taste in mouth, warm sensation over body

In a series of 11 human subjects, a single intravenous infusion of 50 mL of 50% sodium thiosulfate was associated with increases in clotting time 1-3 days after administration. However, no significant changes were observed in other hematological parameters.

Formal drug interaction studies have not been conducted with Sodium Thiosulfate Injection.

There are no available data on Sodium Thiosulfate Injection use in pregnant women to establish a drug-associated risk for major birth defects, miscarriage, or adverse maternal or fetal outcomes. There are risks to the pregnant woman and fetus associated with untreated cyanide poisoning (see Clinical Considerations). Therefore, if a pregnant woman has known or suspected cyanide poisoning, Sodium Thiosulfate Injection for sequential use with sodium nitrite is recommended [see Indications and Usage (1)]. In published animal studies, no evidence of embryotoxicity or malformations was reported when sodium thiosulfate was administered during organogenesis to pregnant mice, rats, hamsters, or rats at 0.2 to 0.9 times the human daily dose of 12.5 g for cyanide poisoning. The studies did not test doses that were comparable to the human dose for cyanide poisoning (see Data).

Cyanide readily crosses the placenta. Cyanide poisoning is a medical emergency in pregnancy, which can be fatal for the pregnant woman and fetus if left untreated. Life-sustaining therapy should not be withheld due to pregnancy.

No malformations or evidence of embryo-fetal toxicity were noted when pregnant mice, rats, hamsters, or rabbits were administered oral doses of sodium thiosulfate of up to 550, 400, 400, or 580 mg/kg, respectively during organogenesis (0.2, 0.3, 0.26, and 0.9 times the human dose of 12.5 g/60 kg person for cyanide poisoning based on body surface area).

There are no data on the presence of sodium thiosulfate in human or animal milk, the effects on the breastfed infant, or the effects on milk production. Cyanide and thiocyanate (which is formed when sodium thiosulfate combines with cyanide) are present in human milk. Because of the potential for serious adverse reactions in the breastfed infant, breastfeeding is not recommended during treatment with Sodium Thiosulfate Injection. There are no data to determine when breastfeeding may be safely restarted following the administration of Sodium Thiosulfate Injection.

There are case reports in the medical literature of sodium nitrite in conjunction with sodium thiosulfate being administered to pediatric patients with cyanide poisoning; however, there have been no clinical studies to evaluate the safety or efficacy of sodium thiosulfate in the pediatric population. As for adult patients, dosing recommendations for pediatric patients have been based on theoretical calculations of antidote detoxifying potential, extrapolation from animal experiments, and a small number of human case reports.

Sodium thiosulfate is known to be substantially excreted by the kidney, and the risk of adverse reactions to this drug may be greater in patients with impaired renal function. Because elderly patients are more likely to have decreased renal function, care should be taken in dose selection, and it may be useful to monitor renal function.

Sodium thiosulfate is known to be substantially excreted by the kidney, and the risk of toxic reactions to this drug may be greater in patients with impaired renal function. Because elderly patients are more likely to have decreased renal function, care should be taken in dose selection, and it may be useful to monitor renal function.

Sodium thiosulfate has the chemical name thiosulfuric acid, disodium salt, pentahydrate. The chemical formula is Na2S2O3∙ 5H2O and the molecular weight is 248.17. The structural formula is:

Exposure to a high dose of cyanide can result in death within minutes due to the inhibition of cytochrome oxidase resulting in arrest of cellular respiration. Specifically, cyanide binds rapidly with cytochrome a3, a component of the cytochrome c oxidase complex in mitochondria. Inhibition of cytochrome a3 prevents the cell from using oxygen and forces anaerobic metabolism, resulting in lactate production, cellular hypoxia and metabolic acidosis. In massive acute cyanide poisoning, the mechanism of toxicity may involve other enzyme systems as well.

The synergy resulting from treatment of cyanide poisoning with the combination of sodium nitrite and sodium thiosulfate is the result of differences in their primary mechanisms of action as antidotes for cyanide poisoning.

Sodium nitrite is thought to exert its therapeutic effect by reacting with hemoglobin to form methemoglobin, an oxidized form of hemoglobin incapable of oxygen transport but with high affinity for cyanide. Cyanide preferentially binds to methemoglobin over cytochrome a3, forming the nontoxic cyanomethemoglobin. Methemoglobin displaces cyanide from cytochrome oxidase, allowing resumption of aerobic metabolism. The chemical reaction is as follows:

The primary route of endogenous cyanide detoxification is by enzymatic transulfuration to thiocyanate (SCN-), which is relatively nontoxic and readily excreted in the urine. Sodium thiosulfate is thought to serve as a sulfur donor in the reaction catalyzed by the enzyme rhodanese, thus enhancing the endogenous detoxification of cyanide in the following chemical reaction:

In dogs, pretreatment with sodium thiosulfate to achieve a steady state level of 2 μmol/mL increased the rate of conversion of cyanide to thiocyanate over 30-fold.

Thiosulfate taken orally is not systemically absorbed. Most of the thiosulfate is oxidized to sulfate or is incorporated into endogenous sulphur compounds; a small proportion is excreted through the kidneys. Approximately 20-50% of exogenously administered thiosulfate is eliminated unchanged via the kidneys. After an intravenous injection of 1 g sodium thiosulfate in patients, the reported serum thiosulfate half-life was approximately 20 minutes. However, after an intravenous injection of a substantially higher dose of sodium thiosulfate (150 mg/kg, that is, 9 g for 60 kg body weight) in normal healthy men, the reported elimination half-life was 182 minutes.

After detoxification, in healthy subjects, thiocyanate is excreted mainly in the urine at a rate inversely proportional to creatinine clearance. In healthy subjects, the elimination half-life and volume of distribution of thiocyanate have been reported to be 2.7 days and 0.25 L/kg, respectively. However, in subjects with renal insufficiency the reported elimination half life is approximately 9 days.

Long-term studies in animals have not been performed to evaluate the potential carcinogenicity of sodium thiosulfate.

Sodium thiosulfate was negative for clastogenic potential in the in vivo mammalian erythrocyte micronucleus assay in rats.

Animal studies to examine the effects of sodium thiosulfate on fertility have not been conducted.

The human data supporting the use of sodium thiosulfate for cyanide poisoning consists primarily of published case reports. There are no randomized controlled clinical trials. Nearly all the human data describing the use of sodium thiosulfate report its use in conjunction with sodium nitrite. Dosing recommendations for humans have been based on theoretical calculations of antidote detoxifying potential, extrapolation from animal experiments, and a small number of human case reports.

There have been no human studies to prospectively and systematically evaluate the safety of sodium thiosulfate or sodium nitrite in humans. Available human safety information is based largely on anecdotal case reports and case series of limited scope.

THE EFFECTIVENESS OF SODIUM THIOSULFATE AND SODIUM NITRITE FOR THE TREATMENT OF ACUTE CYANIDE POISONING HAS NOT BEEN STUDIED IN HUMANS IN ADEQUATE AND WELL-CONTROLLED CLINICAL TRIALS BECAUSE INDUCING THE CONDITION IN HUMANS TO STUDY THE DRUG'S EFFICACY IS NOT ETHICAL.

Animal studies conducted in other species (e.g., rat, guinea pig, sheep, pigeon and cat) have also supported a synergistic effect of intravenous sodium nitrite and sodium thiosulfate in the treatment of cyanide poisoning.

Protect from direct light. Do not freeze.

Sodium Thiosulfate Injection is indicated for cyanide poisoning and in this setting, patients will likely be unresponsive or may have difficulty in comprehending counseling information.

When feasible, patients should be informed of the possibility of hypotension.

Where feasible, patients should be informed of the need for close monitoring of blood pressure and oxygenation.

Advise women that breastfeeding is not recommended during treatment with Sodium Thiosulfate Injection [see Use in Specific Populations (8.2)].

FOR INTRAVENOUS USE
SINGLE DOSE ONLY

Any unused portion of a vial
should be discarded.

Use with
Sodium Nitrite
for Treatment of
Cyanide Poisoning 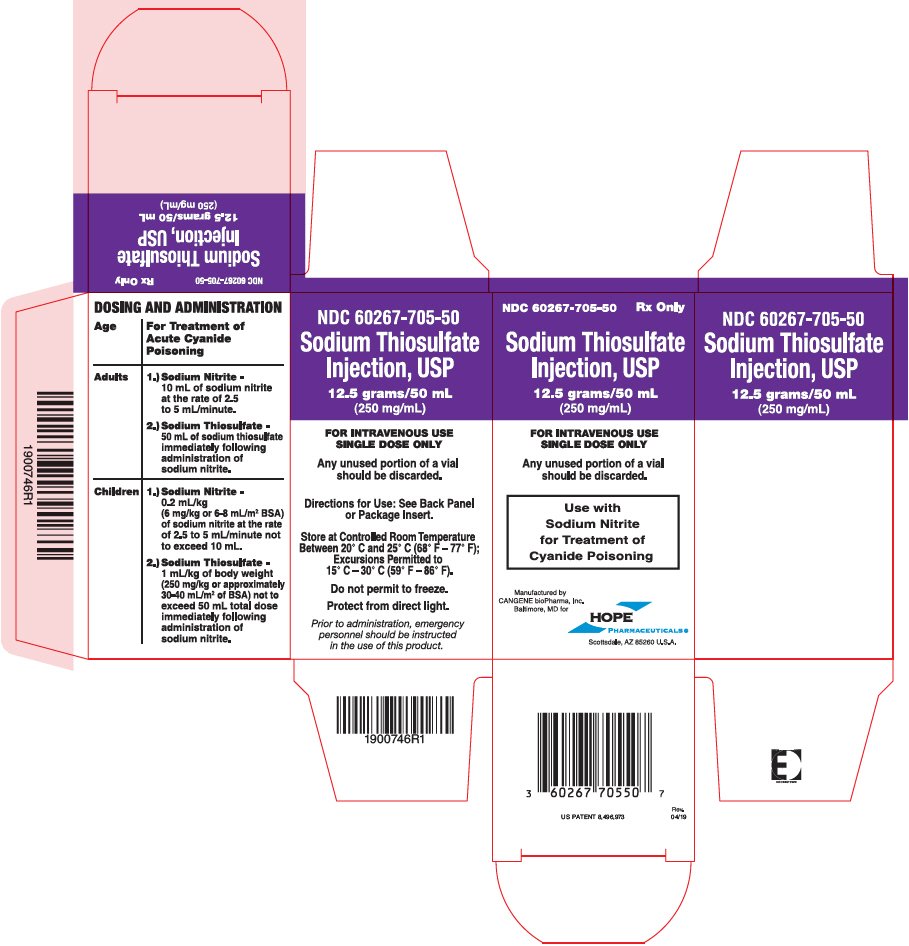