Silvadene Cream 1% is a soft, white, water-miscible cream containing the antimicrobial agent silver sulfadiazine in micronized form, which has the following structural formula:

Silver sulfadiazine has broad antimicrobial activity. It is bactericidal for many gram-negative and gram-positive bacteria as well as being effective against yeast. Results from in vitro testing are listed below.

Sufficient data have been obtained to demonstrate that silver sulfadiazine will inhibit bacteria that are resistant to other antimicrobial agents and that the compound is superior to sulfadiazine.

Silver sulfadiazine is not a carbonic anhydrase inhibitor and may be useful in situations where such agents are contraindicated.

Silvadene Cream 1% (silver sulfadiazine) is a topical antimicrobial drug indicated as an adjunct for the prevention and treatment of wound sepsis in patients with second- and third-degree burns.

Because sulfonamide therapy is known to increase the possibility of kernicterus, Silvadene Cream 1% should not be used on pregnant women approaching or at term, on premature infants, or on newborn infants during the first 2 months of life.

Absorption of silver sulfadiazine varies depending upon the percent of body surface area and the extent of the tissue damage. Although few have been reported, it is possible that any adverse reaction associated with sulfonamides may occur. Some of the reactions, which have been associated with sulfonamides, are as follows: blood dyscrasias including agranulocytosis, aplastic anemia, thrombocytopenia, leukopenia, and hemolytic anemia; dermatologic and allergic reactions, including life-threatening cutaneous reactions [Stevens-Johnson syndrome (SJS), toxic epidermal necrolysis (TEN) and exfoliative dermatitis]; gastrointestinal reactions; hepatitis and hepatocellular necrosis; CNS reactions; and toxic nephrosis.

Fungal proliferation in and below the eschar may occur. However, the incidence of clinically reported fungal superinfection is low.

The use of Silvadene Cream 1% (silver sulfadiazine) in some cases of glucose-6-phosphate dehydrogenase-deficient individuals may be hazardous, as hemolysis may occur.

If hepatic and renal functions become impaired and elimination of drug decreases, accumulation may occur and discontinuation of Silvadene Cream 1% (silver sulfadiazine) should be weighed against the therapeutic benefit being achieved.

In considering the use of topical proteolytic enzymes in conjunction with Silvadene Cream 1%, the possibility should be noted that silver may inactivate such enzymes.

In the treatment of burn wounds involving extensive areas of the body, the serum sulfa concentrations may approach adult therapeutic levels (8 mg% to 12 mg%). Therefore, in these patients it would be advisable to monitor serum sulfa concentrations. Renal function should be carefully monitored and the urine should be checked for sulfa crystals. Absorption of the propylene glycol vehicle has been reported to affect serum osmolality, which may affect the interpretation of laboratory tests.

Long-term dermal toxicity studies of 24 months' duration in rats and 18 months' in mice with concentrations of silver sulfadiazine three to ten times the concentration in Silvadene Cream 1% revealed no evidence of carcinogenicity.

A reproductive study has been performed in rabbits at doses up to three to ten times the concentration of silver sulfadiazine in Silvadene Cream 1% and has revealed no evidence of harm to the fetus due to silver sulfadiazine. There are, however, no adequate and well-controlled studies in pregnant women. Because animal reproduction studies are not always predictive of human response, this drug should be used during pregnancy only if clearly justified, especially in pregnant women approaching or at term. (See CONTRAINDICATIONS.)

It is not known whether silver sulfadiazine is excreted in human milk. However, sulfonamides are known to be excreted in human milk, and all sulfonamide derivatives are known to increase the possibility of kernicterus. Because of the possibility for serious adverse reactions in nursing infants from sulfonamides, a decision should be made whether to discontinue nursing or to discontinue the drug, taking into account the importance of the drug to the mother.

Of the total number of subjects in clinical studies of Silvadene Cream 1%, seven percent were 65 years of age and over. No overall differences in safety or effectiveness were observed between these subjects and younger subjects, and other reported clinical experience has not identified differences in responses between the elderly and younger patients, but greater sensitivity of some older individuals cannot be ruled out.

Safety and effectiveness in pediatric patients have not been established. (See CONTRAINDICATIONS.)

Reduction in bacterial growth after application of topical antibacterial agents has been reported to permit spontaneous healing of deep partial-thickness burns by preventing conversion of the partial thickness to full thickness by sepsis. However, reduction in bacterial colonization has caused delayed separation, in some cases necessitating escharotomy in order to prevent contracture.

Prompt institution of appropriate regimens for care of the burned patient is of prime importance and includes the control of shock and pain. The burn wounds are then cleansed and debrided, and Silvadene Cream 1% (silver sulfadiazine) is applied under sterile conditions. The burn areas should be covered with Silvadene Cream 1% at all times. The cream should be applied once to twice daily to a thickness of approximately 1/16 inch. Whenever necessary, the cream should be reapplied to any areas from which it has been removed by patient activity. Administration may be accomplished in minimal time because dressings are not required. However, if individual patient requirements make dressings necessary, they may be used.

Treatment with Silvadene Cream 1% should be continued until satisfactory healing has occurred, or until the burn site is ready for grafting. The drug should not be withdrawn from the therapeutic regimen while there remains the possibility of infection except if a significant adverse reaction occurs.

This product's label may have been updated. For current full prescribing information, please visit www.pfizer.com.

FOR TOPICAL USE ONLY. 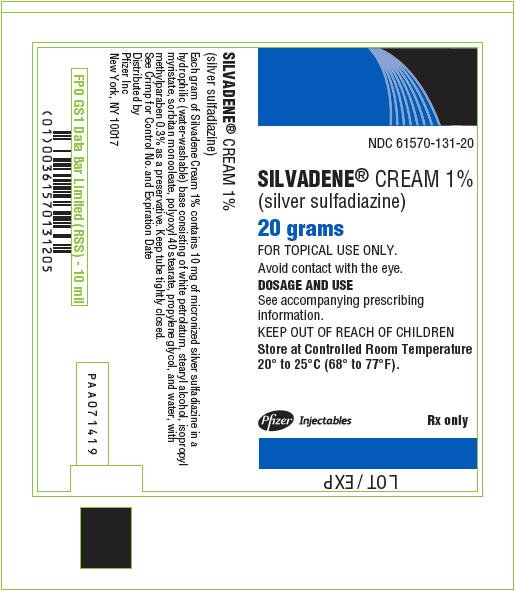 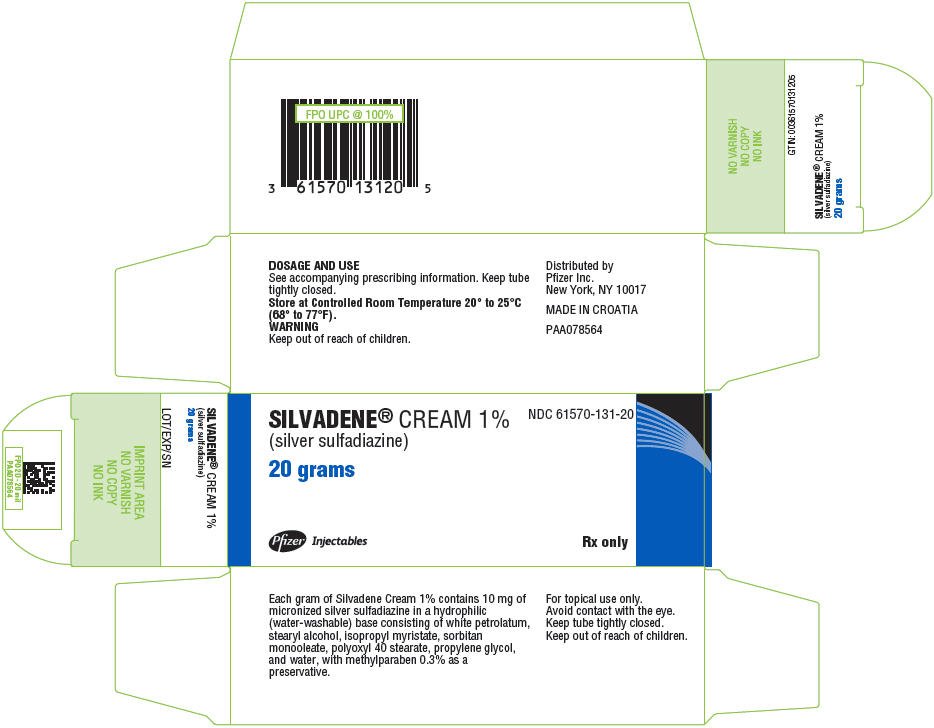 FOR TOPICAL USE ONLY
Avoid contact with the eye.