Pre-Pen has the following structure: 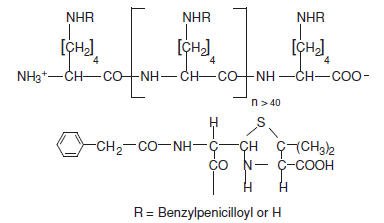 Pre-Pen is a skin test antigen reagent that reacts specifically with benzylpenicilloyl IgE antibodies initiating the release of chemical mediators which produce an immediate wheal and flare reaction at a skin test site. All individuals exhibiting a positive skin test to Pre-Pen possess IgE against the benzylpenicilloyl structural group which is a hapten. A hapten is a low molecular weight chemical that conjugates with a carrier (e.g. poly-l-lysine) resulting in the formation of an antigen with the hapten’s specificity. The benzylpenicilloyl hapten is the major antigenic determinant in penicillin-allergic individuals. However, many individuals reacting positively to Pre-Pen will not develop a systemic allergic reaction on subsequent exposure to therapeutic penicillin, especially among those who have not reacted to penicillins in the past. Thus, the Pre-Pen skin test determines the presence of penicilloyl IgE antibodies which are necessary but not sufficient for acute allergic reactions due to the major penicilloyl determinant.

Indications and Usage for Pre-Pen

Pre-Pen is contraindicated in those patients who have exhibited either a systemic or marked local reaction to its previous administration. Patients known to be extremely hypersensitive to penicillin should not be skin tested.

No reagent, test, or combination of tests will completely assure that a reaction to penicillin therapy will not occur.

The value of the Pre-Pen skin test alone as a means of assessing the risk of administering therapeutic penicillin (when penicillin is the preferred drug of choice) in the following situations is not established:

1.
Adult patients who give no history of clinical penicillin hypersensitivity.
2.
Pediatric patients.

In addition, the clinical value of Pre-Pen where exposure to penicillin is suspected as a cause of a current drug reaction or in patients who are undergoing routine allergy evaluation is not known. Likewise, the clinical value of Pre-Pen skin tests alone in determining the risk of administering semi-synthetic penicillins (phenoxymethyl penicillin, ampicillin, carbenicillin, dicloxacillin, methicillin, nafcillin, oxacillin, amoxicillin), cephalosporin-derived antibiotics, and penem antibiotics is not known.

In addition to the results of the Pre-Pen skin test, the decision to administer or not administer penicillin should take into account individual patient factors. Healthcare professionals should keep in mind the following:

Animal reproduction studies have not been conducted with Pre-Pen. It is not known whether Pre-Pen can cause fetal harm when administered to a pregnant woman or can affect reproduction capacity. The hazards of skin testing in such patients should be weighed against the hazard of penicillin therapy without skin testing.

Occasionally, patients may develop an intense local inflammatory response at the skin test site. Rarely, patients will develop a systemic allergic reaction, manifested by generalized erythema, pruritus, angioedema, urticaria, dyspnea, hypotension, and anaphylaxis. The usual methods of treating a skin test antigen-induced reaction — the applications of a venous occlusion tourniquet proximal to the skin test site and administration of epinephrine are recommended. The patient should be kept under observation for several hours.

Skin testing responses can be attenuated by interfering drugs (e.g. H1-antihistamines and vasopressors). Skin testing should be delayed until the effects of such drugs have dissipated, or a separate skin test with histamine can be used to evaluate persistent antihistaminic effects in vivo. Due to the risk of potential systemic allergic reactions, skin testing should be performed in an appropriate healthcare setting under direct medical supervision.

Skin testing is usually performed on the inner volar aspect of the forearm. The skin test antigen should always be applied first by the puncture technique. After preparing the skin surface, apply a small drop of Pre-Pen solution using a sterile 22-28 gauge needle. The same needle can then be used to make a single shallow puncture of the epidermis through the drop of Pre-Pen. Very little pressure is required to break the epidermal continuity. Observe for the appearance of a wheal, erythema, and the occurrence of itching at the test site during the succeeding 15 minutes at which time the solution over the puncture site is wiped off. A positive reaction consists of the development within 10 minutes of a pale wheal, sometimes with pseudopods, surrounding the puncture site and varying in diameter from 5 to 15 mm (or more). This wheal may be surrounded by a variable diameter of erythema, and accompanied by a variable degree of itching. The most sensitive individuals develop itching quickly, and the wheal and erythema are prompt in their appearance. As soon as a positive response as defined above is clearly evident, the solution over the scratch should be immediately wiped off. If the puncture test is either negative or equivocally positive (less than 5 mm wheal with little or no erythema and no itching), an intradermal test may be performed.

Using a 0.5 to 1.0 cc syringe with a 3/8” to 5/8”long, 26 to 30 gauge, short bevel needle, withdraw the contents of the ampule. Prepare with an alcohol swab a skin test area on the upper, outer arm, sufficiently below the deltoid muscle to permit proximal application of a tourniquet later, if necessary. Be sure to eject all air from the syringe through the needle, then insert the needle, bevel up immediately below the skin surface. Inject an amount of Pre-Pen sufficient to raise a small intradermal bleb of about 3 mm in diameter, in duplicate at least 2 cm apart. Using a separate syringe and needle, inject a like amount of saline or allergen diluting solution as a control at least 5 cm removed from the antigen test sites. Most skin reactions will develop within 5-15 minutes and response to the skin test is read at 20 minutes as follows:

Negative response — no increase in size of original bleb and no greater reaction than the control site.

Positive response — itching and significant increase in size of original blebs to at least 5 mm. Wheal may exceed 20 mm in diameter and exhibit pseudopods.

If the control site exhibits a wheal greater than 2-3 mm, repeat the test, and if the same reaction is observed, a physician experienced with allergy skin testing should be consulted.

Box of 5 single dose ampules. Ampules are opened by snapping the neck of the ampule using two forefingers of each hand. Visually inspect for glass chards before use. Each ampule is for single patient use only. Discard any unused portion.

Pre-Pen is optimally stored under refrigeration (2-8° C). Pre-Pen subjected to ambient temperatures for more than 24 hours should be discarded. As with all parenteral drug products, Pre-Pen should be inspected visually for particulate matter and discoloration prior to administration. 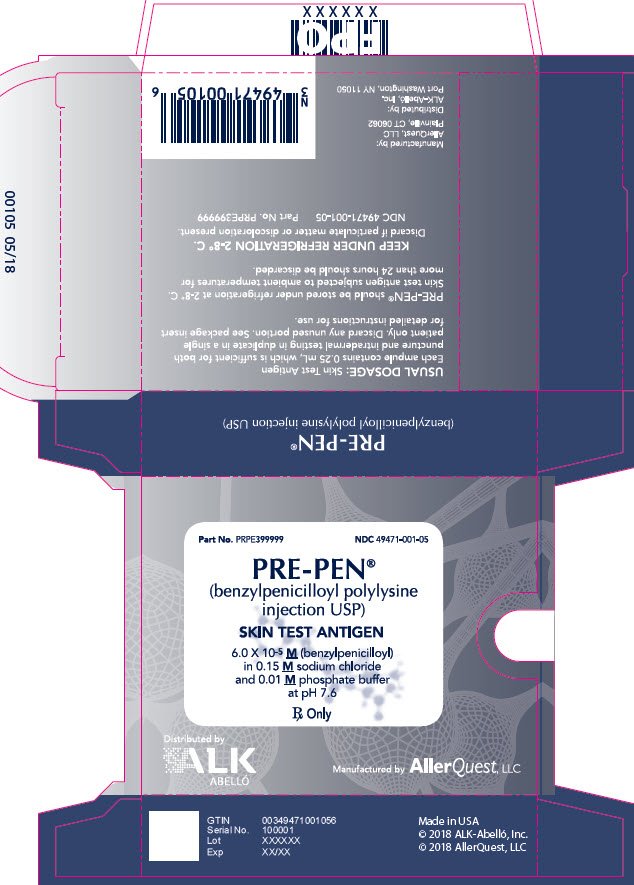 USUAL DOSAGE: Skin Test Antigen
Each ampule contains 0.25 mL, which is sufficient for both
puncture and intradermal testing in duplicate in a single
patient only. Discard any unused portion. See package insert
for detailed instructions for use.

Pre-Pen® should be stored under refrigeration at 2-8° C.
Skin test antigen subjected to ambient temperatures for
more than 24 hours should be discarded.