Metopirone (metyrapone Capsules) 250 mg is an inhibitor of endogenous adrenal corticosteroid synthesis, available as 250-mg capsules for oral administration. Its chemical name is 2-methyl-1, 2-di-3-pyridyl-1-propanone, and its structural formula is

Metyrapone is a white to light amber, fine, crystalline powder, having a characteristic odor. It is sparingly soluble in water, and soluble in methanol and in chloroform. It forms water-soluble salts with acids. Its molecular weight is 226.28.

The pharmacological effect of Metopirone is to reduce cortisol and corticosterone production by inhibiting the 11-beta-hydroxylation reaction in the adrenal cortex. Removal of the strong inhibitory feedback mechanism exerted by cortisol results in an increase in adrenocorticotropic hormone (ACTH) production by the pituitary. With continued blockade of the enzymatic steps leading to production of cortisol and corticosterone, there is a marked increase in adrenocortical secretion of their immediate precursors, 11-desoxycortisol and desoxycorticosterone, which are weak suppressors of ACTH release, and a corresponding elevation of these steroids in the plasma and of their metabolites in the urine. These metabolites are readily determined by measuring urinary 17-hydroxycorticosteroids (17-OHCS) or 17-ketogenic steroids (17-KGS). Because of these actions, Metopirone is used as a diagnostic test, with urinary 17-OHCS measured as an index of pituitary ACTH responsiveness. Metopirone may also suppress biosynthesis of aldosterone, resulting in a mild natriuresis.

The response to Metopirone does not occur immediately. Following oral administration, peak steroid excretion occurs during the subsequent 24-hour period.

Metopirone is absorbed rapidly and well when administered orally as prescribed.

The major biotransformation is reduction of the ketone to metyrapol, an active alcohol metabolite. Eight hours after a single oral dose, the ratio of metyrapone to metyrapol in the plasma is 1:1.5. Metyrapone and metyrapol are both conjugated with glucuronide.

Metyrapone is rapidly eliminated from the plasma. The mean ± SD terminal elimination half-life is 1.9 ± 0.7 hours. Metyrapol takes about twice as long as metyrapone to be eliminated from the plasma. After administration of 4.5 g metyrapone (750 mg every 4 hours), an average of 5.3% of the dose was excreted in the urine in the form of metyrapone (9.2% free and 90.8% as glucuronide) and 38.5% in the form of metyrapol (8.1% free and 91.9% as glucuronide) within 72 hours after the first dose was given.

Indications and Usage for Metopirone

Metopirone is a diagnostic drug for testing hypothalamic-pituitary ACTH function.

Metopirone is contraindicated in patients with adrenal cortical insufficiency, or hypersensitivity to Metopirone or to any of its excipients.

Ability of adrenals to respond to exogenous ACTH should be demonstrated before Metopirone is employed as a test. In the presence of hypo- or hyperthyroidism, response to the Metopirone test may be subnormal.

Since Metopirone may cause dizziness and sedation, patients should exercise caution when driving or operating machinery.

Drugs affecting pituitary or adrenocortical function, including all corticosteroid therapy, must be discontinued prior to and during testing with Metopirone.

The metabolism of Metopirone is accelerated by phenytoin; therefore, results of the test may be inaccurate in patients taking phenytoin within two weeks before.

A subnormal response may occur in patients on estrogen therapy.

Long-term carcinogenicity and reproduction studies in animals have not been conducted.

Metopirone was not mutagenic with or without metabolic activation in three strains of bacteria.

A subnormal response to Metopirone may occur in pregnant women. Animal reproduction studies have not been conducted with Metopirone. The Metopirone test was administered to 20 pregnant women in their second and third trimester of pregnancy and evidence was found that the fetal pituitary responded to the enzymatic block. It is not known if Metopirone can affect reproduction capacity. Metopirone should be given to a pregnant woman only if clearly needed.

Animal reproduction studies adequate to evaluate teratogenicity and postnatal development have not been conducted with Metopirone.

Clinical studies of Metopirone did not include sufficient numbers of subjects aged 65 years and over to determine whether they respond differently from younger subjects.

Other reported clinical experience has not identified differences in responses between the elderly and younger patients. In general, dose selection for an elderly patient should be cautious, reflecting the greater frequency of decreased hepatic, renal, or cardiac function, and of concomitant disease or other drug therapy.

One case has been recorded in which a 6-year-old girl died after two doses of Metopirone, 2 g.

The clinical picture of poisoning with Metopirone is characterized by gastrointestinal symptoms and by signs of acute adrenocortical insufficiency.

In patients under treatment with insulin or oral antidiabetics, the signs and symptoms of acute poisoning with Metopirone may be aggravated or modified.

There is no specific antidote. Besides general measures to eliminate the drug and reduce its absorption, a large dose of hydrocortisone should be administered at once, together with saline and glucose infusions.

For a few days blood pressure and fluid and electrolyte balance should be monitored.

This test, usually given on an outpatient basis, determines plasma 11-desoxycortisol and/or ACTH levels after a single dose of Metopirone. The patient is given 30 mg/kg (maximum 3 g Metopirone) at midnight with yogurt or milk. The same dose is recommended in children. The blood sample for the assay is taken early the following morning (7:30-8:00 a.m.). The plasma should be frozen as soon as possible. The patient is then given a prophylactic dose of 50 mg cortisone acetate.

Normal values will depend on the method used to determine ACTH and 11-desoxycortisol levels. An intact ACTH reserve is generally indicated by an increase in plasma ACTH to at least 44 pmol/L (200 ng/L) or by an increase in 11-desoxycortisol to over 0.2 μmol/L (70 μg/L). Patients with suspected adrenocortical insufficiency should be hospitalized overnight as a precautionary measure.

Day 2: ACTH test to determine the ability of adrenals to respond - Standard ACTH test such as infusion of 50 units ACTH over 8 hours and measurement of 24-hour urinary steroids. If results indicate adequate response, the Metopirone test may proceed.

Day 5: Administration of Metopirone: Recommended with milk or snack.

Adults: 750 mg orally, every 4 hours for 6 doses. A single dose is approximately equivalent to 15 mg/kg.

Children: 15 mg/kg orally every 4 hours for 6 doses. A minimal single dose of 250 mg is recommended.

Day 6: After administration of Metopirone - Determination of 24-hour urinary steroids for effect.

The normal 24-hour urinary excretion of 17-OHCS ranges from 3 to 12 mg. Following continuous intravenous infusion of 50 units ACTH over a period of 8 hours, 17-OHCS excretion increases to 15 to 45 mg per 24 hours.

In patients with a normally functioning pituitary, administration of Metopirone is followed by a two- to four-fold increase of 17-OHCS excretion or doubling of 17-KGS excretion.

Subnormal response in patients without adrenal insufficiency is indicative of some degree of impairment of pituitary function, either panhypopituitarism or partial hypopituitarism (limited pituitary reserve).

1. Panhypopituitarism is readily diagnosed by the classical clinical and chemical evidences of hypogonadism, hypothyroidism, and hypoadrenocorticism. These patients usually have subnormal basal urinary steroid levels. Depending upon the duration of the disease and degree of adrenal atrophy, they may fail to respond to exogenous ACTH in the normal manner. Administration of Metopirone is not essential in the diagnosis, but if given, it will not induce an appreciable increase in urinary steroids.

2. Partial hypopituitarism or limited pituitary reserve is the more difficult diagnosis as these patients do not present the classical signs and symptoms of hypopituitarism.

Measurements of target organ functions often are normal under basal conditions. The response to exogenous ACTH is usually normal, producing the expected rise of urinary steroids (17-OHCS or 17-KGS).

The response, however, to Metopirone is subnormal; that is, no significant increase in 17-OHCS or 17-KGS excretion occurs.

This failure to respond to metyrapone may be interpreted as evidence of impaired pituitary-adrenal reserve. In view of the normal response to exogenous ACTH, the failure to respond to metyrapone is inferred to be related to a defect in the CNS-pituitary mechanisms which normally regulate ACTH secretions. Presumably the ACTH secreting mechanisms of these individuals are already working at their maximal rates to meet everyday conditions and possess limited "reserve" capacities to secrete additional ACTH either in response to stress or to decreased cortisol levels occurring as a result of metyrapone administration.

Subnormal response in patients with Cushing's syndrome is suggestive of either autonomous adrenal tumors that suppress the ACTH-releasing capacity of the pituitary or nonendocrine ACTH-secreting tumors.

An excessive excretion of 17-OHCS or 17-KGS after administration of Metopirone is suggestive of Cushing's syndrome associated with adrenal hyperplasia. These patients have an elevated excretion of urinary corticosteroids under basal conditions and will often, but not invariably, show a "supernormal" response to ACTH and also to Metopirone, excreting more than 35 mg per 24 hours of either 17-OHCS or 17-KGS.

Protect from moisture and heat. 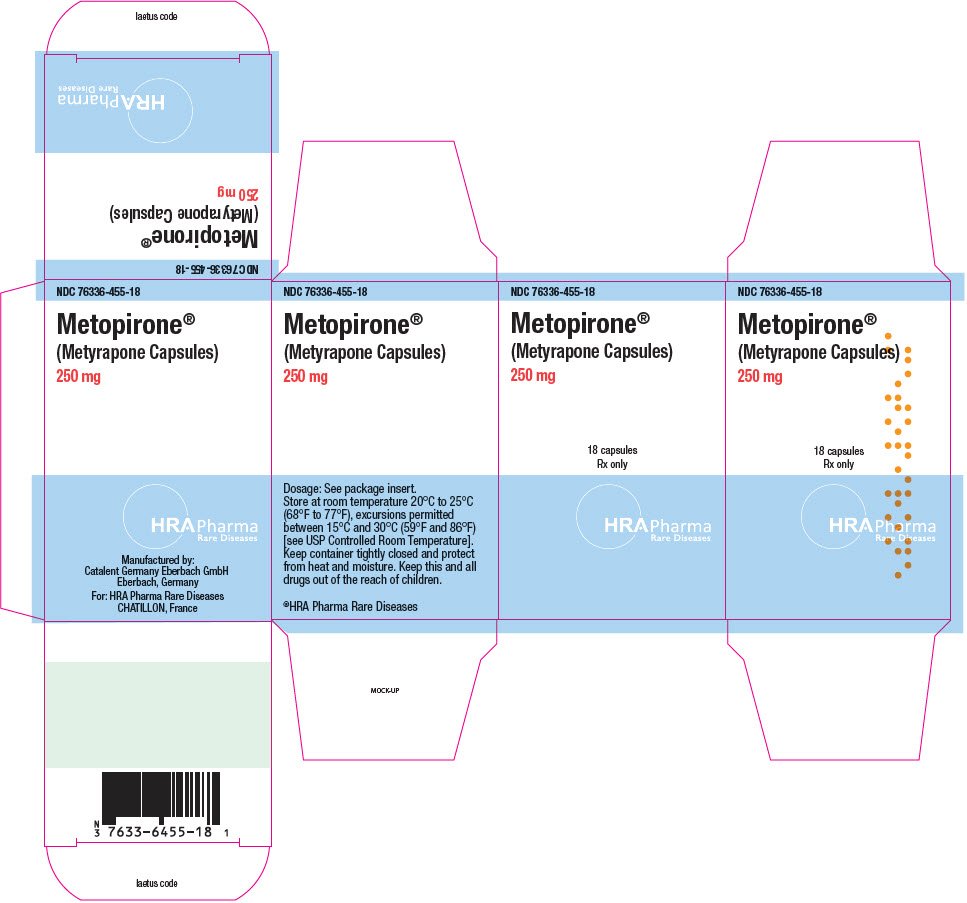 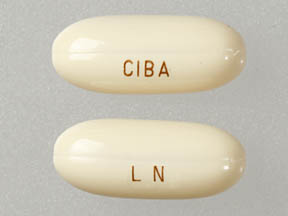