Mepsevii is indicated in pediatric and adult patients for the treatment of Mucopolysaccharidosis VII (MPS VII, Sly syndrome).

The effect of Mepsevii on the central nervous system manifestations of MPS VII has not been determined.

Mepsevii should be administered under the supervision of a healthcare professional with the capability to manage anaphylaxis. Premedication is recommended 30 to 60 minutes prior to the start of the infusion [see Dosage and Administration (2.2)].

The recommended dosage of Mepsevii is 4 mg/kg administered by intravenous infusion every two weeks.

Prepare Mepsevii according to the following steps using aseptic technique:

1. Determine the number of vials to be diluted based on the patient’s actual weight and the recommended dose of 4 mg/kg, using the following calculations (a-b):

2. Round to the next whole vial and remove the required number of vials from the refrigerator to allow them to reach room temperature. Do not heat, microwave or shake vials.

3. The final solution will be a 1:1 dilution of Mepsevii with 0.9% Sodium Chloride Injection, USP. More than 1:1 dilution may be used if the patient can tolerate additional infusion volume, taking into consideration cardiac function and fluid status.

4. For a 1:1 dilution, prepare the solution at room temperature, as follows:

a. Select an empty infusion bag, sized upon the total volume of the final solution.

c. Slowly withdraw the volume of the calculated Mepsevii dose from the appropriate number of vials (step 2a) using caution to avoid excessive agitation and any air or frothing. Use a sufficiently large needle (18 gauge) to minimize bubbles in the solution.

e. Add 0.9% Sodium Chloride Injection, USP equal to the volume of Mepsevii to the infusion bag.

f. Gently rock the infusion bag to ensure proper distribution of Mepsevii. Do not shake the solution.

Injection: 10 mg/5 mL (2 mg/mL) as a colorless to slightly yellow liquid in a single-dose vial.

Anaphylaxis to Mepsevii was reported in 2 of 20 patients in the clinical program [see Adverse Reactions (6.1)]. These reactions occurred during Mepsevii infusion and were observed as early as the first dose of Mepsevii for one patient. Manifestations included respiratory distress, cyanosis, decreased oxygen saturation, and hypotension. The two patients with anaphylaxis to Mepsevii during the clinical trials had one occurrence each and tolerated subsequent infusions of Mepsevii, without recurrence.

Anaphylaxis can be life-threatening. Mepsevii should be administered under the supervision of a healthcare professional with the capability to manage anaphylaxis. Patients should be observed for 60 minutes after Mepsevii administration. If severe systemic reactions occur, including anaphylaxis, immediately discontinue the Mepsevii infusion and provide appropriate medical treatment. Prior to discharge, inform patients of the signs and symptoms of anaphylaxis and instruct them to seek immediate medical care if symptoms occur. Consider the risks and benefits of re-administering Mepsevii following anaphylaxis.

The following serious adverse reactions are described below and elsewhere in the labeling:

The Mepsevii clinical program included 23 patients aged 5 months to 25 years who received treatment with Mepsevii at doses up to 4 mg/kg once every two weeks for up to 187 weeks. Nineteen patients were younger than 18 years of age.

Table 2 summarizes the adverse reactions that occurred in Study 301, a randomized start trial in 12 patients with MPS VII between the ages of 8 and 25 years [see Clinical Studies (14)].

Adverse reactions in Table 2 occurred in one or more patients treated with Mepsevii at a dosage of 4 mg/kg at a higher patient frequency than placebo. Adverse reaction incidence rates are presented in the table below to account for the different duration of exposure to active treatment vs. placebo.

*Adverse reaction incidence rates calculated per 8.3 patient years for exposure to Mepsevii, and 2.7 years of exposure for placebo

One patient receiving a dose of 4 mg/kg experienced a febrile convulsion during Mepsevii treatment at Week 66. The infusion was stopped, the patient received anticonvulsants, antipyretics and antibiotics, and the adverse reaction resolved. The patient subsequently was re-challenged without recurrence and continued on treatment.

As with all therapeutic proteins, there is potential for immunogenicity. The detection of antibody formation is highly dependent on the sensitivity and specificity of the assay. Additionally, the observed incidence of antibody (including neutralizing antibody) positivity in an assay may be influenced by several factors including assay methodology, sample handling, timing of sample collection, concomitant medications, and underlying disease. For these reasons, comparison of the incidence of antibodies in the studies described below with the incidence of antibodies in other studies to other vestronidase alfa products may be misleading.

Immunogenicity data were available from 23 patients who received Mepsevii for up to 187 weeks of treatment. Eighteen out of 23 (78%) patients developed anti-vestronidase alfa-vjbk antibodies (ADA). Ten of the 18 (55.6%) ADA-positive patients were tested positive for neutralizing antibodies (NAb). There is no correlation between ADA titer and NAb development.

The presence of ADA titer did not appear to affect reduction in urinary glycosaminoglycans (uGAGs).

There are no available data on Mepsevii use in pregnant women to determine a drug-associated risk of adverse developmental outcomes. In embryofetal development studies, vestronidase alfa-vjbk administered intravenously to pregnant rats and rabbits during the period of organogenesis showed no adverse developmental outcomes at doses up to 1.6 and 10 times, respectively for rats and rabbits, the exposure at the recommended human dose. In a pre- and post-natal development study in rats, an increased number of stillbirths were observed at exposures less than the recommended human dose (see Data). The clinical relevance of these animal findings is uncertain.

In embryofetal development studies, vestronidase alfa-vjbk administered intravenously to pregnant rats (once a week) and rabbits (once every 3 days) during the period of organogenesis showed no adverse developmental outcomes at doses up to 20 mg/kg. The 20 mg/kg dose in rats and rabbits provides approximately 1.6 and 10 times the human exposure (AUC) of 57.9 hr*mcg/mL at the 4 mg/kg dose administered once every other week, respectively.

The safety and effectiveness of Mepsevii have been established in pediatric patients less than 18 years of age [see Adverse Reactions (6),Clinical Studies (14)].

Clinical trials of Mepsevii did not include any patients aged 65 and over. It is not known whether elderly patients respond differently from younger patients.

Purified vestronidase alfa-vjbk exists as a homotetramer, with each monomer consisting of 629 amino acids. The calculated isotope average molecular mass of each non-glycosylated peptide chain is 72,562 Da.

Mucopolysaccharidosis VII (MPS VII or Sly syndrome) is a lysosomal disorder characterized by the deficiency of GUS that results in GAG accumulation in cells throughout the body leading to multisystem tissue and organ damage.

Vestronidase alfa-vjbk is a recombinant form of human GUS and is intended to provide exogenous GUS enzyme for uptake into cellular lysosomes. Mannose-6-phosphate (M6P) residues on the oligosaccharide chains allow binding of the enzyme to cell surface receptors, leading to cellular uptake of the enzyme, targeting to lysosomes and subsequent catabolism of accumulated GAGs in affected tissues.

The pharmacokinetics of vestronidase alfa-vjbk were evaluated in a total of 23 MPS VII patients including 19 pediatric patients and 4 adults. Serum exposures of vestronidase alfa-vjbk appeared to increase approximately proportionally from 1 mg/kg (0.25 times the approved recommended dosage) to 2 mg/kg (0.5 times the approved recommended dosage), and 4 mg/kg (the recommended dosage). After repeated dosing of 4 mg/kg every other week, the mean ± standard deviation of maximal concentration (Cmax) was 17.3 ± 9.6 mcg/mL (range: 4.7 to 35.7 mcg/mL); and the mean ± standard deviation of area under the concentration-time curve from time zero to the last measurable concentration (AUC0-t) was 50.9 ± 32.2 mcg*hr/mL (range: 17.4 to 153 mcg*hr/mL).

Vestronidase alfa-vjbk is a recombinant human enzyme and is therefore eliminated by proteolytic degradation into small peptides and amino acids.

No excretion studies have been conducted in humans. Vestronidase alfa-vjbk is not expected to be eliminated through renal or fecal excretion.

Vestronidase alfa-vjbk at intravenous doses up to 20 mg/kg administered weekly to rats prior to mating and after mating on gestation days 6, 9, 12, 15 and 18 (females), [approximately up to 4.5 times (male rats) and 1.6 times (female rats) the human AUC0-t of 3440 mcg*min/mL at the 4 mg/kg dose administered once every other week] was found to have no adverse effect on fertility and reproductive performance of male and female rats.

The clinical program for Mepsevii included 23 patients with MPS VII, 17 of whom were evaluable for efficacy, 20 for safety, and 23 for immunogenicity. Patients were enrolled in clinical trials and expanded access protocols receiving treatment at doses up to 4 mg/kg once every two weeks for up to 187 weeks. The patients ranged in age from 5 months to 25 years. Sixteen patients were younger than 18 years of age.

In Study 301, motor function, forced vital capacity, and visual acuity were assessed after 24 weeks of Mepsevii treatment and measured against pre-specified minimal important differences. The extremely small population of patients with MPS VII globally necessitated the enrollment of all patients able to participate resulting in a highly heterogeneous group. Clinical endpoints were not assessable in some patients due to their extent of disease, age or level of cognition. Repeated assessments of the six minute walk test (6MWT) were feasible in ten of 12 patients and are described further below. Of the three patients who improved on their 6MWT (Figure 1, left panel), two also were noted to have improvement in balance and gross motor proficiency as assessed by the Bruininks-Oseretsky Test of Motor Proficiency (BOT-2).

In this trial, the mean difference in 6MWT distance between Mepsevii and placebo treatment periods in patients able to perform the test at baseline and subsequent visits through Week 24 is shown in Table 3. The mean difference in 6MWT distance increases with increased treatment duration, however, due to the small size of the trial, standard errors are large.

*ANCOVA analysis of change from baseline in least squares (LS) mean between placebo and Mepsevii for different periods, after adjusting for study cohort, age, and baseline 6MWT distance. Patients who used assistive devices were imputed as zeros in the analysis.

**Number and treatment assignment of patients included in the analysis was based upon a randomized start trial design and patient ability to complete testing. Due to no placebo period for the three patients who received 48 weeks of Mepsevii in the first cohort of the randomized start design, more data were available for analyses during the treatment period (n=8) than during the placebo period (n=5). While data from 8 participants were available at each time point, due to missing observations, the 8 participants were not the same across all time points.

The observed individual 6MWT distances for the 10 patients who could perform the test in Study 301 and Study 202 through Week 184 are presented in Figure 1. The course of three patients with improvement in distance walked of at least 60 meters during the 301 Study compared to the start of Mepsevii treatment (Week 0) is shown in the left panel; the relatively stable course in the remaining seven patients, including those who used assistive devices, is shown in the right panel. 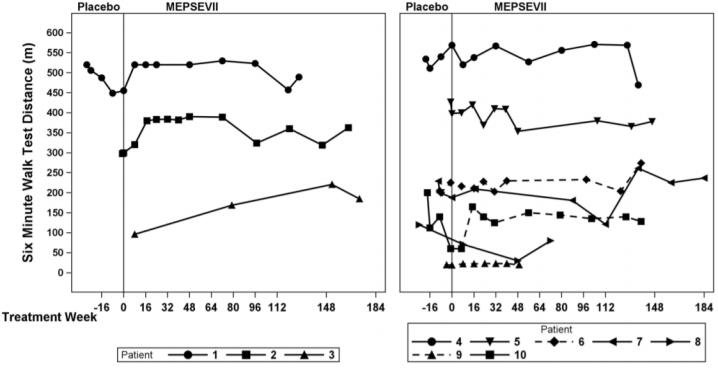 UX003-CL203 (referred to as Study 203; NCT 02418455 ) was an open-label, uncontrolled single arm study that enrolled 8 patients less than 5 years of age who received Mepsevii at a dose of 4 mg/kg every two weeks for 48 weeks of treatment and up to an additional 240 weeks during an optional continuation period. The study evaluated urinary GAG excretion, growth and hepatosplenomegaly. With long-term treatment, urinary GAG levels remained decreased upon exposure to Mepsevii. At baseline, all 8 patients had impaired growth, and height remained near the 5th percentile relative to age-matched gender norms throughout the trial. No significant changes in hepatosplenomegaly were observed.

Study UX003-CL201 (referred to as Study 201, NCT01856218) was a single arm, open-label, dose exploration trial completed outside the United States that enrolled three MPS VII patients, ranging in age from 5 years to 25 years. Two patients were male; two patients were white and one was Asian. After 120 weeks of exposure to Mepsevii, one patient demonstrated a 21% improvement over baseline in forced vital capacity (FVC% predicted) on pulmonary function testing in addition to a 105 meter improvement in the 6MWT. Two other patients with baseline hepatosplenomegaly had reduction in liver volume (24% and 53%) and spleen volume (28% and 47%) after 36 weeks of Mepsevii treatment. 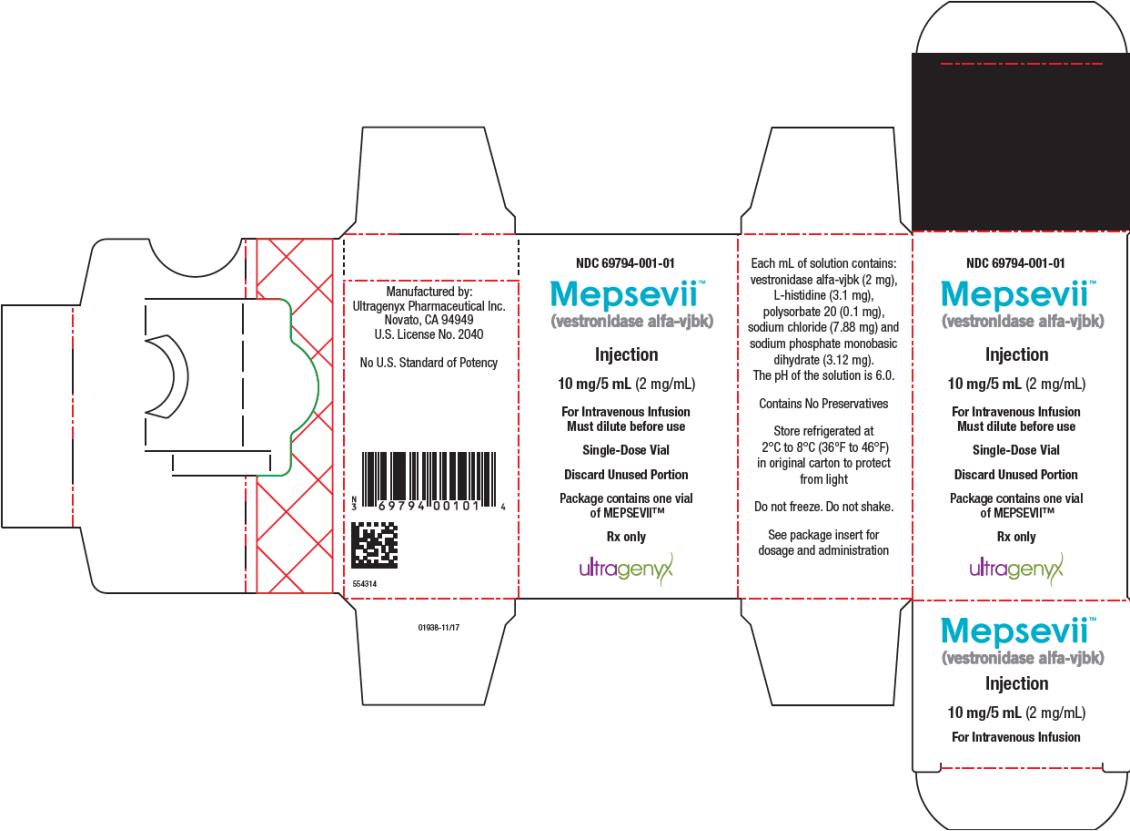