Indications and Usage for Livmarli

Livmarli is indicated for the treatment of cholestatic pruritus in patients with Alagille syndrome (ALGS) 1 year of age and older.

The recommended dosage is 380 mcg/kg once daily, taken 30 minutes before the first meal of the day. Start dosing at 190 mcg/kg administered orally once daily; after one week, increase to 380 mcg/kg once daily, as tolerated. The maximum daily dose volume for patients above 70kg is 3 mL or 28.5 mg per day. Refer to the dosing by weight guidelines presented in Table 1.

A calibrated measuring device (0.5 mL, 1 mL or 3 mL oral dosing dispenser) will be provided by the pharmacy to measure and deliver the prescribed dose accurately.

Store Livmarli between 20°C and 25°C (68°F and 77°F) [see How Supplied/Storage and Handling (16)]. Discard any remaining Livmarli 45 days after first opening of bottle.

Establish the baseline pattern of variability of liver tests prior to starting Livmarli, so that potential signs of liver injury can be identified. Monitor liver tests (e.g., ALT [alanine aminotransferase], AST [aspartate aminotransferase], TB [total bilirubin]), DB [direct bilirubin] and International Normalized Ratio [INR]) during treatment with Livmarli. Interrupt Livmarli if new onset liver test abnormalities occur in the absence of other causes. Once the liver test abnormalities either return back to baseline values or stabilize at a new baseline value, consider restarting Livmarli at 190 mcg/kg, and increase to 380 mcg/kg as tolerated. Consider discontinuing Livmarli permanently if liver test abnormalities recur or symptoms consistent with clinical hepatitis are observed [see Warnings and Precautions (5.1)].

Oral solution: 9.5 mg of maralixibat per mL as a clear, colorless to yellow solution.

Patients enrolled in Trial 1 had abnormal liver tests at baseline. During Trial 1, treatment-emergent elevations of liver tests or worsening of liver tests, relative to baseline values, were observed. Most abnormalities included elevation in ALT, AST, or T/DB. In Trial 1, one patient (TB elevated at baseline) discontinued Livmarli due to increased TB above baseline after 28 weeks. Four patients had ALT increases that led to dose modification (n=1), dose interruption (n=2), or permanent discontinuation (n=2) of Livmarli during the long-term, open-label extension period of Trial 1 [see Adverse Reactions (6.1)].

Obtain baseline liver tests and monitor during treatment. Dose reduction or treatment interruption may be considered if abnormalities occur in the absence of other causes. For persistent or recurrent liver test abnormalities, consider treatment discontinuation.

Livmarli was not evaluated in ALGS patients with cirrhosis. Monitor patients during treatment with Livmarli for elevations in liver tests and for the development of liver-related adverse reactions. Weigh the potential risks against the benefits of continuing treatment with Livmarli in patients who have experienced persistent or recurrent liver tests abnormalities. Discontinue Livmarli permanently if a patient progresses to portal hypertension or experiences a hepatic decompensation event.

If diarrhea, abdominal pain, and/or vomiting occur and no other etiologies are found, consider reducing the dose of Livmarli or interrupting Livmarli dosing. For diarrhea or vomiting, monitor for dehydration and treat promptly. Consider interrupting Livmarli dosing if a patient experiences persistent diarrhea or has diarrhea with accompanying signs and symptoms such as bloody stool, vomiting, dehydration requiring treatment, or fever.

When diarrhea, abdominal pain, and/or vomiting resolve, restart Livmarli at 190 mcg/kg/day and increase the dose as tolerated. If they recur upon re-challenge with Livmarli, then consider stopping Livmarli treatment.

Obtain serum FSV levels at baseline and monitor during treatment, along with any clinical manifestations. If FSV deficiency is diagnosed, supplement with FSV. Consider discontinuing Livmarli if FSV deficiency persists or worsens despite adequate FSV supplementation.

In the Alagille syndrome clinical development program, which includes five clinical studies comprising 86 patients, patients received doses of Livmarli up to 760 mcg/kg per day with a median duration of exposure of 32.3 months (range: 0.03 - 60.9 months). In Trial 1, the 4-week placebo control period occurred after 18 weeks of Livmarli treatment. In two supportive studies that included long-term open-label extensions, only 13 weeks of placebo-controlled treatment occurred which evaluated doses lower than 380 mcg/kg/day. The majority of Livmarli exposure in the development program occurred without a placebo control in open-label trial extensions.

The most common adverse reactions (≥5%) for ALGS patients treated with Livmarli are presented in Table 2 below. Treatment interruptions or dose reductions occurred in 5 (6%) patients due to diarrhea, abdominal pain, or vomiting.

Four (4.6%) patients in the pooled analysis experienced bilirubin increases above baseline, and Livmarli was subsequently withdrawn in two of these patients, who had elevated bilirubin at baseline.

Effects of Other Drugs on Livmarli

Effects of Livmarli on Other Drugs

Maternal use at the recommended clinical dose of Livmarli is not expected to result in measurable fetal exposure because systemic absorption following oral administration is low [see Clinical Pharmacology (12.3)]. Maralixibat may inhibit the absorption of fat-soluble vitamins [see Warnings and Precautions (5.3) and Clinical Considerations]. In animal reproduction studies, no developmental effects were observed (see Data).

Maralixibat may inhibit the absorption of fat-soluble vitamins (FSV). Monitor for FSV deficiency and supplement as needed. Increased supplementation of FSVs may be needed during pregnancy [see Warnings and Precautions (5.3)].

Livmarli has low absorption following oral administration, and breastfeeding is not expected to result in exposure of the infant to Livmarli at the recommended dose [see Clinical Pharmacology (12.3)]. There are no data on the presence of Livmarli in human milk, the effects on the breastfed infant, or the effects on milk production. Patients with ALGS can have FSV deficiency as part of their disease. Maralixibat may reduce absorption of fat-soluble vitamins [see Warnings and Precautions (5.3)]. Monitor FSV levels and supplement FSV intake, if FSV deficiency is observed during lactation. The developmental and health benefits of breastfeeding should be considered along with the mother's need for Livmarli and any potential adverse effects on the breastfed child from Livmarli or from the underlying maternal condition.

The safety and effectiveness of Livmarli for the treatment of cholestatic pruritus in pediatric patients with Alagille syndrome have been established in one study of patients 1 to 15 years of age (N=31) that included 18 weeks of open-label treatment followed by a 4 week placebo-controlled randomized withdrawal period and a subsequent 26-week open-label treatment period. Additional safety information was obtained from four studies in patients up to 21 years of age (N=55) [see Adverse Reactions (6) and Clinical Studies (14)].

The safety and effectiveness of Livmarli have not been established in patients less than 1 year of age.

The safety and effectiveness of Livmarli for the treatment of pruritus in ALGS in adult patients, 65 years of age and older, have not been established.

Clinical studies of Livmarli included ALGS patients with impaired hepatic function at baseline. The efficacy and safety in ALGS patients with clinically significant portal hypertension and in patients with decompensated cirrhosis have not been established [see Clinical Studies (14), Dosage and Administration (2.4), and Warnings and Precautions (5.1)].

Single doses of maralixibat up to 500 mg, approximately 18-fold higher than the recommended dose, have been administered in healthy adults and were tolerated without a meaningful increase in adverse effects when compared to lower doses. If an overdose occurs, discontinue Livmarli, monitor the patient for any signs and symptoms and institute general supportive measures if needed.

Livmarli (maralixibat) oral solution is an ileal bile acid transporter (IBAT) inhibitor. Maralixibat is present as a chloride salt with the chemical name 1-[[4-[[4-[(4R,5R)-3,3-dibutyl-7-(dimethylamino)-2,3,4,5-tetrahydro-4-hydroxy-1,1-dioxido-1-benzothiepin-5-yl]phenoxy]methyl]phenyl]methyl]-4-aza-1-azoniabicyclo[2.2.2]octane chloride. The molecular formula of maralixibat chloride is C40H56ClN3O4S with a molecular weight of 710.42. It has the following chemical structure: 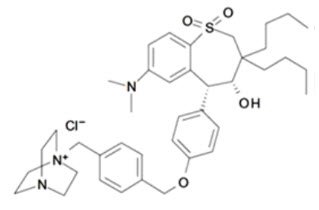 Maralixibat is a reversible inhibitor of the ileal bile acid transporter (IBAT). It decreases the reabsorption of bile acids (primarily the salt forms) from the terminal ileum.

Pruritus is a common symptom in patients with ALGS and the pathophysiology of pruritus in patients with ALGS is not completely understood. Although the complete mechanism by which maralixibat improves pruritus in ALGS patients is unknown, it may involve inhibition of the IBAT, which results in decreased reuptake of bile salts, as observed by a decrease in serum bile acids [see Clinical Pharmacology (12.2)].

In Trial 1, pediatric patients with ALGS were administered open-label treatment with Livmarli 380 mcg/kg once daily for 13 weeks after an initial 5-week dose-escalation period [see Clinical Studies (14)]. At baseline, serum bile acids were highly variable among patients ranging from 20 to 749 µmol/L and mean (SD) serum bile acid level was 283 (210.6) µmol/L. Serum bile acid levels decreased from baseline in the majority of patients as early as at Week 12 and the reduction in serum bile acids was generally maintained for the treatment period.

Following single oral administration of maralixibat in healthy adults at doses ranging from 1 mg to 500 mg, plasma concentrations of maralixibat were below the limit of quantification (0.25 ng/mL) at doses less than 20 mg and PK parameters could not be reliably estimated.

Maralixibat is minimally absorbed and plasma concentrations are often below the limit of quantification (0.25 ng/mL) after single or multiple doses at recommended doses. Following a single oral administration of maralixibat 30, 45, and 100 mg liquid formulation under fasted condition, AUClast and Cmax increased in a dose-dependent manner with increase of 4.6-and 2.4-fold, respectively, following a 3.3-fold dose increase from 30 to 100 mg.

No maralixibat metabolites have been detected in plasma. Three minor metabolites, accounting for <3% of maralixibat-associated fecal radioactivity in total, were identified following oral administration of [14C]maralixibat.

The pharmacokinetics of maralixibat were not studied in patients with impaired renal function, including those with end-stage renal disease (ESRD) or those on hemodialysis.

Effect of Other Drugs on Maralixibat

Maralixibat is not a substrate of the drug transporters MDR1 (P-gp), BCRP, OATP1B1, OATP1B3, or OATP2B2; therefore, concomitant drug products are not predicted to affect the disposition of maralixibat.

Effect of Maralixibat on Other Drugs

No drug-related tumors were observed following oral administration of maralixibat chloride to TgRasH2 mice at doses of up to 25 (males) or 75 (females) mg/kg/day for 26 weeks.

Thirty-one pediatric ALGS patients with cholestasis and pruritus were enrolled, with 90.3% of patients receiving at least one medication to treat pruritus at study entry. All patients had JAGGED1 mutation. Patients were administered open-label treatment with Livmarli 380 mcg/kg once daily for 13 weeks after an initial 5-week dose-escalation period; two patients discontinued treatment during this first 18 weeks of open-label treatment. The 29 patients who completed the open-label treatment phase were then randomized to continue treatment with Livmarli or receive matching placebo during the 4-week drug withdrawal period at Weeks 19-22 (n=16 placebo, n=13 Livmarli). All 29 patients completed the randomized, blinded drug withdrawal period; subsequently, patients received open-label Livmarli at 380 mcg/kg once daily for an additional 26 weeks.

Given the patients' young age, a single-item observer-reported outcome was used to measure patients' pruritus symptoms as observed by their caregiver twice daily (once in the morning and once in the evening) on the Itch Reported Outcome Instrument (ItchRO[Obs]). Pruritus symptoms were assessed on a 5-point ordinal response scale, with scores ranging from 0 (none observed or reported) to 4 (very severe). Patients were included in Trial 1 if their average pruritus score was greater than 2.0 (moderate) in the 2 weeks prior to baseline.

The average of the worst daily ItchRO(Obs) pruritus scores was computed for each week. For randomized patients, the mean (SD) at baseline (pre-treatment) was 3.1 (0.5) and the mean (SD) at Week 18 (pre-randomized withdrawal period) was 1.4 (0.9). On average, patients administered Livmarli for 22 weeks maintained pruritus reduction whereas those in the placebo group who were withdrawn from Livmarli after Week 18 returned to baseline pruritus scores by Week 22. Results from the placebo-controlled period are presented in Table 3. After re-entering the open-label treatment phase, both randomized treatment groups had similar mean pruritus scores by Week 28, the first week placebo patients received the full dosage of Livmarli after withdrawal. These observer-rated pruritus results are supported by similar results on patient-rated pruritus in patients 5 years of age and older who were able to self-report their itching severity.

Discard any remaining Livmarli 45 days after first opening of bottle.

Always store with cap on the bottle.

Advise the caregiver and patient of the following Livmarli risks and oral administration procedures: