Lamprene, clofazimine, is an antileprosy agent available as soft gelatin capsules for oral administration. Each capsule contains 50 mg of micronized clofazimine suspended in an oil-wax base. Clofazimine is a substituted iminophenazine bright-red dye. Its chemical name is 3-(p-chloroanilino)-10-(p-chlorophenyl)-2, 10-dihydro-2-isopropyliminophenazine, and its structural formula is 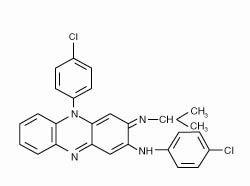 Clofazimine is a reddish-brown powder. It is readily soluble in benzene; soluble in chloroform; poorly soluble in acetone and in ethyl acetate; sparingly soluble in methanol and in ethanol; and virtually insoluble in water. Its molecular weight is 473.4.

Lamprene has a variable absorption rate in leprosy patients, ranging from 45%-62% after oral administration. The average serum concentrations in leprosy patients treated with 100 mg and 300 mg daily were 0.7 µg/mL and 1.0 µg/mL, respectively. After ingestion of a single dose of 300 mg, elimination of unchanged Lamprene and its metabolites in a 24-hour urine collection was negligible. Lamprene is retained in the human body for a long time. The half-life of Lamprene following repeated oral doses is estimated to be at least 70 days. Part of the ingested drug recovered from the feces may represent excretion via the bile. A small amount is also eliminated in the sputum, sebum, and sweat.

Lamprene is highly lipophilic and tends to be deposited predominantly in fatty tissue and in cells of the reticuloendothelial system. It is taken up by macrophages throughout the body. In autopsies performed on leprosy patients, clofazimine crystals were found predominantly in the mesenteric lymph nodes, adrenals, subcutaneous fat, liver, bile, gall bladder, spleen, small intestine, muscles, bones, and skin.

Measurement of the minimum inhibitory concentration (MIC) of Lamprene against leprosy bacilli in vitro is not yet feasible. In the mouse footpad system, the multiplication of M. leprae is inhibited by introducing 0.0001%- 0.001% Lamprene in the diet. Although bacterial killing may begin shortly after starting the drug, it cannot be measured in biopsy tissues taken from patients for mouse footpad studies until approximately 50 days after the start of therapy.

Lamprene does not show cross-resistance with dapsone or rifampin.

The following in vitro data are available, but their clinical significance is unknown. Lamprene has been shown in vitro to inhibit M. avium and M. bovis at concentrations of approximately 0.1-1.0 µg/mL. The MIC for M. avium-intracellulare isolated from patients with acquired immunodeficiency syndrome (AIDS) ranged from 1.0 to 5.0 µg/mL. With a few exceptions, microorganisms other than mycobacteria are not inhibited by Lamprene.

Combination drug therapy has been recommended for initial treatment of multibacillary leprosy to prevent the development of drug resistance.

There are no known contraindications.

Lamprene should be used with caution in patients who have gastrointestinal problems such as abdominal pain and diarrhea. Dosages of Lamprene of more than 100 mg daily should be given for as short a period as possible and only under close medical supervision. If a patient complains of colicky or burning pain in the abdomen, nausea, vomiting, or diarrhea, the dose should be reduced, and if necessary, the interval between doses should be increased, or the drug should be discontinued.

Physicians should be aware that skin discoloration due to Lamprene may result in depression. Two suicides have been reported in patients receiving Lamprene.

For skin dryness and ichthyosis, oil can be applied to the skin.

Patients should be told to take Lamprene with meals.

Preliminary data which suggest that dapsone may inhibit the anti-inflammatory activity of Lamprene have not been confirmed. If leprosy-associated inflammatory reactions develop in patients being treated with dapsone and clofazimine, it is still advisable to continue treatment with both drugs.

Long-term carcinogenicity studies in animals have not been conducted with Lamprene. Results of mutagenicity studies (Ames test) were negative. There was some evidence of impaired fertility in one study in rats treated at a dose 25 times the usual human dose; the number of offspring was reduced and there was a lower proportion of implantations.

Lamprene was not teratogenic in laboratory animals at dose levels equivalent to 8 times (rabbit) and 25 times (rat) the usual human daily dose. However, there was evidence of fetotoxicity in the mouse at 12-25 times the human dose, i.e., retardation of fetal skull ossification, increased incidence of abortions and stillbirths, and impaired neonatal survival. The skin and fatty tissue of offspring became discolored approximately 3 days after birth, which was attributed to the presence of Lamprene in the maternal milk.

It has been found that Lamprene crosses the human placenta. The skin of infants born to women who had received the drug during pregnancy was found to be deeply pigmented at birth. No evidence of teratogenicity was found in these infants. There are no adequate and well-controlled studies in pregnant women. Lamprene should be used during pregnancy only if the potential benefit justifies the risk to the fetus.

Lamprene is excreted in the milk of nursing mothers. Lamprene should not be administered to a nursing woman unless clearly indicated.

In general, Lamprene is well tolerated when administered in dosages no greater than 100 mg daily. The most consistent adverse reactions are usually dose related and are usually reversible when Lamprene is discontinued.

Adverse Reactions Occurring In More Than 1% of Patients

Adverse Reactions Occurring In Less Than 1% of Patients

No specific data are available on the treatment of overdosage with Lamprene. However, in case of overdose, the stomach should be emptied by inducing vomiting or by gastric lavage, and supportive symptomatic treatment should be employed.

Lamprene should be taken with meals.

Lamprene should be used preferably in combination with one or more other antileprosy agents to prevent the emergence of drug resistance.

For the treatment of proven dapsone-resistant leprosy, Lamprene should be given at a dosage of 100 mg daily in combination with one or more other antileprosy drugs for 3 years, followed by monotherapy with 100 mg of Lamprene daily. Clinical improvement usually can be detected between the first and third months of treatment and is usually clearly evident by the sixth month.

For dapsone-sensitive multibacillary leprosy, a combination therapy with two other antileprosy drugs is recommended. The triple-drug regimen should be given for at least 2 years and continued, if possible, until negative skin smears are obtained. At this time, monotherapy with an appropriate antileprosy drug can be instituted.

The treatment of erythema nodosum leprosum reactions depends on the severity of symptoms. In general, the basic antileprosy treatment should be continued, and if nerve injury or skin ulceration is threatened, corticosteroids should be given. Where prolonged corticosteroid therapy becomes necessary, Lamprene administered at dosages of 100 to 200 mg daily for up to 3 months may be useful in eliminating or reducing corticosteroid requirements. Dosages above 200 mg daily are not recommended, and the dosage should be tapered to 100 mg daily as quickly as possible after the reactive episode is controlled. The patient must remain under medical surveillance.