Gastromark is a turbid, slightly viscous, dark brown to orange-brown liquid formulation prepared for oral administration. The formulation contains water, sodium chloride, sorbitol, saccharin, carboxymethylcellulose, methylparaben, propylparaben, yellow dye #6, red dye #40, and flavoring. Each milliliter of Gastromark contains 175 micrograms of iron. Each milliliter also contains 1.4 milligrams of parabens as antimicrobial agents. The osmolality of the suspension is 250 mOsm; specific gravity is 1.01 grams per milliliter. The pH is 5.5 to 9.0, adjusted with sodium hydroxide.

The product is supplied in 360 mL bottles containing 300 mL of Gastromark. 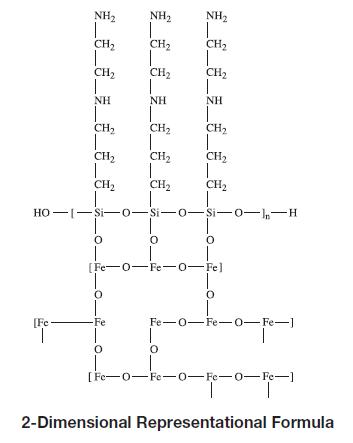 Pharmacokinetics
Absorption – Following the administration of 600 mL of Gastromark containing 10μCi of 59Fe (105 mg of iron) to 3 healthy, male volunteers and the same Gastromark dose containing 9.5μCi of 59Fe (105 mg of iron) to 3 male patients with inflammatory bowel diseases, the blood concentration of 59Fe in all subjects/patients for Days 1, 3, 7, and 14 after dosing were low (respectively, 0 to 0.024, 0 to 0.015, 0 to 0.058 and 0 to 0.044 nCi/mL). When normalized to a 70 kg man with 5000 mL of blood for Days 1, 3, 7, and 14 after dosing, these concentrations amount to 1.3%, 0.8%, 3.0% and 2.3% of the doses of 59Fe administered. This study is too small to reliably predict differences in absorption between healthy people and patients with inflammatory bowel disease. Absorption of Gastromark has not been studied in women.

Generally, the extent of absorption of iron from the gastrointestinal tract is expected to depend upon the existing body stores of iron. The lower the body iron stores, the more iron may be absorbed from Gastromark.

Distribution and Metabolism – Iron absorbed from Gastromark enters the hematopoietic pathway and is incorporated into the hemoglobin of the red blood cells or into ferritin for storage. The extent to which silicone is absorbed or metabolized in humans is not known.

Elimination – Unabsorbed iron in Gastromark is eliminated in feces. Based upon literature information, iron absorbed into the blood is highly conserved. In healthy normal adult men, about 10% of the body’s iron store is lost per year (1 mg per day). Iron is excreted from the gastrointestinal tract in extravasated red cells, in bile and in exfoliated mucosal cells. Small amounts of iron are lost in the urine and in desquamated skin. Additional iron loss occurs in menstrual flow in women.

Food Effect – Gastromark is intended for administration under fasting conditions. The effect of food on the disposition of Gastromark has not been studied.

Special Populations – Studies have not been conducted to evaluate the disposition of Gastromark in special populations such as patients with hepatic and renal diseases, or patients with hemochromatosis, hemosiderosis and other blood disorders.

The amount of iron absorbed in patients with active inflammatory bowel disease has not been studied adequately.

Drug-Drug Interactions – Drug interaction studies have not been conducted with Gastromark. The effect of iron supplements or drugs that increase or decrease gastrointestinal transit time on imaging with Gastromark has not been studied.

Of the above, 186 patients were enrolled in two identical clinical studies of 93 subjects each. Patients were referred for magnetic resonance imaging (MRI) and had known or suspected abdominal masses. Gastromark was evaluated for its ability to enhance the bowel and improve the definition of anatomic markings in the MRI. Confirmation of the final diagnosis for lesions external to the bowel was not obtained.

The presence or absence of mass lesions was further evaluated in a subset of 67 of the 186 patients (36%), 32 with pancreatic/gastric masses and 35 with possible bowel obstruction. For these patients, in comparison to MRls before Gastromark and depending upon the anatomic location, the visualized abnormalities on MRI images after Gastromark increased confidence excluding the mass in 31 to 41% of the patients; increased confidence in delineating the mass in 44 to 49% of the patients; and in 16 to 26% of the patients the information was not helpful. Confirmation of findings or MRI images judged normal after Gastromark was not obtained. Gastromark was not evaluated for the contribution of the Gastromark MRI to the final diagnosis or patient management.

Indications and Usage for Gastromark

Gastromark™ is indicated in adult patients for oral use with magnetic resonance imaging to enhance the delineation of the bowel to distinguish it from organs and tissues that are adjacent to the upper regions of the gastrointestinal tract.

Gastromark’s usefulness in the lower gastrointestinal tract and retroperitoneal region is limited (by transit time and dilution).

Gastromark is not recommended for iron supplementation.

Like other large volume oral contrast agents, Gastromark is contraindicated in patients with known or suspected intestinal perforation or obstruction.

Gastromark is contraindicated in patients with known allergy to its active or inactive ingredients.

The ingestion of Gastromark may cause abdominal pain, diarrhea, nausea and vomiting. In 78/256 (30%) of patients and normal volunteers, gastrointestinal adverse events occurred within the first 2 hours after ingestion of Gastromark. In 30/256 (12%), gastrointestinal events had their onset within 30 minutes. In 63/256 (24%), diarrhea occurred within 24 hours.

Vomiting can be associated with aspiration. Precautions should be taken to avoid aspiration.

The effects of Gastromark on human peritoneal tissues are not known. In animal studies, intraperitoneal injection of Gastromark was associated with a foreign body reaction that persisted for at least 30 days.

Gastromark is associated with nausea, vomiting, diarrhea, and abdominal cramping. In patients who have these symptoms before Gastromark, the symptoms may increase in severity. This could confound the ability to distinguish adverse effects of Gastromark from the signs and symptoms of obstruction or perforation, and from the pre-existing conditions.

Patients who have a current or recent history of hiatal hernia, esophageal reflux, nausea, vomiting, or abdominal pain may not be able to tolerate Gastromark. Studies have not been conducted in these patients.

Gastromark should be given with caution to patients who cannot tolerate large fluid shifts and who are on specific fluid intake requirements.

The safety of Gastromark in patients with inflammatory bowel disease has not been well studied.

Diagnostic procedures that involve the use of contrast agents should be carried out under the direction of a physician with the prerequisite training and a thorough knowledge of the procedure to be performed.

Patients receiving Gastromark should be instructed to inform the physician and technologist if they are pregnant or nursing. Patients should be informed that:

Gastromark is prescribed for gastrointestinal tract enhancement during MRI.

Gastromark can cause significant nausea, vomiting, diarrhea or abdominal pain, and other intestinal discomfort. In patients who have these symptoms before ingesting Gastromark, the symptoms might increase in severity.

Drug interactions were not studied in the clinical trials.

Gastromark contains iron oxide. Although iron absorption from Gastromark is low, the extent of gastrointestinal absorption of any available elemental iron from Gastromark is expected to depend upon the patient’s existing iron stores. The lower the body iron stores, the more iron will be absorbed from the GI tract. The iron may change serum measurements of iron, iron binding,
transferrin, ferritin, and other studies which reflect iron metabolism. In patients with iron deficiency anemia, the extent to which the iron absorption may affect supplemental or parenteral iron dosing requirements is not known (see CLINICAL PHARMACOLOGY section for details on iron absorption).

Eosinophilia was noted in patients who received Gastromark.

Long-term animal studies have not been performed to evaluate the carcinogenic potential of Gastromark. Gastromark was not found to cause genetic toxicity in the Ames test, in a chromosome aberration assay in CHO cells, in the CHO/HGPRT forward mutation assay, or in an unscheduled DNA synthesis assay in isolated rat hepatocytes. Gastromark has not been evaluated for potential to impair fertility.

Reproduction studies have been performed with Gastromark dosed by iron content. During gestation in rats and rabbits respectively, doses were up to 52.5 mg Fe/kg and 26.25 mg Fe/kg (respectively about 17 and 8 times the dose for a 50 kg human on a mg/kg basis, and 8 and 2.5 times on a mg/m2 basis). Maternal toxicity was not observed and these doses were not associated with evidence of harm to the fetus. Adequate and well-controlled studies have not been conducted in pregnant women. Because animal reproduction studies are not always predictive of human response, this drug should be used during pregnancy only if clearly needed.

Safety and effectiveness of Gastromark in children and adolescents below the age of 16 years have not been established.

Gastromark was evaluated in 256 patients and normal volunteers in clinical trials. Of these, 147 (57%) had at least one adverse event. Deaths did not occur during the study period of 7 days. In 15/256 (6%) patients, the ingestion of Gastromark was either interrupted or stopped because of vomiting or because they could not ingest any more fluid. One normal volunteer had prolonged abdominal cramping for 4 hours. One patient had post-operative ileus 2 days after ingesting Gastromark.

The following table of adverse events is based upon clinical trials with Gastromark in 256 subjects.

In the safety database of 256 people, the type of events was similar in people of each gender and in patients and healthy volunteers. The sample size was too small to determine whether there is any association of adverse events to body weight. However, for nausea and diarrhea, as shown in the following table, the rate of adverse events was much higher in women, both in patients and in volunteers.

Overdose has not been reported with Gastromark. If overdose occurs, it is likely that the toxicity would be related to iron, volume intolerance, or allergic-hypersensitivity reactions.

Gastromark should be taken after fasting at least 4 hours.

Before use, the bottles should be shaken vigorously for at least 1 full minute to assure uniform suspension of contents. Chilling before ingestion improves palatability. Any unused portion should be discarded.

Imaging: After ingestion of Gastromark, imaging may begin immediately. Generally, optimal results occur within 30 minutes. In some patients, delayed images (4 to 7 hours after ingestion) may be useful in delineating the lower gastrointestinal regions.

Gastromark is supplied in boxes of twelve bottles each.

Gastromark is a trademark of Mallinckrodt Inc.

Storage: Store at controlled room temperature or refrigerate between 2° to 25°C (36° to 77°F). Protect from freezing. The product should be discarded if frozen.

Before use, shake vigorously for at least one full minute.

Store between: 2° to 25°C (36° to 77°F)
May be stored at controlled room temperature or refrigerated. Do not freeze. Discard product if frozen. 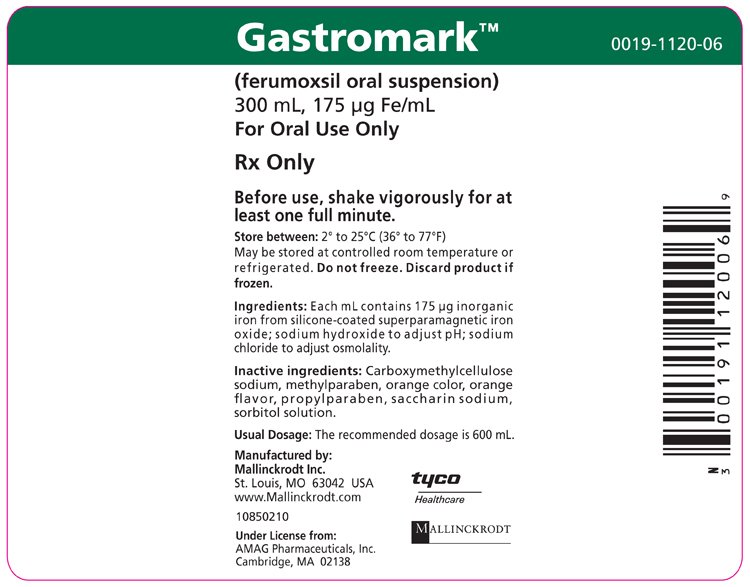