Gallium Citrate Ga 67 Injection is supplied in a 10 milliliter vial as an isotonic, sterile, non-pyrogenic solution. Each milliliter of the isotonic solution contains 74 megabecquerels (2 millicuries) of gallium Ga-67 on the calibration date as a complex formed from 8.3 nanograms gallium chloride Ga-67, 1.9 milligrams of sodium citrate dihydrate, 7.8 milligrams of sodium chloride and 0.9 percent benzyl alcohol (v/v) as a preservative. The pH is adjusted to between 5.5 to 8.0 with hydrochloric acid and/or sodium hydroxide solution. 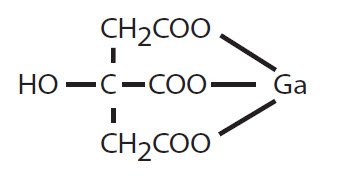 Gallium Ga-67 with a physical half-life of 78.26 hours1decays by electron capture to stable zinc Zn-67. Photons that are useful for imaging studies are listed in Table 1.

The specific gamma ray constant for gallium Ga-67 is 1.6 R/mCi-hour at 1 cm. The first half-value thickness of lead (Pb) is 0.066 cm. A range of values for the relative attenuation of the radiation emitted by this radionuclide that results from interposition of various thicknesses of lead is shown in Table 2. For example, the use of 1.2 cm of lead will decrease the radiation exposure by a factor of about 100.

To correct for physical decay of this radionuclide, the fractions that remain at selected time intervals after the time of calibration are shown in Table 3.

Gallium Citrate Ga 67, with no carrier added, has been found to concentrate in certain viable primary and metastatic tumors as well as focal sites of infection. The mechanism of concentration is unknown, but investigational studies have shown that gallium Ga-67 accumulates in lysosomes and is bound to a soluble intracellular protein.

It has been reported in the scientific literature that following intravenous injection, the highest tissue concentration of gallium Ga-67 - other than tumors and sites of infection - is the renal cortex. After the first day, the maximum concentration shifts to bone and lymph nodes and after the first week, to liver and spleen. Gallium Ga-67 is excreted relatively slowly from the body. The average whole body retention is 65 percent after seven days, with 26 percent having been excreted in the urine and 9 percent in the stools.

A thorough knowledge of the normal distribution of intravenously administered Gallium Citrate Ga 67 Injection is essential in order to accurately interpret pathologic states. The finding of an abnormal gallium Ga-67 concentration usually implies the existence of underlying pathology, but further diagnostic studies should be done to distinguish benign from malignant lesions. Gallium Citrate Ga 67 Injection is intended for use as an adjunct in the diagnosis of certain neoplasms as well as focal areas of infection. Certain pathologic conditions may yield up to 40 percent false negative gallium Ga-67 studies. Therefore, a negative study cannot be definitely interpreted as ruling out the presence of disease.

Lymphocytic lymphoma frequently does not accumulate gallium Ga-67 sufficiently for unequivocal imaging and the use of gallium with this histologic type of lymphoma is not recommended at this time.

Gallium Ga-67 localization cannot differentiate between tumor and acute inflammation, and other diagnostic studies must be added to define the underlying pathology.

The vial contents are sterile and non-pyrogenic. It is essential that the user follow the directions carefully and adhere to strict aseptic procedures.

Radiopharmaceuticals should be used only by physicians who are qualified by training and experience in the safe use and handling of radionuclides produced by nuclear reactor or particle accelerator and whose experience and training have been approved by the appropriate government agency authorized to license the use of radionuclides.

No long-term animal studies have been performed to evaluate carcinogenic or mutagenic potential or whether this drug affects fertility in males or females.

Ideally, examinations using radiopharmaceuticals, especially those elective in nature of women of childbearing capability, should be performed during the first few (approximately ten) days following the onset of menses.

This drug is known to be excreted in human milk during lactation, therefore, formula feedings should be substituted for breast feedings.

Safety and effectiveness in pediatric patients below the age of 18 have not been established.

Rare occurrences of allergic reactions, skin rash and nausea have been reported in association with Gallium Citrate Ga 67 use.

Approximately 10 percent of the administered dose is excreted in the feces during the first week after injection. Daily laxatives and/or enemas are recommended from the day of injection until the final images are obtained in order to cleanse the bowel of radioactive material and minimize the possibility of false positive studies.

Studies indicate the optimal tumor to background concentration ratios are often obtained 48 hours post injection. However, considerable biological variability may occur in individuals and acceptable images may be obtained as early as 6 hours and as late as 120 hours after injection.

The patient dose should be measured by a suitable radioactivity calibration system immediately prior to administration.

Parenteral drug products should be inspected visually for particulate matter and discoloration prior to administration. Do not use if contents are turbid.

Instructions for the handling of Gallium Citrate Ga 67:

The estimated absorbed radiation doses2from an intravenous injection of 185 megabecquerels (5 millicuries) of Gallium Citrate Ga 67 are shown in Table 4.

How is Gallium Citrate Ga 67 Supplied

Gallium Citrate Ga 67 Injection is supplied sterile and non-pyrogenic for intravenous use. Each milliliter contains 74 megabecquerels (2 millicuries) of gallium Ga-67 on the calibration date, as a complex formed from 8.3 nanograms gallium chloride Ga-67, 1.9 milligrams of sodium citrate dihydrate, 7.8 milligrams of sodium chloride, and 0.9 percent benzyl alcohol (v/v) as a preservative. The pH is adjusted to between 5.5 to 8.0 with hydrochloric acid and/or sodium hydroxide solution.

Gallium Citrate Ga 67 Injection is available in vials containing the following amounts on the calibration date.

The contents of the vial are radioactive, and adequate shielding and handling precautions must be maintained. Store at controlled room temperature 20° to 25°C
(68° to 77°F) [see USP].

Storage and disposal of Gallium Citrate Ga 67 Injection should be controlled in a manner that is in compliance with the appropriate regulations of the government agency authorized to license the use of this radionuclide.

Curium and the Curium logo are trademarks of a Curium company.
©2018 Curium US LLC. All Rights Reserved.

Each mililiter contains 74 MBq (2 mCi) Gallium Citrate Ga 67 (essentially carrier free) at date and time of calibration, as a complex formed from 8.3 ng gallium chloride Ga 67, 1.9 mg sodium citrate dihydrate, 7.8 mg sodium chloride, and 0.9% (v/v), benzyl alcohol as a preservative. Sodium hydroxide or hydrochloric acid are added for pH adjustment. The pH is between 5.5 and 8.0.

For information on dosage, administration and indications see package insert.

WARNING: Radioactive drugs must be handled only by qualified personnel in conformity with regulations of the U.S. Nuclear Regulatory Commission or state regulatory agencies where applicable. Bottle containing drug should be kept in this container or within heavier shield.

Manufactured by:
Curium US LLC
Maryland Heights, MO 63043
Made in USA