Indications and Usage for Digifab

General Guidelines:
Adjust the dosage of Digifab according to the amount of digoxin to be neutralized.

Failure of the patient to respond to Digifab should alert the physician to the possibility that the clinical problem may not be caused by digitalis toxicity.

Methods for calculating a neutralizing dose of Digifab, based on a known or estimated amount of digoxin or digitoxin in the body, are provided below. When using the dose calculation methods provided, the following guidelines should be considered:

Calculation for Ingestion of Known Amount:

If, after several hours, toxicity is not adequately reversed, or appears to recur, additional administration of Digifab at a dose guided by clinical judgment may be required.

Table 2 gives dosage estimates in number of vials for adult patients for whom a steady-state serum digoxin concentration is known. The dose of Digifab (in number of vials) represented in Table 2 can be approximated using the following formula:

Calculation Based on Steady-State Digitoxin Concentrations:

The dose of Digifab for digitoxin toxicity can be approximated by using the following formula (which differs from Formula 2 in the denominator due to a 10-fold decrease in the volume of distribution of digitoxin as compared to digoxin).

If in any case, the dose estimated based on ingested amount (Formula 1) differs substantially from that calculated based on the serum digoxin or digitoxin concentration (Formulas 2 and 4), it may be preferable to use the higher dose estimate.

There are no known contraindications to the use of Digifab.

Suicidal ingestion may result from more than one drug. Toxic effects of other drugs or poisons should not be overlooked, especially in cases where signs and symptoms of digitalis toxicity are not relieved by administration of Digifab.

Patients with poor cardiac function may deteriorate secondary to the withdrawal of the inotropic action of digoxin by Digifab. If needed, provide additional support by using other intravenous inotropes such as dopamine, dobutamine or vasodilators. However, take additional care not to aggravate the digitalis induced rhythm disturbances. Postpone re-digitalization, if possible, until the Fab fragments have been eliminated from the body, which may require several days, and patients with impaired renal function may require a week or longer.

If an anaphylactic reaction occurs during the infusion, terminate Digifab administration at once and administer appropriate treatment. Balance the need for epinephrine against its potential risk in the setting of digitalis toxicity. Patients with known allergies to sheep protein are particularly at risk for an anaphylactic reaction, as are individuals who have previously received intact ovine antibodies or ovine Fab.

Do not administer Digifab to patients with a known history of hypersensitivity to papaya or papain unless the benefits outweigh the risks and appropriate management for anaphylactic reactions is readily available. Prior treatment with digoxin-specific ovine immune Fab carries a theoretical risk of sensitization to ovine serum protein and possible diminution of the efficacy of the drug due to the presence of human antibodies against ovine Fab. To date, there have been no clinical reports of human anti-ovine immunoglobulin antibodies causing a reduction in binding of ovine digoxin immune Fab or neutralization response to ovine digoxin immune Fab.

Use of Digifab in Renal Failure

The elimination half-life of Digifab in renal failure has not been clearly defined. Monitor patients with severe renal failure who receive Digifab for digitalis toxicity for a prolonged period for possible recurrence of toxicity.

Monitoring of free (unbound) digoxin concentrations after the administration may be appropriate in order to establish recrudescent toxicity in renal failure patients. 5

Digifab may interfere with digitalis immunoassay measurements. Thus, standard serum digoxin concentration measurements may be clinically misleading until the Fab fragments are eliminated from the body. This may take several days or a week or more in patients with markedly impaired renal function. Therefore, serum samples for digoxin concentration should be obtained before Digifab administration, if at all possible. Such measurements would establish the level of serum digoxin at the time of diagnosis of digitalis intoxication.

At least 6 to 8 hours are required for equilibration of digoxin between serum and tissue, so absorption of the last dose may continue from the intestine. Therefore, serum measurements may be difficult to interpret if samples are drawn soon after the last digitalis dose.

The total serum digoxin concentration may rise precipitously following administration of Digifab, but this will be almost entirely bound to the Fab fragment and therefore not able to react with receptors in the body.

In the clinical trials of Digifab, 6 of 15 patients in the digoxin overdose study had a total of 17 adverse events. Three events occurred in one patient and consisted of the following: pulmonary edema, bilateral pleural effusion and renal failure. The events were determined to be likely due to the loss of digoxin inotropic support in combination with the patient’s underlying medical condition. Of 8 healthy volunteers who received Digifab, two experienced an adverse reaction that was considered to be related to Digifab. The reactions were; one episode of phlebitis of the infusion-site vein and one episode of transient postural hypotension.

Safety data in pediatric population is limited. The pediatric dosing estimation is based on calculations for adult dosing.

Specific studies in elderly patients have not been conducted. Of the 15 patients given Digifab for digoxin toxicity in one clinical trial, the average age of all patients was 64 years and over half of the patients (8 of the 15) were 65 years of age or older. The oldest patient studied was 86 years old. There is no evidence that the efficacy of Digifab would be altered due to advanced age alone; however, elderly patients have a higher chance of having impaired renal function and therefore should be monitored more closely for recurrent toxicity (See 5.3 Use of Digifab in renal failure).

The final product is prepared by isolating the immunoglobulin fraction of the ovine serum, digesting it with papain and isolating the digoxin-specific Fab fragments by affinity chromatography. These antibody fragments have a molecular weight of approximately 46,000 Da.

The product contains no preservatives and is intended for intravenous administration after reconstitution with 4 mL of Sterile Water for Injection USP.

Digifab has an affinity for digoxin in the range of 109 to 1010 M-1, which is greater than the affinity of digoxin for its sodium pump receptor, the presumed receptor for its therapeutic and toxic effects. When administered to the intoxicated patient, Digifab binds to molecules of digoxin reducing free digoxin levels, which results in a shift in the equilibrium away from binding to the receptors, thereby reducing cardio-toxic effects. Fab-digoxin complexes are then cleared by the kidney and reticuloendothelial system.

The pharmacokinetics and pharmacodynamics of Digifab were assessed in a randomized and controlled study of Digifab and Digibind® (n=8) or Digibind® (n=8). The objective of the pharmacokinetic and pharmacodynamic study was to compare parameters for Digifab to those for Digibind®. and Digibind®, respectively) indicate considerable penetration from the circulation into the extracellular space and are consistent with previous reports of ovine Fab distribution, as are the elimination half-life values (15 hours and 23 hours for Digifab and Digibind®, respectively).8-12 The elimination half-life of 15-20 hours in patients with normal renal function appears to be increased up to 10 fold in patients with renal impairment, although volume of distribution remains unaffected.12

The primary outcome measure for this study was the serum level of free (unbound) digoxin. The results demonstrated that both products reduced the level of free digoxin in the serum to below the limit of assay quantitation for several hours after Fab administration. Cumulative urinary excretion of digoxin was comparable for both products and exceeded 40% of the administered dose by 24 hours. These results demonstrate that Digifab and Digibind® have equivalent pharmacodynamic effects on the digoxin parameters that are relevant to the treatment of digoxin toxicity.

Animal carcinogenicity and reproduction studies have not been conducted with Digifab.

No toxic effects were observed when Digifab was administered to healthy male Sprague Dawley rats in equimolar doses sufficient to neutralize a 1 mg/kg dose of digoxin. In these studies, the physiologic changes produced by toxic serum concentrations of digoxin were ameliorated rapidly by the administration of Digifab or comparator product Digibind®. Statistically equivalent responses were observed with both Digifab and Digibind® to the following variables: PTQ index, heart rate, mean arterial pressure, ventilation, arterial blood gases, and serum potassium concentrations.

One prospective multi-center safety, efficacy and pharmacokinetic study in patients presenting with life-threatening digoxin toxicity was conducted in U.S. and Finland.

The objective of the study was to demonstrate safety, pharmacokinetics, and clinical response of Digifab in patients. Results were compared to historical data on Digibind ®. Fifteen patients received doses of Digifab based on its theoretical binding capacity for digoxin, and based on the known amount of digoxin ingested or on blood concentrations of digoxin at the time of admission.

Serum free digoxin concentrations fell to undetectable concentrations in all patients following Digifab administration. Ten of the 15 patients studied who had baseline ECG abnormalities improved within 4 hours after the Digifab infusion. The remaining 5 patients who had baseline ECG abnormalities remained unchanged throughout the 24-hour assessment period, and in one case through the 30-day follow up period. Seven out of the 15 patients (47%) studied had complete resolution of digoxin toxicity within 4 hours of Digifab administration, and 14 patients (93%) were classified as having resolved their digoxin toxicity by 20 hours. In this study, where 2/15 patients had serum available for human anti-ovine antibody determination, there was no measurable immune response.

Digifab is supplied as a carton that contains 1 vial of product (diluent not included).

Advise patients to contact their physician immediately if they experience any signs and symptoms of delayed allergic reactions or serum sickness (e.g., rash, pruritus, urticaria) after hospital discharge.

Manufactured for
and distributed by: 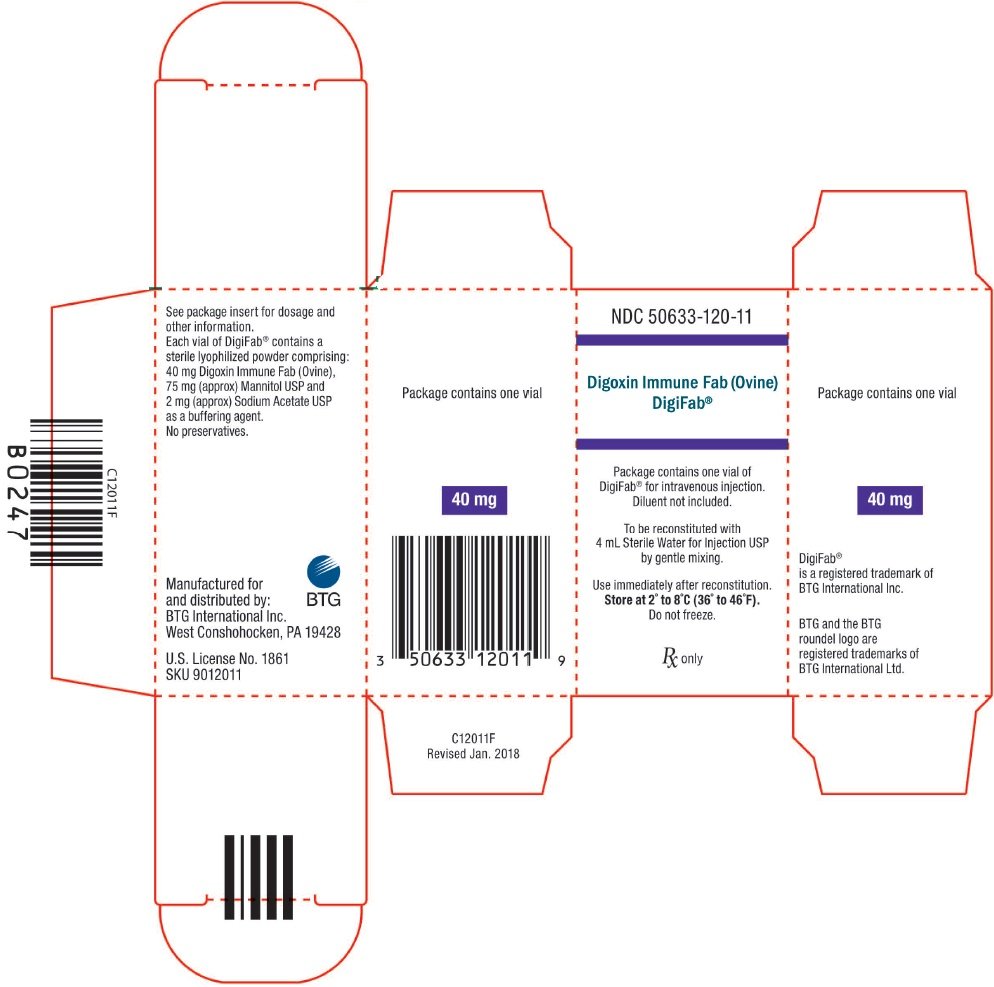